One of the reasons I preferred the iPhone 6 Plus to the iPhone 6 was battery life. It would last two days if I was careful. That’s useful if you ever find yourself away from a plug socket for any length of time, or if – like me – you take a lot of long-haul flights.

The iPhone 6S Plus’ battery life is on a par with its predecessor, even though the battery is a smidge smaller in size.

In normal day-to-day use I have regularly found myself leaving the office with more than 60% of battery life remaining. That’s having used it for several hours browsing the internet using 4G, watching videos on catch-up apps and making calls and texts.

In fact, I managed more than six hours of screen-on time with a single charge with the display at a little over half brightness – I found this an acceptable level indoors, but you’d need to up the brightness when out and about on a sunny day.

The test included three hours of Netflix streaming over Wi-Fi (24% battery decrease), 1.5 hours of browsing (19% decrease), over an hour or so of 3D gaming (22% decrease), 150 Live Photos with 20 minutes of 4K video (20% decrease) and half an hour of listening to some tunes on Spotify (4% decrease). The rest of the battery was with the phone idle or waiting on a homescreen.

As you can see, there’s plenty you can do with the iPhone 6S Plus before it leaves you stranded – and it certainly lasts longer than the smaller iPhone 6S.

In our like-for-like test, the 6S Plus had 12% battery remaining after it’s little brother had gone to bed. That might not sound like much, but it means a full hour and a half of video streaming and 100 photos – that’s not to be sniffed at. 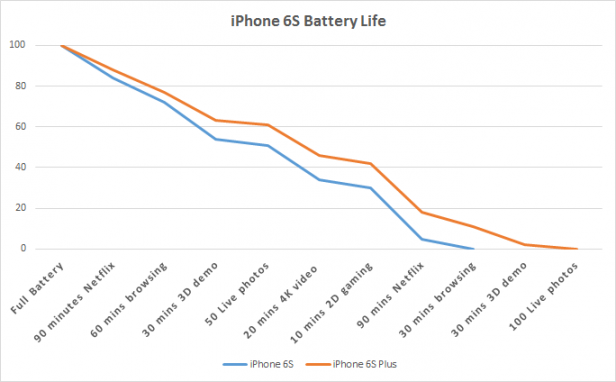 I also found that the 6S Plus lasted longer than the Samsung Galaxy S6 Edge+ phablet I reviewed recently, although it was a close-run contest.

iOS 9 brings a battery-saver mode to the iPhone 6S Plus, which helps you to eke out a few extra hours. You can turn it on yourself at any time via Settings, or it pops you a message to turn on when your battery hits 20%.

Battery-saver mode does plenty to help conserve battery life. First, it turns off all background activity from apps, and reduces the time your screen stays on when idle to just 30 seconds.

It also throttles the speedy processor’s performance. I’ve found this to be a bit of an issue on the iPhone 6 Plus – the phone isn’t as smooth or as fast as it is without battery saver turned on.

Thankfully, there are no such problems with the iPhone 6S Plus – I haven’t noticed any slowdown at all. In fact, running benchmarks in battery-saver mode shows that the 6S Plus is still as fast as last year’s model running at full pelt.

Battery saver does make a difference to the iPhone 6S Plus’ stamina. With it on all day, I’ve found battery life is extended by around 20%, depending on the type of activity for which the phone is used.

Finally, it’s worth mentioning fast-charging. Present in many newer handsets, the technology gives you the ability to charge your phone, in some cases, in less than an hour. The iPhone 6S Plus doesn’t offer the feature, so it takes closer to two hours to get the battery from 0 to 100%.

Should I buy the iPhone 6S Plus?

If you’re not a fan of more sizeable phones then you should forget about the iPhone 6S Plus – they don’t get much bigger than this. You’d be better off considering the 4.7-inch iPhone 6S (below) instead.

However, if the larger form factor isn’t an issue for you then the iPhone 6S plus is an excellent phone and one that I fully recommend. 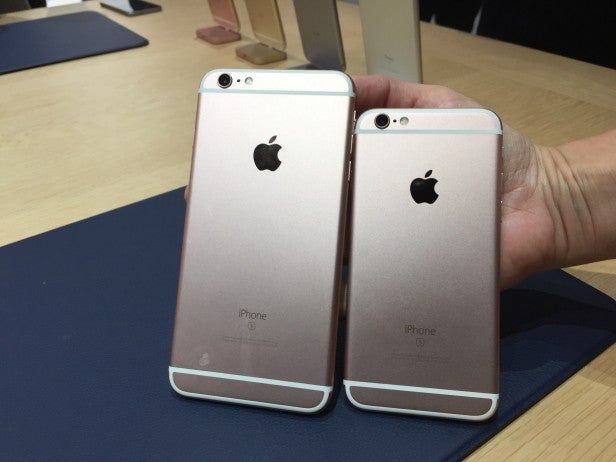 In the past, I’d often shied away from recommending an upgrade from an iPhone to its “S” version. With the iPhone 6S Plus, however, that’s changed.

3D Touch and improvements to the camera and performance make this a worthwhile upgrade even from last year’s model, and it’s leagues ahead of the iPhone 5S and those before it.

The iPhone 6S Plus is an expensive phone – like every previous iPhone  – but it isn’t bad value. As a brand, iPhones retain their value well and Apple’s customer service is second to none – points worth considering when making a purchase.

I’ve already mentioned some of the other options. The LG G4 offers a great camera and screen and costs far less than the 6S Plus, although it lacks its design cachet.

The Samsung Galaxy S6 Edge+ is the other obvious candidate alongside the the Galaxy Note 5 is (although it’s not officially available in the UK). The former looks better than the 6S Plus and has benefited from a significant reduction in price recently. However, it lacks some of the ground-breaking features of Apple’s handset.

If there were ever any doubts over Apple’s ability to innovate following the passing of Steve Jobs then 3D Touch emphatically quashes them. The iPhone 6S Plus is a touch of genius, even if it is a little larger than it needs to be.