What is the iPhone 5S?

Apple’s iPhone is one of the most popular and highly anticipated smartphones in the world. Whether you love or hate Apple, the original iPhone revolutionised the way we view and use our phone and, at one time, was the only smartphone you would consider buying.

These days there are a whole host of manufacturers that create great smartphones, from Sony to LG and HTC to Nokia, while Samsung has sold hundreds of millions of its Galaxy series, led by the Samsung Galaxy S4.

Launched alongside the more price conscious iPhone 5C, the iPhone 5S is Apple’s latest attempt to reclaim its ‘king of phones’ crown. It’s more than twice as fast as its predecessor and comes with an improved camera and a brand new feature none of its competitors can match.

Whether you’re an Apple fan or an Android aficionado we go in-depth to reveal whether the iPhone 5S and the new iOS7 update is all it’s cracked up to be. 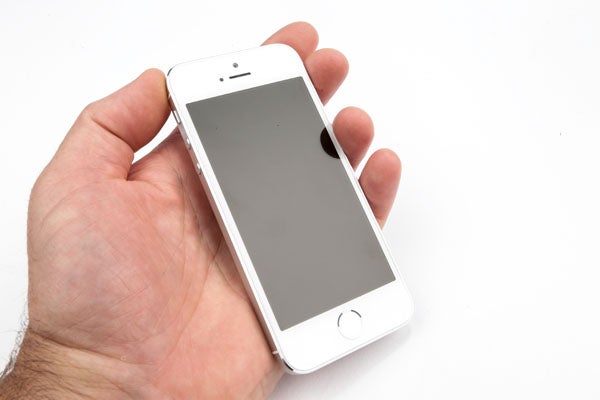 The iPhone 5, launched last year, arrived with a 4-inch screen and diamond cut aluminium body. As is Apple’s way with its S phones, the iPhone 5S shares the same design. At first glance it looks identical, but there are some small changes in the colour options, as Apple has added the much sought after gold option, while the ‘black’ is now a lighter ‘space grey’. The silver and white one we have, however, is exactly the same.

It’s an angular, timeless design – elegant and slim. In hand the cut aluminium feels premium and solid, but the iPhone 5S is far lighter than most other phones. At just 112g it initially feels a little too light, especially if you’re used to the iPhone 4S’s glass and metal body. However the build is excellent and the 5S certainly doesn’t feel flimsy the way some lighter phones can. 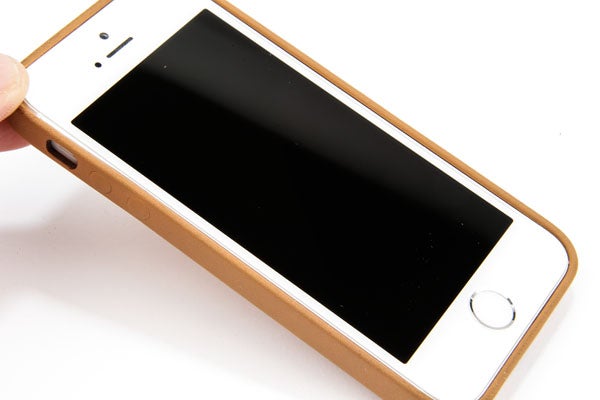 The highly engineered body feels quality, but it isn’t the most comfortable. The diamond cut edges are a little sharp, not sharp enough to cause any real discomfort but slightly more rounded edges would make it easier to hold for long periods of time.

However, iPhone 5S is thin and light enough to easily warrant a case, whether it’s the pricey £35 leather case Apple announced with it or a third-party one. Using the leather case significantly softens the phone and makes it much more pleasurable to hold.

A double LED flash is next to the camera while on the front the screen bezels are slim. The home button is detailed in a metal ring that provides a useful function, the Touch ID – more on that later.

All buttons are instantly accessible using one hand without having to ever juggle the phone. The one difference it has from most other phones is that the 3.5mm headphone jack is at the bottom. It’s a little odd at first, but actually makes sense when you consider that a phone goes top first into a pocket so you don’t have to flip it round when you take it out.

As a 4-inch phone the iPhone 5S is significantly smaller than all its direct Android and Windows 8 competitors. Deciding whether the smaller screen is a benefit or weakness will depend entirely on you and whether you value screen real-estate over ease of use.

Samsung has managed to keep the Galaxy S4 as tidy as possible, but its 5-inch screen means that it is more of a handful and it can be tricky to reach some areas of the screen when used one-handed. The 4.7-inch screen on the HTC One is slightly more manageable. 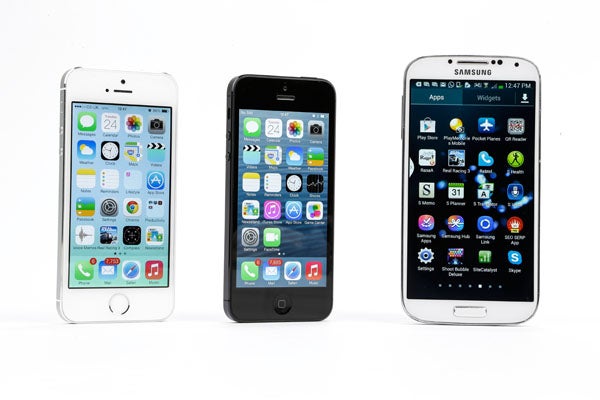 From left to right: the iPhone 5S, iPhone 5 and Samsung Galaxy S4

While the iPhone 5S trails behind this competition in terms of sheer size you might find it much more comfortable to use day-to-day if you have average sized hands. It also tends to fit in a pocket easier.

So the 5S looks likes its predecessor, but that’s where the similarities end .

We’ve already mentioned that the iPhone 5S has an ace up its sleeve. It is a finger-print scanner called Touch ID, discreetly integrated into the metal ring around the iPhone 5S’s menu button.

This could easily have been a gimmick, a feature that offers a lot of marketing potential with little functional use, like the back buttons on the LG G2.

Thankfully Apple has made no mistake with it, just the way Sony has managed to crack waterproofing a phone with the Xperia Z1.

Initially you need to set up your fingers or thumbs to be recognised. This takes around 30 seconds and involves tapping the button repeatedly while the complex contours of your fingerprints are mapped. You can add up to five fingers, whether they’re all your own or someone you want to share access with. 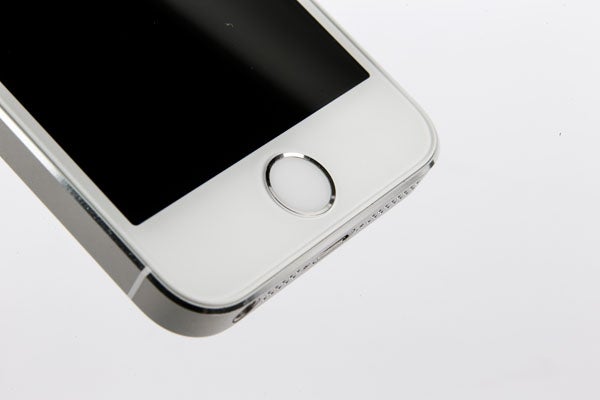 The key thing Apple has managed to achieve with Touch ID is flawless execution. It’s easy to forget that your phone is locked at all when a tap of the home button to wake the iPhone 5S also unlocks it.

If you never lock your phone then you’ll have little use for Touch ID, other than to authorise app purchases. Even if you do lock your phone you might think tapping a four digit PIN or drawing a symbol is not too much of a barrier to access. However, once you experience the ease of Touch ID it’s hard to not become a convert.

Aside from the fact it works so well (even when you turn the phone upside down the iPhone 5S unlocks without a hitch) it is far more secure than a four digit PIN or symbol. A fingerprint is yours and yours alone. While there is a way for the very determined to copy your fingerprints, it’s highly unlikely to be worth the effort. You also can’t forget your fingers!

Fingerprint scanning leads us to a source of quite appropriate concern. No-one wants Apple to have millions of fingerprints on a massive database somewhere, no matter how well protected. Regular news and rumours about how the NSA and other governmental organisations demand, and are given, user information from companies brings trickles of sweat to even the most innocent and blasé.

So how has Apple combated the concern of iPhone 5S fingerprint databases falling into the wrong hands? In quite a simple way, they don’t keep any. Fingerprint scans are encrypted and stored locally only. In other words only on the iPhone 5S – in one secure section of the CPU, not in the user accessible memory.

If you’re extremely security conscious or have highly sensitive data on your phone then fingerprint locking alone may not be enough. It’s here that Apple could have upped the security ante by allowing the option of dual-factor authentication – supporting the option of finger-print unlocking with a PIN. We hope this will be an option in future iOS updates.

The bottom line is Touch ID is not an industrial grade security measure, but that’s fine. It is more secure than a four digit PIN and means you don’t have to constantly input your iTunes password to make purchase, two things that make it a more than worthwhile addition.

The iPhone 5S has kept faith with the highly responsive 16:9 Retina-display 4-inch screen of its predecessor. The display offers a resolution of 1,136 x 640 with 326ppi. On paper it falls behind the 400ppi 1080 Super AMOLED screen on the Samsung Galaxy S4 and even further behind the 468PPI on the HTC One. To the human eye, however, there’s very little in it, and the iPhone 5S is pin sharp and text looks crisp at all levels of zoom. 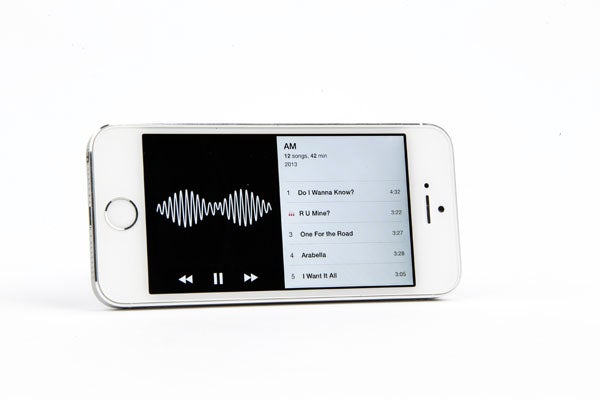 Regardless of the lack of iterative display improvements the iPhone 5S has one of the best screens on the market. Set it to maximum levels and it is a lot brighter than the other two, as well as offering better colour accuracy and a less ‘saturated’ look than the Samsung Galaxy S4.

Apple has also managed to remove a layer during the screen production process. This means that the images are not recessed but in fact almost appear to float on the glass. The effect is even more striking when combined with the new iOS7 parallax wallpapers that shimmer under the icons as the 5S is moved.

Where the screen of the iPhone 5S falters a little is with low-light video and images. Shady scenes are not quite as dark as they could be and blacks not as deep.

However, if there was one thing Apple could afford to retain from the iPhone 5 it was the screen. Considerations on whether it is right for you should centre around its size rather than quality. Is 4-inches big enough and do you intend to multi-task on a phone?

There have been some iOS 7 improvements to help with multitasking but you still won’t be able to have two apps open on-screen at the same time. What you can do is double press the home button. This offers up a preview list of open apps, lets you dismiss them by flicking up, scroll through multiple pages if it’s a browser or just easily flip from one app to another.

This is just one of the new features on the iPhone 5S, but there’s a lot more to iOS 7.