Is the iPhone 11 Pro the fastest Apple flagship?

Along with powering basic day-to-day functionality, the brand-new A13 chipset enables features like 4K60fps video capture, improved battery life and many of the updated Smart HDR functions.

It’s a very fast phone in both regular use and gaming. Apps open quickly, even the most intensive of games run without dropping frames and tend to load quicker than their Android counterparts.

See below for a look at how the iPhone 11 Pro performs in a range of benchmarking tests.

Geekbench is one of the most well-known benchmarking tools for giving a general overview of how well a phone’s performance ranks. As with all benchmarking scores, they don’t necessarily mean a phone will be an excellent performer. 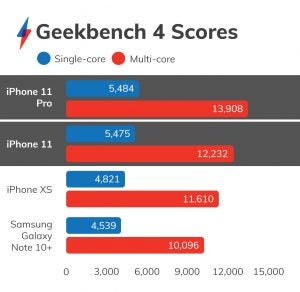 Results given by Geekbench comprise of scores for single-core and multi-core performance. Apple has previously excelled in both these areas, especially single-core, and that’s once again the case here with the iPhone 11 Pro sitting at the top of the charts.

AnTuTu is a generalist benchmark that synthetically tests everything from gaming performance to video and picture editing to scrolling through social media. 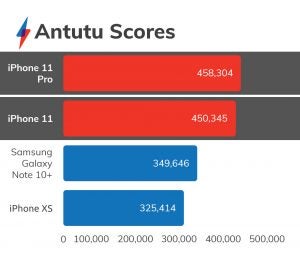 As is the case with Geekbench, the iPhone 11 Pro tops the charts when compared to other 2019 flagship phones. 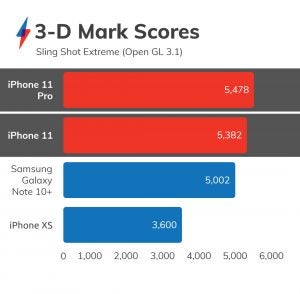 3DMark’s Sling Shot benchmark focuses on checking a phone’s GPU performance. Here you can see the big improvement in the GPU over the iPhone XS and even the Galaxy Note 10 Plus.