What looks like a small update on the surface has actually turned out to be an impressive year for the iPhone line. The 11 Pro Max is a great phone thanks to tremendous battery life, a camera array that’s as versatile as anything else on the market and a big screen that makes it a joy to play games on. Of course, all that comes at a price – and this is a seriously expensive phone. Unless you simply must have an OLED display, ultrawide camera and a flashier finish, the regular iPhone 11 might just be a better buy.

If you want the biggest, longest-lasting Apple flagship of 2019 then the iPhone 11 Pro Max is the phone you want.

This is a true brute of a phone and the size means it’s certainly not for everyone. Thankfully the feature set here is just about identical to the iPhone 11 Pro, so you can really choose whether you want a smaller or larger phone without sacrificing anything.

In this review, I’ll be focussing on what the 11 Pro Max has over its smaller sibling. If you want a more general look at the 11 Pro series take a read of our iPhone 11 Pro review where I go into detail on the excellent camera, design and performance. If you’re after something a little lighter on the wallet then read our iPhone 11 review.

The iPhone 11 Pro Max is a big phone. It’s weightier than the iPhone XS Max and stands as the heaviest iPhone Apple has ever made. If you want a dainty device this isn’t for you, the extra weight is immediately noticeable, even if you’re coming from an older Plus or Max phone.

With all that being said, I don’t mind it. The added weight gives the device a satisfying heft and it feels reassuring. Apple has strengthened the glass on both the front and back – using the new dual-ion exchange, as Apple calls it – and made it capable of withstanding being submerged in 4m of water for 30 mins.

Even with this ‘stronger’ glass, I’d still put a case on the 11 Pro Max. The mixture of stainless steel rim and glass give it a delicate feel that I wouldn’t be confident of surviving a drop. 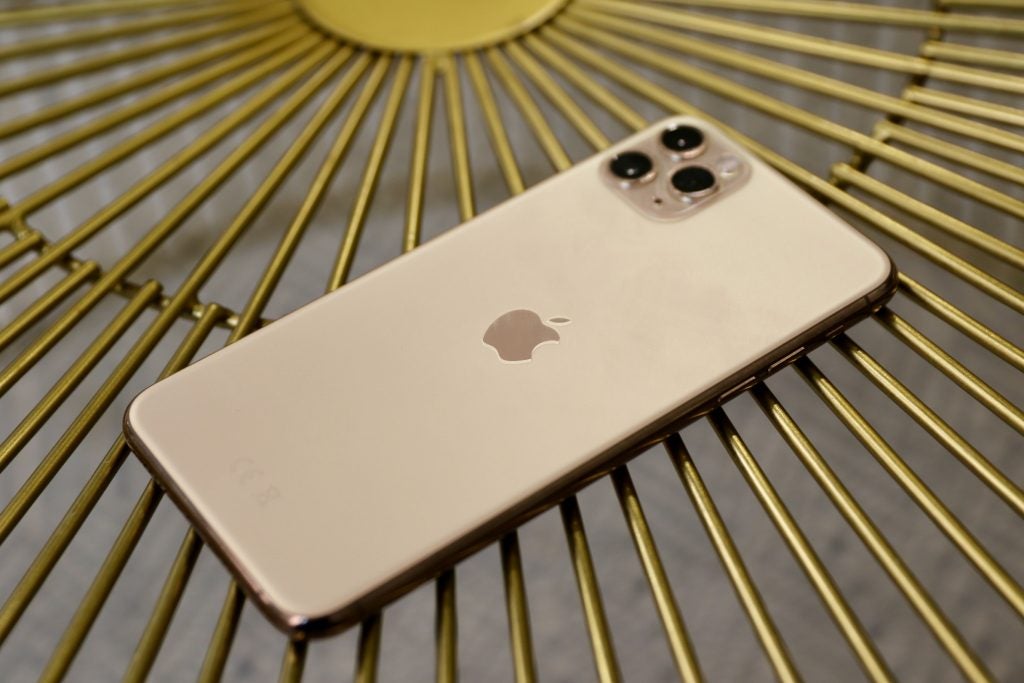 Apple has stuck with a familiar design for the 11 Pro series and around the front things look identical to the XS and X. The notch remains, there’s no home button and the bezel is perfectly the same size all around.

Flip the phone over the changes are a bit more apparent. There’s a new frosted, matte finish that gives way to a larger camera hump. While I love the new feel of the back – even if it’s marginally slippier than before – the camera is housing is certainly an acquired taste.

It looks a lot better in person than in pictures and it’s far less bulbous than I had originally thought. The cameras do stick out a bit though, so you can’t type with the phone on the table without it wobbling all over the place.

The 6.5-inch OLED display on the iPhone 11 Pro Max is a thing of beauty. It packs mostly the same specs as the regular 11 Pro (the resolution is slightly different owing to the larger size, however the 458ppi remains the same) but the bigger size makes it much better for watching movies and playing games.

Apple’s name for this display is Super Retina XDR and that XDR branding – which was previously used on the high-end Pro Display XDR – seems to refer to the boost in brightness this phone has over previous iPhones. In certain circumstances, none of which are replicable in our tests, the screen can boost to 800 nits in bright, sunny weather and even further to 1200 nits when you’re playing back HDR content from places like Netflix or iTunes. What I can attest is to is just how gorgeous Dolby Vision movies look on this display. Scenes from Blade Runner 2049 and John Wick 3, especially those in those in the dark, look bright and vivid. 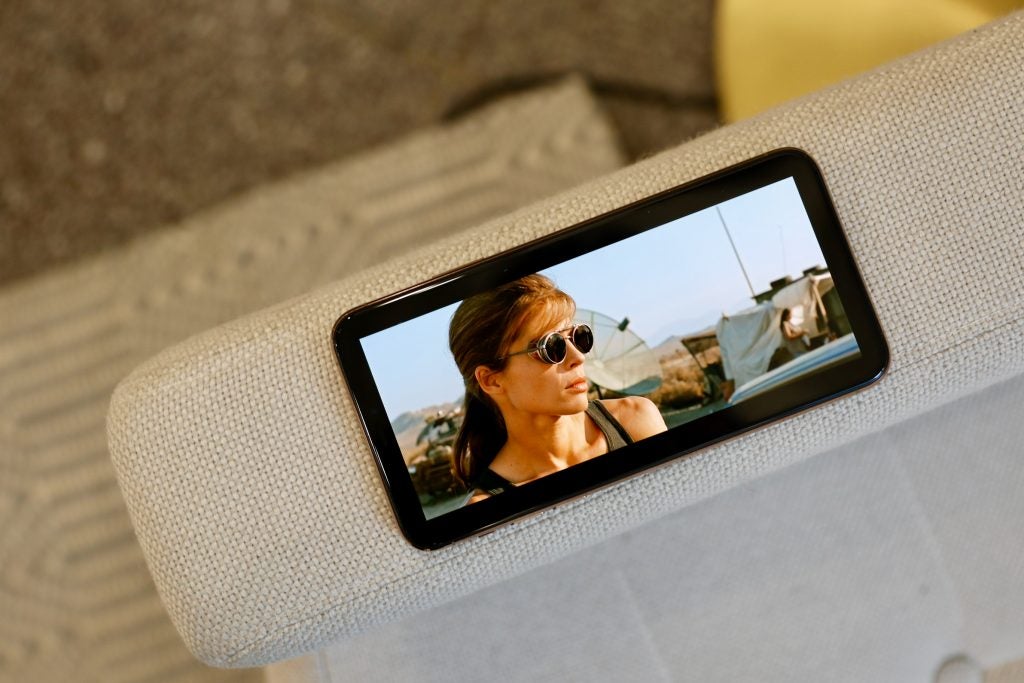 There are a couple of issues, though. It would really have lived up to that Pro tag if Apple had taken the ProMotion tech from its iPad Pro series and shifted it to the OLED display here. ProMotion is an adaptive refresh rate trick that alters how fast the display refreshes each second, upping it to 120Hz (double the typical 60Hz) when required to give it a much smoother look. Having it here would have made it even better.

The screen is also still defined by the notch, which hides the front camera (among other sensors) and juts out just a little bit too much. I didn’t mind the notch a few years when the iPhone X came out, but with Android makers shrinking notches – or getting rid of them entirely – it feels a bit outdated here.

Apple’s largest current iPhone is also the longest-lasting – and it’s among the best phones out there for easily getting you through the day and into the next. Considering neither iPhone XS model particularly overwhelmed me with their endurance, this is a huge step in the right direction.

It finally feels like Apple has stopped the trend of making things thinner and lighter and sacrificing battery life in the process. The iPhone 11 Pro Max is thicker and heavier than the XS Max but I would take the comforting thought of knowing it’ll virtually impossible (unless you’re purposely trying to) to deplete the cell in a single day.

There’s even a fast 18w USB-C plug in the box that’ll juice the phone up in roughly 100-110 minutes. That’s still slow compared to something like the Huawei P30 Pro or OnePlus 7T Pro, however it’s a lot faster than the old 5w chargers you’d get with all previous iPhones.

Apple has long held the finest ecosystem around. The App Store, iMessage, Apple Pay, and the way the phones worked in conjunction with a user’s Mac, made it very hard to leave once you’d got yourself caught up in it. I’d say the decision to leave is now even tougher than ever as Apple’s impressive push with services continues.

You can now add Apple Arcade, Apple Music (which is constantly improving with excellent editorial content and impressive radio offerings), Apple News Plus and the Apple TV Plus streaming service to that list.

While not all of these are hits – Apple News Plus in the UK is lacking content – the absolute gem of content that is Apple Arcade (and its very reasonable £4.99/$4.99 a month price) makes the iPhone a great place to play some of the best mobile games.

You also should feel fairly confident your phone will last comfortably for a number of years, recieving the latest iOS updates along the way. The A13 Bionic chipset and reported 4GB RAM inside the 11 series consistently tops our benchmarking charts and there doesn’t seem to be any task it doesn’t churn through with ease. That extra power will hopefully come into its own a few years down the line. 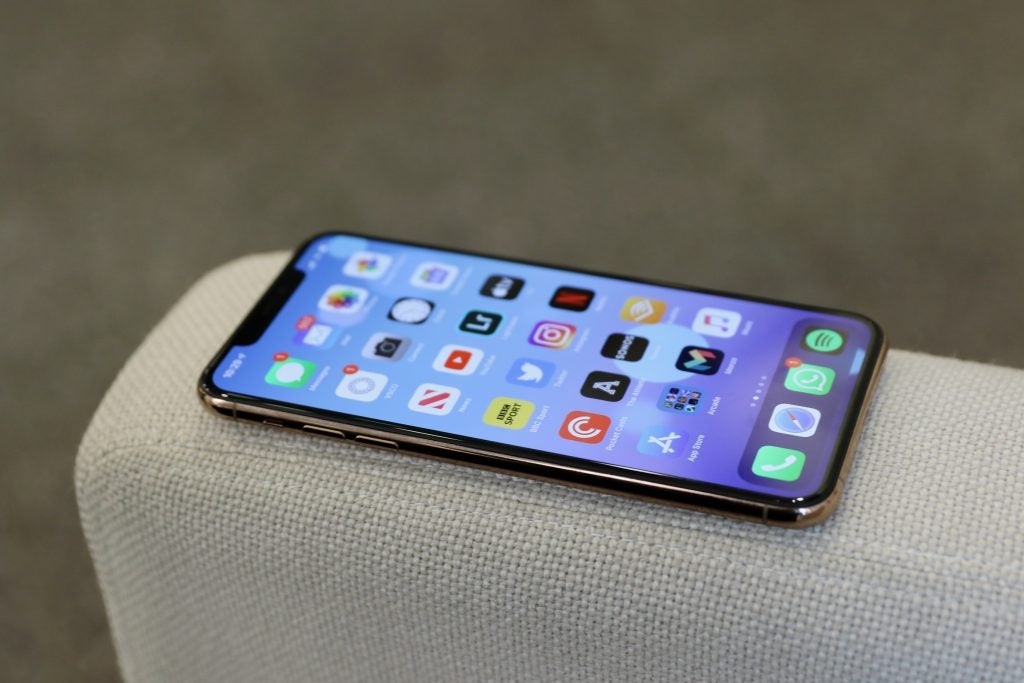 Storage sizes remain an iPhone issue, and I don’t think even someone who lives their life majoritively in the cloud will be happy with the 64GB option. At least the jump up takes you to 256GB and you can go as high as 512GB if you want.

iOS 13 got off to a rocky start and there has already been a number of updates to try and iron out the vast array of bugs that didn’t get quashed during the beta period. iOS 13.1 sorted lots of the issues, reducing the number of app crashes and forced restarts I noticed during my first few weeks with the phone.

Bugs aside, iOS 13 is a good update. Dark Mode looks great on the big OLED panel and little extras, like the volume reading no longer taking up the entire screen, have been a long time coming. Apps like Photos, Reminders and Music have also received much-appreciated redesigns.

There might be a lack of 5G here, but at least other networks services on the phone are impressive. Everything from call quality to signal strength is great, and there’s support for latest WiFi 6 standard.

We have already reviewed in serious depth the excellent camera array on the back of the iPhone 11 Pro and the triple camera setup here is exactly the same. 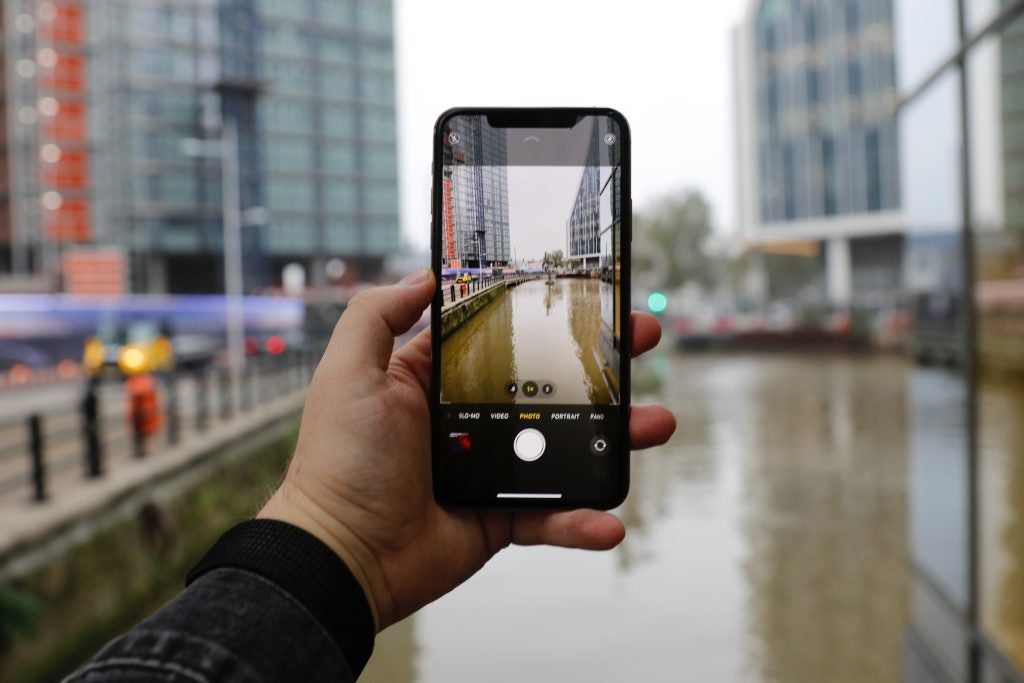 Flip the phone over and you’ll find three distinct 12-megapixel cameras. These consist of an ultra-wide angle lens (13mm equivalent, f/2.4), a standard lens (26mm, f/1.8) and a 2x telephoto lens (52mm, with an improved maximum aperture of f/2.0). These three cameras work together to offer a versatile system that shoots some truly fantastic photos. 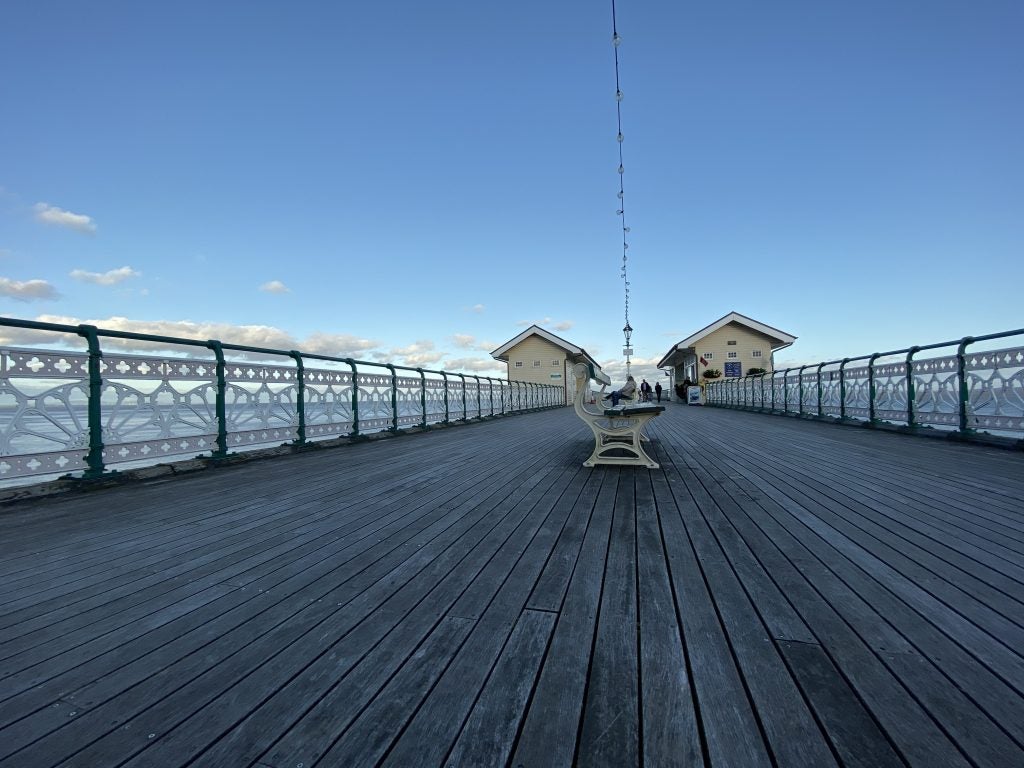 The true strength of the iPhone’s camera is how well the three cameras are calibrated to churn out similar photos. Whether you shoot up-close with the 2x zoomed telephoto or zoom out and use the telephoto, the colour processing across all three is very similar and this lets you move between the three with ease.

Of course, the main 12MP sensor is where the best snaps come from. Apple’s Smart HDR feature has been seriously improved this year and the results are sharp, colourful and consistent. I have been shooting with both the iPhone 11 Pro Max and the Google Pixel 4 and the difference is minimal; sometimes I prefer the iPhone’s attempt and other times the Pixel wins out. Considering how far ahead the Pixel was in 2018 it is impressive at what Apple has done this time around. 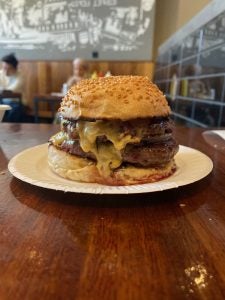 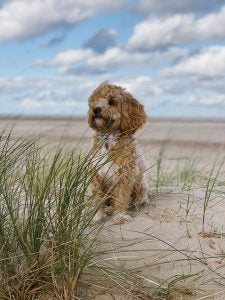 The portrait mode is good, but not quite as accurate at cutting around details as the Pixel 4 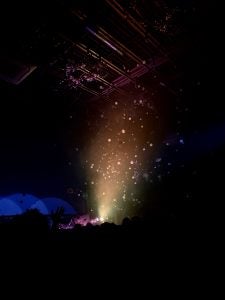 Night Mode is a new addition for the iPhone 11 series and it’s something I have been wanting on an iPhone since Huawei showed how good it can be with the P20. The iPhone 11 Pro Max’s take on this mode comes on automatically when the light is low and can’t be manually flipped on and off. While I really like not having to worry about flipping to the mode when it’s dark, sometimes I did wish – especially when the light is fading but not completely gone – to have that manual option as a backup.

Night Mode works by shooting a number of short exposures then combining them together to produce a finished image that’s brighter and clearer than a single exposure. The iPhone 11 Pro Max will decide for itself how many seconds to shoot for, but you can use a slider to take control of it. If you attach a tripod you will see the mode jump to the maximum number of seconds.

Video recording has long been one of the iPhone’s biggest strengths and it remains easily the best on any phone you can buy. We’ve got a load more video samples and thoughts on our iPhone 11 Pro camera page so head there for all the details about this camera.

Should I buy the iPhone 11 Pro Max?

What looks like a small update on the surface has actually turned out to be an impressive year for the iPhone line. The 11 Pro Max is a great phone thanks to tremendous battery life, a camera array that’s as versatile as anything else on the market and a big screen that makes it a joy to play games on.

Of course, all that comes at a price. This is a seriously expensive phone and unless you simply must have an OLED display, ultrawide camera and a flashier finish the regular iPhone 11 might just be a better buy.

Big, bulky and certainly not for everyone – but if you’re willing to pay the high asking price you’re getting one of the best phones around with impressive battery life and a fantastic camera.