The IOTTY Smart Switch looks fantastic and has responsive manual controls, but the fiddly app that times out regularly gets in the way.

What is the IOTTY Smart Switch?

There are a lot of smart light bulbs on the market, but relatively few smart light switches. It’s a shame in many ways, since light switches remain a part of our homes, and smart ones not only add features but they tend to look great, too. It’s nice to see the IOTTY Smart Switch, then, which brings smarts to a nice-looking physical control.

However, a slightly flaky app and a few connection problems somewhat take the shine off the final product.

There’s a lot to love about the IOTTY Smart Switch; it’s one of the nicest-looking light switches I’ve seen. The product is available in black or white, and there are options for single (£69.99) and two-gang (£89.99) units. The website also lists a three-gang version, although it isn’t currently available in UK stores. All models are simple on/off switches.

With a glass finish to all of the switches, the Smart Switch looks every inch the high-end device that it is. Cleverly, there’s a controllable backlight on each switch, so you can have the Smart Switch lit up in dark areas, such as hallways, but leave the light off in the bedroom, for example.

All IOTTY Smart Switches require a neutral cable at the light switch. If you’re in a new build home or want to install one in a recent extension, you’ll have the right cables; older homes tend not to have this.

If you don’t have a neutral cable, you’ll want to look at another product, such as the Lightwave Generation 2 products. These smart light switches are all dimmers; when you turn them “off”, they actually maintain a small current through them to maintain power to the switch. The main advantage of doing things the IOTTY way is that you don’t need dimmable bulbs and the switches will work with all bulbs.

Installation of the IOTTY Smart Switch is fairly straightforward, but you need to get a fixed live into two parts of the socket, which may mean rejigging your wiring slightly.

In my home, the light socket I used has three cables coming in, with subsequent lights wired through the switch. Getting everything into the compact terminals at the back of the light switch was hard work, since they’re comparatively small. I also found it quite difficult to get the light switch back into the pattress box, as the IOTTY Smart Switch is fairly deep at 32.5mm. Once powered on, the IOTTY Smart Switch can be connected to your wireless network for smart control. This involves joining the Smart Switch’s wireless network first, then joining it to your home network. You’ll need to have a decent wireless signal where you put the light switch, but the upside is that you don’t need yet another hub.

Switches can be organised into rooms to make finding the one you want more convenient. Once installed, the light switch can be operated manually with a tap to turn it on or off. If you want to do more, then you can use the app instead. 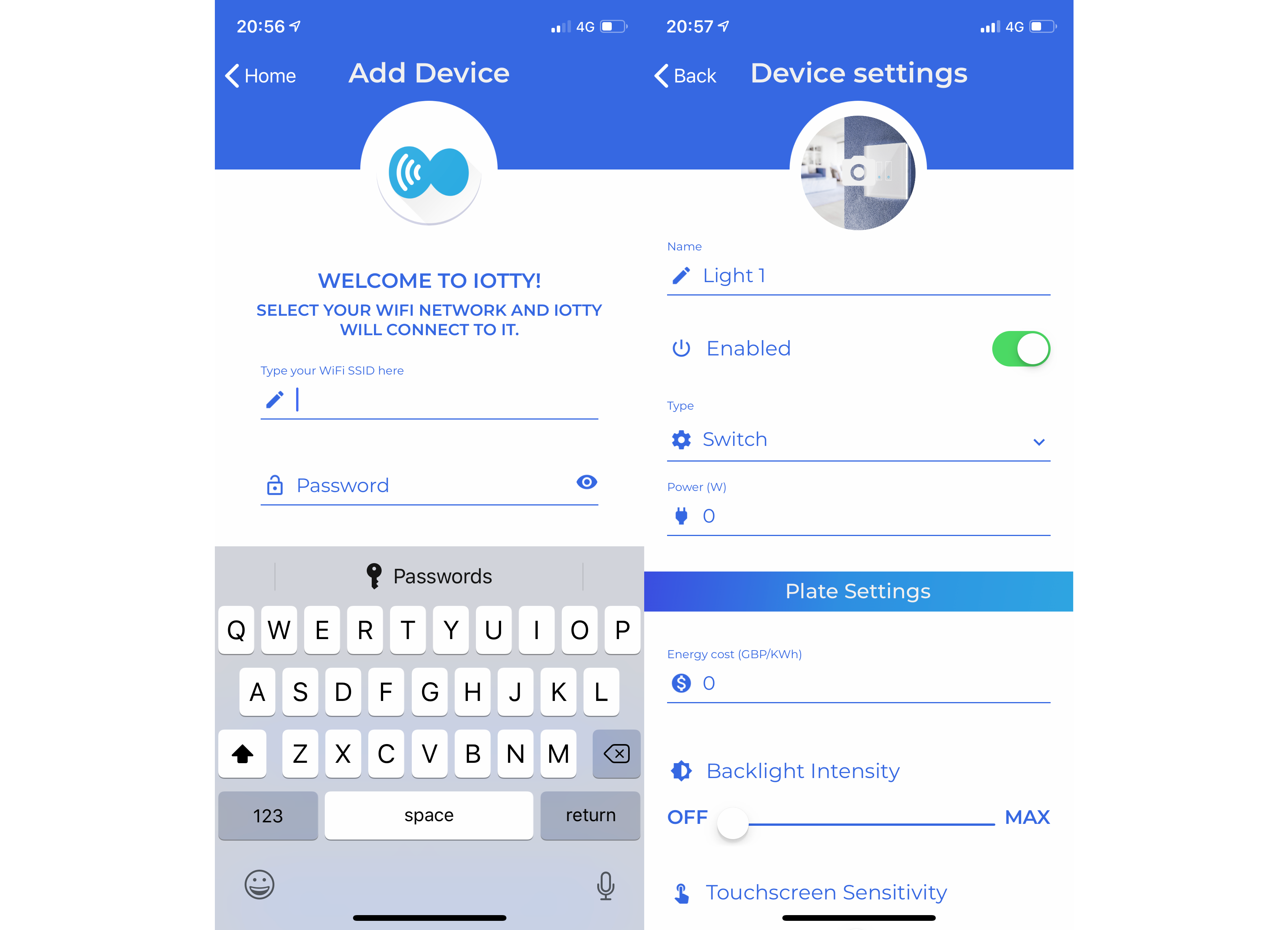 As well as basic control, the app opens up more advanced features, including the option to adjust the light’s backlight. Given how bright it is, I recommend turning off the backlight in bedrooms and rooms where you don’t want to be disturbed, but leave it on in hallways and other communal areas of your home.

Scenes let you set a light switch (or multiple switches) to specific settings, which includes turning them on or off, or adjusting the brightness of the backlight. 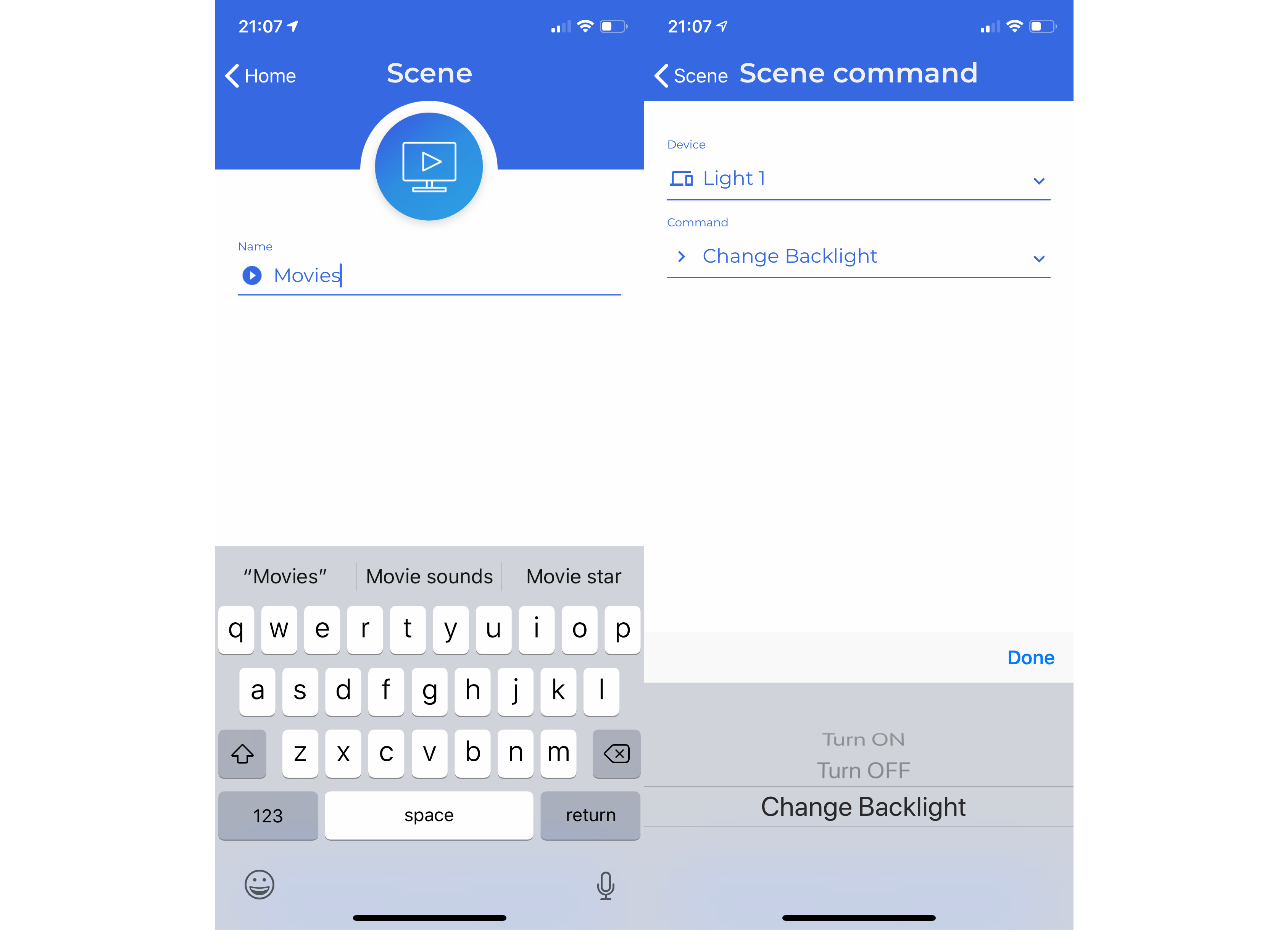 Automations makes things happen automatically. There are plenty of triggers, including running Automations at sunrise or sunset, when the weather changes or at a specific time. You can also link devices together, so turning on one Smart Switch, for example, can turn on another switch. This feature is great if you have multiple lights in one room controlled by different switches. You can also use multi-way to link multiple IOTTY devices – say, turning on the bedroom light using the switch downstairs. Geolocation is neat to see, so you can have your lights turn on or off when you go out or return home, for example. Automations can run a specific command, or you can trigger a scene, reusing your work.

If you go away, the special Away mode is useful: this will turn your lights on and off randomly to simulate occupancy and scare off would-be burglars.

The IOTTY Smart Switch supports both Amazon Alexa and the Google Assistant. With only simple on/off controls, the skills are both very simplistic: they only let you turn a light on or off. Still, what more could you want? I tested on both Alexa and Google and found both systems to be reliable, responding quickly to requests.

It’s a shame that there’s no IFTTT channel to control your lights automatically via other devices, such as turning on a light when your security camera picks up movement.

Tap the front of the IOTTY Smart Switch and the corresponding light goes on and off instantly. In this regard, these light switches are as good as a regular switch. I did have an initial problem where the light switch wouldn’t respond to my touch and I had to turn the power off and back on to get it working. Once the Smart Switch was connected to Wi-Fi, I didn’t have that problem.

Things start to go a bit wrong when the app is involved. For starters, I had a problem where the control to turn a switch on or off would just disappear. Even when it’s on screen, it’s fiddly to use because you have to tap the light bulb icon; tap the switch and you get its settings. When the control was on screen, the switch turned on and off quickly. 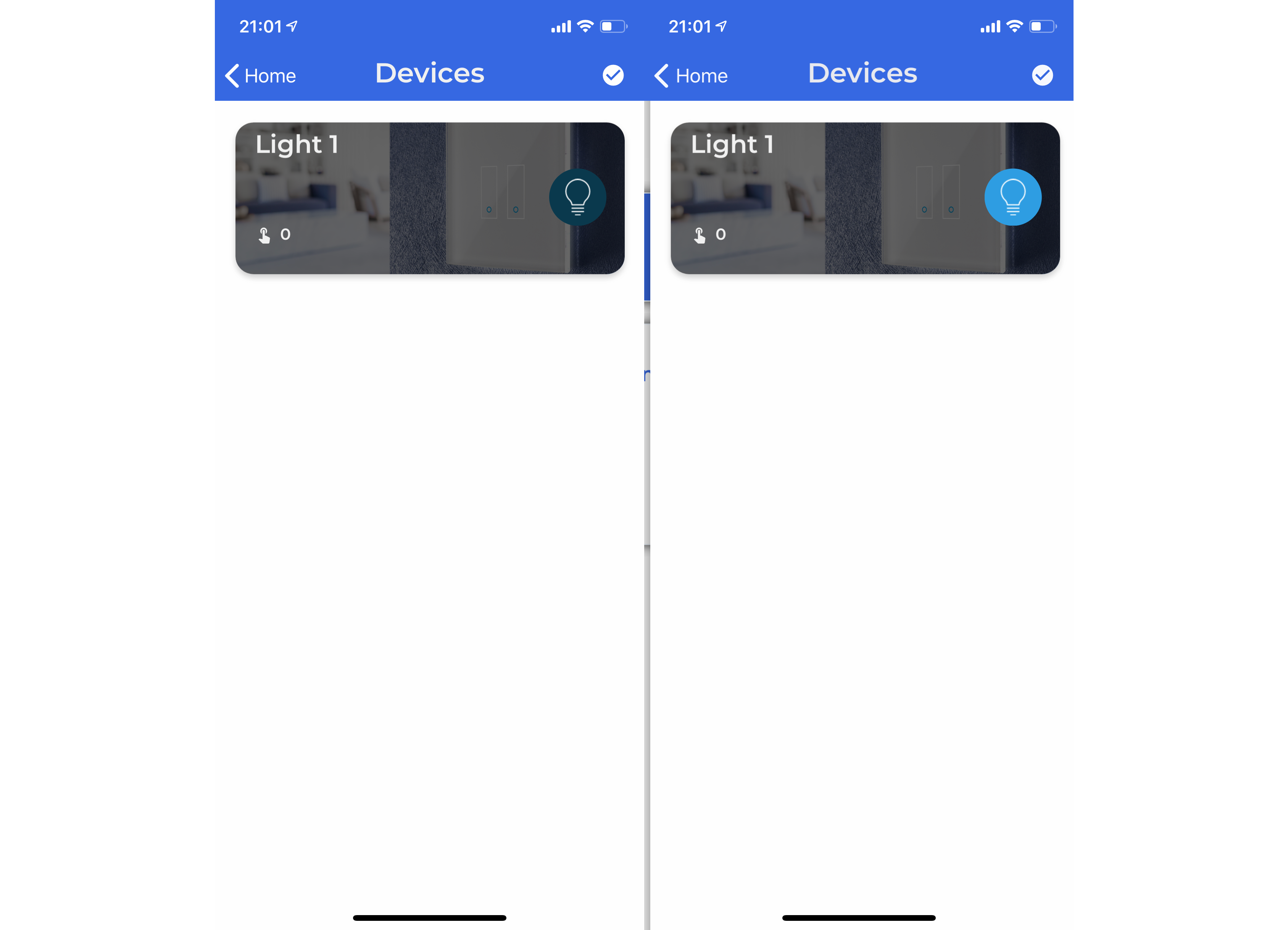 Changing settings is also a pain. Trying to alter the backlight, for example, I kept receiving an error message saying that the operation had timed out – even though the change had clearly been made. 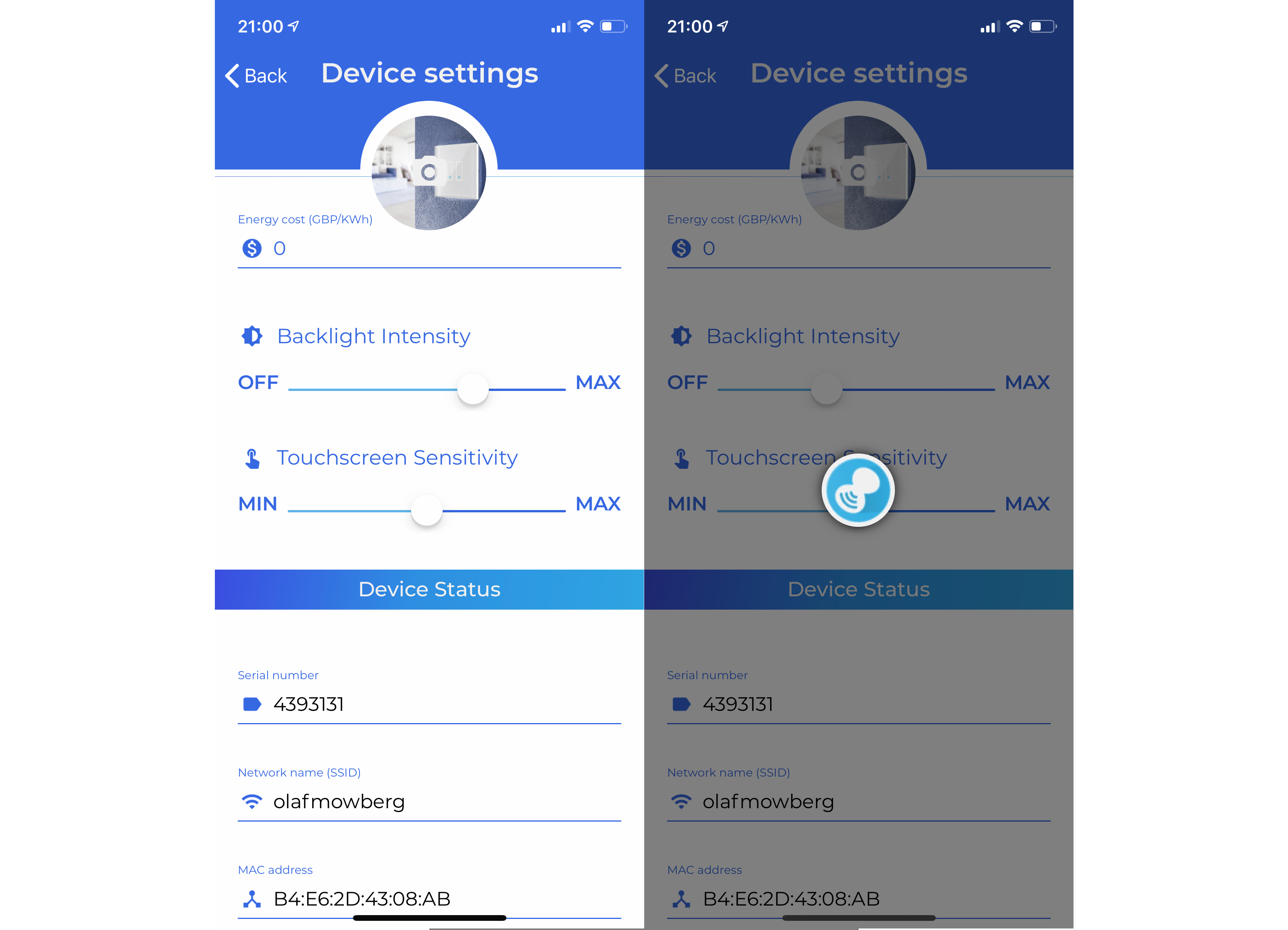 Although the app isn’t likely to be the main way that you use the product, it needs some work to make it more intuitive and responsive.

Why buy the IOTTY Smart Switch?

In terms of style, the IOTTY Smart Switch is excellent. It’s the kind of product that makes a room look better, and it’s certainly an upgrade on old white-plastic switches. The requirement to have a neutral wire makes sense and, to be honest, UK homes are a little out-of-date wiring-wise unless you have a newer property.

All that said, it’s the smart part that lets the side down. The app is fiddly and I found that it frequently timed out, making it frustrating to use. Given these issues, going with Philips Hue bulbs or the Lightwave Generation 2 system will provide a greater number of features and better control.