Synology NAS boxes have rightly gained a reputation for being user friendly and the ioSafe 214 enjoys the same benefits. You simply plug in the 214, connect it to a router, boot up and it will be detected on your network. Users can then go to find.synology.com where it will begin a browser based setup wizard requesting you set your password, shares and (optionally) RAID array.

With its Mac OS inspired UI the Synology Desktop Manager remains a joy to use and its powerful search almost instantaneously finds whatever you need, in a manner Windows 8 could learn from.

ioSafe doesn’t entirely piggyback off Synology’s software, though, as it deserves credit for its simple drive installation. Being so security focused, the ioSafe 214 isn’t a tool-less system, but the supplied allen key (which is magnetised for easy storage anywhere on the chassis) removes a single bolt for each drive.

Needless to say, the drive trays are also metal. However, they hold the drive with four Philips head screws when it would’ve been simpler to use the same allen bolts as the rest of the NAS to avoid requiring a separate screwdriver. 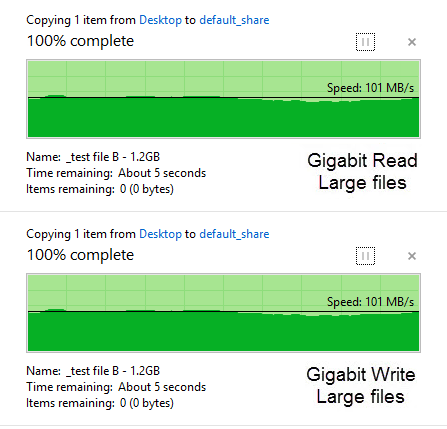 Having reviewed the reasonably fast Synology DS214play but not the more powerful DS214, which the ioSafe 214 is based upon, we weren’t sure what to expect. It turns out we were in for a treat.

Read performance of large files was superb hitting 101MBps (808Mbps) and, more surprisingly, it managed to match this for write performance as well. This is right on the limit of Gigabit Ethernet capacity so you can’t expect much better from a NAS without Link Aggregation, and results fall within a margin of error of the superb (and more powerful) DS414 – while destroying the disappointing Western Digital EX4. 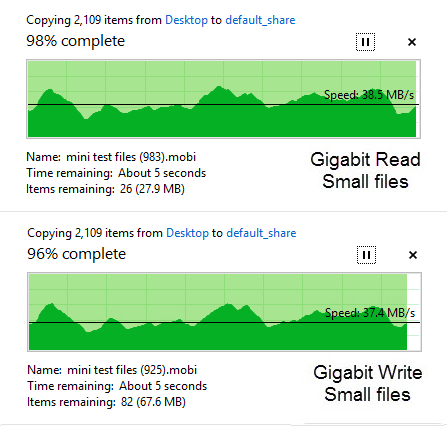 We were also surprised by the ioSafe 214’s performance handling small files. Transferring over 2,000 files from a 2TB folder is a real CPU tester, but the 214 managed excellent average read and write speeds of 38.5MBps (308Mbps) and 37.4MBps (299.2Mbps) respectively. This trails slightly behind the 44.2MBps (353.3Mbps) read performance of the ioSafe DS414 thanks to its 1GB of DDR3 RAM, but still almost doubles speeds of the EX4 and budget NAS like the Netgear ReadyNAS 102 and WD MyCloud.

A further pleasant surprise is the lack of noise. We measured the ioSafe 214 as producing 25-30db, which makes it largely inaudible at most times. Interestingly this seems to be a benefit of the extreme protection of the drives as with the drives exposed noise shot above 40db. 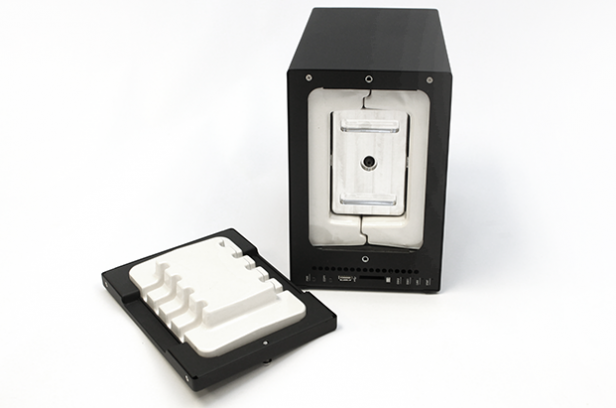 The obvious answer to this is: do you need to? A £579.99 RRP (available from £550 online) is almost double the asking price of Synology DS214, upon which it is based. The ioSafe 214 is also nearly 10 times the weight and double the size. It is essentially a NAS rebuilt as a safe.

Assuming you do require this level of security, though, buying the 214 is a no brainer. Considering the build materials, the price is good value and none of this ruggedising comes at the expense of speed or a compromised user experience. The 214 also has the pleasant side effect of being virtually silent thanks to all the drive insulation so it is as housetrained as it is disaster proof.

Being based on Synology’s class leading hardware and software gives the ioSafe 214 a flying head start, but it builds upon that with black box like drive protection that should satisfy the most paranoid of NAS owners. It is a shame the 214 lacks the failsafe of a second Gigabit Ethernet port, but pricing is fair and combined with exceptional performance and usability it is impossible not to recommend.

Next, check out our round-up of the best routers