The ION360 U is an easy way to capture 360-degree, VR-friendly footage using your phone and an add-on camera.

The package consists of a charging case and a camera attachment, and is compatible only with certain phones. At present, this officially includes the iPhone 7, iPhone 7 Plus, Samsung Galaxy S8 and Samsung Galaxy S8 Plus.

While it certainly simplifies the process of capturing 360-degree footage, the ION360 U only has limited modes compared to rivals and, all things considered, it’s pretty expensive.

I was sent the model for the iPhone 7, but the experience will be similar across all of the different models.

The first thing to be aware of is that, regardless of the model you’re using, the charging case is going to add some size and weight to your existing phone. If you already have an already quite hefty phone then with the INO360 U it’s going to be even more noticeable. The iPhone 7 model reviewed here adds an additional 108.8g of weight with the camera attached. 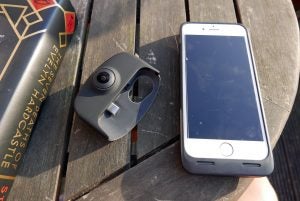 The need for a charging case is a different approach to a 360-degree add-on camera such as the Insta360 Nano, which simply plugs into an iPhone’s Lightning port. Of course, what you get with the ION360 U’s approach is an extra 1260mAh battery to help keep your phone ticking along. The case also powers the camera itself, so it isn’t draining your phone’s battery. 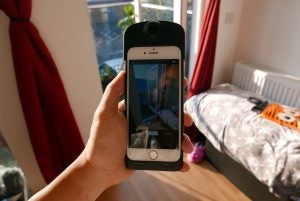 You can get about another half a day’s worth of battery with the case, and therefore isn’t adding a huge amount of stamina. I’m not entirely sold on the case, even if it feels like it adds a reasonable amount of protection. It makes my iPhone feel too bulky.

There’s an LED strip along the back with a button that can display the charge level. A micro-USB port on the bottom charges the case and your iPhone, so you’ll need to transition from using a Lightning cable to micro-USB to charge your device while in the case. 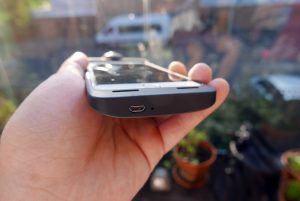 The camera attachment is like a hood that connects to the top of the case and attaches over USB-C. It clips on pretty firmly, but I did almost manage to lose it when I tried to put the whole assembly in my jeans pocket. Somehow it became detached, ending up on my seat before I noticed. As such, you’ll probably want to avoid having it attached permanently. A small pouch is included for transporting it.

Once you attach the camera, and turn it on via the small side button, you’re automatically prompted to open the companion app (or install it, if you haven’t already downloaded it).

The app itself is fairly basic, which means getting to image capture is straightforward. There are actually only three options at your disposal: video, still image and live streaming via Facebook or YouTube. 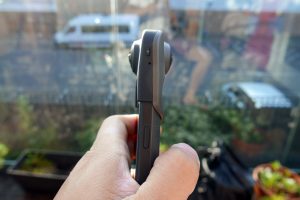 There aren’t any adjustable viewing or capture modes. One of the more fun elements of 360-degree capture is playing around with ‘Tiny Planet’ style modes that distort and wrap the image, so you look like a giant stood on a tiny sphere. There’s nothing like that here, or any filters – or anything particularly fun.

All you can do is take a video of  your surroundings in a single, rather dull way. 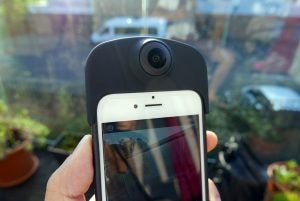 As for image quality, all consumer VR cameras – especially those at this price point – have a tendency to be underwhelming. But the ION360 U is at the worse end of the spectrum compared to cameras such as the Samsung Gear 360 and Insta360 Nano.

Image fidelity is underwhelming and colours lack vibrancy, even under good lighting conditions. There simply isn’t much to get excited about here.

Image stitching is one area where the ION360 U performs well; it doesn’t have the noticeable stitching of the two sensors to which some VR cameras are prone. That’s helped by the fact that each lens has 220-degree FOV, so plenty of overlap to help with creating seamless results.

The ION360 U is expensive for what you’re getting, and that’s with a charging case thrown in. The latter is a bit of a double-edged sword – yes, it extends your device’s battery, but it adds much bulk. I prefer an implementation such as that of the Insta360 Nano.

Better yet, opt for a Samsung Gear 360, which will be compatible with any new phone you buy.

In the end, the lacklustre image quality, basic functionality, bulky case and high price point make the ION360 U one to avoid for most people.

An expensive and limited 360-degree camera.