The Iomega TV with Boxee is only the second product to hit the market running the Boxee media centre software, which started life on the PC. Unlike the original Boxee Box from D-Link, this one has a much more conventional design and can also work as a NAS device, so you can store your media on it locally and share it out to other devices on your network.

Externally, the Iomega TV isn’t much to look at. It’s essentially a squat, rectangular box finished in a mixture of glossy and matt black plastic. However, if you just want to slide it into an AV rack next to the rest of your kit you’ll probably appreciate its more standard design compared to the radical styling of the original D-Link Boxee Box. The original Boxee’s unusual shape made it difficult to house next to your other bits of AV kit. 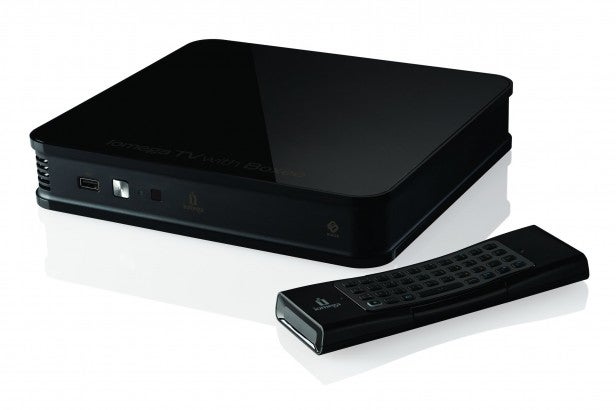 Connections are taken care of by an HDMI port along with digital and stereo phono audio outputs, a composite video connector, Ethernet jack and two USB ports (front and rear). The Iomega TV doesn’t have Wi-Fi built-in, which is a tad bizarre, but Iomega includes a Wi-Fi USB dongle that you can connect up to the port on the rear of the unit.

Iomega currently offers three versions of this product: one with no hard drive, one with a 1TB hard drive and one with a 2TB hard drive. We had the version without the hard drive. This model does have a fan for cooling the main Intel Atom CPU, but it’s so quiet that it’s virtually silent. 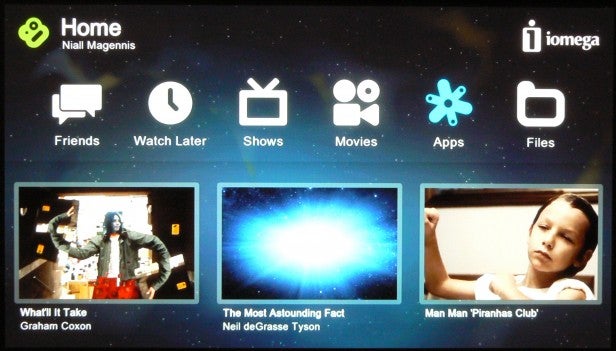 Like the D-Link model, this one comes with a dual sided remote control that has a full Qwerty keyboard on one side and more standard navigation buttons on the other. Interestingly, the navigation buttons also double up as a touchpad, so you can move a cursor around onscreen just by gliding your thumb over its surface. However, this is only supported in certain apps, such as the web browser. The remote on the D-link box uses RF wireless, but this one relies on InfraRed, so it needs line of sight to work.

In truth, the remote isn’t great. We find it annoying that you have to press the unlock button on the Qwerty side before you can start to type on it. Sony’s similar remote for its Google TV product has a sensor that knows when you’re holding the keyboard part upright and automatically unlocks it, which is a much better solution.  We also find that the keyboard frequently misses or double-enters letters during typing. 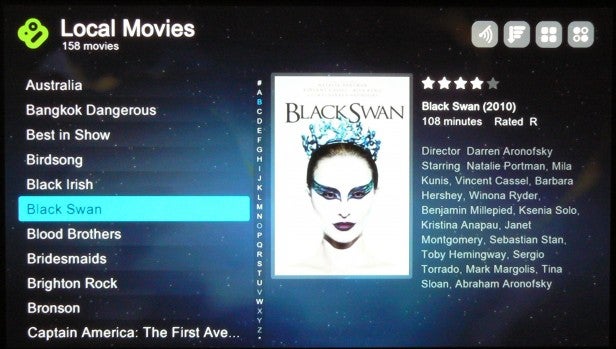 The navigation side of the remote isn’t much better. The main problem is that the four way control pad and the selection button in the middle are grouped together into one flat surface, so you can’t really tell by feel where the selection button is. As a result, you constantly have to look down at the remote to make sure you’re pressing the right buttons.

Before you can start using the Iomega TV with Boxee you first need to create a Boxee log-in. Once you’ve done this, you then tell it where your movies and TV shows are stored and it will automatically catalogue them. This takes quite a while, especially with larger libraries, but it generally does a pretty good job of working out which file name relates to which show or movie. However, it does help a lot if you stick to Boxee’s recommended filing system of using period marks to separate words in movie names and using the S0xE0x format for detailing individual shows in a TV series.

Shows and movies not recognised by the cataloguing system are filed under ‘Unidentified’. You can then go in and manually do a search to match the file to a movie or TV show name. However, this can be a bit tiresome to carry out via the remote and we actually found it easier to rename the files on our NAS drive to something Boxee was more likely to recognise and simply run the scan again. 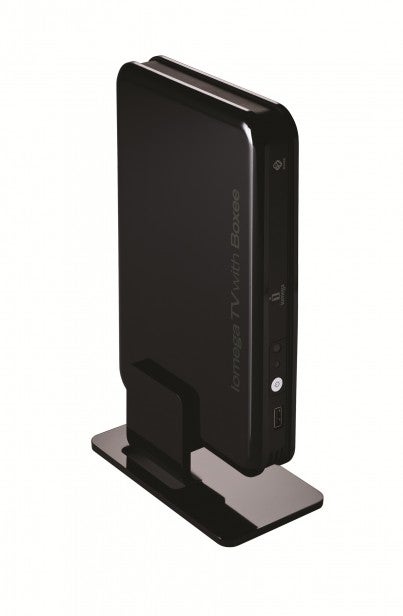 Nevertheless, once everything has been catalogued, the media browsing experience is first rate. Zipping through movies by poster art is so much more satisfying than just browsing through lists of file names. We also like the way the TV Show view gives you summaries of individual episodes of a series and lets you mark episodes as ‘Watched’ so you don’t lose track of which ones you’ve already seen and what you’ve left to view.

Codec is support is generally excellent too, and you’ll be hard pushed to find a video file that it won’t play. For example, it’ll handle DivX, Xvid and HD MKV files without breaking a sweat. However, audio support isn’t as good on this model as it is on the D-Link version, because for some unknown reason it doesn’t play ball with HD audio. 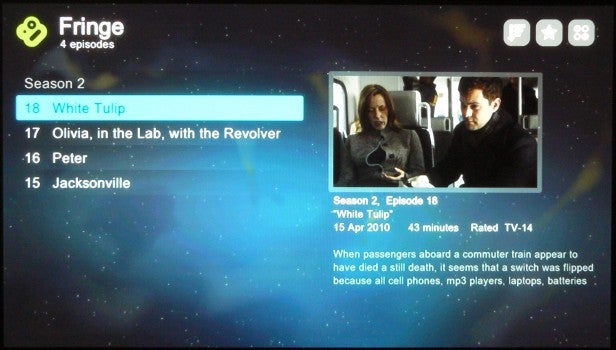 There are a few other negatives too. At times the software can feel quite buggy. For example, during our testing of the box it would randomly fail to send audio over HDMI to our Panasonic TV. The only way to get it back again was to restore all settings to default, which involved a reboot. It froze on us a few times, too.

Also, despite the apps section’s 200-strong app count for various video and radio internet services, including CineTrailer and AOL HD, it lacks any big hitters for the UK market. There’s no BBC iPlayer support, which is unforgivable considering the unit’s high price tag, and nor does it support ITV Player, 4OD, LoveFilm or Netflix. 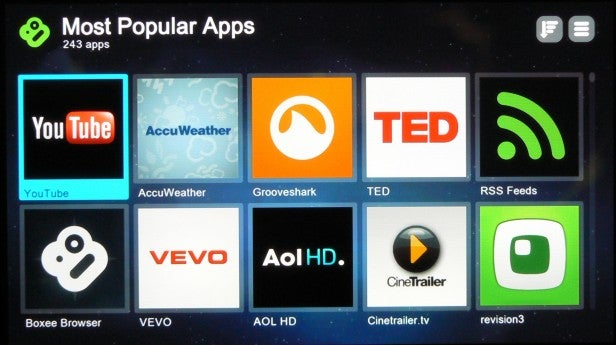 Also, for all the benefits of the slick user interface, navigation can be a bit quirky. To access the settings menu, for example, you have to hit the home button on the remote, then press the back button, which brings up the search menu.

You then have to press the up button to select a tiny ‘cog’ icon, which takes you to the settings screen. Talk about long winded. Even the function of the back button can be confusing. Sometimes it takes you back a step, while at other times it calls up this search box.

We had high hopes for the Iomega TV and especially its Boxee software. Although it streams lots of different formats and presents your video files beautifully, the annoying bugs, high price tag and lack of support for UK services like BBC iPlayer, severely dampen our enthusiasm for the product.