In the highly competitive small business network storage market NAS vendors come and go but stalwart Iomega has outlasted them all. Many manufacturers rely on a small portfolio of products but Iomega has consistently offered one of the largest choices around enabling it to cover home users right up to SMBs. However, although these appliances are some of the best built in town, Iomega hasn’t been so competitive on price and features.


The latest StorCenter Pro 150d aims to remedy these shortcomings and the 1TB model on review looks capable of competing closely with Netgear’s ReadyNAS NV and Buffalo’s TeraStation Pro II. The 150d stores a quartet of 250GB Seagate SATA hard disks and adds support for true hot-swap drives – a feature Buffalo still doesn’t offer. Access controls have been improved and the beefed up hardware specification aims to deliver better overall performance as well.


Build quality is undeniably superb but this is a very big box. It dwarfs our ReadyNAS NV appliance, standing over 6cms higher, 5cms wider and nearly 9cms deeper. It’s a lot noisier as well with the two large rear mounted fans quite intrusive on the desktop. The drives are mounted in hot-swap carriers behind a lockable front door and accompanied by a row of status LEDs to one side. The appliance sports pairs of USB 2.0 ports, fore and aft, and these can be used to connect external storage devices and a printer for sharing over the network. 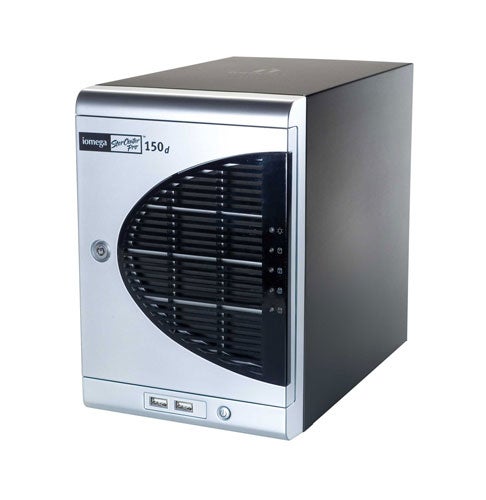 Installation is handled nicely by the bundled Iomega Discovery utility, which locates appliances on the network and provides direct access for mapping drives and running the management interface. Note that unlike many desktop NAS appliances, the 150d does not support secure management over HTTPS.


A quick glance at the menu options in the rudimentary interface is enough to show that Iomega has aimed the 150d primarily at business users as it is devoid of any multimedia functions. Unlike the ReadyNAS NV you don’t get an iTunes server, support for UPnP or any other streaming services. What you do get is a reasonable range of storage features well suited to a small office. The appliance defaults to a four-drive RAID-5 array but you can go for mirrors, stripes or spans instead. The drives can be monitored from the web interface and you can choose a power down time in minutes or hours but no system logging facilities or SMART support are available.


Alerting is provided so the appliance will issue emails if any problems occur although as far as we could see this was limited to the drives and array. We pulled a drive from the array to simulate a failure and the appliance sent out an alert to us and another when we replaced the drive. Rebuilding the array took around two and a half hours and apart from a brief repair phase the appliance allowed full access during the rebuild.

Access security is present and correct as the appliance maintains a local user and group database and you can specify an NT domain or AD server for user authentication. Read and write access restrictions can be applied to each folder and quotas can be used on specific users to limit the amount of storage they can consume. Client support is particularly good as the 150d can handle CIFS/SMB, NFS and AFP protocols so will work happily with Windows, Linux and Mac systems.


Backup features don’t disappoint as the appliance can run scheduled full and incremental jobs that secure selected folders to a USB device or to another StorCenter over the network. For PC backup you get a five user copy of EMC’s Retrospect Express which offers plenty of wizard-driven assistance making backup and restoration tasks simple. You can create a schedule to run backups regularly but once the first one has completed all subsequent jobs will only copy new and changed files. 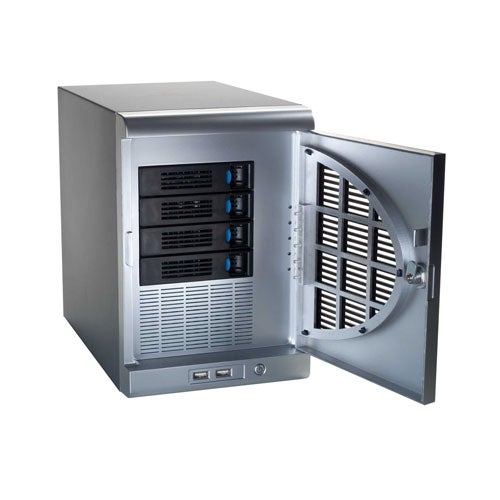 If you plan to upgrade the appliance’s firmware we recommend extreme caution. The process is handled by a separate Windows only utility and after updating the appliance we found it had been set back to factory defaults. Fortunately, the data was still there but we had to reconfigure the workgroup name, recreate users and re-establish our share access – something a small business will find unacceptable. Iomega advised us this is a known issue with the 150d, which it is expecting to fix later this year.


General performance over Gigabit Ethernet was on a par with Netgear and Buffalo. Copying a 690MB test file from a Supermicro Pentium D 3.2GHz PC to the appliance and back again returned 13.5MB/sec and 15.3MB/sec write and read rates respectively. FTP speeds were marginally faster with Put and Get operations from the Window FTP command line utility delivering average write and read speeds of 17.9MB/sec and 19.3 MB/sec.


A well constructed NAS appliance with plenty of storage capacity for the price and a fair turn of speed. A good choice for general office file sharing and PC backup, but it is noisy and when compared with similar appliances from Netgear and Buffalo, it comes up short on features.

(centre) The drives can be monitored and sent to sleep – error logging is not provided.(/centre)

(centre) Read and write access can be restricted on each share but only one folder can be an FTP source.(/centre)

(centre) Upgrade the firmware and say goodbye to your users, shares and network settings.(/centre)

(centre) Client backup gets a boost with the five user copy of Retrospect Express.(/centre)