The IOCELL NetDISK 351UNE is ostensibly just another NAS, but you should never judge an external storage device by its chassis. The NetDISK 351UNE does indeed have a Gigabit Ethernet port, but it also features an eSATA and a USB port, making this a Network Direct Attached Storage device – simple, no? 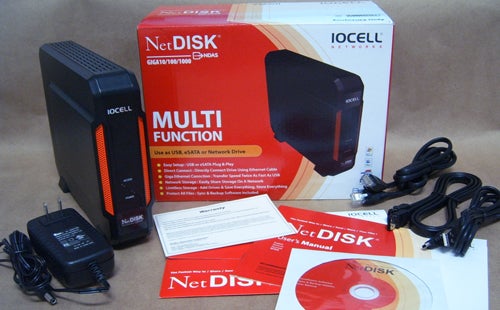 IOCELL touts a number of benefits to this method of hooking up a network drive to your PC. Because there’s no messing about with IP addresses set-up is as easy as plugging in the NetDISK 351UNE in, connecting it to your network, installing the driver software and entering a couple of serial codes (for security).


IOCELL calls the NetDISK 351UNE ‘hack-proof’ because IP addresses aren’t used, making it undetectable in your network. Anyone who really wants to get hold of your data will doubtless still find a way, but that’s true of any storage device.


Importantly, NetDISK 351UNE drivers are available for Windows, Mac and Linux – although the latter is in beta currently. There are a few features only available on Windows, such as connecting multiple NetDISK devices together in ‘Multidisk’ configuration, but most Mac and Linux users won’t miss out on anything.


The NetDISK 351UNE measures 213.5mm x 48mm x 161.3mm, weighs 568g diskless and has one drive bay inside. Thoughtfully, Ethernet, eSATA and a USB to mini-USB cables are bundled with the NetDISK 351UNE itself.

The system comes drive-less at a little over £60, so you’ll need to factor in the cost of whatever capacity drive you chose to install. Considering a 1TB hard drive can be found for under £50, the total cost shouldn’t be that intimidating. If you need more storage than the 351UNE can supply, or want the other advantages of a multi-disk device, the 2-bay NetDISK 352ND satisfies that need.


A downside of the NetDISK connection method, and the intentional lack of an IP-based connectivity, is that many of the features we’ve come to take for granted on other NAS devices are highly conspicuous by their absence from this one. There’s no media centre, no BitTorrent client and no FTP access, to name just a few omissions.


If you’re just looking for a straight-up backup solution that obviously won’t prove a problem. Indeed, there’s a strong argument for not making data on your network too readily available. Plus, you could always route your media via a PC, or even just shove a Mac mini under your TV. 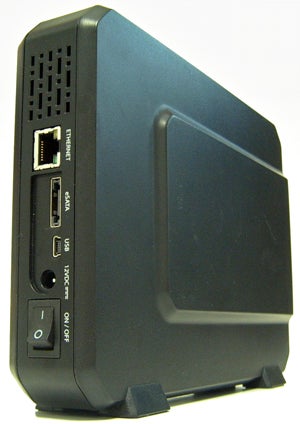 Those not bothered by such limitations, or for whom such features are simply unnecessary, will be rewarded by the impressive speed of the NetDISK 351UNE. Over USB 2.0 transfers are hardly impressive, being limited as they are by the connection. Over Ethernet or eSATA, however, the results are nothing short of excellent.


The IOCELL NetDISK 351UNE takes an interesting tangent to the usual array of external hard drive caddies and NAS devices and it has paid off. It’s easy to use and, more importantly, offers transfer speeds as fast as you’ll get away from a USB 3.0 device.