Whenever a retro styled game rolls out on to the App Store, you know before you’ve even started it up that the level of difficulty is likely to be somewhat higher than the leagues of glossy candy laden games and their ilk that make up the marketplace’s bulk.

For whatever reason, retro seems to mean difficult whatever genre the title sits within, and it’s not entirely clear why. The default understanding is that “games were harder in the old days”, though I’m loathed to suggest that’s the case. It was certainly harder to survive levels in your average game back in the 80s and early 90s I’d say, and the ability to save your progress wasn’t yet a reality, but when the design of games has changed so radically in recent years, it’s such a comparison fair?

When the majority of mobile games are designed to be played in two or three minute bursts rather than who weekends, can you really line up a title from today next to a title from twenty years ago? Curiously, that’s what Into the Dim attempts to do. On the one hand it’s a pixel art, black and white rougelike that harks back to decades long ago, and on the other it’s a free-to-play, in-app purchase fuelled adventure designed from the ground up for the mobile age.

The combination of the two approaches means that, as hinted at earlier, coming out on top in play is actually rather hard. Stepping out as a young lad chasing down a mutt with a penchant for wandering off, Into the Dim thrusts you into a series of top-down dungeons, patrolled by beasties lifted from everything from Lord of the Rings to the Halloween section at your local Clinton’s Cards. The game restricts you to making just three moves at a time initially (moving in any available direction or attacking a rival within range all counting as one move each) with all interaction handled by virtual keys laid out at the bottom of the screen. 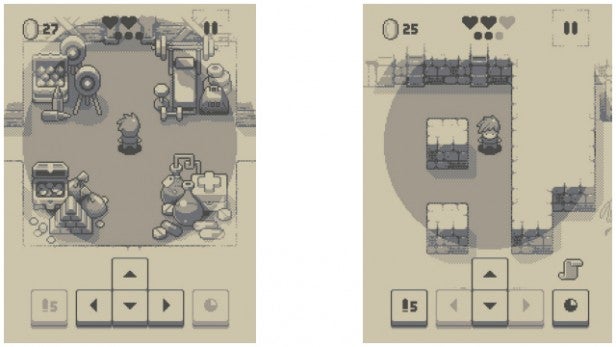 Like you, every other living being you encounter can make three moves at a time, and so taking out enemies in your path is case of outwitting them: positioning yourself so they land up slap bang in front of you ready for your next move. The erratic nature of these beasties, however, means that getting yourself prepared in such a way is often a case of luck rather than judgement, although the ability to skip a move means you can outwit your foe if you think before you move – and that’s something that, from the get go, you’ll need to do if you want to survive more than a few seconds.

Contact with enemies is particularly brutal and is to be avoided, so success in Into the Dim isn’t a case of chasing down every beastie in gung ho fashion, but rather creeping up on them and taking them out almost unobserved. Three punches enough to take out the first batch of enemies in early stages, but increasingly you’ll need to up your game in order to survive, stocking up on bullets for a gun you’re also packing or upgrade your abilities. That means using the game’s base (effectively Into the Dim’s menu screen) to buy those bullets, which is where in-app purchases come in. Naturally, the coins needed to pick up new items can be earned in play (typically after felling a rival), but you can also amass them either by watching ads or parting with cold hard cash. 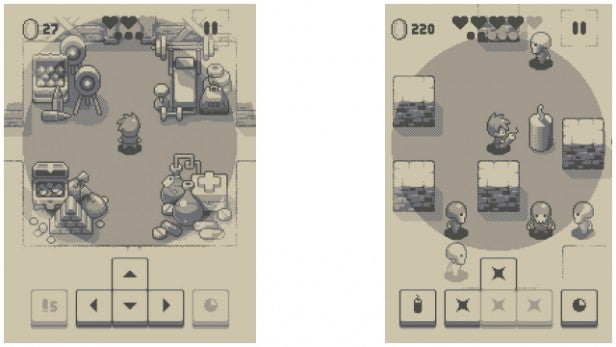 If you choose not to pay, your progress isn’t blocked in any way, but it does make things a little harder given that you can’t take on old, easier levels to amass extra coins. Grinding simply isn’t catered for, with Into the Dim essentially using in-app purchases as a way to make gameplay a little easier; the fact you can’t head back to base until you’ve cleared a level of all its enemies means picking up coins in play is a matter of routine, and so unlocking new weapons will simply take longer for non-players.

Add to this secret rooms that have to be cracked open with cute little mini games and a sense of style that harks back to an era of gaming that existed long before most of its audience were even born, and you have a neat little package. Into the Dim doesn’t do anything new with the roguelike, but for those looking for a little snapshot of what a deliberately retro take on getting down and dirty in a dungeon looks like in 2016, there can’t be many better choices.

Verdict
A roguelike with a distinctly retro feel, Into the Dim makes no apologies for being hard – all roguelikes are – and its attempt to take the genre into free-to-play territory is largely successful. Just don’t count on it doing anything too revolutionary in the process.