A week ago Intel launched its latest range of Pentium 4 processors. What sets these new chips apart from their predecessors is support for 64-bit data execution on top of the 32-bit support.


However, this is not the only change. The Level 2 cache has been doubled to 2MB and Intel is now offering what it refers to as ‘enhanced’ SpeedStep technology.


The top of the range chip will be the new Extreme Edition which operates at 3.73GHz and has a 1066MHz bus. The new Extreme Edition differs not only by supporting 64-bit operating systems, but also with its cache size, which has actually been reduced in total by 512KB. The reason for this is that the older 3.46GHz had 512KB of Level 2 cache and 2MB of Level 3 cache, while the new 3.73GHz processor only has 2MB of Level 2 cache. The micron process used on the die has also shrunk to 90 nanometre compared to 130 on the 3.46GHz part.

All of the new processors incorporate XD bit (Execute Disable Bit) technology. This is Intel’s equivalent to AMDs Enhanced Virus Protection, and prevents the execution of certain types of buffer overflow worms and viruses. This is not a new feature, as all Intel processors with the J suffix have it as well as later models.


Interestingly, Intel has not launched a 3.8GHz part at this time, so the 570J is still the fastest Intel processor in terms of clock speed that you can buy. But it’s not really a surprise move as Intel has already stated that it is moving away from pure clock speed increases and adding other performance enhancing features.


Intel refers to its 64-bit implementation as EM64T or Extended Memory 64-bit Technology. This enables the processors to address more than 4GB of memory. However, this is not the only benefit of going to 64-bit. A 64-bit operating system running 64-bit code will give you a performance boost over a 32-bit operating system running 32-bit code. The main reason for this is that the CPU address register is larger than on a 32-bit processor, which in turn enables more data to be processed. To put it in a simple way, a 64-bit processor provides faster performance than a 32-bit processor by handling twice as much data per clock cycle. 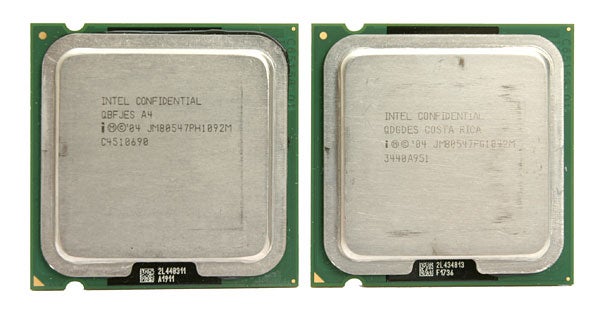 As you most likely are aware Intel is playing catch up on the 64-bit desktop market, since AMD have had products available for over a year and a half now. The 64-bit implementations from AMD and Intel are very similar, so there should be only minor tweaks that would be needed to create 64-bit operating systems and applications that will work well on both platforms. None of this has made any difference as we have yet to see a finished 64-bit version of Windows XP and it is this that holds the key to mass market 64-bit desktop computing.


Intel has of course already flirted with 64-bit computers with the introduction of the Itanium processors a few years back, but these were never intended for desktop use. 64-bit computers stretch even further back as DEC launched 64-bit machines back in the early 90’s with companies such as HP, Silicon Graphics and Sun all having products available during the mid to late 90’s. Neither of these products became hugely popular outside of their markets mainly due to very high purchase costs.

But what will 64-bit computing mean for the masses? It’s really hard to say right now, but judging from the interest from both OS and software developers it looks like being the big thing in 2005, as long as Microsoft gets Windows XP 64-bit ready soon. There are already some applications out that works natively on the 64-bit release candidate of Windows XP 64-bit. Although finding something that can be used as a benchmark proved tricky and the only application we could track down with a built in benchmark was Pov-ray 64-bit.


A 64-bit patch for Far Cry should however be out in the near future, but this is in partnership with AMD, so how well this will work in the Intel platform we won’t know until it is released. There is already a 64-bit version of Unreal Tournament 2004 out, but only for servers. Hopefully a playable version will be out as soon as Windows XP 64-bit launches. Shadow Ops: Red Mercury is another game that has just been released with 64-bit support out of the box.

Now this might not sound too promising, but I have no doubt that by the end of this year – assuming that Microsoft gets Windows XP 64-bit out before the summer – there should be plenty of applications and games available.


I haven’t mentioned Linux so far and the Redhat and SuSE distributions are available in 64-bit but Linux is still not a popular desktop OS.


However, for those who have the time, knowledge and energy to devote to it, it is a viable alternative to Windows and there many applications available for 64-bit Linux. But if we are to believe what AMD claimed a couple of years ago, it shouldn’t be hard to port any software to a 64-bit Windows XP platform that runs on the 32-bit Windows XP platform. No doubt we’ll find out if this is true in due time.


Before I move on to the benchmarks, let’s have a brief look at what the Enhanced Intel SpeedStep technology brings to the new processors. Although the Pentium 4 is likely to disappear from the mobile market this year, SpeedStep technology is still valid, especially with small form factor PCs becoming increasingly popular.

This is very similar to AMDs Cool’n’Quiet technology but the new Intel processors won’t slow down beyond 2.8GHz whereas the Athlon 64 processors can go as low as 800MHz.


The advantage of reducing clock speeds when there is a small load on the CPU is lower power consumption as well as a quieter running CPU cooler due to less heat being produced. The Extreme Edition processor lacks support for the enhanced version of SpeedStep. The reasoning behind this I presume is that the Extreme Edition is for gamers who will want to go at pedal to the metal at all times.


As I mentioned earlier, we only managed to source one 64-bit benchmark and that is POV-Ray (Persistence of Vision Ray-Tracer). POV-Ray is a free ray tracing application which can be downloaded from POV-Ray’s website and is available in 32-bit and 64-bit versions, making it a useful tool for indicating the performance difference of the new Intel processors.

The great thing here is that POV-Ray has a built-in benchmark that loads the processor quite heavily and once finished shows how long it took to run the various rendering tests. The results didn’t come quite the way I expected taking over five minutes longer under Windows XP 64-bit for each of the two processors. However, it’s worth taking into consideration that it’s still early days for 64-bit computing. POV-Ray might be partially responsible here, as it is very likely that the 64-bit version hasn’t been optimised for the new Pentium 4 processors.


Slightly more worrying is the SYSmark 2004 scores under standard 32-bit Windows XP, with neither of the new processors managing to outperform a Pentium 4 560, which clocks in at 3.6GHz. The 660 scored 203 points overall while the 3.73GHz EE managed a score of 208. Compare this to the 560 which scored 210 and the results are quite disappointing. Even taking into consideration that the graphics card was different, this wouldn’t have more than a couple of points impact on the overall SYSmark score. ”’* See Footnote *”’


The PCMark 2004 score initially show similar drops in performance, but the CPU score is up for both models compared to the 560, but not by a very big margin. The 3.73GHz EE scores much higher in the memory benchmarks, although this is down to the higher bus speed rather than anything else.

Considering the hefty price premium for the 64-bit processors at the moment, it is a questionable investment; unless you know for certain that you want to move to a 64-bit OS. You can purchase a Pentium 4 560J for £270.99 while the 660 will set you back £396.98, that’s a price difference of £126 less a penny. The 3.73GHz is as yet not available in the UK, but it has a list price in the US of $999 which seems to be the standard list price for every new Extreme Edition processor.


Intel’s first step into the 64-bit consumer market doesn’t impress, but time will tell how good these processors are under a 64-bit operating system. To be fair to Intel, the platform is rock solid as I ran a burn-in test for over 24 hours and the test setup didn’t crash nor did it show any sign of problems. It is just a shame about the average performance numbers, but hopefully this is something Intel can improve over time.


With no official word from Microsoft as to when the 64-bit version of Windows XP will launch, Intel has taken its first step into the consumer level 64-bit market with its latest processors. Initial test results don’t impress, but it would be unfair to draw too many conclusions based on a single test on an unreleased OS.


The SYSmark 2004 scores above definitely seemed odd to us, and after speaking with Intel we were told that there was no way that the 560 should be faster than the 660, and definitely not faster than the 3.73GHz EE. With this in mind, we built a totally fresh testing rig and benchmarked all three processors again, one after the other. The test rig comprised an Intel D925XECV2 925XE motherboard, 1GB (two 512MB modules) of Micron PC4200 (533MHz) DDR2 memory, a Seagate Barracuda 7200.7 SATA 200GB hard drive and an AOpen GeForce 6600GT PCI Express graphics card.


The results from the new SYSmark 2004 runs were far closer to our expectations, with both the 560 and 660 chips turning in scores of 191 and the 3.73GHz Extreme Edition racing ahead with 201 points. The discrepancy in the original results was probably due to driver and Service Pack changes between the original 560 review and this one. Assuming that we still have the hardware in the lab, all future comparisons of new and old technology will be done at the point of review in the exact same testing rig.