Intel’s press kit for Core i7 included an Intel DX58SO Smackover motherboard so, if you read that article, you’ve already seen something of this model. However, Ed said very little about whether the DX58SO was actually any good because the article was focussed on the technology behind Intel’s latest family of processors. So it’s time to put the record straight.


Historically Intel motherboards have been rather dull, reliable products that are aimed at the workstation and office PC market so you seldom get any exciting overclocking features, funky LEDs, or onboard POST debug displays. As if that wasn’t enough Intel motherboards are traditionally rather expensive so we were apprehensive as we approached the DX58SO. 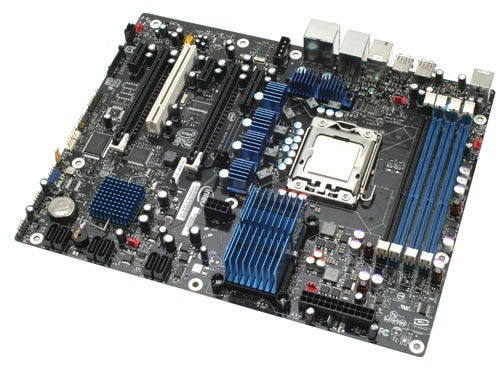 As it stands (being a brand new product), Core i7 is aimed at the enthusiast overclocker/gamer/power user, which is another way of saying that the new processor is rather expensive compared to Core 2. The changes to Intel’s architecture with Core i7 move the emphasis away from the motherboard and towards the processor with less work for the chipset to handle.


First impressions of the DX58SO are of a very conventional motherboard. Conventional, that is, provided you picture an AMD Athlon 64 or Phenom motherboard, as the memory slots are arranged at the top of the board. This is logical as the memory is controlled by the CPU rather than the chipset, which is the arrangement AMD has been using for a while. A side effect of this layout is a stack of space at the side of the board. This is valuable real estate as it is well away from the graphics slots so there is no danger of any connectors being overshadowed by a long card like the GeForce GTX 280 or Radeon HD 4870. 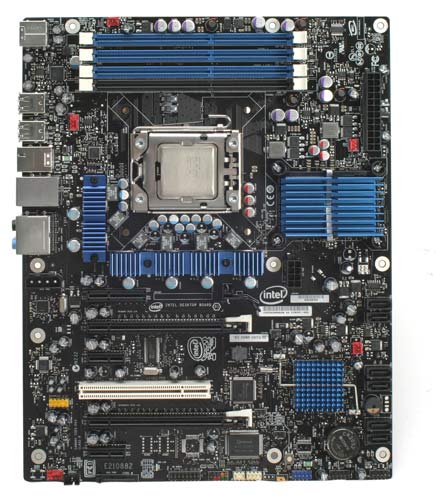 For some reason Intel has used the space where you traditionally place the memory slots in an inefficient manner. The main power connector is up towards the corner of the board and below it we find the passively cooled Northbridge. The eight pin EATX connector lurks beneath the Northbridge towards the centre of the board just above the PCI Express x4 expansion slot and it seems unlikely that it couldn’t have been placed somewhere more convenient.


The six SATA connectors are controlled by the ICH10R Southbridge and are arranged down the side of the board in three pairs. The top pair is well placed above the primary graphics card and the second pair looks fine although one of the connectors will be blocked by a double-slot graphics card. The bottom pair of SATA connectors will be completely unusable if you use a second large graphics card so that’s three out of the six SATA ports if you want some serious CrossFire action. And it will be CrossFire as Intel hasn’t signed up for Nvidia’s SLI license so the DX58SO doesn’t support two GeForce graphics cards in SLI.

This SATA business is a serious consideration as Intel has ditched any trace of legacy connectors so there is no support for floppy drives or IDE drives. We’re all in favour of the move to SATA as the ribbon IDE cable is such a travesty but it means that Intel needs to work harder with the location of its SATA connectors. The absence of legacy ports means that the I/O panel is a model of neatness with eight sensibly placed USB 2.0 ports, one Firewire port, Gigabit Ethernet and two eSATA connectors that are controlled by a Marvell connector.


Intel has taken other steps to keep the layout of the DX58SO tidy and the area around the CPU socket is especially neat as the power regulation hardware does away with the usual capacitors, chokes and MOSFETs and instead uses six solid state PWM (Pulse Width Modulation) chips, which each have a passive aluminium cooler that is finished in an appealing shade of blue.

In a similar vein Intel has chosen to specify four DDR3 memory slots rather than the six slots that have become the norm on X58 motherboards with the new triple channel memory controller. When we first tested the DX58SO the memory worked in triple channel mode with three modules but dropped back to dual channel when all four slots were populated. Over the course of the four BIOS updates that Intel has issued since September the way the board uses memory seems to have changed and when we installed four modules during the course of this review it seemed to run happily in triple channel mode.


It was inevitable that we would compare the DX58SO with the Asus Rampage II Extreme that we reviewed recently and the Intel didn’t come out too favourably. On stock settings with the CPU at 3.2GHz the Asus had a small advantage but it really wasn’t much to write home about. When we overclocked, though, it was a completely different story as the Asus would overclock to 4.0GHz with a single click of the mouse. The DX58SO was more difficult to coax into action despite having a BIOS that looks ready for overclocking action. 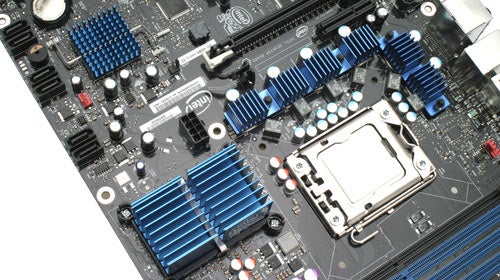 The Performance section of the BIOS lists three columns of figures with Default on the left, Proposed in the middle and Active on the right so you can see exactly where the settings started, where they are now and where you want to go. The problem is that the clock multiplier can only be adjusted if you leave Turbo Mode enabled and you have to change the setting for each of the four cores separately. In effect the only way we found to overclock the DX58SO was by raising the base clock figure from 133MHz and we couldn’t get the clock speed beyond 3.6GHz which is fairly limp.


To top it all off, when we tried to overclock, the system blue-screened and we found that the BIOS wasn’t intelligent enough to detect our failed attempt at overclocking and we had to undo the settings manually.


On the face of it the DX58SO offers a relatively cheap way into the X58 world of Core i7 but the questionable layout and poor performance make it something of a mixed bag.