Intel’s new DX38BT takes over from the BadAxe 2 D975XBX2 as the king of the Extreme Series line of motherboards. As the model code suggests the DX38BT uses Intels’s own X38 chipset, which supports the latest 45nm Penryn CPUs. However, there’s a fly in the ointment. The Taiwanese motherboard manufacturers have started to release BIOS updates that add support for a 1,600MHz front side bus to their X38 models along with support for 1,600MHz DDR3 memory. The problem is that the 1,600MHz front side bus requires unofficial support that takes the X38 into the same territory as the X48 so Intel is unlikely to go down this route with the result that its latest and greatest motherboard, the DX38BT, doesn’t support its latest and greatest processor, the QX9770.


In addition to this rather fundamental problem the DX38BT doesn’t have any fancy must-have features and the passive cooling system looks positively staid when you compare it with the X38 offerings that we’ve already seen from the likes of Asus, Gigabyte, and MSI. 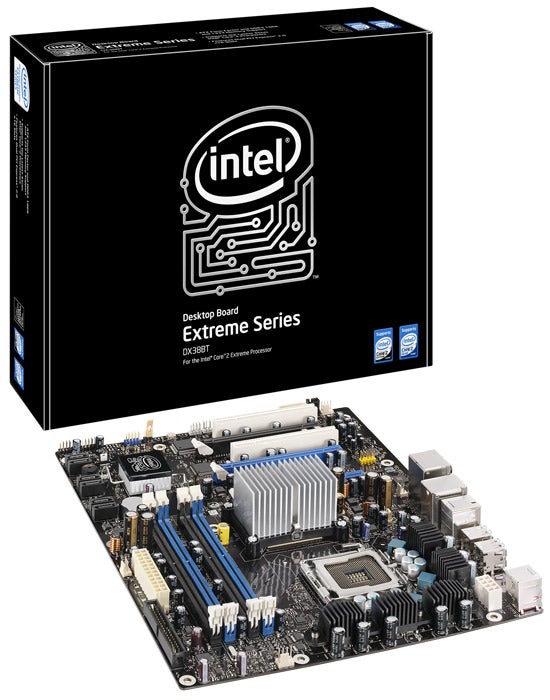 This gives you a strong hint about the capabilities of the DX38BT. After all, you only need loads of cooling if you expect the chipset will be generating excessive heat and in the case of an Intel chipset that only happens when you’re overclocking. The DX38BT isn’t a success in the overclocking department so you don’t need anything more than the two passive coolers that Intel supplies however there are a few noteworthy points about the hardware.


The Northbridge cooler is secured to a heat spreader on the underside of the motherboard with four stout screws instead of the usual feeble plastic pop pins. Second, Intel supplies a bizarre stick-on cap for the Southbridge cooler that carries a cartoon of a skull as a nod to the DX38BT’s codename of BoneTrail and the logo is also printed on the board.


You might feel that the Northbridge cooler requires the assistance of a fan but Intel hasn’t supplied a clip-on fan such as you see with many nForce 680i motherboards, oh no. What you get in the box is a tiny plastic frame that mounts on the fins of the Northbridge cooler and you have to supply the fan. Nice touch Intel! In the event you happen to have a 40mm fan that isn’t full of dust you can bet your boots that it spins at a ferocious speed and makes a terrible din.

Just like the BadAxe D975XBX2 the layout of the DX38BT is dominated by three PCI Express x16 slots, however the X38 chipset adds PCI Express 2.0 to the equation. The third ‘graphics’ slot only supplies four lanes of PCI Express which might come in handy when AMD unleashes CrossFire X or you can use it for a PCI Express sound card. The I/O panel looks very glitzy and modern as it does away with any legacy ports so you can forget about PS/2 for your mouse and keyboard. Instead you get two eSATA ports, eight USB 2.0 ports, one Firewire, Gigabit LAN and a selection of connectors for the HD audio. Unusually this is supplied by a SigmaTel 9247D chip instead of the more usual Realtek or SoundMAX.


Internally you get a single IDE connector and six SATA II connectors with Matrix RAID but there’s no floppy connector.


Intel has always been keen to dispense with legacy ports and in this regard it feels as though we are one step behind the trend or that Intel has gone a step too far. We’ve got no need for a Serial port or a Parallel port and we’re absolutely converted to the cause of USB memory keys but we have to draw a line somewhere. It’s hard to believe there’s no space for a floppy connector on an ATX motherboard and a keyboard PS/2 connector can be a get-out-of-jail card when you hit a problem and need to get into your BIOS settings. 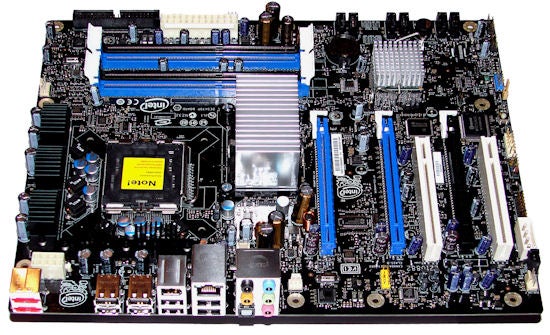 There’s a sign of some individual thinking at the foot of the board as Intel supplies a micro button for power but no button for reset. This is the first time we’ve seen a single button on a motherboard but it proved perfectly adequate during our testing and is something we always welcome.


The layout of the board is very tidy with loads of room around the CPU socket, the power connectors arranged at the edges of the board and the six SATA connectors are lined up in three pairs to allow you to install long graphics cards without any problems.


The BIOS includes a handful of unusual options in the Security section where you can enable or disable XD technology, VT Technology, Intel VT for Directed I/O (VT-d) and Virtual Appliance Operation for VA 3.0. As things stand we don’t see any need for virtualisation on the desktop but it’s quite possible that view will change during the course of 2008 and 2009 in which case these features may spring to the fore.

The BIOS contains the same Extreme Edition features that we got with the D975XBX2. In the Performance section you can adjust the CPU and memory clock speeds and voltages but the range of adjustments is slightly tighter than those offered by the Taiwanese companies. By default the CPU voltage is 1.325V for a Penryn QX9650 with a range of 1.2875V-1.60V however you can use CPU Voltage Offset to add an extra 0.3V over and above your selected CPU voltage setting. Enhanced Power Slope ramps up the current to the CPU but it’s a simple On/Off control and there’s no indication how much difference it makes. FSB Voltage is 1.20V by default (range 1.10V-1.50V) and MCH/ICH voltage starts at 1.25V and can goes as far as 1.70V.


Overclocking an Intel motherboard is meant to be a simple task as the Intel Desktop Control Centre allows you to change settings within Windows instead of tinkering in the depths of the BIOS. The DX38BT promises a new dawn on this score as users of the D975XBX2 are limited to version 3 of the software in Windows Vista (version 2 in XP) but DX38BT allows you to use the new version 4. The software isn’t included on the driver disc so we headed to the download page and downloaded the v4.0 Beta however the software wouldn’t run on our system even after we’d updated to the latest BIOS which is specifically meant to fix a problem with DCC. Hmm, not good. We overclocked manually and found that the DX38BT simply didn’t want to play ball with our QX9650. We used the MSI X38 Diamond for comparison and found that it would happily run at 3.51GHz on a 390MHz front side bus but the Intel board would only allow us to raise the clock multiplier by one step. Raising the front side bus by more than a handful of Megahertz was a distinct no-no which rendered the overclocking features a trifle irrelevant.


This sums up the DX38BT in a nutshell. If you’re running a Kentsfield processor there’s no reason to move to from P965 or P35 to X38 and if you have any plans for a 1,600MHz Penryn processor the Intel DX38BT won’t work. If you’re happy with a QX9650 at near-stock speeds then the DX38BT is a winner but that feels like a small and exclusive club.


Perhaps that explains why the DX38BT is relatively cheap compared to other X38 models on the market and it even comes with a copy of Ghost Recon Advance Warfighter as an added bonus.

Intel has rather shot itself in the foot by giving us a sniff of the 1,600MHz QX9770 processor as it effectively made the DX38BT obsolete before it went on sale. It’s a decent bit of kit that looks the part and delivers rock-solid performance but it’s time has already passed.