Intel’s DG45FC motherboard breaks new ground as it’s the first Mini-ITX motherboard we’ve seen with a regular desktop CPU socket. While Mobile On Desktop (MODT) boards are quite common, these use a mobile (notebook) chipset and CPU in a desktop form factor. For example the Jetway J9F2 (Socket M Intel Mobile) or the excellent MSI MS-9803 (Socket P Intel Mobile). These are popular because they’re low power yet fully featured, so are great for use in Home Theater PCs (HTPCs) or custom in-car entertainment installations.


However, the DG45FC is a traditional (albeit small) desktop motherboard that doesn’t have all the power saving wizardry of the notebook chipsets. These are rarer, as generally they draw more power and require more cooling and larger heatsinks, which limits the board’s possible uses. However, with low power versions of desktop processors now on the market, the distinction is blurred a little.


The DG45FC is an important board in that it’s one of the first desktop Mini-ITX boards from a mainstream manufacturer with a current chipset and reasonable price. Previous boards have been designed by smaller manufacturers and cost £150 or more.

Its nearest rivals are AMD 780G boards such as the Jetway JNC81 (£89+VAT) and JNC62K (£65+VAT) which have relatively powerful integrated graphics.


The DG45FC has clearly been developed from the Micro ATX DG45ID although Intel has had to do a fair amount of work to shrink it down to the Mini-ITX form factor of 170mm x 170mm. That’s only half the surface area of the 244mm x 244mm DG45ID yet the design team has managed to cram in most of the features from the bigger board.


The passive cooler on the G45 chipset is very small while the ICH10R Southbridge which sits between the Northbridge and I/O panel has no cooler at all. As you’d expect the DG45FC has only two memory slots but it supports up to 4GB of dual channel DDR2-800, which should be plenty. Of course, the biggest bulk of the board is taken up by the processor socket, which has a decent amount of space around it to accommodate sizeable coolers. 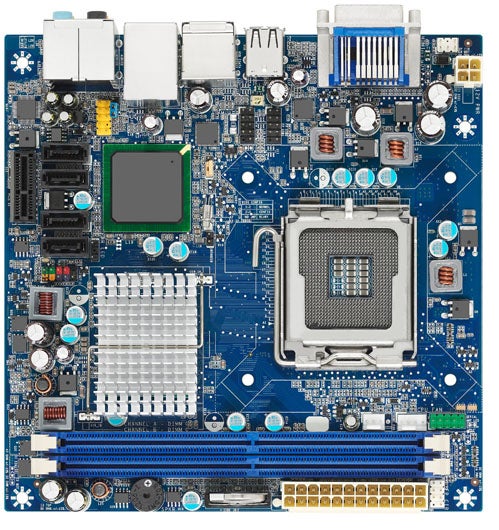 The only expansion slot is a single PCI Express x1 slot so you can forget about adding in a graphics card and there are no legacy ports, so you’ll need a SATA optical drive to accompany your SATA hard drive. Intel has included four SATA ports and the ICH10R Southbridge supports RAID so you’ll be able to build in as much storage as you could possibly want.


The I/O panel on the DG45FC is nearly identical to the DG45ID with HDMI, DVI-I, six USB ports, one eSATA, Gigabit LAN, analogue surround sound and optical audio output but the single Firewire port on the DG45ID isn’t included on the DG45FC. You’ll need to use two of the USB ports for the mouse and keyboard but there are headers for four more ports on the board.


Although the DG45FC is Mini-ITX it uses regular ATX power connectors. During our testing we measured a maximum power draw of 100W with a 3.16GHz E8500 CPU so you don’t need a beefy power supply. Due to the CPU’s chunky cooler, you’ll be restricted to a cube style of Mini-ITX case instead of a slim line unit, which makes it unlikely that you’ll be able to locate your PC under your TV.


Intel has been forced to cram in the various connectors and features which has had some undesirable consequences. The four-pin ATX 12V connector is behind the I/O panel and is surrounded by capacitors and is very close to one of the USB headers but that’s nothing compared to the two fan connectors. There’s a four-pin CPU fan connector and a three-pin case fan header arranged side-by-side between the memory slots and the CPU cooler with so little room for manoeuvre that you’ll find it almost impossible to connect a fan unless you first remove the memory.

Four of the chips have migrated to the back of the board in the area of the CPU socket which illustrates how little space there is to spare. The upshot is that you cannot use a CPU cooler that has a back plate so we had to switch from our usual Zalman cooler to a regular Intel CPU cooler. This is going to be a serious issue for a lot of potential customers.


It took a number of attempts to install Windows Vista on the DG45FC as the motherboard was flaky when it came to restarts. A BIOS update from version 0075 to 0077 didn’t help which was no great surprise as the release notes only referred to fixing an issue with PCI audio cards. Once Windows was installed we found that 3DMark06 and PCMark05 performance was pretty much identical to the Micro ATX DG45ID which is what we hoped to see. Compared to other Mini-ITX systems the DG45FC has blazing performance, provided you use a decent CPU, and the GMA X4500HD graphics core is easily capable of decoding Blu-ray movies for playback but this brings us to a fundamental question; why would anyone build a Mini-ITX PC? 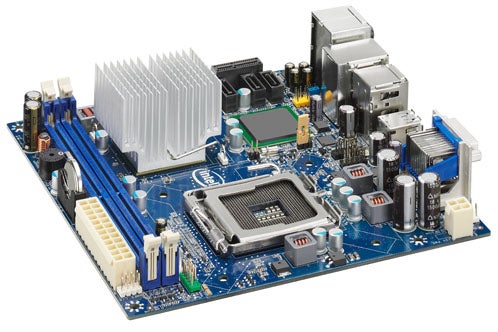 In recent times the easy answer is that you want to build a Media Centre PC that is very small and quiet but these days Blu-ray and High Definition are touted as key requirements and this is where your reviewer is confused. The vast majority of High Def content comes from Sky or Virgin, in which case you need the appropriate subscription and decoder box, and Blu-ray. You can certainly build a Blu-ray player around the Intel DG45FC but you’ll have to spend £70 on a BD-Rom drive, £70 for an OEM copy of Windows Vista and £60 for Blu-ray DVD software which makes it hard to argue against a domestic Blu-ray player for £200 or a Play Station 3 for £300. Of course, if you have a hard drive chock-full of 1080p movies you may choose to ignore that line of thinking.


On the other hand you may simply wish to build a very small PC in which case Mini-ITX may well look more appealing than Micro-ATX. There’s no denying that the PC case that houses the DG45FC can be very small but you still need the power supply, DVD drive and hard drive as well as a morsel of air circulation for cooling. The resulting PC won’t be much smaller than a Micro ATX system built around a DG45ID motherboard and it won’t have anything like the options for upgrades and modifications.


There’s one market where that could be very appealing if you’re building very small client PCs for your office and you want to treat the finished PCs as sealed units that take up the minimum of space yet you still want them to have enough power to do a useful day’s work. If that’s your plan then you’ll doubtless be interested in the Remote Wake Technology and Intel Management Engine for remote administration in which case we think you’re onto a winner but please wait for Intel to issue a new BIOS that fixes the dodgy restart.


Intel has condensed a G45 motherboard into the tiny Mini-ITX form factor. The result is a board that looks really cute but still manages to deliver desktop performance. We’re not sure it offers much to the average consumer that a more traditional MODT mini-itx platform couldn’t deliver but the price is good and so is the feature list.