First, the old classic, Cinebench R15. This rendering benchmark pushes every CPU core to its limit. We’ve tested every recent processor in this benchmark, making it a useful initial comparison. 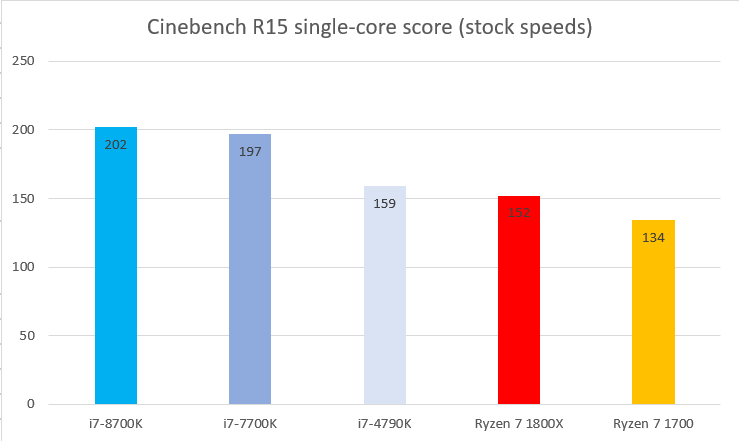 First, in the single-core test, you can see that there hasn’t been much improvement over the i7-7700K. This points to the fact that the individual cores in the i7-8700K aren’t that different to its predecessor. It does at least score a significant 43 points more than the three-year-old Core i7-4790K. As expected, the higher clock speeds (4.7GHz vs 4GHz) and generally better single-core architecture sees the i7-8700K take a big lead over the Ryzen 7 1800X.

But it’s the multi-core test we’re all really interested in, right? It’s here where those extra two cores show their power – and it’s quite a result. 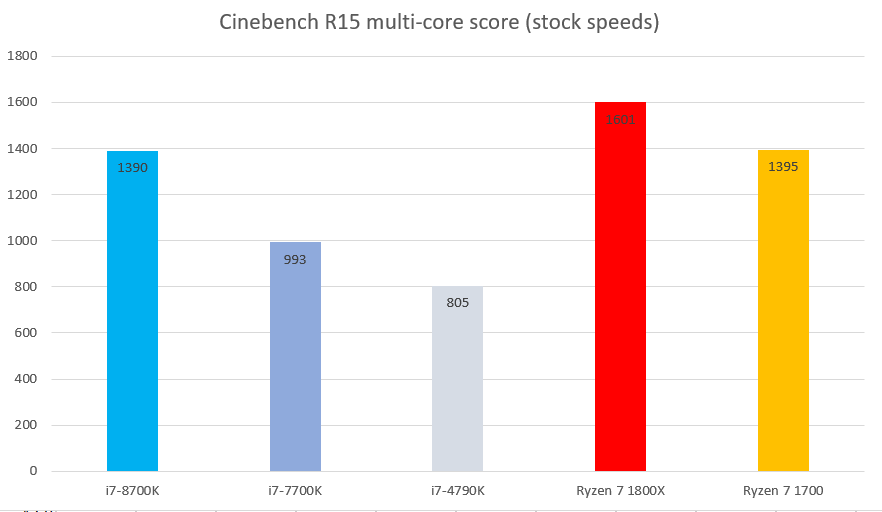 Intel handily beats all of its predecessors here, going well beyond 1000 points for the first time. It doesn’t come close to beating the 8-core Ryzen 7 1800X, and it’s pretty much on a par with the Ryzen 7 1700. That’s a massive result, especially since I haven’t even touched on overclocking yet in a cheap bid to build the tension in this review.

Let’s look at POVray now, another tough rendering benchmark that stretches these CPUs to their limits. I’ve dropped the i7-7700K out of the equation for now since it’s already immediately clear that the i7-8700K is the new performance champion – but let’s keep Trusted Reviews’ older Ryzen 7 results in the graphs for comparison’s sake. 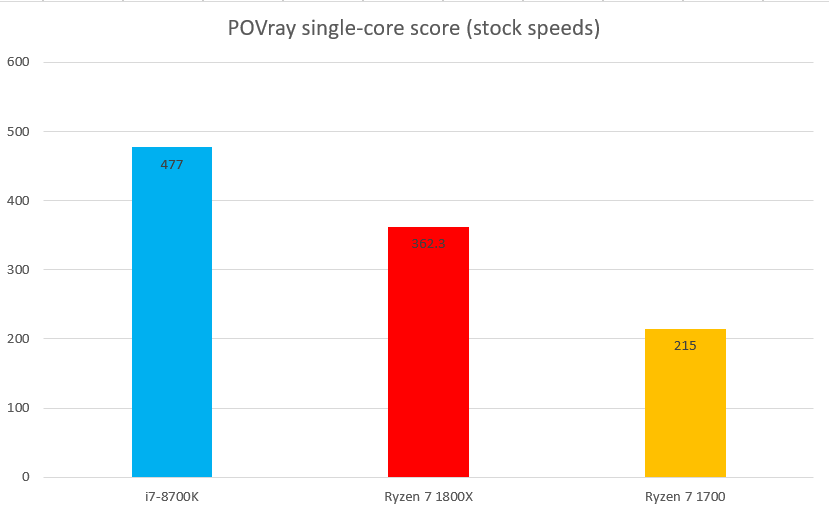 When it comes to multi-core, things are even closer – with the 1800X ahead of the pack when all the chips are running at their default clock speeds. 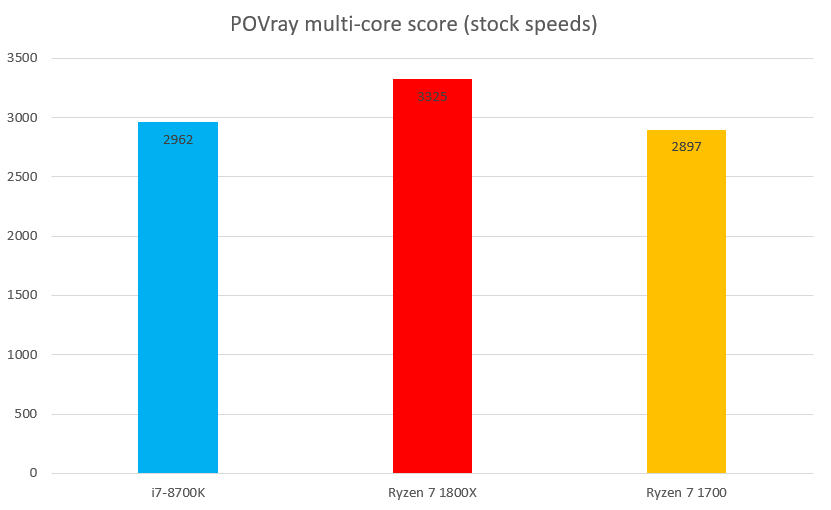 In my initial review, posted on the day of the 8700K’s launch, I didn’t make any comparisons between Intel and Ryzen for gaming. This was because Ryzen has moved on a fair amount since Trusted’s original review that was written in March. We all know more about what makes Ryzen tick, and multiple patches have been released for games, the Ryzen chipset and even for Windows 10 to get things working properly.

I’ve now re-run a set of gaming benchmarks on the Ryzen 7 1800X and despite the improvements, it’s still just trailing behind the Core i7-8700K. The graph below summarises all of the gaming benchmarks, which were taken on both chips running at stock speeds. 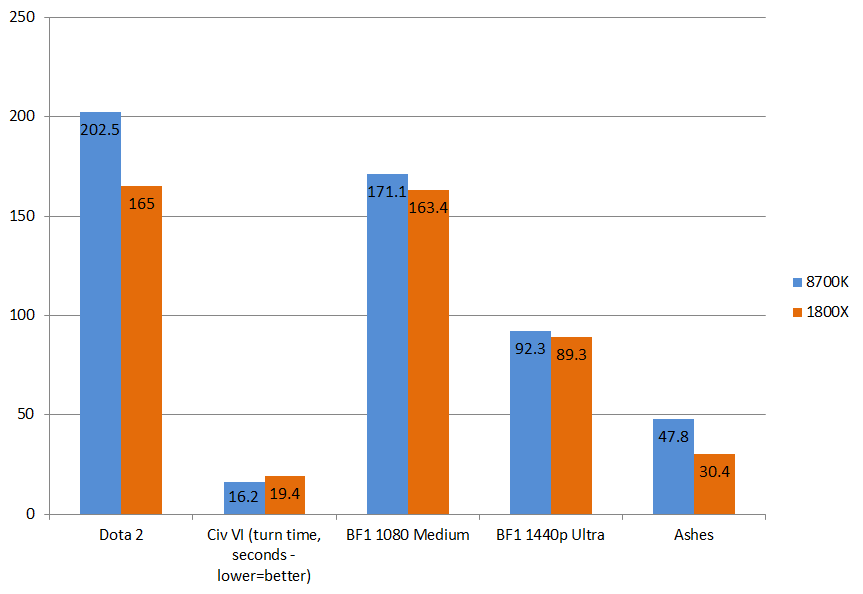 In every test I ran, the 8700K beat the 1800X. In Dota 2, an eSports title most sensitive to clock speeds, the 8700K was a long way ahead. In Civ VI, which appreciates multiple cores but seems to care more about clock speed, the 8700K could process an AI turn three seconds faster than the 1800X.

In Battlefield 1 with graphics turned down in order to make the processor the performance bottleneck, the 8700K drew ahead again. But in a more realistic scenario, running the game at maximum settings at 1440p resolution, the performance difference was very minor at just 3fps. Finally, in benchmarkers’ favourite Ashes of the Singularity, Ryzen was still a long way behind.

While I didn’t have access to a Ryzen 7 1700 or 1700X to test in games, given that even the most powerful Ryzen 7 couldn’t keep up with the 8700K it’s reasonable to say the other chips will be even further behind, albeit costing a fair amount less.

Overclocking is an interesting beast. On the i7-8700K, it unlocks an enormous amount of performance. The default 4.7GHz Turbo Boost clock speed barely even scratches the surface of what this chip is capable of, and it’s here where AMD’s Ryzen 7 processors should be very worried indeed.

First, the overclocking numbers. The Asus Prime Z370-A motherboard has an excellent automatic overclocking feature that happily overclocks the i7-8700K up to 5.1GHz, ramping up the core voltage to 1.4V. This is quite a stable overclock; I didn’t encounter any blue-screens-of-death while using it. However, only consider this overclock if you have a decent liquid cooler.

I had to turn my NZXT Kraken to Performance mode to bring temperatures below 92°C, and it was left hovering at around 85°C under load. I wouldn’t want it to remain at such a temperature all the time, but with an even higher-performance cooler this should be a happy overclock.

For comparison, under the same conditions, but at stock speeds, the chip runs at around 70-75°C, which is reasonable

I attempted to reduce the processor’s voltage to below 1.4V with little success while overclocking; blue-screens-of-death were far too common for this to be a stable overclock.

The fact that the i7-8700K so easily overclocks to 5.1GHz is testament to the enhancements made to Intel’s 14nm architecture. Last year, I struggled to get beyond 4.9GHz on my i7-7700K. 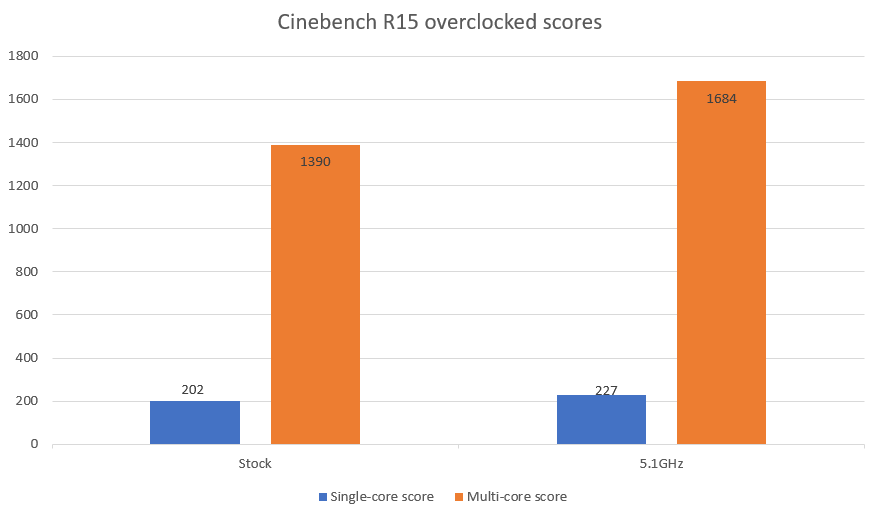 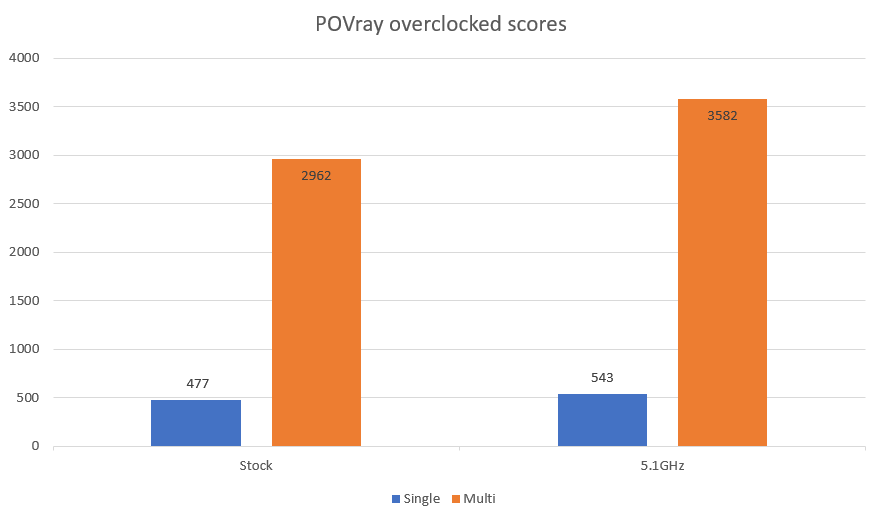 The multi-core scores in particular are interesting, as they easily beat 8-core AMD chips running at stock speeds. Because Ryzen in effect self-overclocks thanks to its eXtended Frequency Range (XFR) technology, I found overclocking my chip really didn’t do a huge amount to the Ryzen 7 1800X’s scores.

With monstrous overclock-ability, substantial single-core speeds, six cores and 12 threads, the Core i7-8700K is a serious response to AMD Ryzen. In my benchmarking tests, it’s obvious that this is an impressive all-rounder and quite simply the market-leader for gaming.

However, if gaming speed is less of a priority or you want to save some money, AMD has some advantages. First, it already has a huge range of motherboards available; B350 chipset boards can be found for as little as £85. B350 allows for overclocking and all the other features that a mainstream gaming PC requires. Compare that to Z370. While I don’t have pricing for any of these boards yet, expect to be paying closer to £150 for a board that allows for overclocking.

AMD’s second advantage is its much larger roster of eight-core processors, which can be found for as little as £280 at the time of writing. If you’re not particularly bothered about single-core performance and just want a massive multi-thread bargain, AMD still holds the value crown here.

More exciting are the chips further down Intel’s 8th-generation range: the much cheaper Core i5 and i3 chips look to offer performance well ahead of what we’ve seen before. We’ll have to wait and see how they stack up against AMD Ryzen 5 and 3.