I benchmarked the processor in our regular test rig. It differs slightly from the hardware TrustedReviews used to benchmark Skylake processors, but it’s similar enough to present an accurate comparison.

The best way of obtaining a quick and easy performance measurement is by running Maxon Cinebench – a benchmark that tests a system by rendering a highly detailed 3D scene.

I ran the test without any GPU assistance, so the scores achieved represent raw processor performance that most accurately reflects the differences between Skylake and Kaby Lake. The Cinebench benchmarks results in two scores: one for single-core performance and another for multi-core performance. 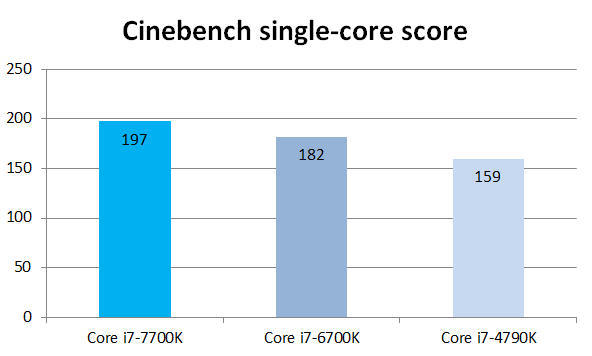 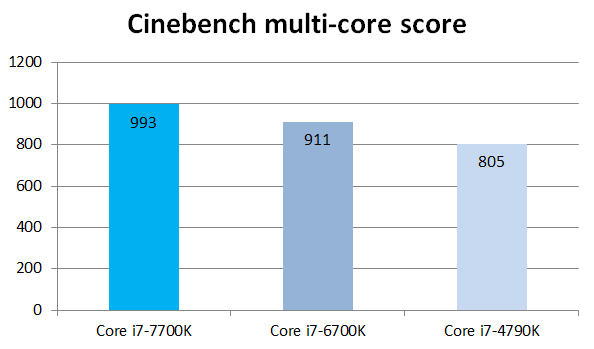 The graphs above show that, at stock speeds, the Core i7-7700K can outperform the i7-6700K by 8.2% in single-core loads and 9% in multi-core loads. All four cores were able to sustain the maximum 4.5GHz Turbo Boost speed for the entire benchmark.

Keeping in mind that the maximum speed of the 7700K is only around 7% higher than the 6700K, the new chip looks to be grabbing extra performance as a result of other efficiency gains, not just from its higher clock speed. That’s good news if correct, although because the systems aren’t identical there is the possibility of our current test rig helping things along a little. For my full review I’ll revisit the 6700K on our current test system and see if the results correlate.

Owners of the fourth-generation (Haswell refresh) Intel Core i7-4790K will be heartened to see that if they upgrade now, they’ll net an extra 23.4% of performance. It will cost you, but if you run intense multimedia operations such as rendering, the reduction in processing time will be significant.

For an apples-to-apples comparison, I also clocked the 7700K to the same speeds as the 6700K, limiting it to 4.2GHz. At these speeds, the 7700K managed a score that was 3.1% higher than that of its predecessor. Again, I’ll have to investigate whether this is down to the slightly different test system in use this time around.

I also ran some quick overclocks on the 7700K. This wasn’t in-depth tweaking, but simply using Asus’ super-simple EZ Tuning Wizard, which found an easy 4.9GHz overclock in a few mouse clicks.

A combination of the wizard and Corsair’s decent H100i liquid-cooling saw the chip pull off this overclock with relative ease; it managed significantly better scores in both Cinebench multi- and single-core tests, equating to a 7.9% performance increase on an 8.2% clock speed increase at a peak temperature of 76oC. 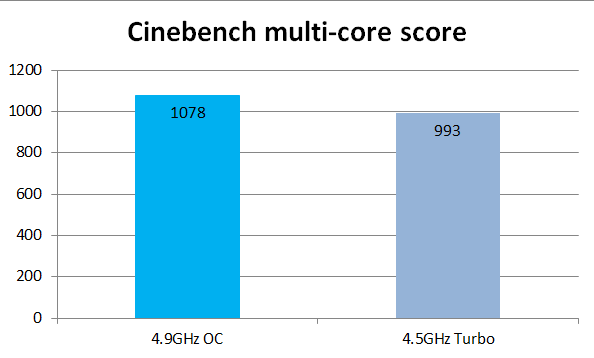 Since I wrote this original review, I’ve tinkered with some manual overclocking to see how far I could push it beyond 4.9GHz. The result? Not a lot. The absolute maximum I could get from our current test rig setup, which admittedly is limited by RAM that maxes out at 2,666MHz, was 4,944MHz.

Reports online suggest that some i7-7700Ks can get to 5GHz and beyond. This is certainly the case, but you shouldn’t buy a 7700K expecting to get those sorts of speeds; the silicon lottery is very much at play here.

Our original 6700K review didn’t test overclocking performance so I can’t make a like-for-like comparison, but I can say that 4.5-4.6GHz seems to be the prevailing overclock on the older model.

Intel consistently under-delivers when it comes to on-board graphics performance on its processors, and things are no different this time around.

I ran the BioShock Infinite benchmark at Full HD resolution and Medium settings and achieved an average frame rate of just 23.5fps. This is just 10.2% faster than HD Graphics 530 found on last year’s model. 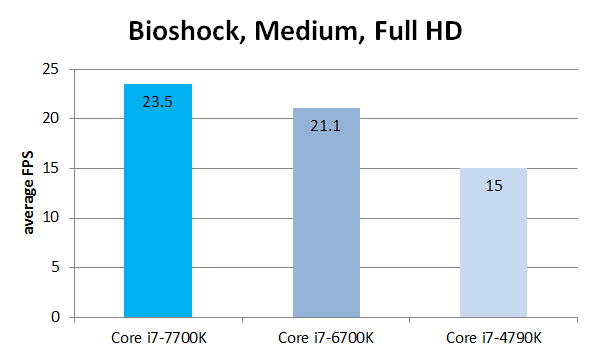 Intel would say that buyers of its high-end chips always pair up their processor with a dedicated graphics card, which is probably true. However, since every single chip in the Kaby Lake desktop range gets the same graphics chipset, this result will be the same across the range.

Sure, the processor is capable of adequate performance at lower resolutions in lower-end games such as MOBAs, but it’s still a long way behind what AMD’s on-board Radeon graphics can muster.

What’s more, this lack of performance will come to bear in other intensive tasks such as video editing and 3D work. You’ll have no choice but to invest in dedicated graphics hardware.

The Core i7-7700K manages decent performance improvements over its predecessors, without managing any surprising victories.

Those with a fifth- or sixth- generation Intel Core i7-K processor will have little reason to upgrade, unless you want the absolute fastest performance available or – if you’re running a fifth-generation chip – you’re after the new motherboard features offered by Z170 or Z270 chipsets.

If you’re on a fourth-gen chip, and you regularly hammer your processor with rendering tasks, it’s worth considering. The 25% performance bump isn’t to be sniffed at, nor are the improvements in chipset architecture that open the door to more, higher-performance peripherals that could completely change your workflow.

The same goes for graphics performance, which continues to underwhelm.

Perhaps the biggest reason to hold off upgrading your hardware are AMD’s new Ryzen processors. From what we’ve seen, these could offer a huge step forward in terms of performance and power consumption.

While they might not completely knock Intel from its perch, there’s some serious potential for AMD to manage decent performance on the cheap – which is worth bearing in mind.

Still, I can’t make recommendations based on products that aren’t yet available. If you’re after a powerful processor for less than £400, the 7700K is a great choice – if not a revelatory product.

The new king of consumer-level processors, but for how long?