The Intel Core i5-11600K is a fantastic processor for gaming, with top-notch performance and support for PCIe 4.0, which maximises the speed of supported next-gen SSDs. This Intel chip is very much a one-trick pony though, with its poor multi-threaded performance making it an inferior alternative to Ryzen processors for creative applications.

The Intel Core i5-11600K is a new mid-range desktop processor in the Rocket Lake-S family, with Intel pitching it as a good-value option for gamers who can’t afford the all-powerful i9-11900K.

With a near-identical spec sheet to its predecessor (the i5-10600K), Intel is relying heavily on the architecture improvements provided by Rocket Lake – a big risk considering Intel is still stuck on 14nm architecture.

Intel has at least introduced support for PCI Express 4.0, which raises the performance ceiling for compatible SSDs, so you cut down loading times and ensure your system is future-proofed for next-gen games. This alone is a big incentive to upgrade if you’re still using previous-generation Intel CPUs.

And with the company building on the solid foundations of its previous mid-range processors and hiking up those clock speeds, the Intel Core i5-11600K looks to be one of the leading CPU choices for your gaming PC.

The Intel Core i5-11600KF is also available to buy at a slightly more affordable $237, featuring identical specs but with the omission of integrated graphics.

Fortunately, Intel’s decision to handicap the core and thread counts for Rocket Lake hasn’t impacted the mid-range i5-11600K, so Team Blue hasn’t needed to make as many compromises when jumping to a new generation.

However, with no interesting boosts to the spec sheet, Intel is relying heavily on the improvements provided by the Rocket Lake architecture instead, with Intel claiming 19% more instructions per cycle than the older 10th-Gen Comet Lake processors. This should mean you’re getting a faster, more efficient CPU.

The new Rocket Lake architecture also opens the door to a slew of exciting features. Chief among these is support for PCI Express 4.0, which raises the performance ceiling for SSDs from 8GB/s to 16GB/s.

When you consider the PS5 was hailed for having SSDs with a read speed of 5.5 GB/s, the new-fangled support for PCIe 4.0 is undoubtedly exciting, although you’ll need to purchase supported SSDs to make use of such a performance. Such hardware is thin on the ground now, and will undoubtedly be pricey, but it makes a lot of sense to get your system future-proofed in advance.

Intel also claims its integrated graphics has seen a 50% boost compared to the previous generation. I remain unconvinced in terms of how beneficial this feature will be to the average user, since the Intel Core i5-11600K is best used in conjunction with a discrete graphics card in order to maximise value for money. 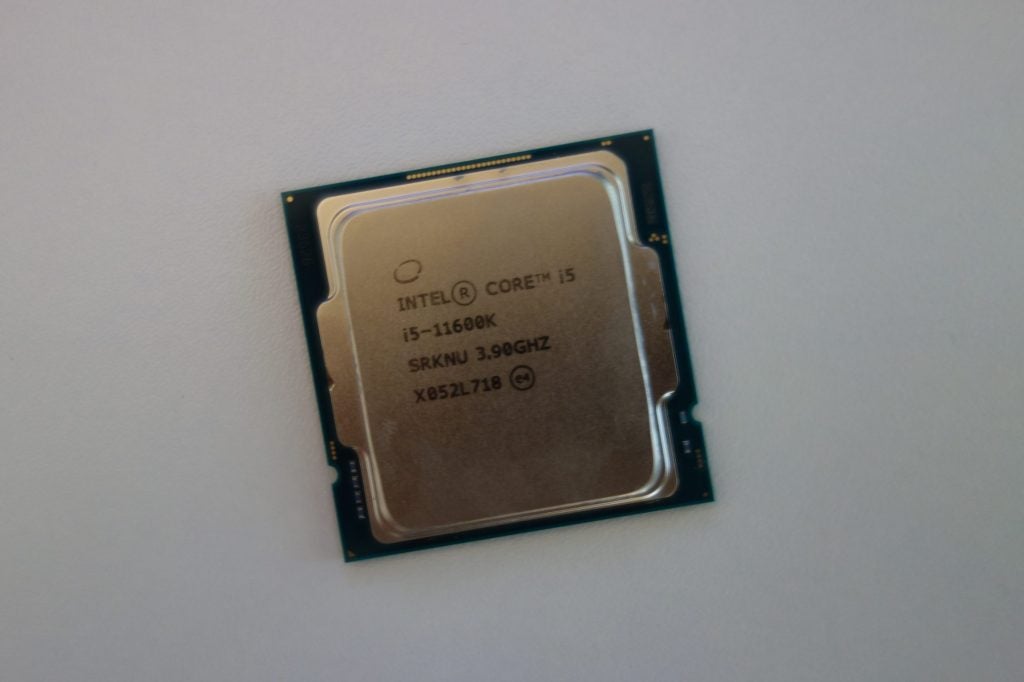 Other features that Rocket Lake brings to the table include Intel Deep Learning Boost (a new AI integration), support for up to DDR4-3200 and Resizable BAR, which improves the processor’s communication with AMD and Nvidia GPUs for a more efficient performance. It’s a solid feature-set, but nothing that gives Intel the edge over Ryzen 5000 processors.

Intel’s Rocket Lake processors will support the new 500-series chipset, which means you’ll need a compatible motherboard in order to unlock brand-new features such as support for Thunderbolt 4 and Wi-Fi 6E.

Intel Core i5-11600K test setup – How we benchmarked the processor

In order to ensure all tests were fair, I put every processor through its paces in the same system – other than swapping the motherboard when switching between AMD and Intel processors. You can see the PC build I used for testing below:

I also selected a wide variety of benchmark tests, including PCMark 10 and Geekbench 5 for overall CPU performance, Cinebench R23 for creative applications, and 3DMark Time Spy for gaming.

Unfortunately, I didn’t have access to a 4K monitor at the time of testing due to Covid-19 restrictions, but I’ll be adding 4K benchmark results when I’m able to.

It’s also worth noting that future driver updates can have a significant impact on performance, so it may not be possible to replicate my results in the future. Now, with the technical stuff out of the way, let’s get to the performance results.

The Intel Core i5-11600K is one of the best desktop processors I’ve ever seen for gaming, providing similar performance levels to the i9-11900K, despite being considerably cheaper.

However, if you already own the Intel Core i5-10600K and don’t care about PCIe 4.0 support, there isn’t a big enough generation-over-generation performance leap compared to its predecessor to warrant an upgrade.

I’ve included all of my benchmark results below, so you can see a full breakdown of this CPU’s strengths and weaknesses. 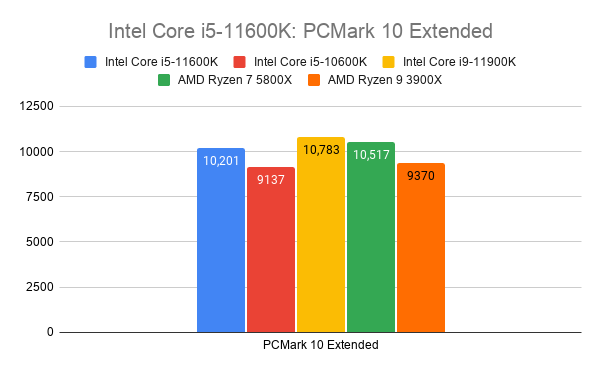 PCMark 10 is a holistic benchmark that provides an overall view on system performance. The Intel Core i5-11600K secured a respectable third-place finish in our testing, bested only by the Intel Core i9-11900K and Ryzen 7 5800X.

That’s no surprise, since the Intel Core i5-10600K and Ryzen 9 3900X are both chips from the previous generation. However, it’s useful to see the difference between each result, with the Intel Core i5-11600K taking a sizable lead over its predecessor.

But since PCMark 10 is a holistic benchmark, it doesn’t really give us an accurate indication of the specific workloads any of the processors will excel at. 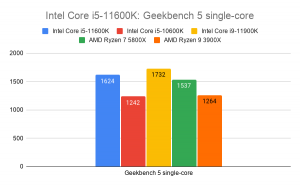 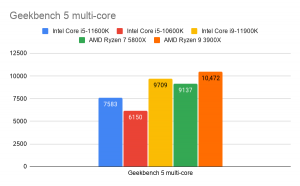 Geekbench 5 is similar to PCMark 10, in that it measures overall productivity muscle rather than focusing on specific workloads. Nevertheless, it remains useful since it breaks down the performance between “single-core” and “multi-core” to give us a better idea of each processor’s strengths.

However, it didn’t fare so well in the multi-core benchmark, falling behind both of the AMD Ryzen processors on test. With just 6 cores and 12 threads to its name, this is hardly a surprise but still a good reminder that this isn’t a great CPU for multi-threaded tasks. 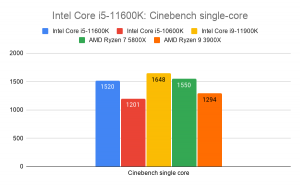 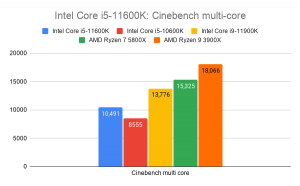 This test emphasises that AMD Ryzen processors are still the best option for creative applications. The Intel Core i5-11600K is only a worthwhile option if gaming is the priority. Cinebench R23 is essentially a more intensive version of Geekbench 5, tasking the CPU with a rendering simulation rather than everyday workloads. This means it’s a good benchmark to determine how good a processor is for content creation.

The Intel Core i5-11600K did poorly here, especially for the multi-core benchmark – but this shouldn’t be a surprise considering it has only 6 cores and 12 threads. 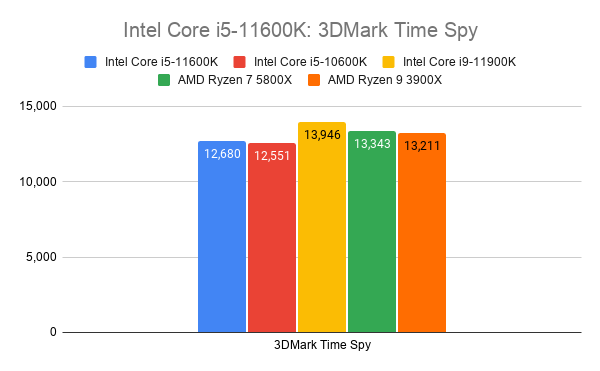 3DMark is a synthetic benchmark that evaluates gaming performance. Interestingly, this test saw both of the Ryzen chips beat the Intel Core i5-11600K.

However, further gaming tests contradicted this result. I assume 3DMark Time Spy took multi-core performance into consideration, as some games can benefit from additional cores and threads.

But as our in-game benchmark tests show, many games prioritise clock speed above all else, making the Intel Core i5-11600K a more powerful gaming processor than the 3DMark Time Spy benchmark suggests. 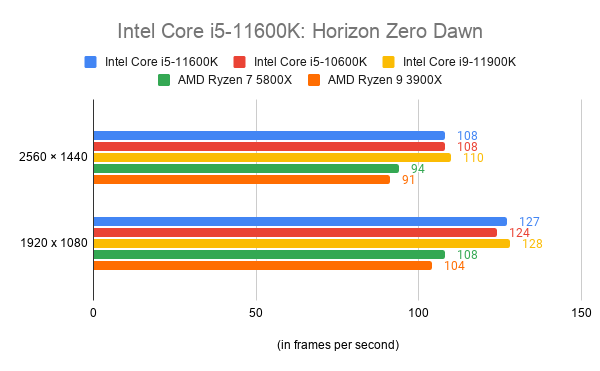 The Intel Core i5-11600K performed very well in this test, beaten only by the Intel Core i9-11900K – and that was only by a couple of frames per second. Horizon Zero Dawn is a good example of a modern action-adventure game that’s pretty taxing on your system’s components. This makes it a useful benchmark test to determine real-world performance.

Considering the i9-11900K is more than double the price, the i5-11600K’s performance is mighty impressive here and represents fantastic value. 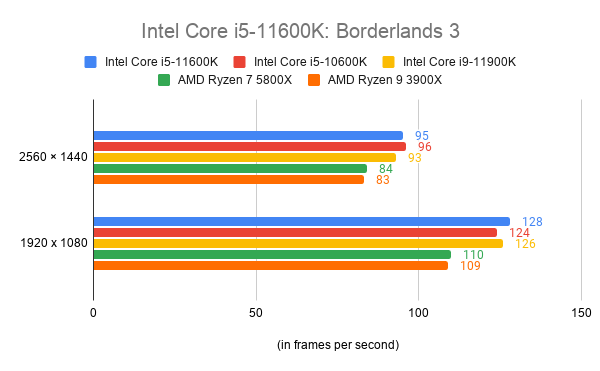 I don’t think the i5-11600K will frequently see superior results than the i9-11900K for obvious reasons, but it does prove how slim these performance margins are as there really is nothing between them.

Intel also saw a healthy lead over its Ryzen competitors, with an 18fps advantage over the AMD Ryzen 7 5800X processor. 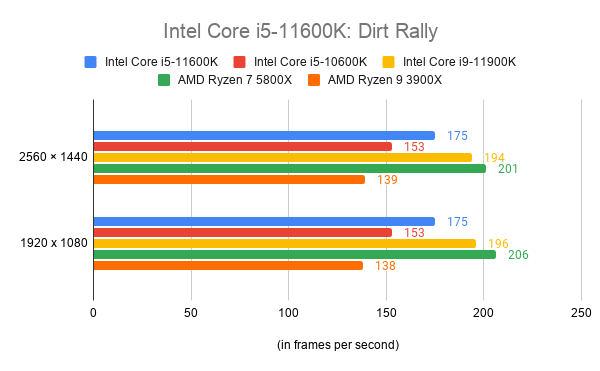 Dirt Rally is the oldest game on this list, released back in 2015. As such, it isn’t a very demanding title, and is a good example to use if you’re considering playing through your old library of PC games, or fancy using the Intel chip for eSports. 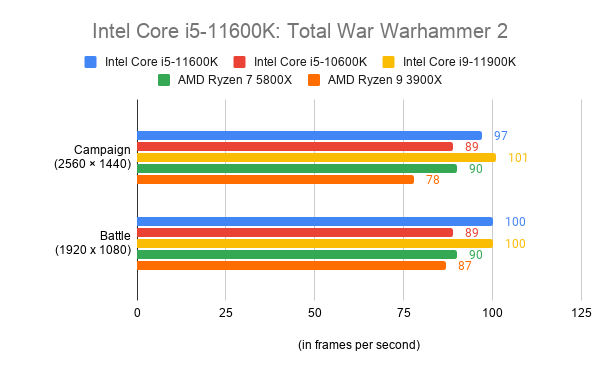 Total War: Warhammer 2 is a popular strategy game, so I decided to use its built-in benchmark for the processor group test.

The Intel Core i5-11600K performed very well here, coming in only a couple of frames behind the i9, while fending off the competition from both its predecessor and the Ryzen chips. Honestly, the performance gap isn’t big either way, but it does once again reinforce that the i5 is one of the best processors for gaming. 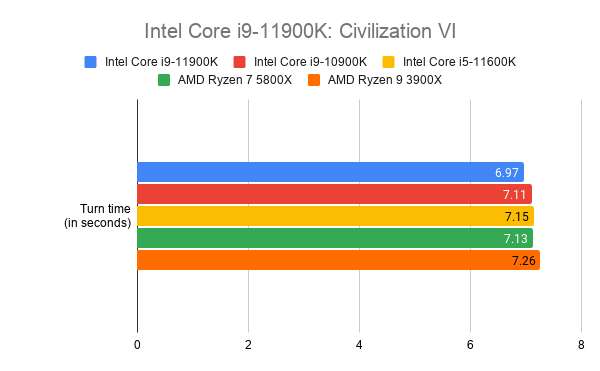 The Civilization VI benchmark is different to the rest, measuring AI turn time rather than frame rate performance. This means that a lower score is better; it means less waiting around for the enemy AI to make all of its calculations.

The Intel Core i5-11600K ranked third in this test, beaten narrowly by the Ryzen 7 5800X. That said, there’s little separating the two chips, to such an extent that you won’t notice a difference in real-time.

It isn’t just performance you need to take into account when purchasing a processor; the power draw and temperature can have a big bearing on any additional components you’ll need to purchase for your system.

For power consumption, I used a power meter to find the wattage of my entire PC system. This means the figures in the table below aren’t useful independently, but do show the differences between each processor for comparison. I found the peak power draw by running the Cinebench R23 benchmark.

The Intel Core i5-11600K has a pretty high power consumption, hitting a higher wattage than both its predecessor and the Ryzen chips during the stress test. This isn’t a big issue, but I advise checking out how much headroom your PSU has before buying this processor.

I used the Noctua NH-D15 chromax.black cooler for testing, but only equipped one so I could replicate the thermal performance of an everyday gaming system.

The results were impressive here, with the Intel Core i5-11600K running cooler than the majority of the other processors for both the idle and PCMark 10 Extended test. As such, you won’t need a super-luxurious cooling solution in order to maximise performance.

Due to time constraints, I wasn’t able to conduct any overclocking, but the low temperatures make me optimistic of squeezing more performance power out of this CPU.

The Intel Core i5-11600K is an impressive processor when it comes to gaming, delivering very similar results to the i9-11900K, despite costing half the price.

Admittedly, it isn’t a massive upgrade on its predecessor, the Intel Core i5-10600K, but the inclusion of PCIe 4.0 support to enable use with next-gen SSDs is arguably a big enough incentive to spend more for this 11th-Generation Intel CPU.

With just 6 cores to its name, the Intel Core i5-11600K can’t compete with AMD in the content creation market, but that’s not a problem at this price point. If you want a processor mainly for gaming, this is one of the absolute best gaming CPU options on the market.