The best part of the i3-6100’s specification is its single-core speed, so it’s no surprise that this affordable chip excelled in benchmarks where pure pace is advantageous.

It immediately punched above its weight in the Cinebench R15 single-core test. Its result of 156cb sits precisely between the Core i5-6400, which scored 142cb, and the i5-6600K, which scored 170cb. It’s good distance ahead of the 131cb scored by the older Core i3-4330, too – a similar chip from the last generation of consumer Core i3 parts.

The Core i3-6100’s impressive single-core performance continued in Geekbench 3. Its result of 4,119 in the single-core test is better than the 3,738 scored by the i5-6400 – a chip that’s a little slower on paper, but with more cores and cache.

The cheaper chip’s third single-threaded performance came in the Dolphin benchmark. It zipped through the test in 400s, which was miles ahead of the 540s scored by the Core i5-6400. 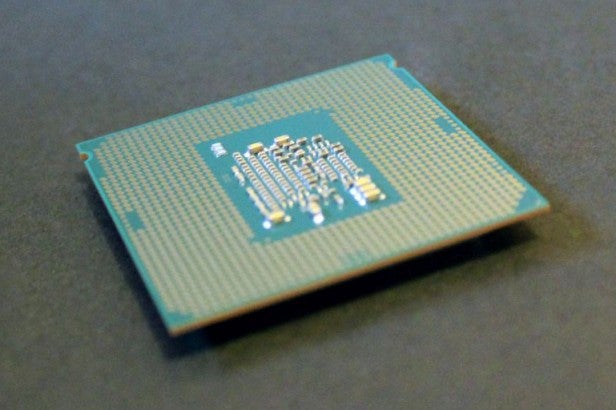 That’s a good start, but the Core i3 suffered when I loaded benchmarks that rely on multi-threaded performance.

It’s a similar story in other tests. The i3-6100 took six minutes and 48 seconds to transcode the sample video, but the Core i5-6400 was almost a minute faster. In both Wprime benchmarks the Core i3 fell behind. It was less than a second slower in the easier 32M test, but it was more than half a minute behind in the 1,024M benchmark.

When it comes to gaming, in the integrated graphics Battlefield 4 test its average framerate of 18.6fps is almost two frames beyond the i5-6400, with its slower core, and the i3 went on to average 19.29fps in Bioshock – again, almost two frames better than the Core i5.

That’s about the limit of the i3’s integrated gaming abilities, though: the Core i5-6600K and i7-6700K are both faster in the same tests.

The Core i3 chip returned mixed results in discrete GPU tests, too. Its Battlefield 4 average of 76.71fps was around a frame better than the Core i5-6400. Meanwhile its Bioshock score of 158.8fps was again ahead of the i5-6400, but unable to match pricier CPUs. That’s a mixed result, but again it proves the point that for most workloads, other than intense multi-threaded applications, fewer faster cores is arguably the way to go.

It’s tricky to make comparisons with AMD’s rival chips, because I haven’t personally tested those. That said, it’s fair to say that the Core i3 will be able to outpace its A-Series and FX competition in most application tests. Most Cinebench R15 tests indicate that both the A10-7700K and A10-7850K can’t compete with the Core i3 in single- and multi-core scenarios, and that pattern was repeated in both of Geekbench 3’s tests.

The situation is a little different with FX chips. Both of them have returned benchmark results elsewhere that show them as better in multi-core tests, but they’re a long way behind in single-core benchmarks – slower than every Intel CPU I’ve tested.

It looks like the AMD A-series APUs will open up a reasonable gap in games when using integrated graphics: in most benchmarks they’re about four or five frames better in Battlefield 4, and ten frames ahead in Bioshock. That, though, is not enough to get those games playable at much beyond their Low and Medium graphics levels.

I don’t have any concerns about the Core i3’s power consumption and thermal performance. Its power requirements are lower than Core i5 chips – and a little reduced from the last generation of Core i3 parts – so this chip won’t make ridiculous demands of power supplies. It won’t get too hot, either; the stock Intel cooler will be more than enough to handle its heat output. And it’ll be possible to cool this chip passively, too, which makes it ideal for a silent system. 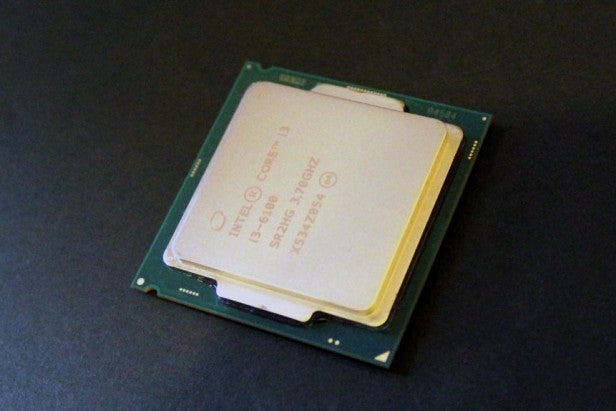 This chip is tempting, at £94, but it’s worth understanding its strengths and weaknesses before making a buying decision.

It’s a great option for a modest home machine that’ll be used for web browsing, light work and moderately challenging games. It’s powerful enough to avoid bottlenecking any of these tasks, and its single-core speed exceeds some Core i5 chips – a boon for PCs that will be used for single jobs rather than multi-tasking.

As soon as multi-threaded performance is mentioned, though, the Core i3’s modest specification is hampered. Affordable Core i5 chips are comfortably better when asked to multi-task, because of their four native cores and larger caches. That makes the Core i5 arguably a better-balanced option, and a more sensible choice for future-proofing, but then that’s why the cheapest one is 50% more expensive than the Intel Core i3-6100.

The i3-6100 is a better option than any of the AMD parts on show: it’s quicker than most of them, it’s far more efficient, and it comes with a more versatile chipset.

When it comes to Intel, though, the i3-6100 is a trickier sell. It’s a fine chip for a modest home machine because of its single-core speed, but it’ll prove limiting for a machine that needs to play tougher games or run more intensive software.

The Core i3-6100 impresses with rapid single-core performance and as such it makes for a good choice for either a basic PC or a first option for someone looking to build a Skylake system they may upgrade at a later date.