Intel’s Core 2 Q9300 processor is fabricated using the 45nm Penryn process that we first saw in Benny’s review of the Intel Core 2 Quad QX9650, which is a lovely CPU if you don’t mind forking out £480. Thankfullly, the Penryn process is also used in more down-to-earth CPUs such as the dual core E8500, which is where things get interesting for most of us. 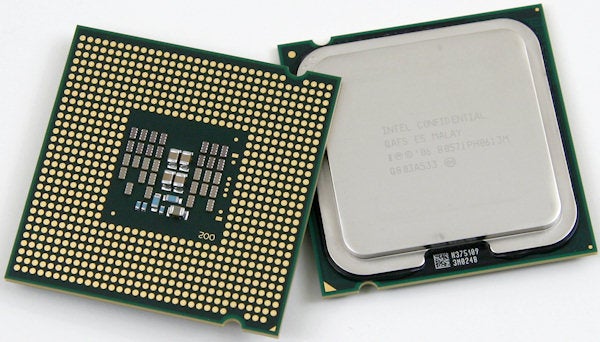 This reduction in price for the Wolfdale dual core Penryns leaves the £150+ price bracket open for affordable Yorkfield quad core processors which is where the Core 2 Quad Q9300 comes into the equation. It has a relatively slow clock speed of 2.50GHz which is achieved by a 7.5x multiplier and a 333MHz/1,333MHz front side bus which is matched by a price of £173. Now that’s cheap for a Yorkfield as faster models shoot past £200 and head for £390 with the Q9550 and upwards to £480 for the aforementioned QX9650.


Things aren’t entirely as they might appear, though, as most Yorkfields have 12MB of L2 cache with 6MB for each core while the Q9300 ”only” has 6MB with 3MB per core. The rest of the features are just as you’d expect from a Penryn which is a significant advance from the 65nm Kentsfield including support for the SSE4.1 instruction set. The move to the 45nm process has allowed Intel to reduce the core voltage from a nominal 1.3V to 1.2V, which in turn reduces the TDP from 105W to 95W. 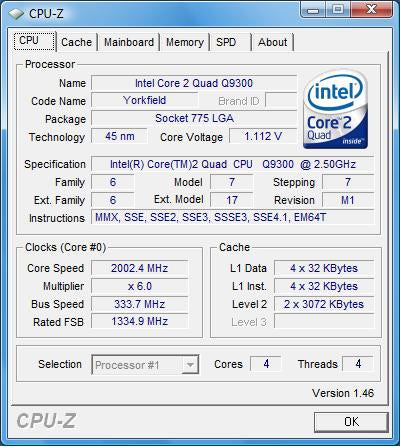 This leads us to wonder how the Q9300 compares with the Core 2 Q6600 which is our absolute favourite processor in the whole of overclockdom. We’ve had our sample of Q6600 for the best part of a year and it’s done sterling service overclocking from its standard speed of 2.4GHz to the dizzy heights of 3.4GHz. Scour the web and the Q6600 crops up time and time again as a champ of a processor and its appeal isn’t hurt one little bit by price cuts that have taken it below £120. Indeed, Intel is taking the fight to the 65nm AMD Phenom by slashing the prices of its own 65nm models and Q6600 is in the thick of that particular battle. Moreover, the Q6600 wipes the floor with Phenom; period.

We tested the processors using the Biostar TPower I45 we just looked at, as it happened to be on the test bench. You need to handle the figures with a modicum of care as we have been giving the WD 300GB VelociRaptor a work-out so the hard drive figures in PCMark05 are higher than you might expect. The other point worth mentioning is the issue of memory speed that came up in the Biostar review as the thing is incapable of running memory at a speed of 1,066MHz so we had to leave it on 800MHz.

Provided you take the figures in this review in isolation things will be fine but if you use either of these processors on your own P45 motherboard you’ll likely find you get better memory performance while your hard drive will be slower.


When the processors were working flat out in POV-Ray the Q9300 had an edge but it was almost entirely due to the extra 100MHz of clock speed and it was the same story in PCMark05. If you have no plans to overclock your processor then you’ll see no extra performance with a change from Kentsfield to Yorkfield but the difference in power consumption is startling as the faster Q9300 draws 40W less than the Q6600 when the systems run POV-Ray.

When it comes to overclocking the two processors behave quite differently. The Q9300 will run a front side bus of 430MHz which is almost exactly 100MHz more than the stock speed of 333MHz. The multiplier has to be dropped from 7.5x to 7x but we had no need to tinker with the Voltage settings for the chipset and processor. When we tried to push the front side bus to 450MHz we found that extra power made no difference and the speed remained stubbornly fixed at 3.01GHz.


It was a different story with the Q6600 which also tolerated a front side bus increase in the order of 100MHz. We raised it from 266MHz to 380MHz and left the multiplier at 9x for a clock speed of 3.42GHz. That’s an overclock of 1GHz for the Q6600 and 500MHz for the Q9300 however the performance of the Penryn was significantly faster than the Kentsfield. The other numbers that jump off the page are the power consumption figures which don’t change much for the Q9300. At idle it’s a mere 5W and under load the overclock only costs 25W or to put it another way the overclocked Q9300 draws less power than the standard Q6600.

With the overclocked Q6600 loaded to 100 percent with POV-Ray the system draws a shocking 310W which is a full 125W more than it drew at stock speed. You won’t be surprised to learn that we had to crank up the fan speed of the CPU cooler but it was relatively easy to keep the processor at a healthy 45 degrees Celsius. During PCMark05 the processor load was less extreme and the power draw was a ‘mere’ 260W.


The Q9300 may sound relatively expensive compared to the Q6600 but it’s well worth the extra money. Kentsfield is history and Penryn rules the heights.