I still remember the strange looks I used to get from my friends, when I told them I had a computer with two processors. Yet now, PC World is advertising the benefits of Core Duo architecture on nationwide television. Granted it has cringe-worthy references such as “RAM Memory” (Random Access Memory Memory apparently…) and I don’t think it explains the benefits of multi-cores properly, but it’s an odd feeling to have the masses running what used to be reserved for high end workstations and servers.

Core 2 Duo has been one of the most important launches for Intel in quite some time, really taking back the Desktop market by storm. Yet, even when I was in Germany at a pre-launch briefing of Conroe/Core 2 Duo, Intel suggested that quad core wasn’t far off either. In fact, the computer being used for the PowerPoint presentation, was in fact Kentsfield – Intel’s code name for its quad core processor. Not particuarly good use of resources, but an excellent demonstration of the state of play.


November has come around, and true to Intel’s word, quad-core is here. It seems like only yesterday we were marvelling at the first dual-core solutions, so to have a “quad-core” processor in front of me, seems almost surreal. However, in actuality, this isn’t as much of a technological feat as you might think. Eighty cores, as demonstrated at IDF, is… 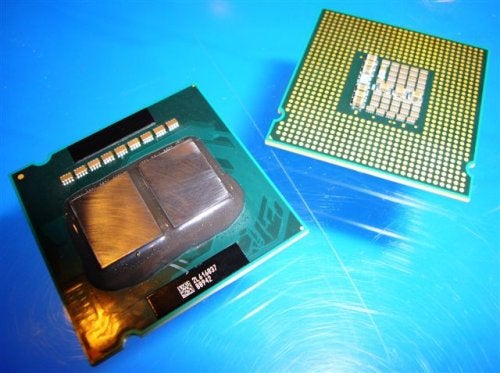 Above you can see what Kentsfield looks like, before the heat spreader is put on top. This is a very telling picture, as what you can see is two completely separate dies. Conroe is a single die, but two cores working intelligently together, sharing cache and getting things done in an efficient manner.


As you can see above, Intel has basically taken two Core 2 Duo dies and just put them in to one package. I think Intel realises that this is cheating a little and that’s why the product name is Core 2 Extreme QX6700, which apart from the subtle “Q”, doesn’t mention quad anywhere in the name. This is an Extreme Edition processor, so is naturally expensive, initially priced at $999. This isn’t far off the current price of an Core 2 Extreme X6800 (£643), so in comparison, it’s pretty good value.


Technically speaking, the fact the cores are in the same package is irrelevant. In order for data to be communicated between the two dies, the data needs to go through the North Bridge, via the Front Side Bus. Essentially, it means the performance will be identical to having two separate processors in two separate sockets. 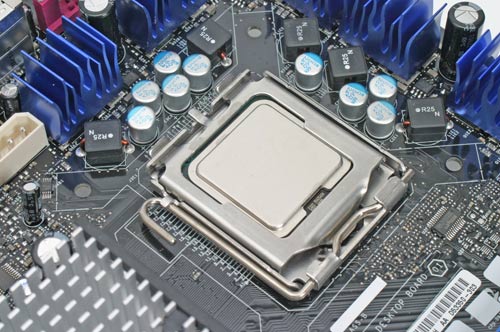 Intel’s approach does have its benefits though. For one, by having all four cores in the same package, there is only one heatsink. Any boards that currently support Core 2 Duo, will support Kentsfield as well. In saying that, we had to update the BIOS on our Gigabyte 965P motherboard, in order to get it to boot. It also makes designing a decent motherboard a lot easier and means we can expect to see quad-core hitting the MicroATX platform.

The chip we were sent, was the Core 2 Extreme QX6700. This is basically two Core 2 Duo E6700 processors on the same package. Each core runs at 2.66GHz, with each pair of cores sharing 4MB of cache. Being an Extreme Edition, unlike the E6700, it is fully multiplier unlocked. I didn’t do any overclocking myself, unlike our sister publication, Bit-Tech but what I can say is, the more cores you have, the lower your chances of a high overclock. All you have to do is have one core that can’t quite cut the mustard and that will cripple your overclocking ability. What is worth noting, is that it was running exceptionally cool considering there were four cores, at around 15 degrees above ambient. 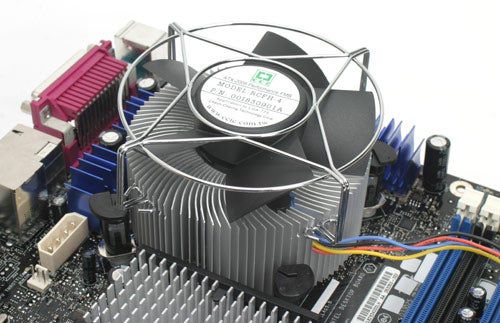 For testing this chip, I took our SpodeMark2D suite, which was coded for our Core 2 Duo launch and compared to a Core 2 Duo E6700 and a Core 2 Extreme X6800. I did however, adjust the coding slightly, to use four threads instead of two. SpodeMark2D performs every day tasks, such as adjusting photos in Photoshop Elements, encoding video using XviD, encoding and decoding MP3 audio and file compression and decompression. You can read all about this in the original article.


Quad processors and higher have been around for a while, so there is nothing new here. And a lot of software, once designed to be multi-threaded, will be compatible with two, four or more processing units. However, it is worth remembering that as you add more processors, you also get diminishing returns.


Considering processing power has doubled, we should be seeing more scaling than this. The likely scenario, is that these particular (and I might add – typical) applications just don’t take advantage of four cores properly yet. What is most surprising, is XviD, which scales very well from one to two cores, doesn’t scale well from two to four. Perhaps other encoders will have better performance.


Interestingly, in audio encoding/encoding, the Core 2 Duo E6700 was sometimes faster. This suggests that either the coding is not particularly equipped to handle four cores, or that there was latency introduced in cross-communication through the North Bridge.


When comparing to the Core 2 Extreme X6800, which is similarly priced, we can see that for most cases, you are better off going for higher clocked dual-core, than you are for quad-core at a lower speed. 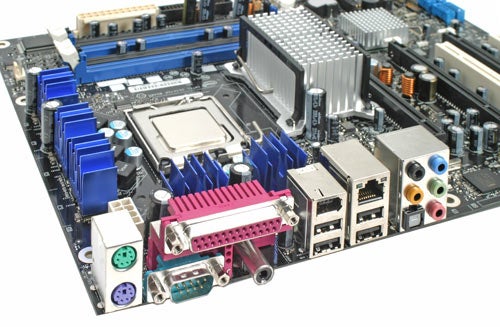 
Extra two cores aside, there is nothing new on display here. This is the same Core 2 technology, just put together in a neat package. Very few people will need quad cores, as demonstrated by our results, but also through pure common sense. With DirectX 10 removing even more CPU overheard, as a gamer, one has to question the need for four cores right now. However, it’s here, and it works as well as current software allows. So for anyone who wants the very best, look no further. Considering what you’re getting, the price isn’t actually too bad either!