What is the Intel Compute Stick?

Intel has created a cheap, basic desktop computer that’s small enough to fit inside your pocket. The Intel Compute Stick plugs into any monitor or television with an HDMI connection, so you can take your pictures, documents and presentations around with you practically anywhere. It also runs your choice of operating system, with Windows and Ubuntu supported.

However, the Compute Stick feels like it’s very much in its experimental phase. While promising, we’re not convinced it’s polished enough to warrant you dipping into your pocket. For now, anyway.

Intel hasn’t yet revealed UK pricing, but the Compute Stick is available for $150 in the US 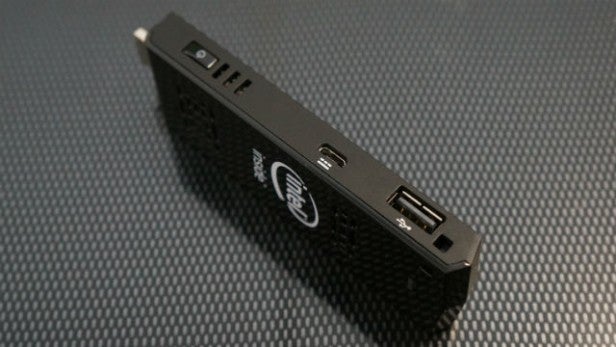 Strictly speaking you could consider the Intel Compute Stick a desktop PC, but it looks very un-desktop-like. It’s essentially a small black box dotted with holes and ports, and branded with a clean, white Intel logo.

It’s a funky-looking thing that immediately catches your eye, and it’s tiny. Around the same size as a chocolate bar, it comfortably fits in the palm of your hand and, more importantly, tucks neatly away behind your monitor or TV. Many would instantly think it a USB stick, but the protrusion at the bottom is an HDMI connection not USB.

Technically speaking, the Compute Stick is a nonahedron (nine-sided), with a front face shaped like an irregular pentagon. This front face is also covered in shiny plastic, while the other eight sides are matte. Similarly, all corners and edges are sharp and pointy, apart from the one at the foot of the front face, which is gently curved.

Sandwiching the Intel logo are two ugly-looking grilles, which admittedly detract from the Stick’s looks, but they help keep it cool and it’s not as if you’ll have to stare at it constantly. 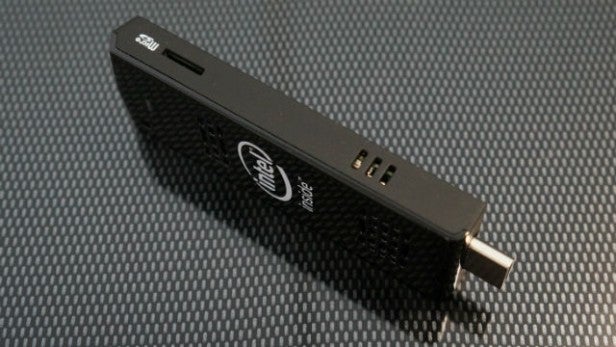 Intel’s instructions paint a picture of glorious simplicity, merely telling you to plug the Stick into a HDMI port on any monitor or TV and enjoy the fruits of your minimal labour. However, it’s a little tougher than that.

Plugging it into a compatible monitor is easy, and Intel helpfully includes a HDMI extension cable in the box if the back of your screen is a little overcrowded. There’s also a power cable, though it’s relatively short and you’d struggle to reach a socket that isn’t in the immediate vicinity of your monitor or TV.

We had to switch the Stick on and off again several times before it finally took. We’re not entirely sure why this happened, but it left us scratching our heads for a little while.

Foolishly thinking we’d vaulted the biggest hurdle, we then stumbled headlong into another. The Compute Stick only features one USB port, which is problematic if you don’t already own Bluetooth-enabled peripherals. We had a Bluetooth mouse to hand, but not a Bluetooth keyboard.

Intel says that you ‘might’ need to temporarily connect a wired mouse or keyboard to the Intel Compute Stick, in order to pair Bluetooth devices. This is an understatement, since you can’t wirelessly connect to the Stick until you’ve actually logged in to the computer and turned on Bluetooth.

We decided to go down the keyboard avenue and, after a load of pushes of the Tab, Enter and arrow keys, eventually made it through the standard Windows 8.1 setup process. Once logged in, we were able to connect our Bluetooth mouse in no time. 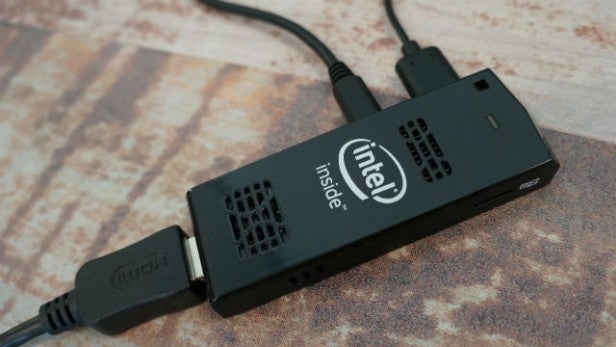 The Compute Stick is designed for light use, such as word processing, browsing the internet and watching TV. The Windows 8.1 version is powered by the quad-core Intel Atom Z3735F processor, clocked at 1.33GHz, paired with 2GB of RAM. The Ubuntu alternative, meanwhile, has 1GB of RAM.

When Intel references ‘light use’, it really means it. Boot speed is okay, rather than impressive. You can get from off to the desktop in a minute, but no quicker than that. This is unfortunately indicative of everything else offered by the Compute Stick.

Basic tasks, including the three listed above, are smooth sailing, but performance drops as soon as you start multi-tasking. With 10 tabs open in the Chrome browser, including YouTube, we immediately felt the suffocating limits of the Compute Stick’s abilities.

While not quite crippling, lag became obvious, with the mouse pointer sometimes freezing and a delay appearing between typing on our keyboard and letters appearing on-screen. After leaving it on for a night, these issues were even more pronounced the following day.

It scored 1,623 in the Geekbench 3 benchmark test, ranking it far below modern computers for speed. It fares better in PCMark 7 Pro, however, with 2,300. That places it in the same bracket as the Asus Transformer Book T100 and Toshiba Satellite Pro R50.

The Compute Stick also gets very warm very quickly. This is not only concerning when you touch it, but causes the internal fan to crank into life. It’s a tiny component, but creates a shrill whirring noise that’s tough to ignore after you notice it for the first time. This would explain the sluggish performance, too, as an excess in heat will cause the CPU to throttle from time to time.

Another potential issue that can slip under the radar is the Compute Stick’s lack of speakers or headphone jack. If you plan on watching TV shows or listening to music through it, but don’t have a TV to hand, make sure your monitor has inbuilt speakers or a headphone jack. 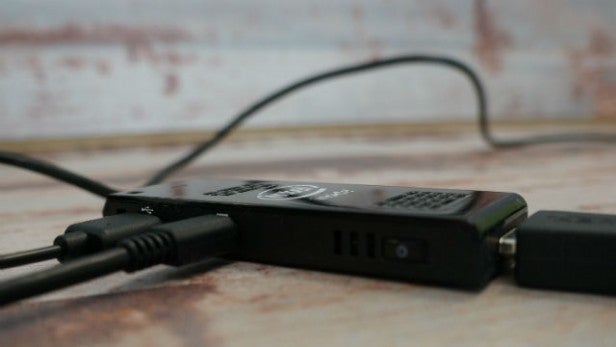 Being as small as it is, you’d imagine that connectivity might be an issue for the Compute Stick. You’d be right. While Intel’s done a good job of squeezing in a good variety of ports and connections, it’s only managed to fit the Stick with a solitary USB port.

That’s an issue, and one that prospective owners of the new 12-inch MacBook will be all too familiar with. As we mentioned earlier, it makes the setup process a faff, and requires you to either invest in a Bluetooth-enabled set of peripherals or a USB hub. There’s simply no other way around it.

The Windows version of the Compute Stick version has 32GB of inbuilt storage, while the Ubuntu version squeezes in just 8GB. Fortunately, both can be supplemented with a little extra space for your files, via the microSD card slot. Both also have Bluetooth 4.0 and 802.11 b/g/n standard Wi-Fi. 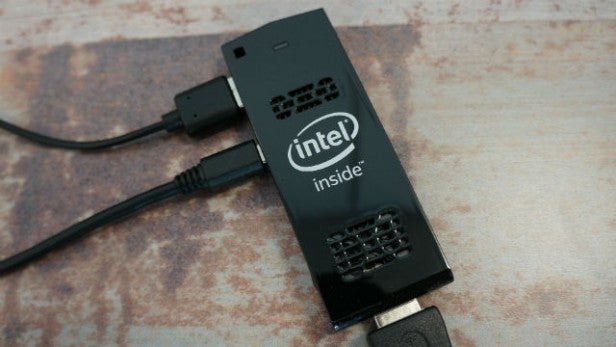 Should I buy the Intel Compute Stick?

Not in its current incarnation. The Intel Compute Stick is exciting, but it’s more of a concept than a complete product.

We can barely fault its eye-catching design, but every other aspect of the Compute Stick is somewhat flawed. Performance is limited, while the setup process and general use is adversely affected by the lack of a secondary USB slot. You also have to ensure the screen you plug it into has its own speakers.

Right now, it’s a tempting purchase for computer enthusiasts, especially for $150 (£100), but not quite the super-convenient mini desktop regular consumers might want.

We’re looking forward to seeing what the second edition is capable of.