We were seriously impressed by INQ’s first mobile phone, the INQ1. It was a cheap, simple slider phone that slickly incorporated a number of social networking features as well as Skype calling and was available on 3 on some very tempting web oriented tariffs.


A few months down the line and we now have the successor to the INQ1, the INQ Mini 3G. Like its predecessor, it focuses on providing the cheapest, simplest route to all your social networking favourites, so includes apps for Facebook, Twitter, Skype, and Windows Live Messenger and is available either for free on a £15 per month contract of for £59.99 on pay as you go. On contract you get free Internet (including Skype calls), free calls to other 3 network users, free voicemail, and 75 minutes of regular calls, while on pay as you go Skype calls are free and you get a good portion of free Internet access as well – mileage varies depending on how much you top up at a time. 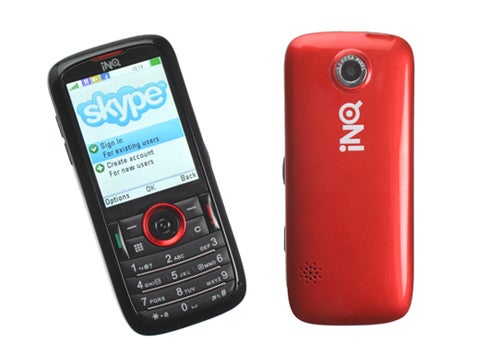 Unlike the INQ1 this is a candybar phone with a fixed keypad, which sits below the 2.2in LCD screen. Its dimensions are just 46 x 13 x 103mm and it weighs a thoroughly featherweight 90g, so those that like their mobiles small and unobtrusive will certainly be fans. That said, the somewhat garish design may put off some of you, though we’re inclined towards thinking its quite cute.


Unsurprisingly, considering its price, build quality isn’t outstanding with all visible parts being made of plastic and general manhandling of the device revealed a few creaks and wobbles. However, none of this leads us to be genuinely concerned that it will fall apart at the drop of a hat. 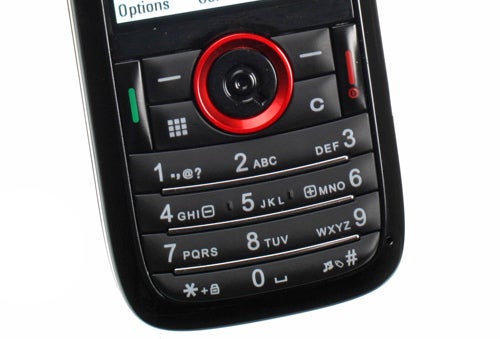 Keys are arranged in a fairly typical manner, with call answer and call end/home buttons flanking two soft keys, a menu button, and a delete/clear button, while in the centre is a circular D-pad with a central confirmation button. Below these sit the number pad, which is laid out in a fairly conventional style. All buttons are somewhat stiff and don’t have the most purchase-friendly coating, but nonetheless we were able to use them all without too many complaints, despite the number pad keys being joined in horizontal rows.


Above the keys is the screen that sports a resolution of 240 x 320, which is typical for such a cheap handset. It’s quite bright and vivid and was easily visible in bright sunlight, however viewing angles aren’t great with colours and contrast dropping off noticeably. 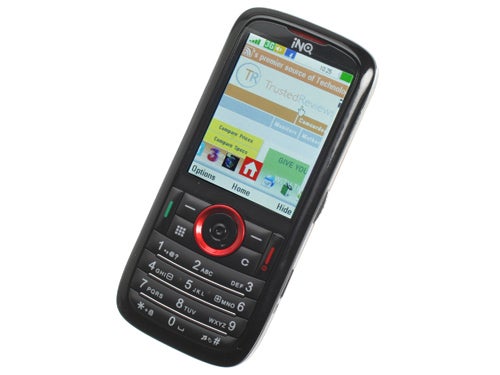 More worryingly for such an Internet centric handset, though, is the sparsity of information you can fit on screen. While the web browser supports full web pages, browsing round them is a tortuous task as you can’t easily zoom in and out (and there’s no landscape mode to eek a little more space out) and otherwise only see a tiny portion of the page at one time. For websites with mobile viewing modes its less of a problem and you can use a ‘fit to screen’ viewing mode for other sites, but this still isn’t ideal. All this said, for a £60 handset we wouldn’t expect much more and it’s good enough for emergency use.

On the back is a two megapixel camera that lacks both autofocus and a flash so is of limited use. It’s fine for a quick snap of your mates doing something silly, but you’ll have to be sure it’s in good lighting as anything else will be blurry and noisy beyond belief. Video is also available, but again is very low quality so will only really be of use in daylight and when your subjects aren’t moving around too much. Unfortunately the handset was collected before I had a chance to transfer the shots I’d taken with it to a computer, so you’ll just have to take my word for it. 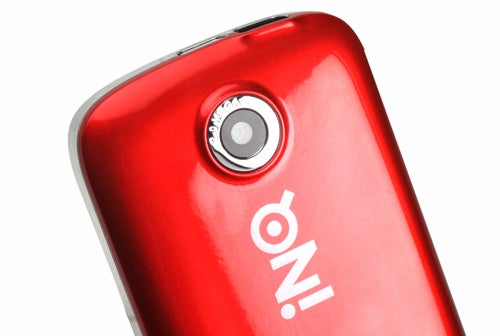 One of the features we most appreciated on the INQ1 was its MicroSD slot, and we’re glad to see INQ has managed to retain this on an even cheaper phone. This makes it easy to take your photos and videos from and add music to the phone. Then again, considering you’re limited to using the bundled headset for music listening (for which it’s pretty rubbish) the idea of using this as a regular mp3 player is one we would discourage.

We were surprised to find a fairly sizeable 1,150mAh battery in this phone as that’s larger than some we find in much larger and feature rich smartphones. We were thus a bit saddened to find quoted talk time was only 3.5 hours, despite standby time being an impressive 11 days. In our tests, where we were regularly using the phone for web browsing, Facebook checking, music listening, and photo taking over the course of a few days, we managed to get four days out of it and a full week should be possible with light usage.


The INQ Mini 3G’s interface is much the same as that of the INQ1, with a single desktop upon which you can have three widgets selected from a fairly limited range including things like a large clock display, RSS feeds, and weather. Below this is a horizontal carousel of shortcuts to some of the phones main messaging features that 3 refers to as the ‘switcher’. Shortcuts include Facebook, Skype, Twitter, Messenger, Mail, Search, and the 3 content portal, and you can add five more shortcuts including links to websites. This carousel is particularly useful as it can be brought forth while in other applications by pressing a button on the side of the phone. This enables you to, for instance, check something on Facebook while in the middle of writing a text message. Once done you can just press the back button and go back to the message you were writing.

The main menu, activated by the front button with the grid of squares, brings access to the phones settings, the general message folder, the camera, music and video players, and web browser. It’s a fairly garish menu but is ultimately practical, though a little slow. Other apps include an RSS feed reader, alarms, calculator, notepad, stopwatch and voice recorder. 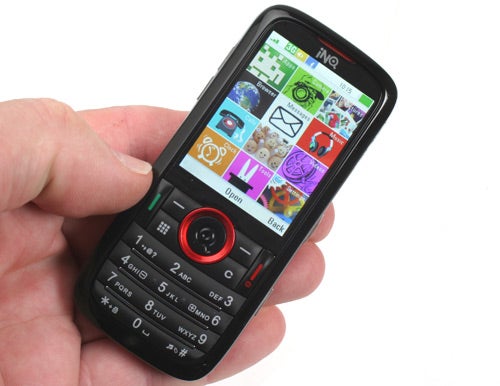 Of course, the main feature of the INQ Mini 3G is the Facebook and contacts integration. How does this hang together? In a word: perfectly. When adding Facebook contacts you’re prompted to select which Facebook contacts to import to the phone, then by what means (phone, Facebook, Skype, etc) you’d like to contact them. It’s as simple as that. Unfortunately, due to the pre-launch nature of the software we were testing, we weren’t able to sign-in properly to Windows Live Messenger, so couldn’t test this feature. However, Skype works just as well as on the INQ1 – no surprise given the software is the same.


The INQ Mini 3G isn’t for everyone; it’s far too low on features for those that want a true mobile web experience and it’s a bit complicated for those that just want a simple cheap phone. However, if you can’t afford the former and just want to make sure you’re never out of the social loop, then you should definitely consider this phone. Especially if buying for teenage sons and daughters.


”’Update: We mistakenly thought this phone didn’t have a MicroSD slot but have since been informed that it does. We have thus rewritten the paragraph that pertains to this issue and have raised the features score from 6/10 to 7/10.”’