Bad news – InnerSpace isn’t an adaptation of the classic 1980s Joe Dante movie, where a microscopic Dennis Quaid is injected into hapless store worker, Martin Short. Instead, it’s an arty exploration game in the style of Journey, ABZU and Oure. In fact, it’s a bit of a combo of the latter two, mixing the mythology-meets-sci-fi vision of ABZU with the free-flying action of Oure. However, InnerSpace is even weirder than both.

You play the Cartographer, a sentient flying drone in the service of a puttering AI submersible: the Archeologist. Your boss has built and awakened you to help discover the secrets of the InnerVerse, a series of connected worlds built by some long-dead race of ancients.

However, the worlds of the InnerVerse aren’t like our own. Each compact world exists in the interior of a sphere, like the planets of Super Mario Galaxy turned inside out. Seas flow around the surface; strange monuments stretch into the skies. Caverns and tunnels may stretch out underneath, while glowing towers turn out to be hollow inside. And are you really alone, or is there something slumbering somewhere out of sight? To find out, you’ll have to explore.

And so you fly around, collecting blobs of ‘wind’, the energy that powers the technology of the ancients, slicing through the stands that tie things together and clipping giant switches that might start long-dormant mechanisms. You’ll also collect relics, giving the architect new information. They unlock new forms, or airframes, for you to inhabit, plus handy modifications to make you speedier, more robust or more manoeuvrable. Some even allow you to travel underwater.

Eventually you’ll open portals to explore new worlds, all the time learning more about the ancients, where they went and whether you can follow. 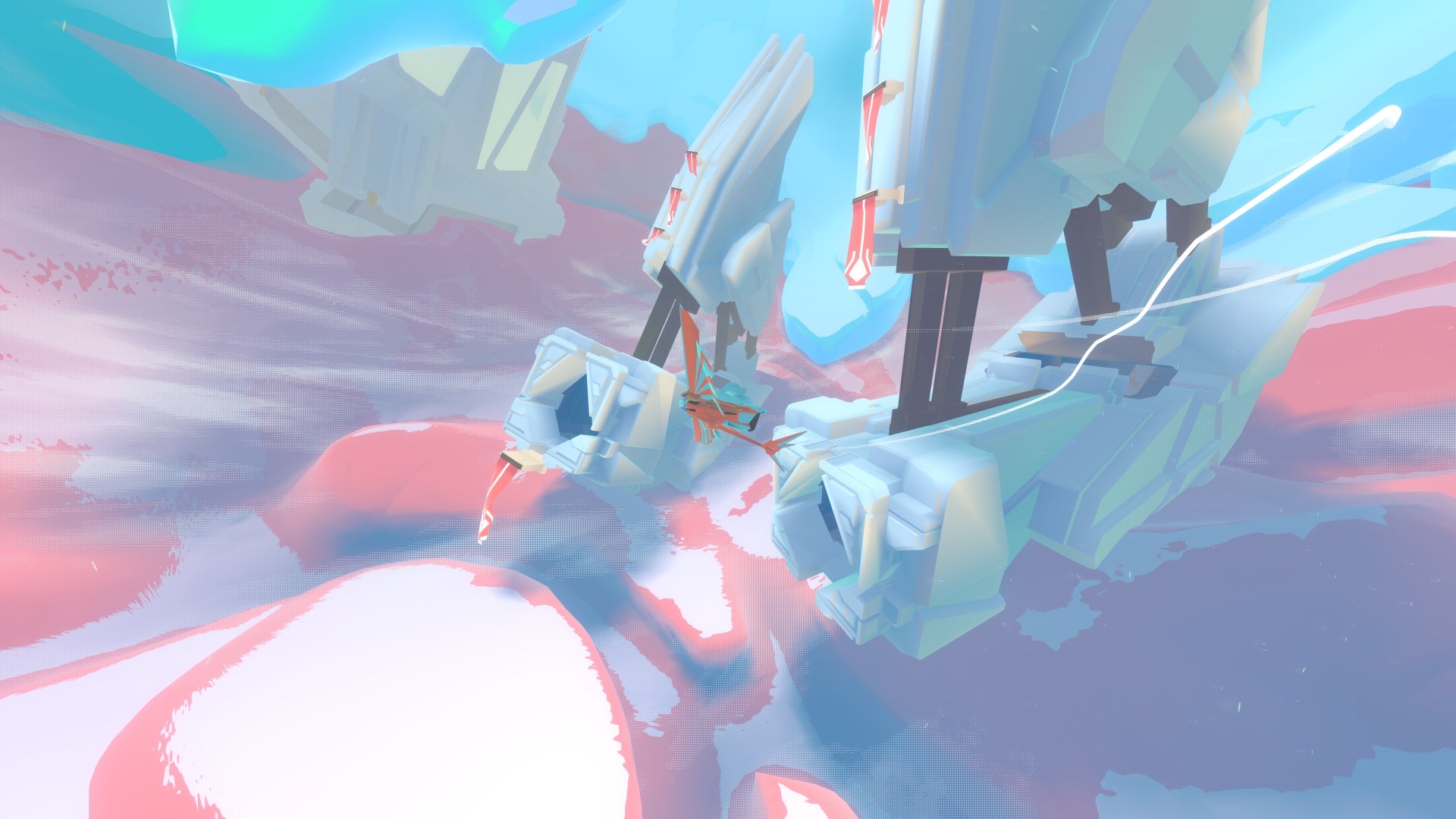 This isn’t a game of fast-paced action. There’s nobody to shoot and nothing to shoot at them with. And while there are parts that will challenge your developing flight skills, this isn’t really a test of aerobatics and agility. Instead, InnerSpace is a slow-paced game of discovery and mystery, working out where you can go and what you can do as you bring dead worlds back to life.

The story it tells isn’t particularly emotive, but it’s intriguing. You want to know more about these worlds, who built them and what happened. Yet InnerSpace’s greatest strength is the same as that of ABZU: every now and then, it delivers moments of real mystery and wonder. Something you thought was part of the scenery turns into something else entirely. Ruins spring to life in an array of light and colour.

What’s more, the worlds themselves are strangely beautiful, thanks to another spin on the popular Journey art style, where detail is scant but there’s a harmony in the forms and glowing hues. I’ve been playing the game on Nintendo Switch, and both on the TV and the smaller handheld screen InnerSpace looks lovely. This is despite the occasional drop in frame rate and a slightly annoying dithered pattern on transparent objects, presumably to keep the frame rate up.

In it’s best sequences, where the visuals, the gameplay and the warm, responsive score come together, InnerSpace is gorgeous, weird and otherworldly. It’s a psychedelic Roger Dean album cover come to life. 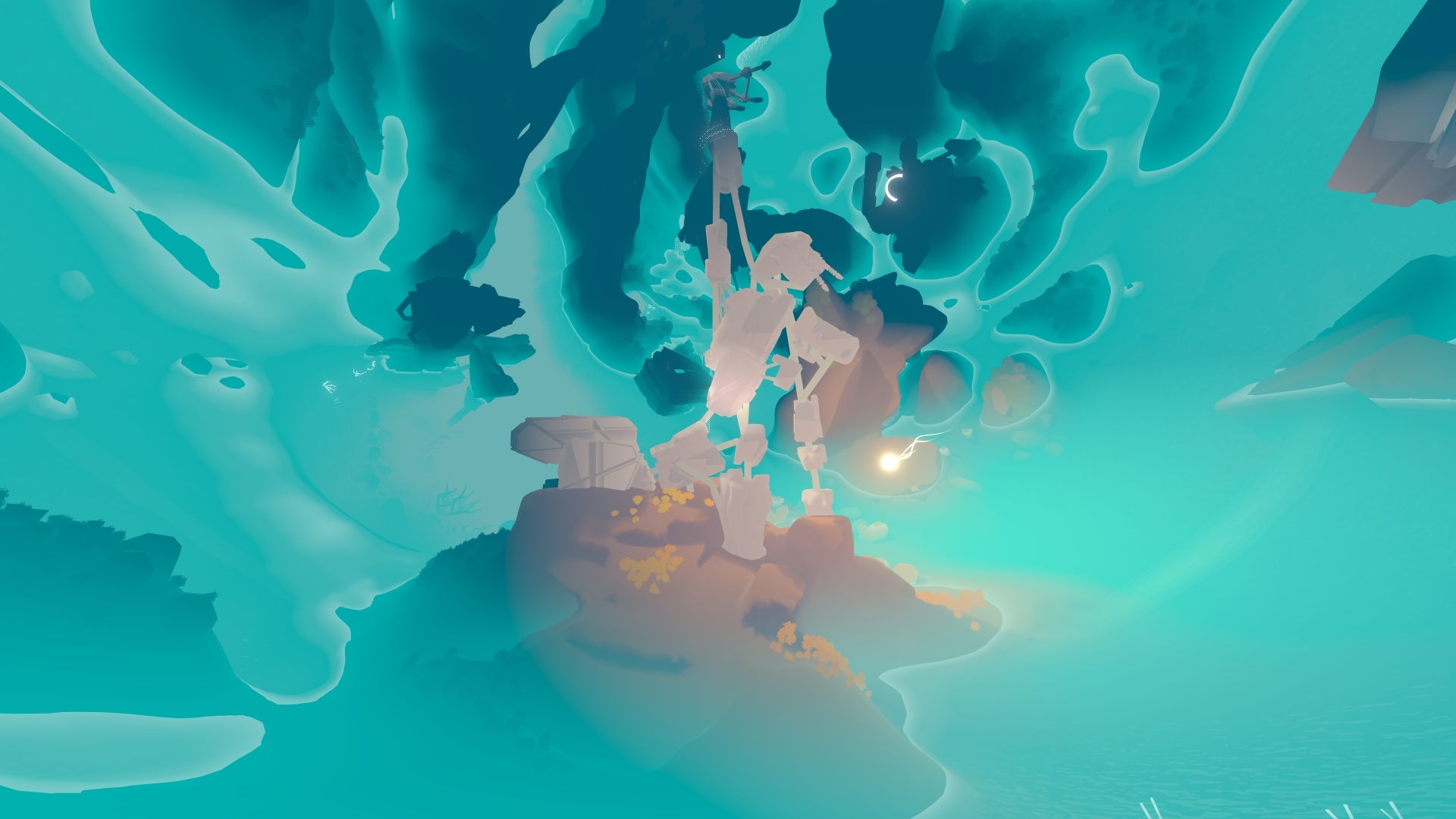 As with so many games of this ilk, however, it’s held back a little by the gameplay. Let’s not be too downbeat – there’s more to do here than in Oure or ABZU; and a lot of it is more compelling. But the handling of your airframes doesn’t give you a great sense of soaring or gliding, while there isn’t much you can actually do beyond flying into switches, strands, breakable surfaces or strange sticky bubbles.

InnerSpace has a series of great settings, but you can’t help wishing for the feel of flying and the invention that Nintendo’s more prosaic PilotWings games had in spades.

What’s more, there isn’t always an obvious logic to what you have to do in each of the game’s worlds. Up to a point, it’s all about observation, gliding around, looking for trails of wind, audio cues and hints of movement, using the ‘perches’ that you can temporarily dock in to sit and watch before launching off again.

However, you can sometimes spend ages drifting, trying to find a way into a structure or some area of the world that you haven’t glimpsed. I pride myself on figuring out such games for myself, but at several stages while playing InnerSpace I had to consult a walkthrough supplied by the developers.

To be fair, there’s always some signposting when you activate something to push you towards the next step; but if you struggle at all to orient yourself – and this is a deliberately disorienting game – you could have a fair bit of searching around to do.

In the end, that’s to be expected in an exploration game, and it doesn’t really bother me that much. Maybe this is because InnerSpace is an oddly relaxing game, where you don’t feel the need to rush around and solve everything immediately. There’s always something else you can find if you’re willing to pause, look carefully and enjoy what these alien landscapes have to offer. Without this and the optional collectibles, you could probably clear it in a couple of hours – but why spoil it? Take your time. Chill out. Unwind.

InnerSpace can’t quite reach the heights of a RiME or Journey, but it’s a meatier and more compelling game than ABZU or Oure. There’s something genuinely chilled-out about its alien vistas and lazy exploration. It’s no thrill ride, but a thoughtful, mysterious adventure with moments of real wonder. If you’re in the mood for something different, give it a go.