In our tireless efforts to bring you the lowdown on all manner of network storage we’ve seen just about every kind of NAS appliance the consumer and small business market has to offer. Some have been good and some not so good but the latest ReadyNAS NV from Infrant Technologies looks like it ticks all the right boxes. The company specialises in entry-level NAS appliances and visited TrustedReviews around a year ago with the NexonNAS 1000 which offered an impressive range of features but at a price the wrong side of four figures. The ReadyNAS NV looks to remedy that as it also delivers a healthy 1TB of raw storage but at a substantially lower price.


A key feature is support for hardware managed RAID arrays. The appliance uses Infrant’s own IT3107 network storage processor which delivers four SATA interfaces plus support for hardware-based RAID-0, -1 and -5 arrays along with Infrant’s unique XRAID technology. You also get hot-spare and hot-swap capabilities and a Gigabit Ethernet network port as well. Infrant’s RAIDiator Linux kernel is implemented on a Flash memory chip on the controller board which means that, unlike the Buffalo TeraStation Pro, you can purchase a diskless version (£534.57 inc. VAT) and add drives as required. 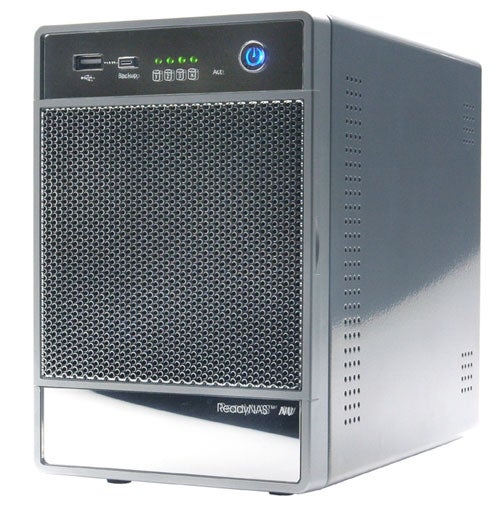 Measuring a mere 200 x 132 x 222mm the ReadyNAS NV is most definitely one of the smallest appliances around. Design and build quality are particularly good with the internal chassis constructed from solid steel and enclosed in heavy duty metal panels. Another bonus is that the 256MB SO-DIMM module is accessible underneath the top panel and can be upgraded to 1GB. However, Infrant advised us that although this will allow the appliance to cache more data it won’t make any major improvements to performance.


Infrant’s XRAID technology is very interesting as it allows you to kick off with one drive and add more as required. Coined automatic volume expansion, the appliance simply adds the new drives to the XRAID array as they are plugged in. It also comes into its own if you want to upgrade capacity as this can be achieved without taking the system offline. This must carried out one drive at a time but you can pull a drive out and replace it with a larger one. Once the array has been automatically resynchronised you do the same again until all four have been swapped out. This sounded too good an opportunity to miss here in the lab so we tested this using a quartet of 500GB Hitachi Deskstar 7K500 SATA drives. Prepare for a long wait as the array rebuild and synchronisation process for each drive took nearly seven hours. Even so, by the following evening we had a new appliance with 2TB of raw capacity and no time was it necessary to take the unit offline.

The bundled RAIDar utility displays all discovered appliances and provides direct access to the secure web browser interface. The appliance supports Windows, Unix, Linux and Macintosh clients and it’ll also function as an FTP server. Backup features are extensive as volume snapshots can be scheduled to run at specific times of each day. You can also schedule a multitude of backup tasks and select any location on the appliance as a source, while for a destination you can use another local location, a different ReadyNAS appliance or even a remote network share as a destination. Workstation data can also be secured directly to the appliance at scheduled intervals with the bundled Genie Backup Manager Pro utility. 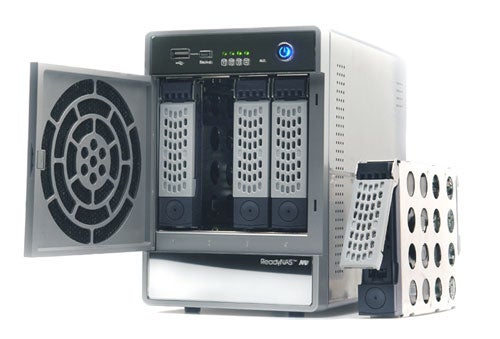 There’s more though – pressing the Backup button on the front panel automatically secures selected data on the appliance to a storage device plugged into the front USB port. Getting this to work is not so easy as Infrant merely supplied the same manual as that used for its other NAS appliances so this feature is not documented. You need to create a backup job with a folder selected as a source and the USB device as the destination. When job creation is completed you are then given an option to assign it to the backup button. In practice this worked fine although you must have the USB device defined in the job inserted before pressing the button. There is also an option to automatically copy the contents of any USB drive to a share on the appliance on device insertion.


Access controls are well above average as you can restrict access to all shares with an optional password or use local user and group membership allowing read and write access to specific shares to be determined. In Domain mode the appliance can use a designated domain controller and Active Directory Services to authenticate users. Each mode also supports a range of disk quotas which can be applied to individual users or groups and extensive alerting facilities allow emails to be sent when quotas are being reached.


The ReadyNAS NV is one of the slickest NAS appliances we’ve yet seen. Infrant has been very lazy with the documentation but apart from this if offers a remarkable range of features, security options and backup tools and does so at a very competitive price.

The Backup Button feature is a handy feature which needs to be supported better in the documentation.

The appliance offers an extremely good range of backup features and scheduling options.

It takes a while but appliance capacity can be upgraded online by swapping out the old drives with four larger ones.