There must be something in the water this week. For hot on the heels of what will likely be one of the best value TVs of 2011, Samsung’s PS51D6900, we now find ourselves spending quality time with what has a very good chance of being the biggest projector bargain of 2011: the InFocus SP8600.

InFocus’s cautious return to the UK home cinema projection market has already impressed us recently in the shape of the SP8604, which basically delivered at least the same level of performance as Vivitek’s very-similar H5080 while costing hundreds of pounds less. But with the SP8600 InFocus has come up with a model that has the potential to bring home projection to the masses and make InFocus a household name.

The bare facts about the SP8600 are almost irreconcilably impressive. So we’ll lay them out for you as clearly as possible. First, it costs just £799. Including VAT. Next, amazingly for such a cheap product, InFocus is so confident about the SP8600’s build quality that it offers with it a 5-year parts warranty, 3-year labour warranty and even a 1-year lamp warranty.

Next, despite its price it sports not only a full HD resolution from its DLP optics, but also a six-segment (as in, RYGCMB), three-speed colour wheel. And the chipset at its heart is a DarkChip 3 (DC3) affair rather than the older, less contrast-rich DC2 model we’d have expected.

This helps the SP8600 claim a very healthy (for the entry level part of the market) 5,000:1 contrast ratio despite the projector also claiming a startlingly bright 1800 Lumens of light output.

Even its lowest running noise of 26dB and maximum lamp life of 4000 hours are better than you would expect with such a cheap projector.

In keeping with most very affordable projectors nowadays, the SP8600 carries a built-in speaker so you can use the projector without needing a separate sound system. Inevitably the sound from this is pretty flimsy, and leaves you with audio that doesn’t sound connected to the pictures. But it’s still a handy backup for emergencies.

Needless to say there are a few compromises to swallow, which we’ll get to later. But the stuff we’ve covered so far already makes the SP8600 look a couple of hundred quid underpriced.

Inevitably the SP8600 isn’t a particularly gorgeous projector. But its matt black finish is sensibly restrained given the likelihood of the projector being positioned on a coffee table in front of a normal viewing position; its sculpting is reasonably cute and ‘domesticated’; and its footprint is small enough to be practical but large enough to control fan noise.

Setting the SP8600 up uncovers arguably the projector’s most aggravating – though entirely predictable for its money – compromise. For there’s no manual vertical or horizontal image shift for the lens, meaning getting the image in the right place on the screen will potentially be quite fiddly for you, and will likely involve the use of keystone correction.

We usually try to avoid using keystone systems, as essentially they digitally adjust – or maybe distort would be a more appropriate word – the picture to give it a properly rectangular shape. And if there’s one thing AV enthusiasts hate, it’s anything which digitally processes their lovely pictures.

Before anyone gets too despondent about this, though, the simple fact is that no other projector at anything like the SP8600’s price point offers vertical image shifting either. And actually, as digital keystone adjustments go, the one on the SP8600 seems pretty solid. Another slightly disappointing thing about the SP8600 that materialises during set up is its fairly measly 1.2x level of optical zoom. But again, this is entirely par for the budget projector course.

Features within the SP8600’s tidy onscreen menus are remarkably numerous for such an affordable projector. For a start, you can store three different ‘user’ picture setting profiles beyond the ‘bright’, ‘normal’ and ‘movie’ presets the projector ships with. And when it comes to fine tuning, as well as a flesh tone adjustment you can adjust the colour temperature and gamma settings, and even tweak the hue, saturation and gain values for not only the red, green and blue primary colours but also the cyan, magenta and yellow secondary colours!

The SP8600’s specifications and features have mostly considerably exceeded expectations based on its price. And happily the same deal applies with its picture performance.

Two things immediately put the SP8600 in a whole different performance world to pretty much anything else we’ve seen for similar money: it’s black level response, and its colour resolution.

In terms of black level, there’s much less of the obvious greying misting over dark areas than you usually get with super-budget projectors – especially ones that use LCD technology rather than the DLP system in the SP8600. Delivering a believable black level response is fundamental to producing a truly cinematic picture, yet it’s also the area where most budget projectors fail the most. So for the SP8600 to perform so strongly in this crucial area is a massive boon.

As for colours, they impress on two levels. First, they’re strikingly punchy and dynamic, emerging from our screen with a degree of vitality and verve that we don’t recall seeing before on such a cheap machine. To be more specific, while we’ve seen ultra-cheap LCD models that can deliver even more brightness than the SP8600, this brightness has never been joined at the SP8600’s price by anything resembling a decent contrast range. And it’s the combination of high brightness with a healthy black level response that sets the SP8600 apart and makes it a true movie machine rather than just a cheap general-purpose, multimedia-friendly machine.

It’s in this startling dynamism of the image, we suspect, that you can most see the benefit of using a DC3 chipset. Especially as the picture’s ‘pop’ is delivered while retaining much more natural colour tones than you usually get with budget projectors, which are often calibrated as much with multimedia/PC use in mind as video.

There’s lots more good stuff to report about the SP8600 too. For instance, its fine detail reproduction is superb for a budget projector, reproducing favoured Blu-rays like Casino Royale, Avatar and No Country For Old Men with a pixel-perfect degree of accuracy that would have impressed us on a projector costing three times as much. Honestly, it’s that good.

Also pretty brilliant is the SP8600‘s motion handling. Basically, even with 24p Blu-rays objects and camera pans look absolutely natural as they cross the screen, with none of the overt judder, dot crawl noise or blurring that characterises most really cheap DLP projectors.

Panning very quickly around in a console game can cause some break up over sharp edges, but this would normally be the least of your gaming picture problems with a typical ultra-cheap projector.

Finally, the projector runs pleasingly quietly in its Eco lamp mode, and for most of the time there’s much less noise in the SP8600’s pictures than we would have expected for its money. 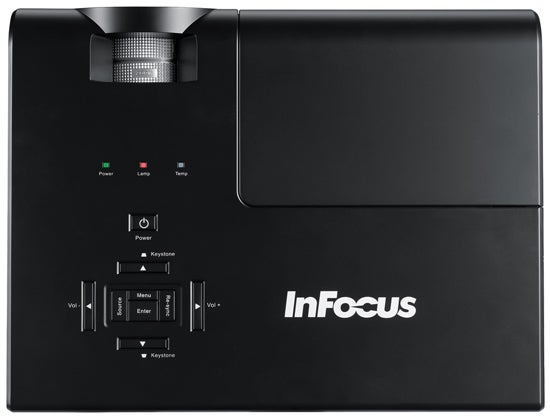 The extreme sharpness described earlier isn’t generally joined by grittiness in the picture; colours look smooth rather than fizzy, and perhaps most surprising of all, dark parts of the picture are only marginally affected by the overt green dotting noise witnessed on many cheap DLP projectors.

At which point we’re duty bound to point out a few areas where the SP8600’s budget nature is at least slightly apparent. For a start, its tiny little ‘credit card’ remote control isn’t exactly easy to use in a darkened room.

Next,  while noise is generally well controlled, occasionally there can be a slightly fizzy look to certain colour hues, predominantly those based around orange or yellow. In fact, during the casino sequences in Casino Royale this noise turned into some really quite distracting block noise over the actor’s faces.

However, this was the only time we ever saw this issue throughout our time with the SP8600, and in any case InFocus is launching a firmware fix (which adjusts the way the colour wheel works) that you can introduce to the projector yourself in the unlikely event that you experience the same problem. So in the end, our complaints about noise are so minor we’re already wishing we’d never mentioned them!

The only significant shortcomings are a slightly hollow look to very dark scenes as the projector struggles to render shadow detail, and some evidence of single-chip DLP’s so-called ‘rainbow effect’, where stripes of colour appear in your peripheral vision or over very bright parts of the picture.

You can certainly minimise the rainbowing by not running the projector in its high lamp mode, though, and sticking with the relatively low-brightness Movie preset – or a self-calibrated derivative of this mode. Even then It still crop ups from time to time, especially if you sit so close to the screen that you’re forever having to flit your eyes over it. But from a normal viewing distance it’s only a minor and occasional distraction.

Don’t be put off by the little list of negatives we finished up with back there. The bottom line with the SP8600 is that even if it cost £1100 it would be a good projector. So for the measly sum of £800 – with a 5-year parts warranty, let’s not forget – it’s little short of incredible.