A couple of years ago, InFocus projectors seemed on the cusp of world domination, with a host of hot models at crazy prices proving hard to resist. But then everything went strangely and disturbingly quiet.


Thankfully, though, the brand certainly has not become another name driven under by the now officially Very Boring Indeed recession. In fact, InFocus is not only back on the scene with the new ScreenPlay SP8602, but it’s back with a vengeance. 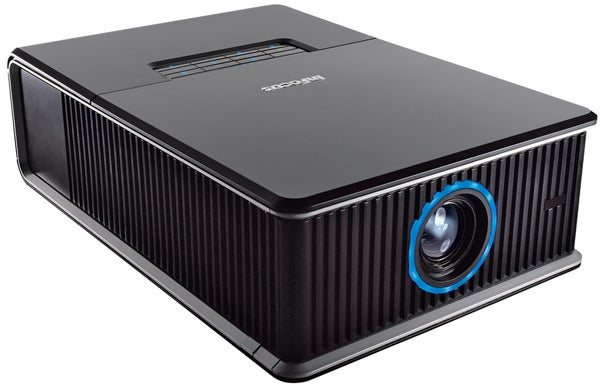 The ScreenPlay part of this DLP projector’s name is actually quite interesting, since the same name was used at an earlier stage in InFocus’s history, suggesting that the SP8602 might be a return to ‘core’ values, or something similar. But actually, this isn’t borne out at all by the projector’s design!


For InFocus has certainly never made a projector that looks remotely like the SP8602 before. It’s a true original, right from the unusual elongated matt black chassis through to the extraordinarily bright glowing ring around the lens and the fact that you can alter the appearance of the projector’s top by swapping between a selection of slide-on ‘skins’. 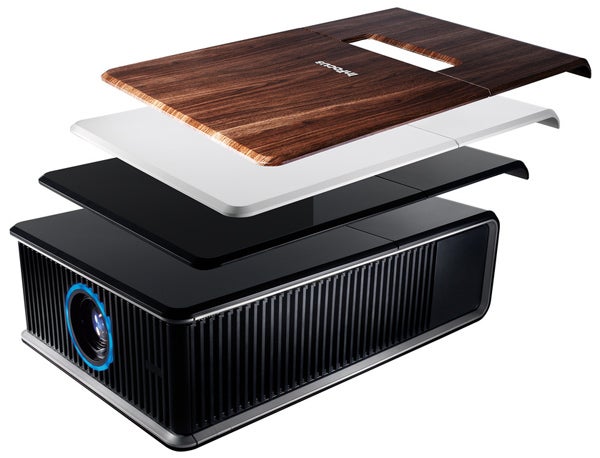 Designed to replace the matt black standard finish, these optional skins come in gloss black, white and a walnut wood effect, with one further option being a skin on which you can paint your own colour or design. Not that this latter choice sounds like a particularly attractive option to someone who obtained a score of 28 per cent in the last art exam he took…


As a little side note on the design, we were rather entertained to discover that InFocus has designed the remote control to be a ‘mini-me’ version of the projector chassis. This little indulgence hasn’t led to the remote becoming either impractical or unwieldy, though. In fact, it’s one of the more straightforward remotes we’ve come across – especially as it features a nice, bright backlight. 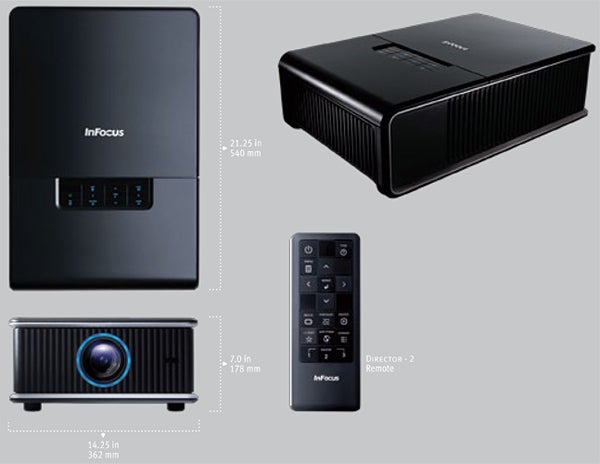 While the various design elements mentioned above certainly give the SP8602 a striking and characterful appearance, though, one of them doesn’t actually seem like a very good idea. For as soon as we started using the SP8602, it became apparent that the remarkably bright blue ring it sports around the lens was actually causing a bluish light to reach and bounce off our projection screen, negatively affecting the colour tone of the picture. You won’t be too surprised to learn, then, that this thankfully optional light remained well and truly off during our tests!

Setting the SP8602 up is a rather hit and miss affair. For while the projector helpfully carries vertical and horizontal optical image shifting, the amount of physical vertical shifting available is limited, which could present a problem for people wanting to table/shelf-mount the projector at the rear of a room. Ceiling mounters, though, should be fine. We should add, too, that there is further digital image shifting, though many readers will probably prefer not to use this.


The vertical and horizontal image shifting wheels are rather imprecise mechanically, too, but stick with them, and you should eventually manage to slide the image into exactly the right position. 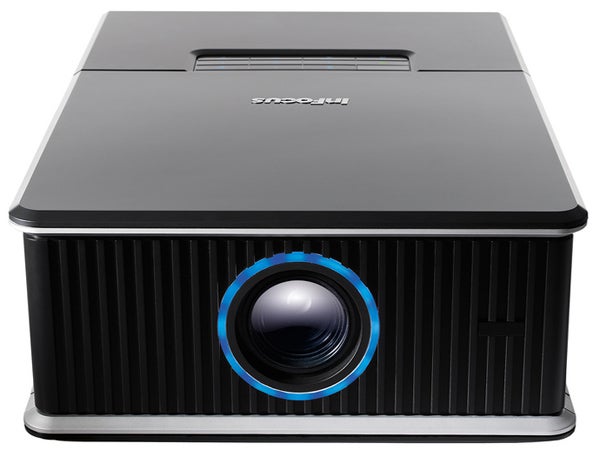 One final limitation of the SP8602’s set-up options is that its optical zoom only runs to 1.5x. This doesn’t rival the 2x or so offered by some of its rivals. InFocus has provided a digital zoom option to provide more flexibility regarding throw distance options, but such digital zooms always have the potential to reduce the quality of the picture, so we wouldn’t recommend that you use them.

As we start to explore the SP8602’s onscreen menus, it’s good to note that the projector has been endorsed by the Imaging Science Foundation (ISF). This immediately alerts us to the fact that it’s got enough set-up flexibility to satisfy the considerable requirements of one of the ISF’s engineers.


Particularly pleasing to find is a colour management tool that permits you to tweak the gain and offset adjustments for the red, green and blue colour elements. But we also got calibration mileage out of a selection of gamma presets and, in particular, a very useful system allowing you to set the iris to any of 10 different settings. 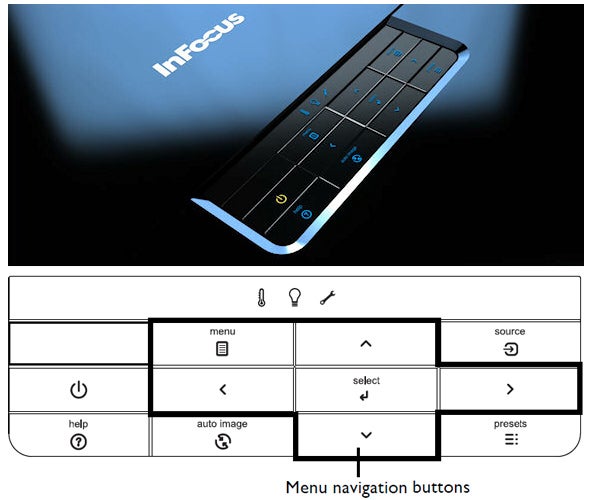 There’s an extra Auto iris mode too, though this is rather spoiled by the racket the iris makes as it continually adjusts itself in response to the image content.


For the record, we found the best results in terms of contrast in our blacked out room came from setting the projector’s lamp output to low, and the iris to around its halfway point.


So far, the SP8602 has created slightly mixed feelings. But thankfully, where it really matters – picture quality – the projector puts us in an overwhelmingly positive frame of mind.

Particularly startling right away is just how much detail and crispness there is present in the projector’s handling of good HD sources. Even better, although the SP8602 seems to leave no pixel unturned in its quest for maximum HD impact, it also takes care not to overcook the sharpness to the point where the image starts to look unduly gritty or noisy.


It does no harm to the image’s clarity, either, that the SP8602’s handling of motion is impressive for its price point. It carries a Motion Smoothing tool that does a really effective job of reducing judder provided you don’t set it too high, leaving images looking fluid without generating too many processing side effects. But in any case, the projector’s motion looks perfectly decent without the Motion Smoothing feature in play at all.


At first, colours weren’t one of the things that most stood out to us about the SP8602’s pictures, since at first glance they don’t appear quite as aggressive or vivid as we’ve seen them on one or two rivals. However, once we focussed in on them, it quickly became apparent that they actually contribute hugely to the overall picture quality on account of their terrific subtlety. In other words, they combine accurate, stripe-free colour blends with a natural, authentic tonal range that’s among the most expressive we’ve seen on a sub-£5K projector. 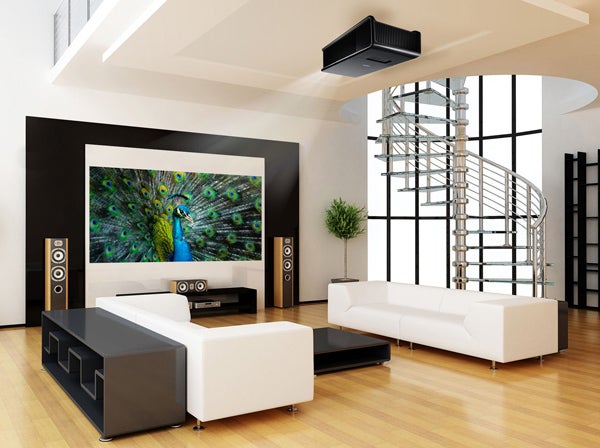 We were relieved, too, to note that for the vast majority of the time, the only colours we were seeing were the colours we were supposed to be seeing, since the SP8602 suffers very little with the single-chip DLP’s so-called ‘rainbow effect’. For those of you not familiar with this, it’s a phenomenon whereby the single-chip DLP colour wheel system can cause stripes of pure red, green and blue to flit around your peripheral vision or over particularly bright image elements.


Wrapping up an excellent picture effort is the SP8602’s black level response. For provided you don’t push the brightness too hard (we refer you back to the lamp and iris settings mentioned earlier), the SP8602 can be calibrated relatively simply to deliver a superb balance between rich, deep black colours and the sort of shadow detail information necessary to give dark scenes a sense of depth equivalent to that on show during bright scenes.


There are a couple of operational niggles to report before we wrap up, namely that the projector runs slightly louder than we’d like, and that it takes longer than usual to switch between standard def and high def HDMI signals if, say, you’re flitting around different resolution channels on a Sky HD receiver set to its ‘auto’ output resolution mode.


Despite its occasional set-up and operational niggles, though, the SP8602 remains a very impressive return indeed to the projector fray for what was once one of our favourite projection brands.


Once you’ve worked round some slight set-up limitations, the SP8602 will reward your perseverance with a truly stellar picture performance well worth the £3,000 asking price. Here’s hoping, then, that InFocus doesn’t take another two years to get its next projector out!