When I’m watching a film, I like dark parts of the picture to really look black. I make no apologies for this, or for the fact that it’s often a decisive element in my reviews, for I genuinely believe black level response to be one of the most important elements in creating a truly convincing home cinema picture.


Which explains why I’m so excited today to be sat alongside the InFocus IN83. For tucked away inside this projector’s surprisingly living room-friendly body beats a heart of black gold, AKA the Full HD Texas Instruments DarkChip 4 DLP chipset.


The IN83 is the first DarkChip 4 projector we’ve seen, and as you can probably guess from my earlier babbling, its main claim to fame over its DarkChip 3 predecessor (DC3 being the chipset used in the already impressive InFocus IN82 projector) is an improved black level response. 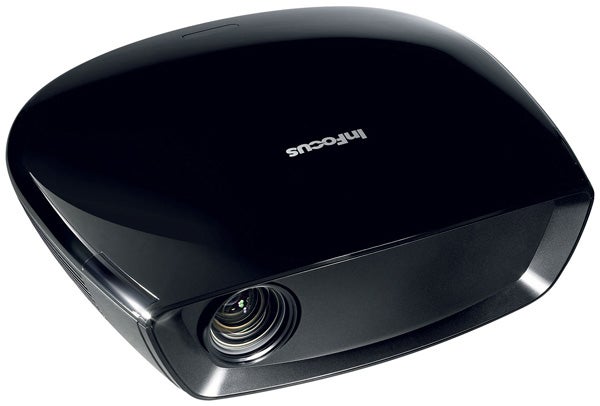 
Given how stunning the IN82’s black level response was, I can’t wait to find out what approximately 25% more contrast looks like. Especially since any extra black level punch in the IN83 is going to be enhanced by the fact that it’s also a notch brighter than the IN82, serving up a typical light output of 1,400 ANSI Lumens (1,600 Max) against the IN82’s 1,200 (1,400 Max).


To prove I have the patience of a saint, however, I’ll temporarily forego what I hope will turn out to be a really fun reviewing experience in order to fill you in on some more of the IN83’s background.


The first thing to note is that aside from the factors we’ve already covered, plus the fact that the IN83 can deliver SMPTE brightness on images up to 15.2ft across versus the IN82’s 14.75ft, the IN83 appears to be identical to the IN82.


This includes its looks, which find the DC4 system lying within a boldly designed host employing a polished black finish, rounded corners and some cutesy angles to delightful effect.


The connections on this sultry-looking number are up to snuff, too, including two v1.3 HDMIs (one via an M1-DA port and supplied adaptor), two 12v outputs for triggering electrical screen and aspect ratio devices, plus RS232, IR repeater and Niles/Xantech compatible 3.5mm mini jacks for helping to integrate the IN83 into a fully fledged home cinema installation.

The first sign of any trouble with the IN83 comes as I try to set it up. For starters, the projector is mounted on an unusual foot arrangement that enables you to swivel it left and right or tilt it up and down. This sounds great in principle, and there was a time when this system’s sheer novelty had me firmly on its side. However, I have to say that I got really frustrated by how hard it is to make small adjustments, especially when tilting the image up or down.


My other complaint is the limited amount of optical zoom; just 1.2x. This could make it tough to accommodate in some living or home cinema rooms (I’d recommend you check out InFocus’ interactive image size calculator).

On the plus side, you do get digital vertical image shifting, which could save the day if you the tilting mechanism drives you crazy. Plus there’s keystone correction to help get images perpendicular if the IN83 is sited above or below the centre of your screen.


It’s also worth pointing out that the IN83 carries the facility to store day and night settings calibrated by an Imaging Science Foundation professional, should you want to pay such a professional to optimise the projector for your particular viewing environment. There’s a huge amount of colour flexibility at your disposal, too, courtesy of InFocus’s Colour Gamut Calibrator.


As you’d expect of such a sophisticated projector, the IN83 is calibrated to deliver the video-friendly D65K colour standard right out of the box, and sports some pretty high-spec video processing: namely the same Pixelworks DNX 10-bit system that’s worked so well on many previous InFocus projectors. 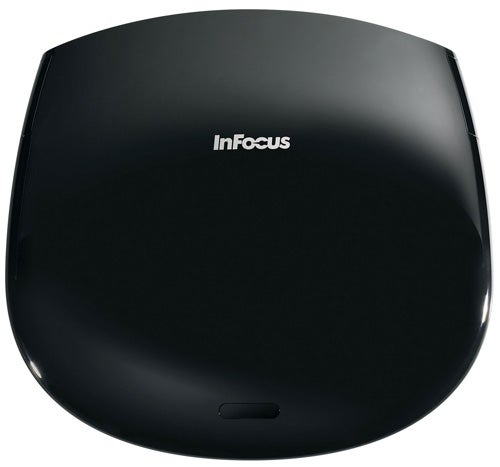 Finally in the processing department is the software implementation of Texas Instruments’ BrilliantColour technology, designed to improve colour saturations and tones.


So now, at last, I’m free to discover if the arrival of DarkChip 4 can really be seen in the IN83’s picture performance.


And the simple answer to that is yes, it can; resulting in the IN83 delivering the single best picture quality I’ve seen on a DLP projector in the £4k or less price bracket. In fact, the IN83 could have cost a grand more and I’d still have loved it.


Obviously, we should start our assessment of the IN83’s video credentials with its black level performance. As hoped, the depth of the blacks on show during a run-through of – appropriately enough – ”Men In Black” on Blu-ray is nothing short of awesome.


As the bug flies through the night sky during the opening credits, for instance, the night-time backdrop looks blacker than I’ve ever seen it on any projector other than JVC’s recent HD1 and HD100 models, with their D-ILA technology. In other words, with a little judicious tweaking of its iris settings (levels 55-64 worked for me) the IN83 delivers the deepest black levels I’ve seen on a DLP projector – or at least on a DLP projector with any kind of remotely affordable price tag attached.

Crucially, though, the IN83’s black levels aren’t just deep. They’re also incredibly natural, which is to say they contain huge amounts of shadow detail (a happy side effect too, no doubt, of the image’s extreme brightness), and look totally believable in tone.


Also very believable in tone is the entire – vast – spectrum of the projector’s colour palette. In fact, the IN83’s colours are so believable that the curiously coloured aliens in ”Men In Black” actually look as credible as the humans!


With ostensibly the same processing engine and setting arrangements as the IN82, I can only assume that the marginal extra naturalism of the IN83’s colours is down to the IN83’s combination of enhanced black level and a tad more brightness.


More IN83 goodness concerns the lack of noise in its pictures. There’s no trace of either the motion blur or motion dithering artefacts once common to DLP technology, and dark areas also remain largely free of any green or grey dot noise. 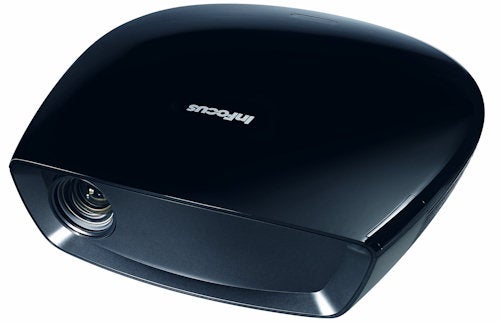 This lack of noise allows you to fully appreciate the immense amount of fine detail in the IN83’s pictures. Every last pixel of the excellent ”Men In Black” Blu-ray transfer is immaculately rendered without a trace of noise, building yet further on the terrific sense of image depth and purity already developed so successfully by the DC4 black level response.


One last significant plus concerns the IN83’s handling of standard definition, which is shown with impressive definition and surprisingly little nasty scaling or source noise.


However, even a projector as dazzling as the IN83 doesn’t come without its faults. For starters, I wasn’t impressed by the BrilliantColor feature at all. Activating this does make colours look more vivid, but it also has a nasty habit of making the projector emphasise noise in the picture, be it grain in an HD source or MPEG noise in a standard definition one.


Another issue you may have to work round is the projector’s operating noise volume. Its fan and colour wheel can be quite intrusive during quiet scenes if you’ve got the projector sat anywhere near your viewing position, so I’d suggest you try and place it as far behind you as possible, or try and get it boxed into a piece of sound-dampening furniture.


Finally, even its use of a seven-segment colour wheel can’t completely free the IN83 from DLP’s rainbow effect, where stripes of red, green and blue flash over particularly bright picture elements, such as ”Men In Black’s” opening white-on-black credits. But before you get too alarmed by this, the flashes of rainbowing are not only rare, but also so short-lived as to be almost subliminal.


The IN83 ensures that the new DarkChip 4 system not only lives up to our sky-high expectations, but that it does so at a far lower price than we’d ever have thought possible 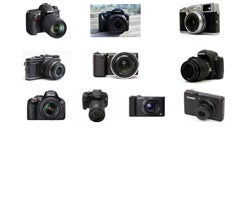