InFocus really took the quality end of the affordable HD Ready projector market by storm with its highly rated IN78 and IN76 DLP offerings. And now it’s got its sights firmly set on the affordable full HD market too, with the £3,000 IN82.


Happily this 1,920 x 1,080 device adopts the same sort of styling as InFocus’s lower-end models. And so you get a glossy black finish wrapped around a very curvaceous body, with the main unit set upon a rotating, tilting ball joint to aid you in getting a picture from the projector onto your screen no matter how awkward your living room shape. The only difference between the IN82 and the IN76/78 aesthetically is that the IN82 is substantially bigger.


If we had any issue with the IN82’s design it would be that the ball joint we mentioned can be a bit fiddly to use, since it’s difficult to get the projector to tilt in small increments. But you always end up with your desired result in the end. 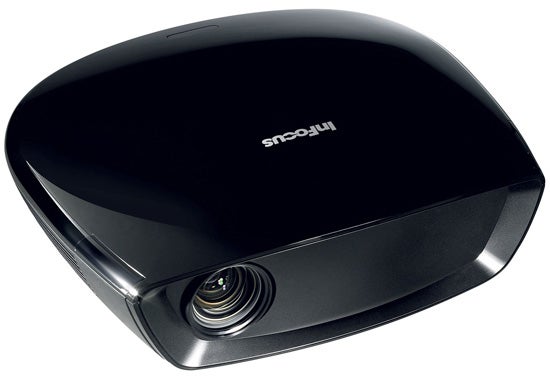 The IN82’s rear end plays host to a pair of digital video sockets for HD use, both of which are built to the v1.3 standard permitting compatibility with the much-vaunted but ne’er seen Deep Colour format. Whether any Deep Colour sources will ever appear is anyone’s guess, but we guess it’s still nice to have a projector that’s ready for them if they do.


You may have noticed that we didn’t just say ‘pair of HDMIs’ in the previous paragraph. This is because only one of the IN82’s digital video inputs is actually an HDMI; the other is an M1-DA type able to take pretty much any input, analogue or digital (including HDMI) via a suitable adaptor.


Other handy connections include two 12V triggers (one for driving an electronic screen, the other for adjusting screen aspect ratios), an RS232 port for system integration, and a component video input.


Setting the IN82 up is straightforward thanks to that ball joint and some sensibly organised onscreen menus. But you can also go pretty much as in-depth as you like, thanks to the inclusion of everything an Imaging Science Foundation (ISF) engineer would need to professionally calibrate the projector to suit the demands of your room and screen type.

Before we give in to the growing temptation to just settle down in front of a few movies with the IN82, we’re happy to report that it really is a fearsomely well-specified beast for a £3,000 full-HD DLP projector. Obviously that full-HD resolution is itself a big story, but it’s also backed up by 1080p/24fps compatibility, and a very high claimed contrast ratio of 12,000:1, delivered from a Texas Instruments DarkChip 3 chipset. You also get built-in DNX 10-bit video processing from PixelWorks – a system that’s delivered some strikingly good results in the past.


The DLP colour wheel inside the IN82, meanwhile, is a seven-segment affair utilising a proprietary auto-calibrating system, and so should hopefully throw up precious little evidence of DLP’s common ‘rainbow effect’ and motion noise problems.

With an extremely bright 1,500 ANSI Lumens of lamp output available too, the IN82 reads on paper like a projector in the £5k plus rather than £3k price bracket.


A couple of these uniformly impressive specifications do need a little qualification, though. First, the Brilliant Colour system is only the software implementation; the IN82 doesn’t go the whole Brilliant Colour hog and also provide an RGBYMC colour wheel.


Second, the 12,000:1 contrast ratio figure isn’t a totally ‘native’ one, since you only achieve the best figure if you also ramp down the projector’s brightness using the 12 different lamp output settings provided. The idea is that people with completely blacked out rooms can sacrifice a little brightness for contrast while people with ambient light in their rooms will need to retain more brightness.


The upshot of this system obviously means you can’t enjoy the IN82’s deepest black levels and highest brightness output simultaneously. But this ‘trading off’ practice is common in the projection world, and is generally considered a good thing except for where automatic contrast adjustment projectors change brightness levels too aggressively. This potential flaw will not trouble the IN82, though, since you can only select the IN82’s iris setting manually.


In fact, so far as we could tell during our very enjoyable time with the IN82, it suffers from remarkably few flaws of any kind.

Probably its single strongest suit versus similarly priced opposition is its black level response. This can be seen, for instance, in the almost complete lack of greyness evident during the dark scene at the start of the HD DVD of ”The Prestige”, where Borden witnesses Angier drowning beneath the main stage.


Even more impressive is the seeming effortlessness with which the IN82 achieves its exemplary black levels. In other words, rather than looking slightly empty and unnatural as they can on some rival projectors, even the darkest corners of the picture are portrayed with enough shadow detailing to ensure that they appear to have the same sort of depth as the rest of the image. This, inevitably, makes them feel totally organic to the image as a whole.


One of the key reasons behind the IN82’s retention of shadow detail in dark areas is simply the fact that you don’t actually have to sacrifice anywhere near as much brightness to achieve a sterling black level response as you do with many rival projectors – especially those using LCD rather than DLP technology. 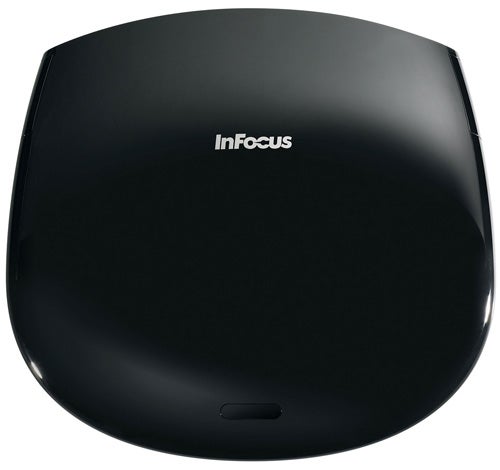 This same high brightness/high contrast combination also helps the picture look remarkably punchy and dynamic for its price, and contributes in no small measure to the IN82’s terrific colour reproduction.


Colours actually impress on two different fronts. The first thing that hits you is how richly saturated colours are across the board. The sensationally detailed, opulent sets of ”The Prestige” are thus delivered with a vitality and solidity that is rare indeed on anything other than megabucks projectors.


The other key colour point is how natural tones look. ”The Prestige” makes extensive use of fairly dark, natural lighting of the sort guaranteed to highlight any colour tone deficiencies a projector might have. But for 95% of the time, the film’s palette looks totally convincing on the IN82. And even the 5% that’s not quite spot on is only off-key by the slenderest of margins.


It should be added here that the colour situation we’re describing is that found after we’d spent quite a bit of time carefully calibrating the image using every set-up aid we could lay our hands on. In other words, while we probably could get rid of the odd rogue tone with some careful manipulation of the colour presets, doing this would mess up too many other things for comfort.

The next bit of good news about the IN82 concerns its sharpness. Provided you use its pixel for pixel mode, every last drop of detail is wrought from ”The Prestige’s” immaculate HD transfer, breathing new life and intensity into the film’s turn-of-the-19th-century setting. Even better, the acute sharpness is achieved without the sort of grain or dotting noise that lesser projectors suffer when trying to look sharp with HD.


Actually, the IN82 is rarely troubled by noise of any sort, including those twin DLP problems of the rainbow effect and fizzing noise over horizontal motion. Even its standard definition pictures look smoother and more engaging than usual, thanks in no small part to the superb scaling efforts of the PixelWorks image processing system.


The only even remotely serious problem we found with the IN82 is its running noise. It generally puts out around 30-33dB during average use conditions, which is enough to be audible during anything other than action scenes if the projector happens to be situated somewhere near your seating point.

Still, even if you can’t manage to position the projector away from your seats, it has to be said that the noise is very regular and therefore quickly fades into the background rather than being a constant distractant.


A far smaller problem finds MPEG noise in (very) weak standard definition broadcasts being slightly exaggerated. Otherwise, the only other thing we can say harks back to the IN82’s extensive picture setting flexibility, for it is possible to mess pictures up quite badly if you’re not careful with some of the settings on offer. But that’s hardly the projector’s fault, is it?!


Even the HD Ready glories of the previously tested InFocus IN76 and IN78 models scarcely prepared us for the stellar achievement of the company’s first full HD offering. We guess you can better the IN82 if money’s really no object at all – by spending, say, at least double its £3k asking price. But for its price point it’s far and away the best projector we’ve seen to date.