To survive in the UK projection market as long as InFocus has, you’ve got to be doing something right. Actually the InFocus formula for success is blindingly simple: just make really good products that you then sell for remarkably affordable prices. Hardly rocket science, is it?!


But with times getting ever more competitive, with its latest projector, the IN78 – launched under a new ‘Play Big’ sub-brand – InFocus has been forced to produce what looks like its biggest bargain yet: a projector which uses Texas Instruments’ acclaimed DarkChip 3 DLP technology while only costing £1,475.

To be fair, this is not quite as cheap as the DarkChip 3 Optoma HD73 we tested a couple months back. But it hugely undercuts the current DarkChip 3 offerings from rival brands like Sim2 and ProjectionDesign. And in any case, the HD73 wasn’t really all that much cop, so if the IN78 can out-perform it enough to justify the extra £100 or so, it’ll be laughing.


The first thing you’ll notice about the IN78, after its price ticket, will be its extravagant looks. It sports a beautifully curvaceous design strikingly clad in a high-gloss black finish, with the whole lot then positioned atop a ball-jointed ‘foot’. The idea behind this is that it allows you to swivel and tilt the projector to your heart’s content when trying to get its pictures perfectly positioned on your screen.


Not surprisingly this makes the IN78 more flexible than most rivals when it comes to adapting it to work in a living room environment, especially as it also features keystone and vertical image shift adjustments. In an ideal world the joint mechanism would be a little less stiff, so that you could make smaller adjustments more easily. But although it might take a bit of toing and froing, you can always get it set right in the end. 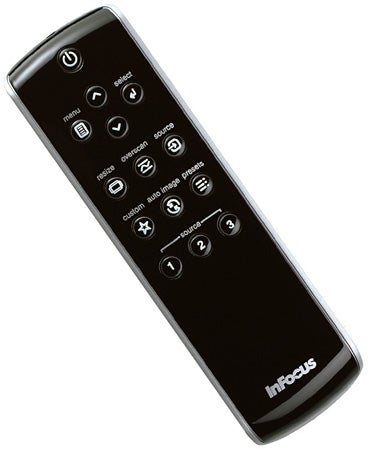 It’s also during the setup stages that you note a couple of other big attractions of the IN78. First, the remote control supplied with it is unusually friendly by projector standards, featuring a helpful backlight so that you can use it in the dark, and a sensible button layout.


Second, the projector’s connectivity is really impressive for its money, in that there are not one but two digital video inputs: a standard HDMI, and an ‘M1-DA’ multi-format affair that can, via the right adaptor, work with all manner of connection types and standards – including HDMI, DVI, component video and analogue PC video. An HDMI to M1-DA adaptor is included. People with or thinking of getting a motorised screen, meanwhile, will also appreciate the IN78’s 12V trigger output, designed to automatically trigger the attached screen to roll down.

Another thing we really like about the IN78 before we even get near to testing it is the way it seems to want to be all things to all men. For while, as we’ve seen, it goes out of its way to be as easy to set up as humanly possible for the casual domestic user, it also carries the facility to be professionally calibrated for a serious AV install by a representative of the Imaging Science Foundation. Such premium functionality is pretty much unheard of at this price level.


To understand what sort of performance level we might expect from the IN78, it’s worth dwelling for a moment on why Texas Instruments’ DarkChip 3 chipset is better than the DC2 version employed by most projectors costing under two grand. 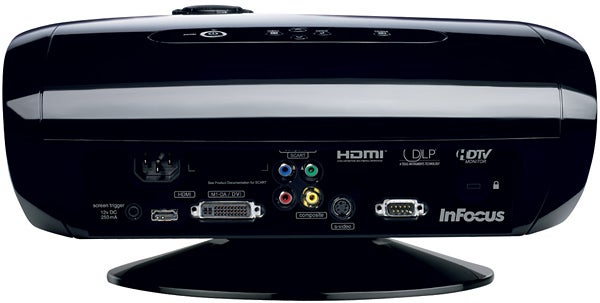 Essentially there are two benefits: better black levels/contrast due to more efficient construction of the ‘Digital Mirror Device’ (DMD) at DLP’s heart, and crisper motion handling thanks to the fact that the DMD’s tiny mirrors respond to changes in picture information slightly faster.


Thanks to the black level boost from DC3, the IN78 is able to claim a contrast ratio of 3,500:1 – a very respectable figure indeed by DLP standards. Admittedly it looks a bit low against the 6,000:1 and more quoted by some similarly priced LCD projectors. But it’s important to realise that the IN78’s figure is more ‘real world’ than the contrast numbers given with LCD projectors, since unlike DLP, LCD projectors can generally only achieve decent black levels by reducing their brightness output. 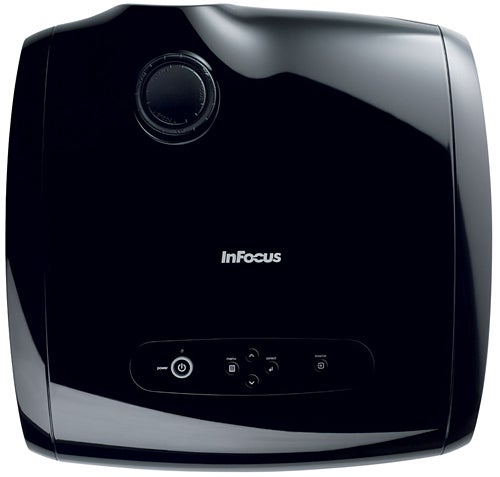 One final feature of the IN78 that should certainly have a part to play in its picture quality is its use of Pixelworks’ DNX 10-bit processing. As well as being one of the more sophisticated processors on the market when it comes to remapping, say, standard definition sources to the IN78’s 1,280 x 720 native resolution, DNX also allows the projector to take in the 1080p HD format now becoming important with the launch of HD disc players.


So far the IN78 hasn’t really put a foot wrong. And this trend happily continues with its picture performance, which is quite ridiculously good for such an affordable projector. The best way to sum up the IN78’s picture appeal is to describe the images it produces as ‘profoundly cinematic’ – but we guess you’re going to want us to put a little more meat into the review than that, right?!

The main picture quality assault comes on two fronts: black levels and what we’ll call ‘purity’, for want of a better description.


The black level angle is self-explanatory, simply referring to the unusually profound depths the IN78 manages to plumb while reproducing dark shots and scenes, such as those in the Nostromo’s escape pod at the end of Alien. Most other projectors at this level – including the Optoma HD73 – exhibit far more greyness over black areas than the IN78, and as a result fail to deliver a picture with as much scale and immersive impact.


In terms of purity, we’re talking about the IN78’s uncanny knack with suppressing practically every type of video noise. These noise types start with those traditional DLP nemeses of the ‘rainbow effect’ (where stripes of raw red, green and blue colour flit around the periphery of your vision) and fizzing noise over horizontal motion, especially if that motion involves skin tones. But we’re also talking about general stuff like grain, dot crawl, and colour shimmer around edges.

By suffering so little with any of the above problems, the IN78’s pictures allow you to form a direct bond with what you’re watching to an extent that’s seldom possible without spending megabucks.


Other contributions to the IN78’s terrific pictures come from its vivid but unusually authentic colour palette, and a superbly judged presentation of HD detailing which ensures images always look sharp without going to such an extreme that pictures break down into looking forced, gritty and uncinematic, as can happen with less thoughtful projectors. It’s worth adding, too, that the Pixelworks processing system earns its corn with standard definition sources, which are mapped to the HD Ready pixel count with rare aplomb.


Inevitably the IN78 does leave one or two reasons to consider spending more on a higher level projector. For instance, it runs a little more noisily than we’d ideally like. Also, although moving objects are largely free of DLP’s dithering noise, they do still lose some resolution versus higher-spec projectors. Finally, you can of course get even better black levels if you splash more cash, particularly when it comes to the amount of shadow detailing retained in dark parts of the image.


Although we finished the main review on a negative note, we really can’t stress enough just what great value the IN78 is. You’d probably have to spend not far off double its £1,475 asking price to get something substantially better, while in its own price bracket it’s more or less in a class of its own.