Everybody is so focussed on the flat TV world and its crazy price wars that another, possibly even more cut-throat war seems to be going largely ignored – even though that other war is arguably of greater interest to the really dedicated home cinephile.


We’re talking about the world of home cinema projection, where the rate of price erosion is such that we’re looking today at a really excellent DLP projector selling for under a grand. Strewth! With the InFocus IN76 able to project images more than 200in across, suddenly that puny 50in TV doesn’t seem such great value at £1,500, does it?!


You get a good feeling about the IN76 as soon as you clap eyes on it. For with its vaguely circular shape, high-gloss black finish and reasonably small footprint, it looks as classy as it does domesticated.

It’s got better connectivity than you’ve any right to expect for its money, too. For as well as a standard HDMI socket, there’s also an ‘M1-DA’ socket able to take HDMI or DVI feeds – as well as PC inputs and pretty much any analogue format you can think of – via a suitable adaptor. Plus there are dedicated component video and PC jacks, a 12V trigger output for automatically starting a connected electronic screen, and even an RS-232 control port to aid system integration.


Turning our sights on the IN76’s innards, we find a DarkChip 2 DLP chipset from Texas Instruments, producing a native resolution of 1,280 x 720 and a claimed contrast ratio of 3,000:1 – actually a very high figure for a DC2 system. Admittedly the DC2 system lacks contrast and delivers a worse response time versus the newer DarkChip 3 system now carried in some projectors, but there’s no way in hell you’re going to find a DC3 projector as cheap as the IN76. For now, at least…


The projector also boasts the same Pixelworks DNX 10-bit image processing engine found on the more expensive IN78 we reviewed a while back, which means it has the ability to take in and handle 1080p inputs – something precious few current sub-£1k projectors can also claim. Furthermore, the projector’s claimed brightness of 1000ANSI Lumens is also higher than you might expect of a sub-£1k projector, enabling it to work in a bigger room than many of its peers.

It can work more easily in a weird-shaped room than many rivals too, thanks to a combination of some impressive keystone adjustment flexibility (for correcting the image’s edges so that they don’t appear at an angle), and its positioning on an innovative ball and socket foot system that allows you to tilt and turn the main projector to almost any angle you choose.


Further set up options in the projector’s menu screens are extensive and genuinely helpful. For instance, while the projector actually ships with the 65k colour temperature factory calibrated to deliver the best colour tone results, you can also adjust the colour tone yourself to an almost infinite degree.


The onscreen menus also offer, among other things, a series of gamma presets, skin tone correction, noise reduction routines, and a white peaking adjustment. Just as well, then, that InFocus has thoughtfully given you three user presets to store your preferred settings in the IN76’s internal memory. 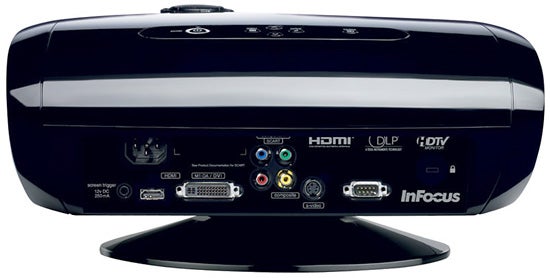 Don’t think, though, that all these features mean that this projector is complicated to use. In fact, the combination of its simple but effective (and backlit) remote and sensible onscreen menus structure means you’ll have it running in under five minutes, and should never find day-to-day use a chore.


So far we’ve found precious little about the IN76 that might hint at why exactly it’s available so cheaply. And we’re mighty chuffed to report that this experience continues with its picture performance, as it easily outperforms the usual budget standards in almost every department.


If we had to choose one aspect of its pictures that particularly stands out from the budget crowd, it would be their almost complete freedom from noise. Common DLP artefacts such as fizzing in dark areas and dot crawl over horizontal motion are almost completely absent, as are more general types of noise like grain and colour fuzzing.


On a similar note, although it’s not completely absent, we are also impressed by how little the IN76 suffers with DLP’s rainbow effect, whereby you can see stripes of bright colour flitting around in your peripheral vision or over particularly bright image elements.

Another terrific strength of the IN76 is its black level response. If anything, that 3,000:1 quoted contrast ratio seems pessimistic, as the IN76 effortlessly delivers levels of pure, cinematic blackness while exploring the darkest corners of the Xbox 360’s Bioshock that simply have no right belonging on such a cheap machine. There’s even a fair level of shadow detail to be seen in dark areas, rather than the hollow appearance we’d usually expect to find for this money.


Black levels as good as these generally go hand-in-hand with some pretty tasty colour extension and here, again, the projector doesn’t let us down. The richness of saturations on show while watching all the computer-generated finery of Star Wars: The Revenge of the Sith, especially on lava planet Mustafa, truly outshines anything else at this price level, at least in the DLP arena. And as for tones, these are generally natural and engaging.

Wrapping up a pretty much flawless picture effort is the IN76’s impressive flair for fine details. It presents in abundance all the gorgeous texturing and detailing of the Casino Royale Blu-ray disc without over-stressing them to the point where the picture starts to look bitty, as can happen with less astute projectors.


After all our enthusiastic words it’s probably worth pointing out that while amazing for its price, the IN76 can certainly be bettered in every department by much more expensive projectors. InFocus’s own IN78, for instance, produces even better black levels and richer colours, but it will set you back an extra £400-£500.


But this is, of course, no more than you’d expect. All that really matters about the IN76 is that it doesn’t just outperform every rival in its own price bracket; it completely outclasses them.