This multi-tasking laundry appliance from Indesit boasts a 7kg wash load capacity and 5kg for drying, with a direct Wash to Dry feature for suitable loads. It boasts a 1,400 spin speed, an A rating for energy, washing and spin efficiency, and a 30-degree quick wash for small loads in just 30 minutes.

Part of Indesit’s Innex series of machines that offer a single-button push for the hero feature, the XWDE 751480X promises to take a standard load of up to 5kg from dirty to dry using nothing but a big orange button. It washes and dries well, but its 7kg/5kg load capacity transpires to be rather optimistic. 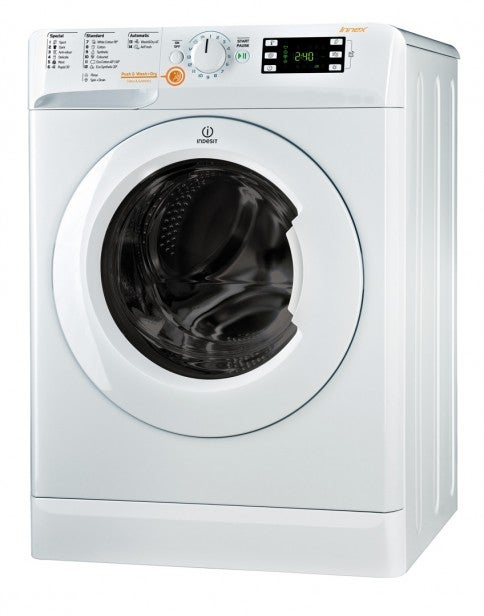 Unless you’re very seriously colour blind, Indesit’s big orange Innex button and accompanying legend that can be read from the next county draw the eye on the fascia. “Push & Wash+Dry” highlights the main thrust of the XWDE 751480X’s abilities and it packs in quite a few other niceties too.

The large central knob is easy to turn and marry up with the programmes listed on the drawer front. The LCD panel is verdant in its crisp green lettering and graphics symbols. Six buttons on the display allow adjustment of temperature and max spin speed, as well as selecting a delay start, drying-only time button and a handful of wash options.

The controls are all relatively straightforward, but why the Standard programs start at number 7, with the key everyday Eco Cotton programme down in the number 11 slot, is a bit of a mystery. Get used to these quirks. Washing is simply a matter of loading, selecting s settings and pressing the Start button – which offers up a neat bright green illumination to let you know the wash is underway. 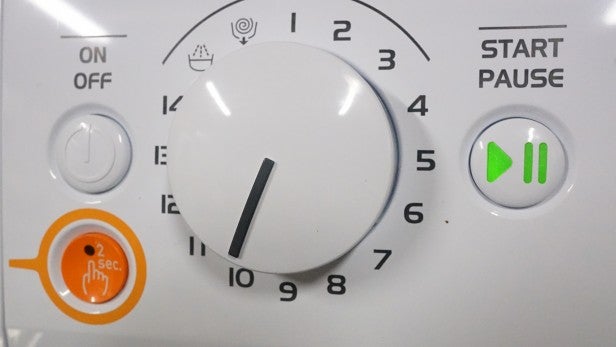 Down at drum level, things are somewhat more compact. The porthole door is no more than average size in diameter, so those wishing to wash duvets or puffer jackets must employ vigorous stuffing methods to get them in. Yet the real problem is on the inside. The drum is quite shallow back to front, so overall capacity is more limited by the sheer volume of your wash load than its weight.

While we don’t doubt this Indesit will happily wash a 7kg dry load, you simply won’t get 7kg of screwed up cotton clothes in the drum. We aimed for our typical 80% test load (5.6kg) of mixed shirts, towels and bed linen. An 80% load is fairly tight in any machine but even folding up the bed linen, it simply wasn’t going to fit without further compressing the load when we shut the door. We called a halt at 4.5kg.

Similarly, 5kg for drying is rather ambitious. That doesn’t leave a lot of room for tumbling action as the clothes dry. Tightly packed clothes will dry, but with much creasing.

Our only other operational gripes are a flimsy-feeling soap drawer and a rather poorly shaped door-seal rubber. This pools water along the front edge. I can guarantee that you’ll drag your nicely dry clothes through that when you remove them from the appliance. 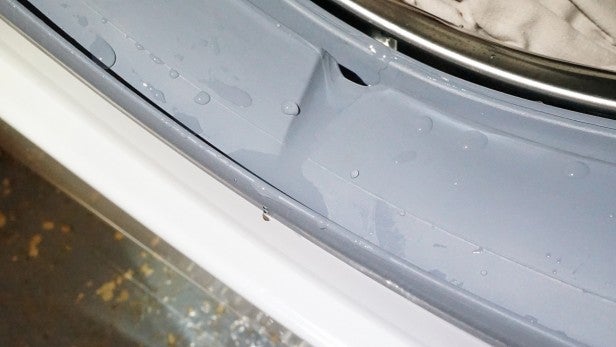 The good book – well, the EU Energy label – tells us that the 751480X will emit around 54dB when washing, 59dB drying and 80dB on maximum spin. The reality, for the most part, is a lot quieter than that – albeit with some issues on how annoying the noise is.

During the wash cycle there are occasional peaks to 54dB, but the average noise output was much closer to 50dB. This is pretty good for the usually noisier washer-dryer breed of appliance.

The maximum spin was even more impressive, at just 70dB on a maximum 1,400 spin. While not in the super-league of silent machines, you could easily hold a conversation in the kitchen when it’s going at full speed.

The drying noise could have been really good – some 10dB better than the energy label rating, in fact. Yet alongside the quiet burble of drying noise at around 50dB, every minute or so the pump kicks in to drain out the water, running at 58/59dB.

While that isn’t exactly deafening, it isn’t what I’d describe as an easy-on-the-ear noise; it’s quite aggravating. Our machine decided to have a quick spin cycle during the drying phase, presumably to agitate the washing, with noise peaking up at 70dB. Strange. 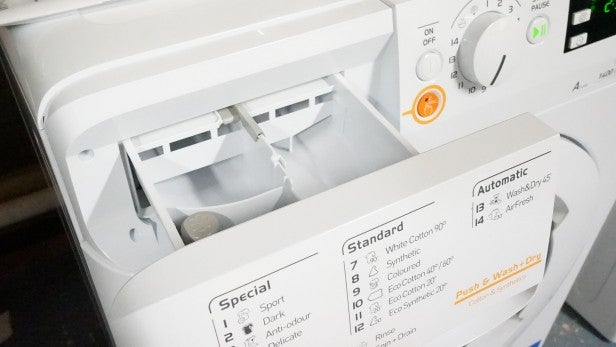 As noted, the order in which the programmes appear is a bit left-field. The series of special programmes opens with, unusually, Sports wear in the number one spot. The sporty theme continues in the options menu too. There are dedicated options for Sports Shoes (two pairs at a time), Gym Kit (including gym towels) and Technical Wear, including Gore-Tex, according to the manual.

Also in the first suite of programmes are Dark fabrics, Delicates, Wool, a Rapid 30-minute wash and two Anti-Odour cycles for cottons or synthetics. These are designed to remove super-pongy odours such as sweat, tobacco smoke and doner kebab, with additional drum agitation during the wash and additional rinsing at the end.

All the special programmes use a limited maximum spin speed and are designed for loads of between 1kg and 3.5kg, depending on the programme. The max load for each is a little less if you’re adding a drying phase. 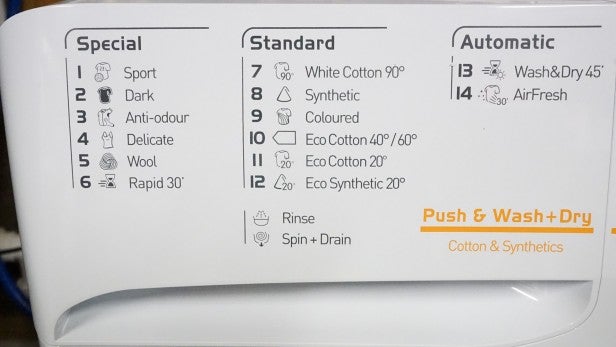 The main Standard programmes open with a 90oC White Cotton “boil” wash for linens and heavily stained whites. You also get a regular 60oC Synthetics load and a 40oC Coloured wash.

There are no less than four ECO programmes, with three for cottons at 60, 40 and 20oC, plus a Synthetics at 20oC. All of these are full 7kg wash and 5kg dry capacity and likely to achieve the most economical results.

The final two programmes are simple to use Automatic programmes. A Wash&Dry 45 quickly washes and dries up to 1kg of laundry in just 45 minutes, and the AirFresh programme gives up to 1.5kg of dry clothes a blast of warm air and a quick tumble to freshen them up.

A drying phase can be added to most of the main programmes, or this machine can be used as a tumble dryer independently. Drying level is calculated automatically with moisture sensors, leaving you to select Cupboard, Hanger or Iron dry. A fully manual option gives time-based drying up to 180 minutes. 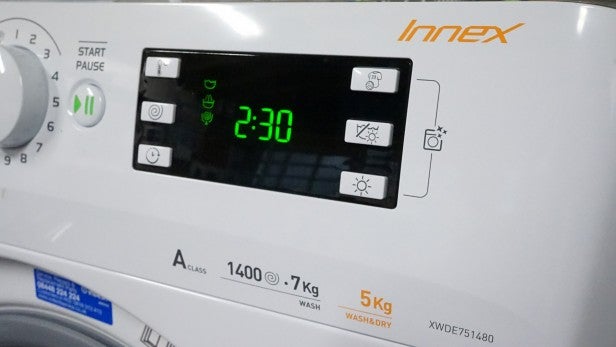 The programme and option roster is complete with the big orange button. The Push & Wash+Dry feature is for up to 3.5kg of cottons and/or synthetics, does a fully auto-wash at 30 degrees and then dries to Iron Dry level. You don’t even have to power up the XWDE 751480X first; simply insert washing and detergent, press and hold the orange button, and pop back a couple of hours later for the finished results.

That isn’t a shoddy roster of programmes and options for a washer dryer, but we do miss having a dedicated half-load option, and the running order on the programmer is rather odd. A quick glance at the soap drawer menu could easily see you accidentally putting a basic load on the White Cottons 90 degree wash, which would result in some very snug-fitting results.

With its compact drum front to back, we had our first ever loading failure with this Indesit. Our usual 5.6kg (80% of 7kg) main load simply wouldn’t fit in the drum. The last few items would have required a foot, some pushing and two people to lean on the door to get it closed. Since that was unlikely to elicit great cleaning results, we stopped at 4.5kg. In reality, this machine would be better labelled as a 6kg washer.

Using the Eco Cottons programme set to 40oC, hopes weren’t high for success with such a stuffed drum. Yet just over two and half hours later (quite quick by modern standards), the XWDE 751480X’s wash results were good for a washer dryer.

While residues of all six of our test strip stains could still be seen, the blood, ketchup, coffee and wine were all well addressed using just standard non-bio detergent. Some bio powder and the Indesit would have shifted them completely. The turmeric and engine oil proved stubborn as usual, with the latter not really showing a great deal of improvement. 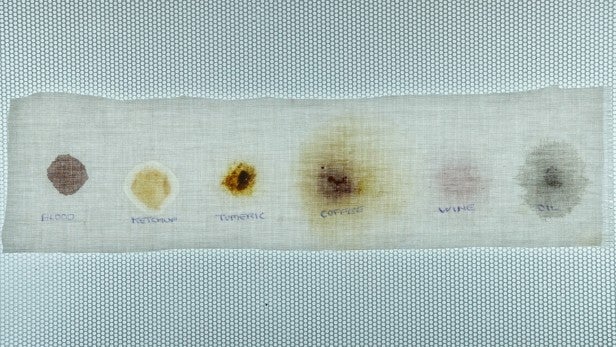 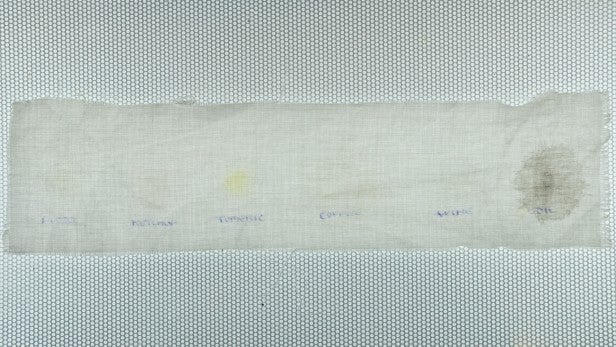 Spin-dry results were only average for this size of load, with some 1.7kg of water left in the load at the end, or around 37% of the dry weight. That would be poor for a washing machine at this price, but isn’t too far off typical washer dryer results at this level.

We loaded a “half load” weight based on our usual calculations of 40% of the stated maximum capacity, using 2.8kg of mixed washing on the Cotton Eco 20oC wash. This wasn’t so speedy, completing in just under three hours, albeit producing similar cleaning results. Spin efficiency improved a little with the smaller load, with some 35% of the original load weight in water remaining.

Re-washing the same half load on a combined Eco Cotton and dry programme added under an hour to total duration and resulted in a final wash with only a few grams of moisture remaining. If anything, the load was a little too dry (well under 1%) for the Hanger Dry level we’d set – and there was quite a lot of creasing too.

Re-washing at the Cupboard Dry levels resulted in what we’d term “hanger dry”, ideal for just being given a quick air before putting away. So while this machine dries smaller loads well, it might take a little fettling to get the best drying levels you require. 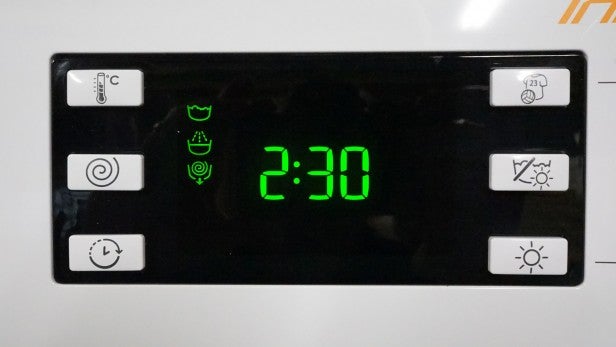 Energy and water consumption figures for the XWDE 751480X look good on paper, and the numbers stack up comparatively well against some more affluent washer-dryers we’ve tested of late. Yet when you factor in the Indesit’s relatively bijou load capacity by modern standards, and just 6kg rather than the 7kg stated in our opinion, the consumption and cost per kilogram of washing is rather more average.

Working on a UK household annually doing 200 x 40°C 80% max-load washes and 40 x 40°C 40% half-load washes – with the latter split 50/50 on normal wash and Wash+Dry programmes – this machine would cost a relatively frugal £37.50 per year in electricity. While that’s a little less than our recent favourite LG FH4A8FDH2N (at £41.90), the LG was tested using a 60% larger wash load – which is whole lot more washing over the course of a year.

If you’re being billed for metered water in and out, averaging £3.50 per cubic meter across the county, this Indesit is quite thirsty too. The main wash used 79 litres of water, with the half load down to 53 litres. Using the same usage calculations, this would add around £60 to your annual running costs. 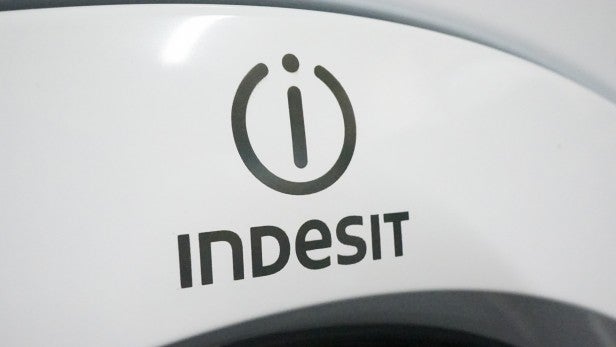 The Innex XWDE 751480X from Indesit is a relatively accomplished and affordable washer dryer from Indesit. Our main issue is the small drum that limits loads to under 5kg , although washing and drying performance are both good. Running costs are higher than separate washing and drying appliances, but if you need to save space and a few pounds then this Indesit isn’t a bad compromise.