Hot on the touch-controls of the great-value Indesit VIA6400C we reviewed last month, the VID 641 BC adds a timer, power boost and the ability to link two of the burners together to accommodate large pans and skillets. All this for just a few dollars more, with street prices coming in under £300.

Like its sibling, it’s no speed-cooking wonder – but solid test results, an easy-to-clean Schott Ceran glass surface, and those extra features make it even more of a bargain. It might not be Michelin-star performer then, but induction cooking doesn’t get any better value than this. 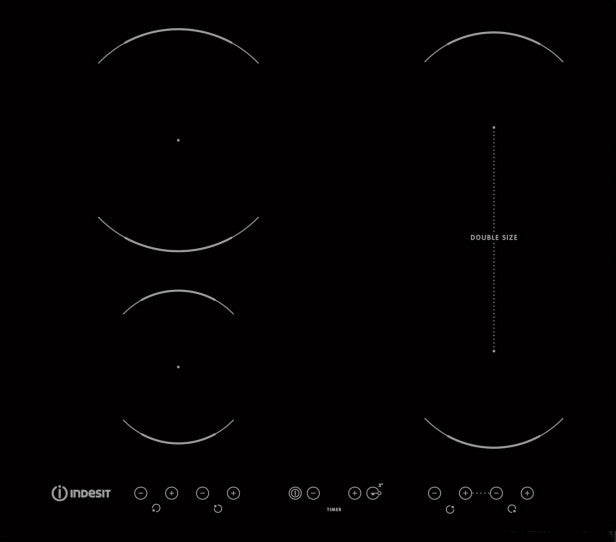 Indesit VID 641 BC – Design and Features

Indesit’s induction hob model numbers and feature-lists seem to be the work of several people who weren’t speaking to each other at the time. There are many models, each with slight variations or simply different model numbers depending on where they’re sold, and little obvious features-to-pricing structure.

That works nicely in favour of the VID 641 BC tested here. It shares the same £299 RRP as the VIA6400C we reviewed recently and rather liked last, but it adds a kitchen-cupboard full of features including power boost, linked burners for big pans and a timer. Go figure. 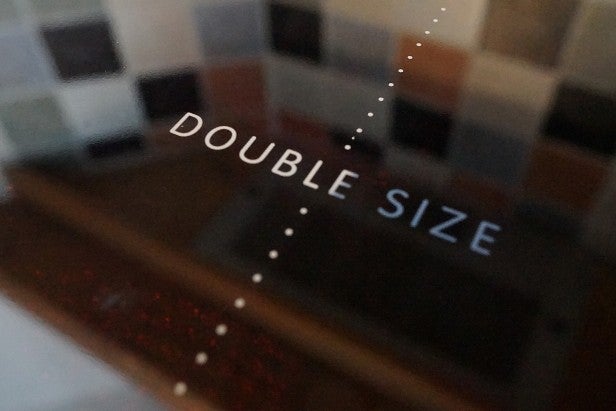 The good news starts with the Schott Ceran glass surface, which never fails to impress us with its smooth glossy finish and easy-to-clean surface. Here it’s a simple low-profile glass sheet with polished edges. There are no bevels or trims to accent the design, but the look remains clean and simple in conjunction with the fairly subtle grey control and zone-marking graphics.

Touch controls run along the front edge, with individual up and down controls for each zone. We prefer this to zone selection and a single slider control since it’s more intuitive and takes less button presses when you have several pans on the go.

The four zones are designed for large and small pans to the left and two medium-sized pans to the right. These can be linked together as a ‘Double Size’ zone, as Indesit refers to it on the surface. Big fish skillets or steel hob-top casserole pans can span both burners with a single heating control. There’s no getting away from the fact it’s just two linked round burners rather than a dedicated larger zone however, so don’t expect super-even temperatures across the pan base.

Each zone has 0-9 level controls, and a further press engages the ‘P’ setting for Power boost. While we’ve seen some induction hobs with boost settings so potent they could cause brown-outs in small villages, the VID 641 BC’s boost is a more modest couple of hundred watts. 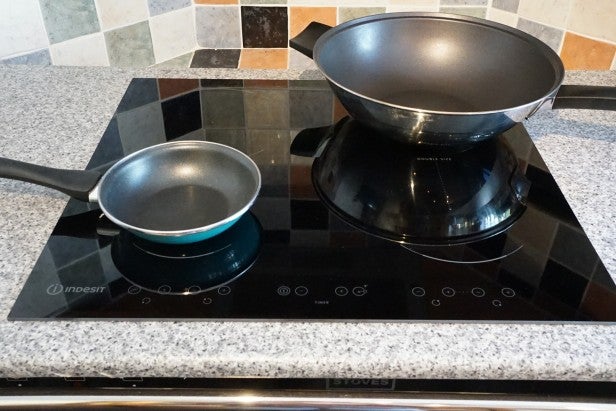 Slightly annoyingly, boost automatically cuts back to level 9 after precisely 5 minutes. As our larger pan boil tests (1.5 litres  and 2 litres of water) took over 5 minutes, you can’t necessarily use these extra watts to bring a pan right to boiling. It does speed up initial heating, and this hob managed to shave 50 seconds or so off our 1.5-litre boil test compared to the VIA6400C.

Rounding off the features list is a basic timer, hot-hob warning symbol for each zone, and a hob lock-key that turns off all control when held for 3 seconds. Hold for 3 seconds for a second time and it comes back on. The individual power level displays are a crisp, bright red. So much for those subtle looks while cooking then. The ear-piercing key-beeps have been ported over directly from the VIA6400C. 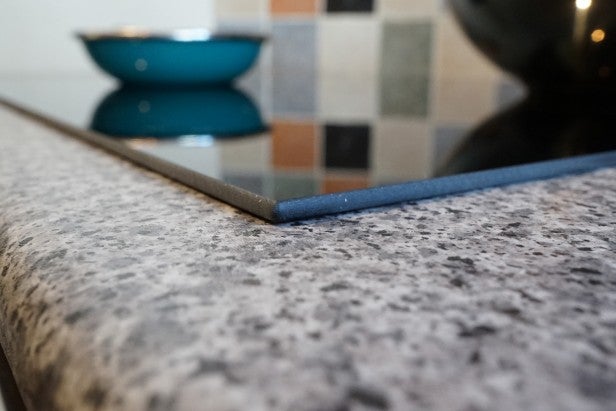 In day-to-day use, the VID 641 BC is a little more clunky than the very best induction hobs. The touch controls are generally responsive after a fraction of a second delay and the touch sensitivity is good. There were a few occasions where the sensors didn’t pick up on a light or quick touch, particularly with damp fingers, but certainly not enough to frustrate.

The individual controls for each zone work very well and it saves having to select the zone first before operating the single central power control as per the VIA6400C. It might look a bit fussier in use, and a little more complex with all the icon graphics when switched off, but it’s certainly more instinctive. 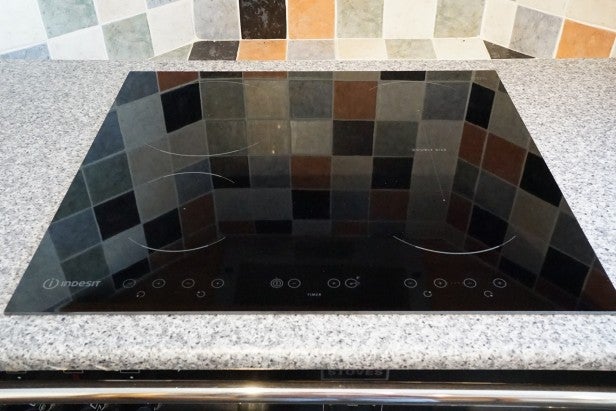 The Double Size zone is activated by pressing and holding the linked keys for each of the two zones. Another beep indicates they’re linked and you get single controls and single levels on the display. If you don’t get a pan on the hob covering both burners within a few seconds it automatically kicks back down to a single zone.

Power to each zone proved consistent at all levels, with very little power drift over time or as things get hot. That makes for good simmering abilities, even if this hob isn’t blessed with a dedicated simmer function. Simply gauge the power level to simmer accordingly, old-school chef style.

Once again, Schott’s Ceran glass came up trumps for cleaning, fending off everything we threw at it with a wipe or a light scrape. Schott is keen to point out the devil of removing melted sugar from its glass surfaces and to be very careful to avoid such spillages … so we tried it. Once cooled, it simply chipped off fairly easily. This is more than can be said for the experiment’s tarte-tatin on my waistline. 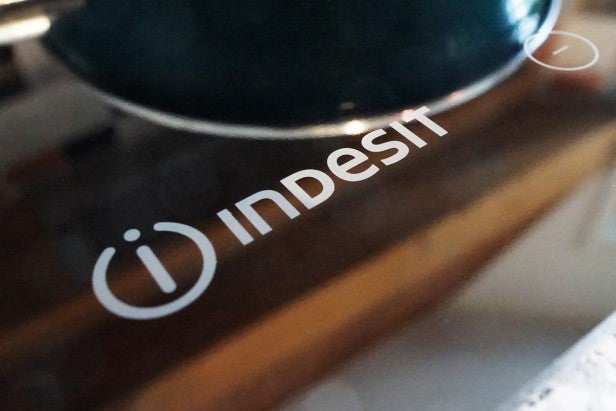 Each of the four zones has a simple 1-9 power level and the mini-boosting Power Boost function. The two burners on the left are radically different sizes for smaller and larger pans, while two identical burners to the right are good for mid-sized pans. You can use smaller pans on larger zones with minimal loss off efficiency, but it doesn’t work too well the other way around.

Thermal imaging of each zone showed standard round burners with no obvious cool spots and even pan-base heating. Linking the two right burners together simply creates two round heating zones with a cool gap between. That isn’t going to give you very uniform heating for large pans that span these two zones, particularly if they have a fairly thin base metal.

Heavy iron skillets will best dissipate heat from both burners, but you’ll still want to keep frying contents moving around there pan to avoid some parts cooking quicker than others.

Marrying our 17cm, 19cm and 21cm pans to the small, medium and large burner zones accordingly, we measured the time it took to bring 1 litre, 1.5 litres and 2 litres of cold water to 90oC using the ‘P’ Power boost setting. While the VID 641 BC is no speed-chef in this respect, the boost function did make it quicker than its VIA6400C in all three tests.

The smallest burner delivered 1700W of power to our small pan, bringing it to temperature in a reasonable 4mins 15secs. Interestingly, there was no difference in power to the small pan or heating time between the ‘P’ setting and the level ‘9’ setting on this zone.

Both mid-sized burners delivered 1800W to our medium pan on level 9 and added a useful 200W in Power boost mode. That brought the 1.5 litres of water to temperature in a once again reasonable, if not speedy, 5mins 15secs. The last 15 seconds of the test were at level 9 since the boost function automatically disabled after 5 minutes.

The largest zone was perhaps least impressive, since the burner isn’t actually as large as the zone graphics would have you believe. It delivered 2150W to our large pan in ‘P’ mode, just 150W more than level 9, finally bringing the 2-litre water sample to temperature in a lengthy 6mins 40secs. Again, the last 1min 40secs of that was on level 9 rather than boost.

Okay so those times aren’t rapid by any standards, with the very best premium induction hobs capable of taking at least 2 minutes off those times. Yet the VID 641 BC isn’t the slowest hob on the market – and with nicely even heating throughout, maybe speed isn’t everything. Well, not at under £300 anyway. 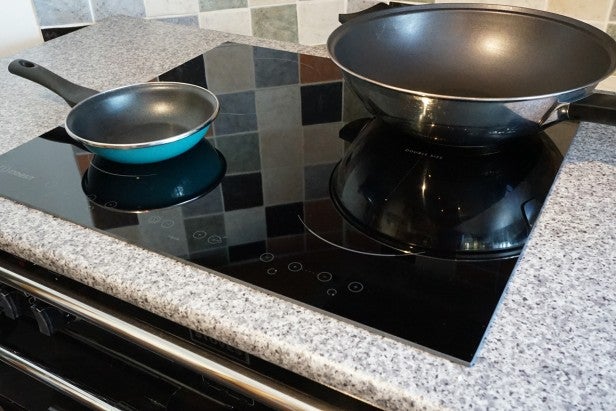 The VID 640 BC is a bit slow to heat pans up from cold, not helped by the boost function’s 5-minute time limit; plus the loud key-beeps could drive lesser mortals insane.

It isn’t short on features at the price, however, offering very even pan heating, nicely intuitive controls and the ability to link two burners for cooking with more sizeable pans. So, if you’re not in that much of a hurry and rather more chilled to the beeping, this induction hob is a first-class bargain at the price.