There was a moment in the movie Spider-Man where I realised that Sam Raimi really knew what the character and the comics was all about; the moment Peter Parker throws off his fear, his guilt, his teenage angst and heads out into the city, swinging from building to building, tumbling acrobatically through the air in a glorious celebration of his newfound super powers. The rest of the film and the sequel confirmed it – freedom, great power and, of course, great responsibility – all the great themes and pleasures of a classic comic-book enshrined in celluloid for everyone to enjoy. 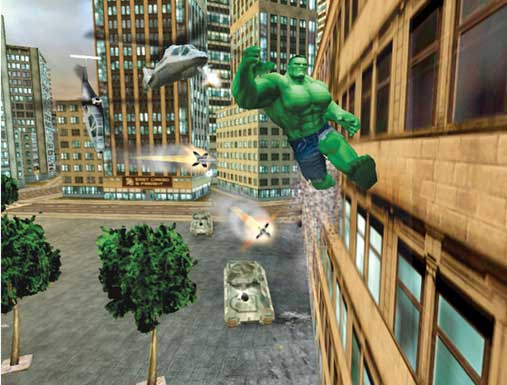 If only super-hero games could do the same: capture that feeling of what it would be like to cast off your dull human limitations and take to the skies, leap tall buildings with a single bound, fight injustice with unearthly powers. A few manage it – Spider Man 2 or City of Heroes, for instance – but most fail miserably. Take Fantastic Four, for example. While it pays closer attention to the comics than the film, the game is still little more than a collection of scripted battles, with Mr Fantastic limited to some long-range punching and the Human Torch seemingly chained three feet off the ground. It couldn’t have been more mundane if it had tried.


The Incredible Hulk: Ultimate Destruction is different. Admittedly, it does little to capture Bruce Banner’s pain at his uncontrollable transformation into a rage-fuelled, savage titan, but it certainly conveys the pleasures of hulking out. Imagine you’re the world’s grumpiest toddler having the world’s worst tantrum in the world’s biggest sandbox with all the best toys at your disposal. For once, the title is right on the money. 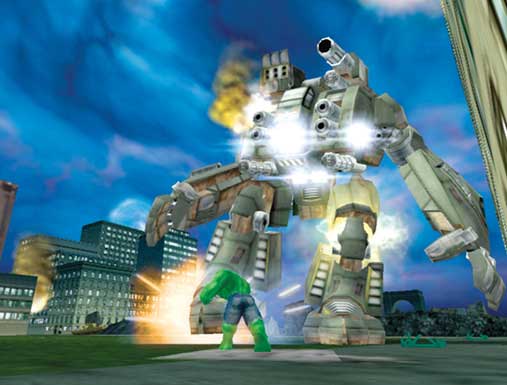 Sandbox is an appropriate word, because like Spider-Man 2, Ultimate Destruction takes a leaf from the Grand Theft Auto book. After a brief prologue in the wilderness, the game shifts to a large-scale city environment, full of skyscrapers, traffic, a handful of pedestrians and a whole lot of police. It’s a big wide world, but then it has to be – with a huge repertoire of moves and capabilities, the Hulk can climb the tallest sidescraper, pound his way clean up the side of buildings, leap from rooftop to rooftop and smash his way through anything that stands in his path. This is one of those rare games, like Prince of Persia, where just getting around is part of the fun.

Of course, the population – and especially the police – don’t take kindly to a huge green giant bashing his way through public property and leaving craters in the streets. Still, what do you care? Bah, puny humans. Punch them, kick them, grab them and throw them at each other. Break off a lamp post or a tree and swat them around with it. Crunch up one of their vehicles and send it flying. If they won’t go quietly and send in the troops and tanks, then cover your fists in steel and send them packing where they came from, or turn a bus into a handy skateboard and grind them into oblivion. It’s hardly the most public-spirited game, when you sit down and think about it but, boy, is it crazy, cathartic fun. 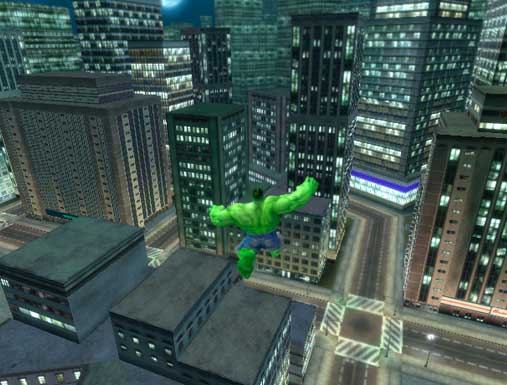 The game is structured around a central plotline, with Banner up against a sinister military agency and its Hulk-hating head, but the wonderful thing is that you’re not tied to it. The story missions are accompanied by a set of wild and often whacky challenge missions, which might be as simple as a checkpoint race or a car kicking competition, or involve something more complex like rescuing civilians from a burning building and dropping them off with an ambulance below. If you’re stuck on a mission or just fancy a quick blast around town, there’s always something to catch your attention and put a big cheesy grin upon your face. 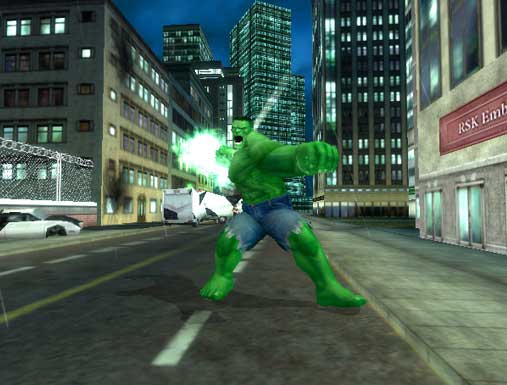 Now, you might think that all that destruction is going to get dull after a while, but this Hulk effort is brilliantly paced. The more story missions you get through, the more numerous and difficult the enemies you face. You’ll need more moves to defeat them, but you can build up a bigger and more powerful selection by earning points in missions and challenges, then using them to buy a few more combos. More become available with each chapter of the game. Just when you think you’ve mastered one set of powers and cadre of enemies, there are new powers to learn and new, more dangerous opponents to fight. And after a few hours, the action switches to a new environment – a huge desert full of canyons, military bases and dusty towns – with its own challenge missions and enemies to fight. With two large maps to barrel your way through, you won’t be left wanting for places to go or things to do for some time.

Having the imagination and ambition to create a game like this is one thing, having the technical skill to pull it off is quite another. Luckily, the team at Radical has done a fantastic job. The controls should be a lesson to most developers – they allow a huge variety of actions while never proving too confusing, and make shifting the Hulk around steep canyon sides or up, down, across and through the city a wonderfully fluid experience. Even when there is an enormous amount going on onscreen, the camera rarely makes a mistake and the frame rate hardly seems to falter. This isn’t a beautiful game in terms of detailed textures of gobsmacking effects, but it has a strong, colourful comic-book character that really brings the whole thing to life. And the audio, from the pounding score to the sound effects to the super voice work is equally impressive. 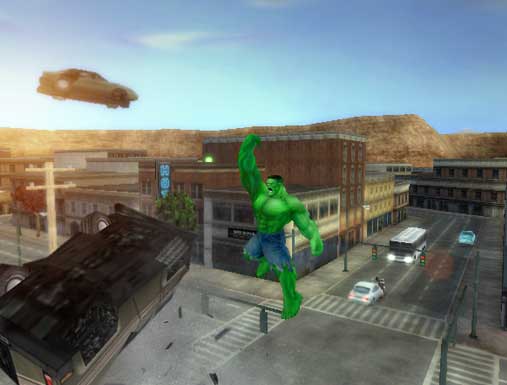 I’m not going to pretend this game is perfect. There is a tendency in later stages to throw a little too much firepower at you, making it almost impossible to stay on your feet long enough to start taking out the Hulk-Buster mechs and swarming tanks. Arguably, the ease with which you can afford new moves makes it unnecessary to do anything much in the challenge missions, and it has to be said that the boss battles are a bit of a chore. All I can suggest if you end up having trouble is to persevere, and look for a way around the problem. One convoy-destruction mission seemed impossible until I realised I could use jump points to outpace and ambush the trucks. A boss battle proved equally difficult until I discovered that you had to take out the radar towers first. One of the strengths of the game is that it’s not the dumb brawler it first appears: without a strategy, even the mightiest monster can get mashed. 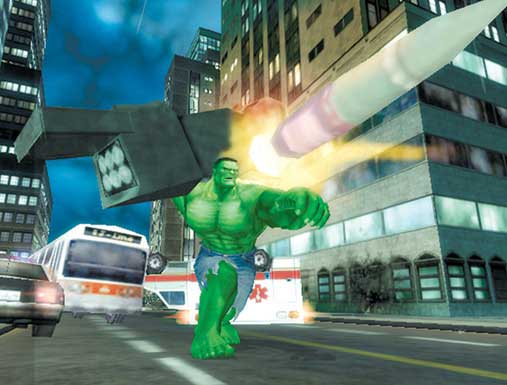 Let’s go straight to the bottom line: if you misspent your youth reading comics or just like super-hero movies, then it’s hard to imagine that you won’t have a ball with this game. It’s one of the finest and most inventive action games this year, and if it doesn’t sell double what Fantastic Four did I’ll be annoyed. Really, really annoyed. So be warned: don’t make me angry – you won’t like me when I’m angry.


Finally – a super hero game that gets it right. Fast-paced, fun and more sophisticated than it looks, Ultimate Destruction delivers the most satisfying large-scale tantrum in town.