Immortals Fenyx Rising is the most gleeful interpretation of Greek Mythology I’ve seen in gaming for years. It’s a bright, colourful and sharp vision of a mythical world brimming with imagination, and does everything it can to ensure the player is free to explore it however they see fit.

This enthusiastic interpretation of Zeus, Prometheus and all of their pantheon pals is held back by a fairly archaic open-world formula, but the sheer act of existing in this world is a joyous wonder, with each new discovery bringing fresh satisfaction. Its vast and varied setting, impactful combat and inventive puzzle design help Immortals Fenyx Rising fend off criticisms that would have sunk similar outings in the genre, resulting in a welcome new IP from Ubisoft.

While it’s far from perfect, Ubisoft has crafted a gorgeous adventure I happily embarked upon, standing in awe as each new region greeted me with an endless range of possibilities. It’s simply unfortunate that despite wearing its Breath of the Wild inspiration on its sleeve, Immortals Fenyx Rising never quite reaches the heights of the greats it draws from. In fact, it seems determined to regress into something far more predictable. 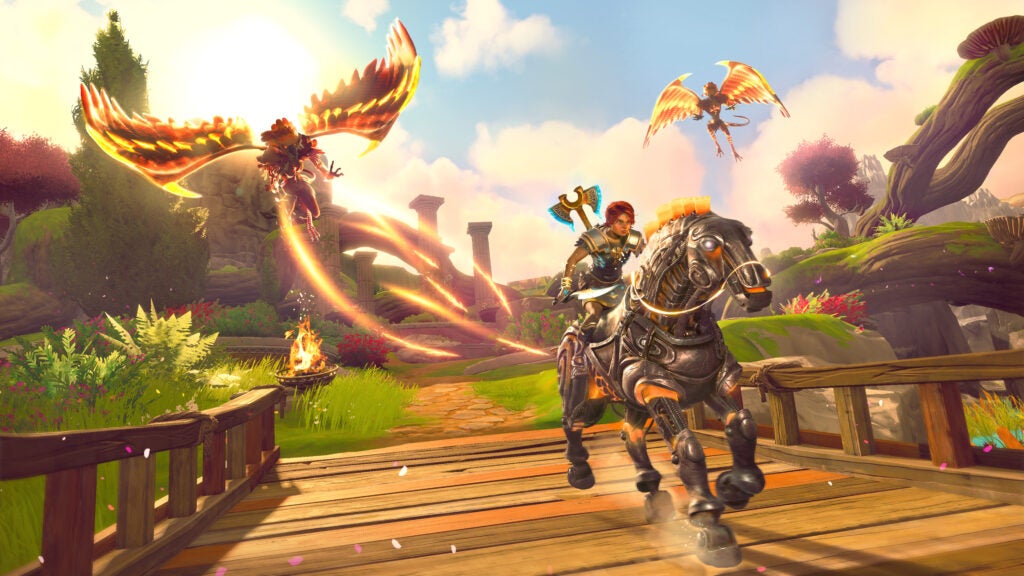 You play as Fenyx, a young warrior who discovers that the entire Greek World has been conquered by Typhon, a deadly god determined to reshape this beautiful realm in his own image. All human life has been turned to stone, including the ones you love. This small inconvenience is motivation enough for Fenyx to embark on an epic quest to reunite the inhabitants of Mount Olympus and stage a comeback of literal godlike proportions.

The narrative is weak with very little substance, but it’s helped by the humorous addition of Zeus and Prometheus as narrators. This fumbling duo adds substance to the entire ordeal, describing Fenyx’s actions as they stumble upon monuments to the gods with observations both heartfelt and humorous. While they bugged me at first, I soon grew in love with these idiotic goofballs as they cracked jokes about their loved ones while also offering profound history lessons from the world of mythology.

Without them, Immortals Fenyx Rising would feel very lifeless, with their tone matching the saturated colours of Ancient Greece perfectly. Though be warned, the writing is very mixed, with many jokes failing to land as Ubisoft tries desperately to create something that appeals to everyone on a comedic level. Thankfully the dialogue swings enough hits to be endearing, most of the time. 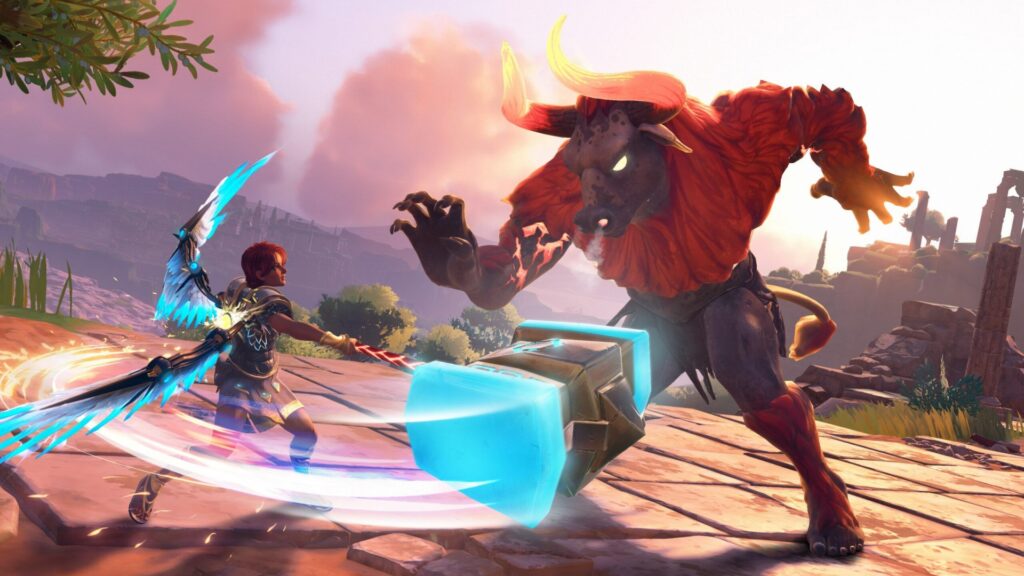 Once the plot is established, Fenyx embarks on a journey spanning several different regions each with their own distinct gods, weather and landmarks to uncover. The core mission is simple, save these gods from their unfortunate circumstances by uncovering their essence from vaults. These areas are fascinating excursions that feel like fully-fledged dungeons crammed with intricate puzzles and challenging boss encounters.

You’ll need to befriend the struggling pantheon before they entrust you with such a task. However, they aren’t exactly in the best of moods. Aphrodite has been transformed into a stationary tree, while Ares is cursed to live out the rest of his days as a useless chicken. Typhon has transformed these once monolithic individuals into shadows of their former selves, ripped of the power and confidence gods have long been accustomed to.

Situations such as these are brilliant, forcing gods to acknowledge their own insecurities in a way that can be surprisingly touching, even if they’re delivered with the subtlety of a jackhammer. Despite this, it’s clear Ubisoft wants to explore the Greek pantheon in a way it hasn’t before, setting Immortals Fenyx Rising apart from Assassin’s Creed.

I can’t blame them for this, since at first glance the similarities are rather damning. Even if you saw everything Assassin’s Creed Odyssey has to offer with its interpretation of Ancient Greece, this new adventure still has plenty of surprises. Immortals Fenyx Rising draws more from Breath of the Wild than anything else, treating Nintendo’s masterpiece as a blueprint. 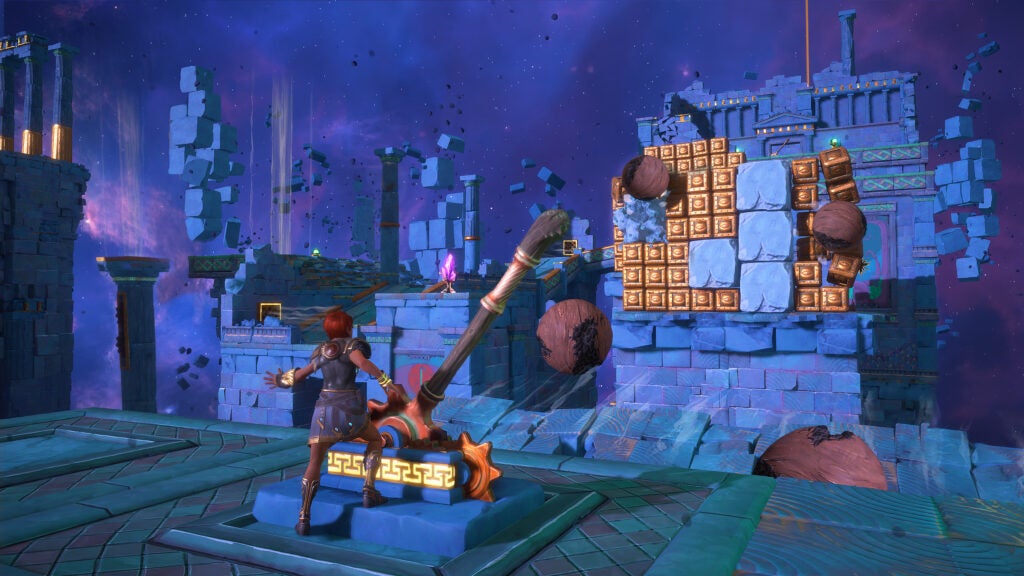 The act of exploring feels pulled straight from Breath of the Wild. Fenyx will clamber up cliffs and glide across the landscape and the world itself is populated by Vaults of Tartarus which are just rebranded shrines filled with puzzles and enemies to conquer. There are horses to be tamed, enemy encampments to pillage and chests aplenty simply waiting to be plundered. Ubisoft isn’t being subtle here, and I can’t blame it.

I found the ideal way to uncover the world of Fenyx Rising was to turn on minimal interface options and stumble upon things of my own accord. Otherwise, it can become an icon janitor very, very quickly. You will ascend towering statues upon waltzing into each new region, entering a first-person view to scout out vaults and activities to be tackled. This creates a laundry list of tasks that quickly grows overwhelming, and tackling them one by one kills the joy that comes with exploration.

You’ll stumble upon distractions often enough that only marking main quests on your display is totally possible, leaving other tasks as wonders to be tackled whenever you see fit. It’s bizarre that Ubisoft has taken everything from Breath of the Wild except the joy that comes from experimenting with its world on your own terms, learning how its various systems interact and impact upon its environment. By comparison, Fenyx Rising feels tamely predictable.

Each positively massive landmass is filled with the same assortment of activities which offer the same rewards and same predictable gameplay patterns, although a few stand out. Constellation challenges are excellent puzzles which task you with collecting fluorescent orbs from across the area to place into a specific pattern. These orbs are obtained by completing puzzles of their own before slotting them into the wider picture. 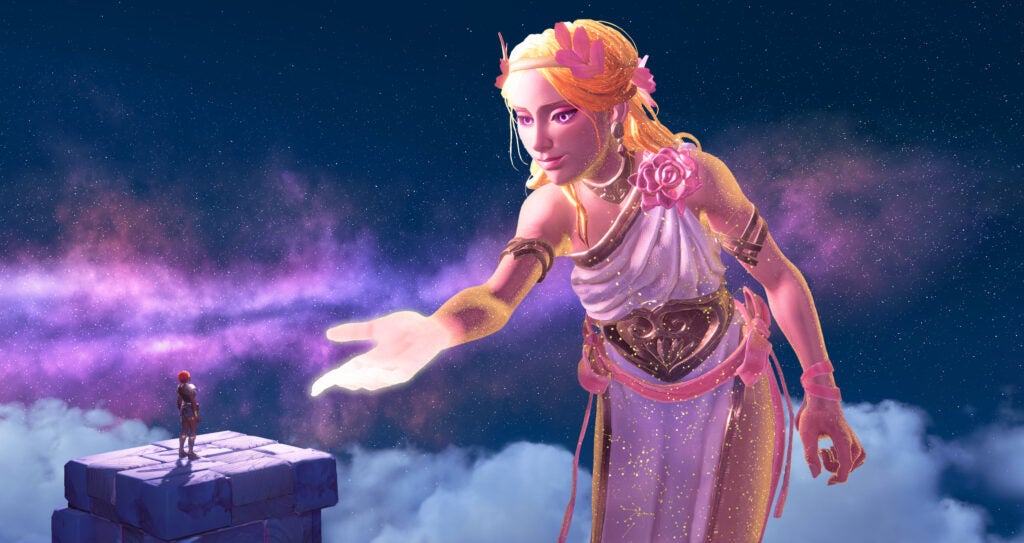 Moments like these are wonderful, with all of Fenyx Rising’s mechanics intertwining to test your skills in some excellent ways. Vaults of Tartarus offer similar moments of ingenuity, even surpassing Breath of the Wild in the clever ways they combine combat, platforming and quick thinking. At times the camera and stamina system can feel like obstacles to enjoying them to their fullest, but such annoyances are small grievances I came to accommodate.

Completing Vaults and Constellations will reward you with Zeus Lightning which can be used to enhance your overall stamina. Weapons, health, armour and countless other traits can also be upgraded with resources naturally gathered throughout your journey, although you need to visit a central hub area to commit them.

This feels a bit intrusive, as do the animations which play every single time you upgrade something. It’s yet another attempt by Immortals to be funny, but it simply comes across as obnoxious. Hermes also hangs out in the hub area, acting as a storefront where you can spend currency earned by completing daily and weekly challenges. I completely forgot about these for most of the game, renewing them at the 20-hour mark and being greeted with an avalanche of goodies.

Systems like this are symbiotic of the open-world design Ubisoft has fostered for over a decade now, which holds back the bold steps forward Immortals Fenyx Rising is trying to make. It arguably undermines some of its greater moments, making its world feel artificial and bloated with needless side content regardless of how engaging it might be. 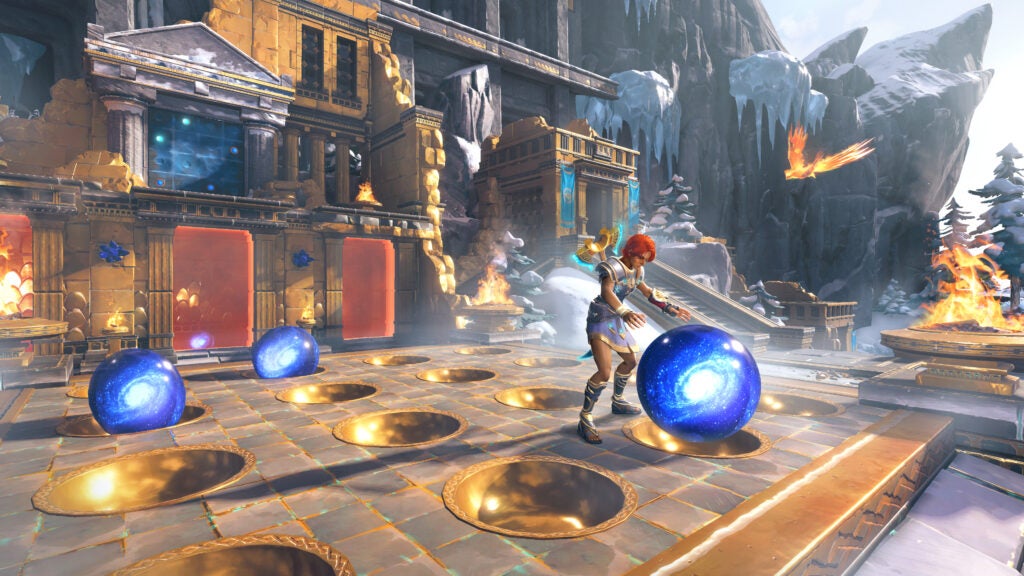 Combat feels similar to Assassin’s Creed. You attack with two different weapons using the shoulder buttons, while an assortment of skills can be executed by holding a trigger and pressing the face buttons. How often you can use such abilities are dictated by your stamina, which restores fast enough that it’s easy to conquer most encounters by spamming them to your heart’s content.

I’d recommend playing on hard if you want even a modest challenge, since those who stay true to their upgrades will be overpowered long before the story ends. Certain boss encounters offer more profound layers of strategy, as do wraiths which appear in each region at random, interrupting exploration with a bout of combat that honestly felt intrusive to how I wanted to play. Luckily, they can be dispatched pretty swiftly.

Simplicity aside, combat is a fast and frantic affair with plenty of accessibility for those who don’t fancy a daunting challenge. Enemies react to each attack with sufficient impact, flying across the screen once the final strike lands. Fenyx is deliriously fast too, capable of dodging attack and leaping into the air to deliver a mixture of sword slashes and hammer strikes. The small window of slow motion that arrives with each perfect dodge makes you feel like a true warrior, with all manner of mythical creatures ready to do battle. 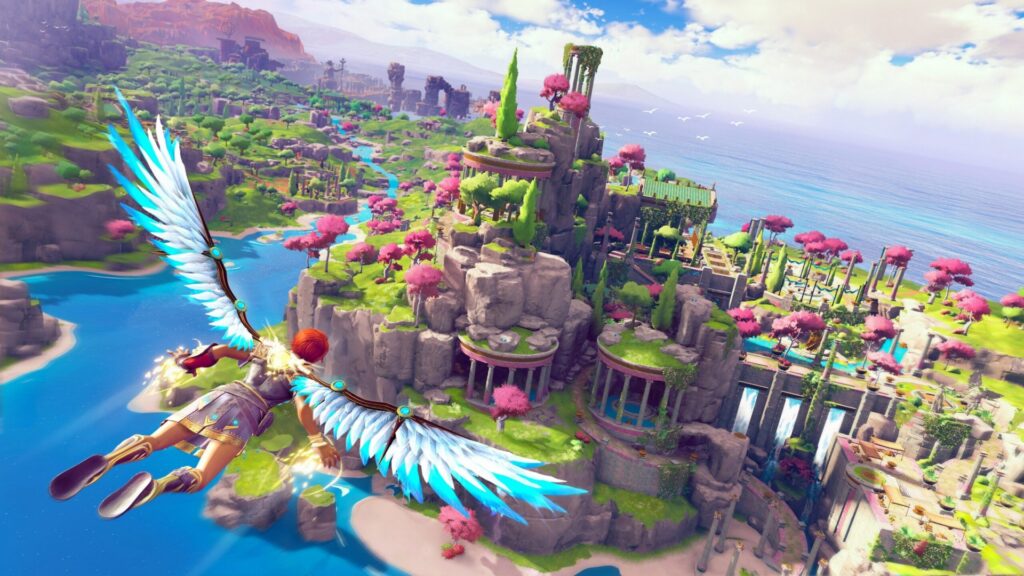 The tone and atmosphere of Immortals Fenyx Rising is one of its finest qualities. It feels so whimsical, tackling Greek Mythology with a sense of mischievous fun without ever undermining the creativity of its pantheon and the countless tales that define it. Hearing about each new character was a joy, and seeing how Ubisoft decided to interpret their appearance and personality.

I also love how unapologetically queer this vision of the mythos is, unafraid of expressing how the Greek world wasn’t bound by the constraints of gender and sexuality. Zeus will natter on about past flings with men and women across the pantheon, while also making nuanced observations about gender identity and the freedom of one’s self with Prometheus by his side. It’s both true to the literature it draws upon and inclusive in the context of our modern world, and I hope more games take this approach moving forward.