Immortal: Unchained is Dark Souls with guns. If you’ve seen any of the pre-release trailers, you won’t be surprised to learn this of course, with the developer, Toadman Interactive, describing it as being “inspired by the emerging hardcore action-RPG genre”. Sadly, beyond the addition of guns, Immortal: Unchained has disappointingly low ambitions to innovate, instead serving only to highlight how much the Dark Souls formula relies on the strength of its combat.

If you’re familiar with the Souls-like, or ‘hardcore action-RPG’, genre, then you’ll recognise the core elements synonymous with the Dark Souls series implemented here, once you’ve figured out what everything has been renamed to. Everything has gone through the ‘find synonym’ option in Microsoft Word, but it’s all there. Souls, the currency you collect from enemies to spend on upgrades, are now called Bits, while the save points are Obelisks instead of Bonfires.

So, it’s the standard Souls-like experience in a science-fantasy setting. You adventure through various grim locales, fighting through brutally difficult combat encounters and navigating the labyrinthine environments without the aid of a map. Along the way you’ll battle some enormous bosses and die. Lots. The guns themselves are the only defining characteristic of Immortal: Unchained, which makes their lacklustre implementation even more damning. 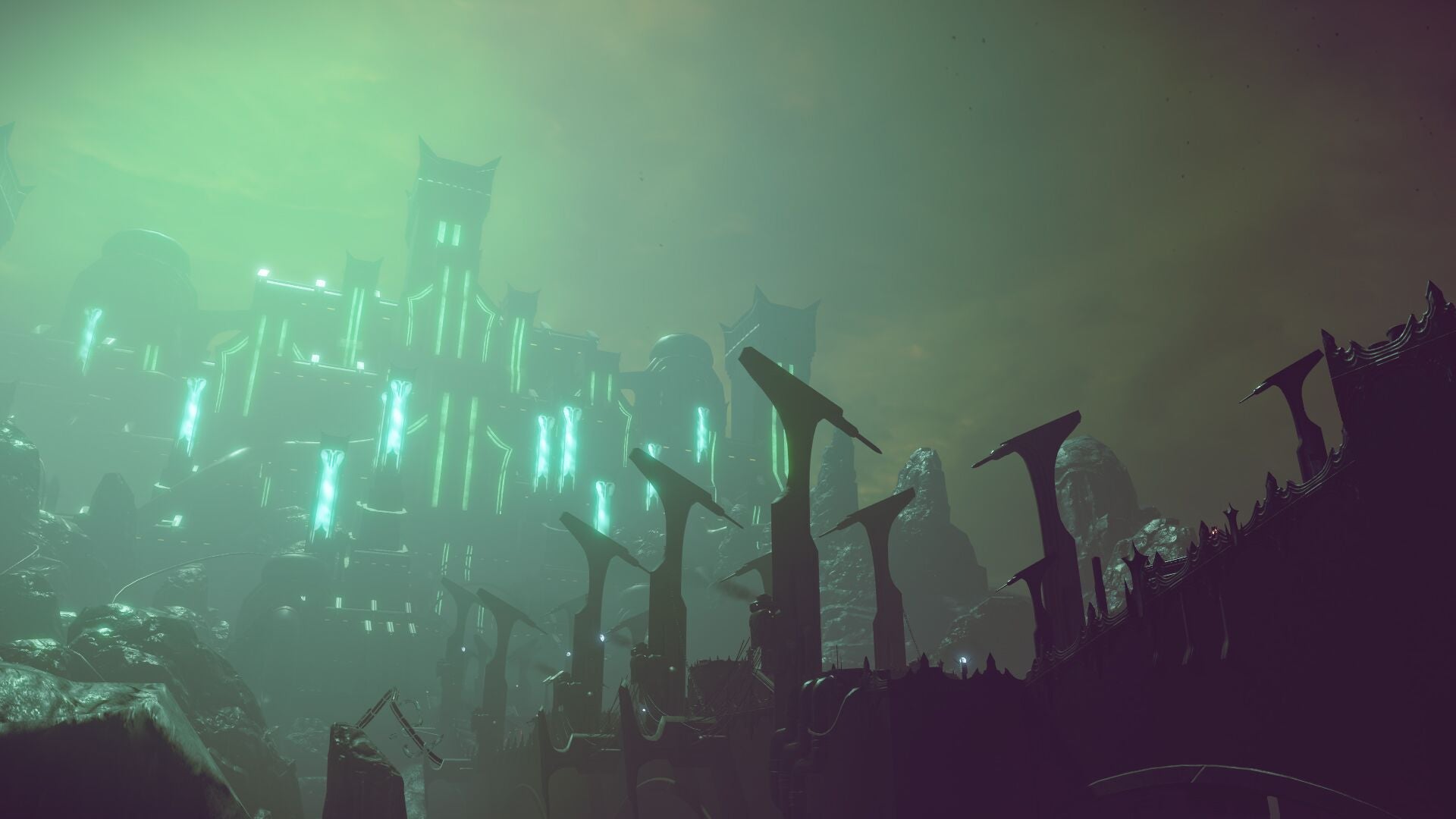 The arsenal of weapons available is disappointingly vanilla, with the standard armoury of primary weapons including assault rifles, shotguns, grenade launchers, and sniper rifles alongside sub-machine guns and pistols for sidearms. The guns themselves feel meaty enough to fire, but the free-aiming system feels appallingly floaty on console. Your mileage may vary on PC with a mouse, but I quickly resorted to turning on lock-on aiming and never looked back.

Given the science fiction setting, magic is out the window in favour of a little technological wizardry. You still have a mana bar, but now it’s called energy and it’s used up when firing the secondary fire mode of each gun, referred to as power shots. Each gun has a different power shot ability, with some firing off underslung flamethrowers to light your foes ablaze, whilst others initiate a barrage of lead that empties the clip and staggers your foe.

While Dark Souls features a good mixture of ghoulish monstrosities interspersed amongst its menagerie of knights in armour, Immortal: Unchained’s line-up is almost exclusively populated by tanky robots. The bosses show a little more variety, with a special shout out going to one of the later enemies who is an honest-to-goodness, rooted to the ground tree. But even then, the vast majority of the bosses are variations on that same armour-clad robot archetype, usually with a party piece gimmick to set them aside from the rank and file.

As is tradition in the genre, the early bosses are recycled as regular mobs in the later sections of the game, albeit with reduced health. It’s nice to see the more inventive enemies reused like this, but this leads into the major issue with Immortal: Unchained, the monotony present in its combat. 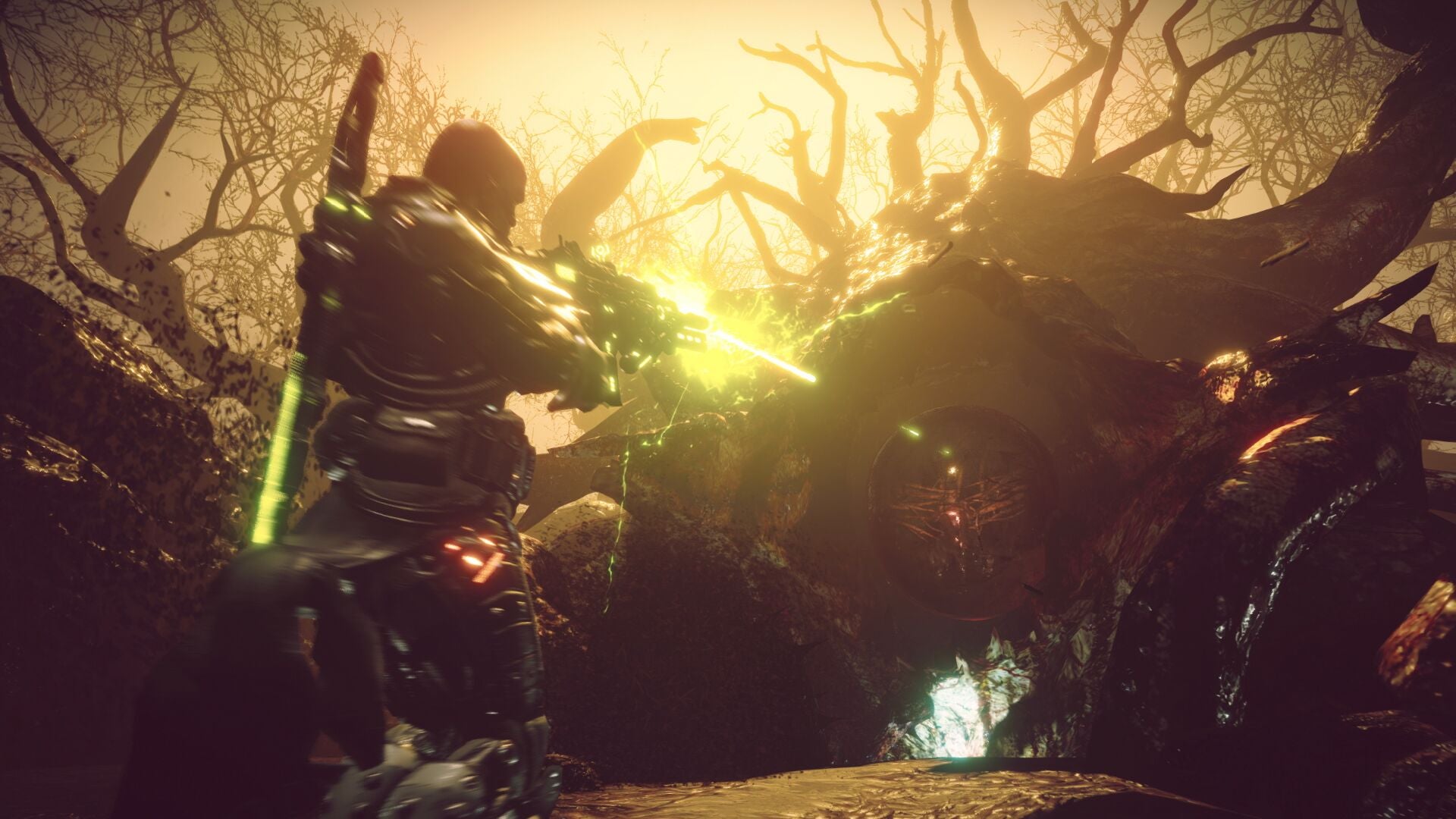 Every enemy in the game has the exact same weak point – a glowing orange hole on their back which you can shoot for massive damage. This universal Achilles’ heel leads to incredibly repetitive combat encounters, almost negating the point of putting guns in the game in the first place; enemies will never show you their backside at range, so the only way to exploit this weakness is to lure them in up close, sidestep their attack, and use a shotgun on their weak spot.

There’s also a range issue with most of the guns, in that they don’t any. Most of the sniper rifles have an effective range of 25 metres, which is a poor showing for a Nerf gun, never mind a futuristic sniper rifle. Why you’d choose to focus on guns only to downplay the feature that separates them from other weapons is beyond me.

Another issue is that Immortal: Unchained also seems to have an infatuation with teleportation, because almost every area features an enemy type who can pop up out of thin air behind you to ruin your day. The cynic in me thinks that having enemies teleport to the optimal location for wrecking you is quicker and easier than programming in intelligent AI positioning, a theory backed up by the woeful AI of the other enemies.

Foes that haven’t mastered the art of translocation can be split into three camps: melee dudes who run up and smack you; shooty dudes who walk up to you menacingly, laying down a hail of fire; and the other shooty dudes who hang back to barrage you from range, seemingly having gotten the memo about the key advantages that guns have over swords. 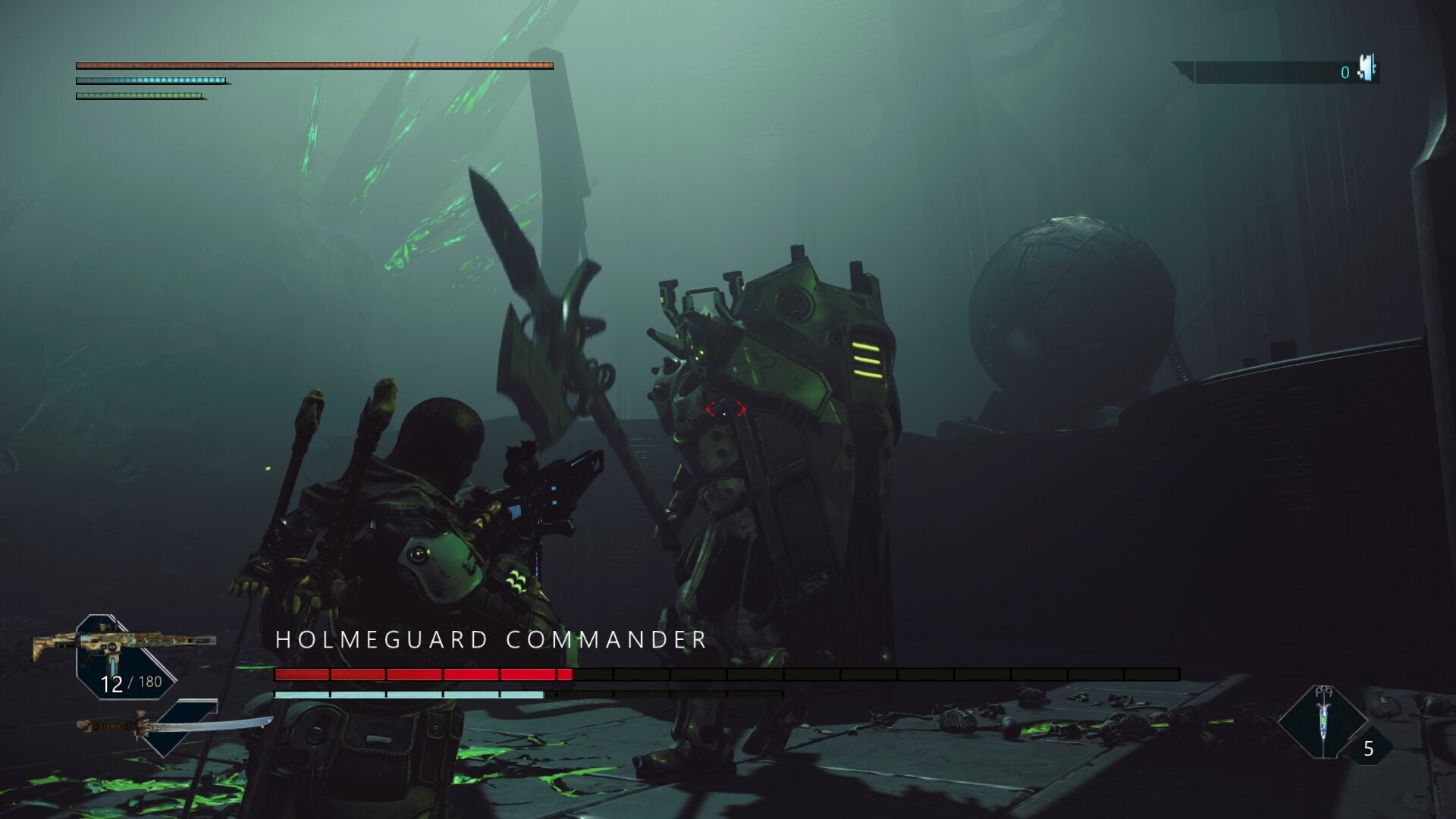 AI intelligence is forgone in favour of cheap ambush tactics enabled by teleporting shenanigans or enemies unexpectedly springing out of stasis pods. Now, I can already hear the cries of ‘git gud’ echoing through the thunderous halls of the internet, but hold your horses there my pro-gaming friend. Dark Souls likes a good old ambush every now and then, it’s famous for it, but ambushing is not the only string to Dark Souls’ bow. Sadly, a surprise ganking really is the only trick that Immortal: Unchained has up its sleeves to ramp up the difficulty.

There are a couple of innovative ideas that Immortal brings to the table which it should be commended on. Immortal: Unchained takes place across three different planets, all accessed using Stargate-like portals within a central hub area called the Core. Across these three planets you’ll find the standard array of environments – well-trodden favourites like the ice zone, jungle zone, industrial zone.

All that’s missing is the Aztec zone and I’d suspect we’d dropped into the Crystal Maze by mistake. The massive variation in visuals between locales is appreciated though, helping to avoid the feeling of drudgery inspired by 20 hours of the tepid combat.

Another neat feature is localised weapon damage. Shooting adversaries in the legs is more likely to stagger them, whereas some enemies can be disarmed, figuratively and literally, by sustained fire to the arms. These foes will eventually regenerate their lost limbs, but the ability to neuter the offensive capabilities of your opponents is a welcome addition to the Souls formula. 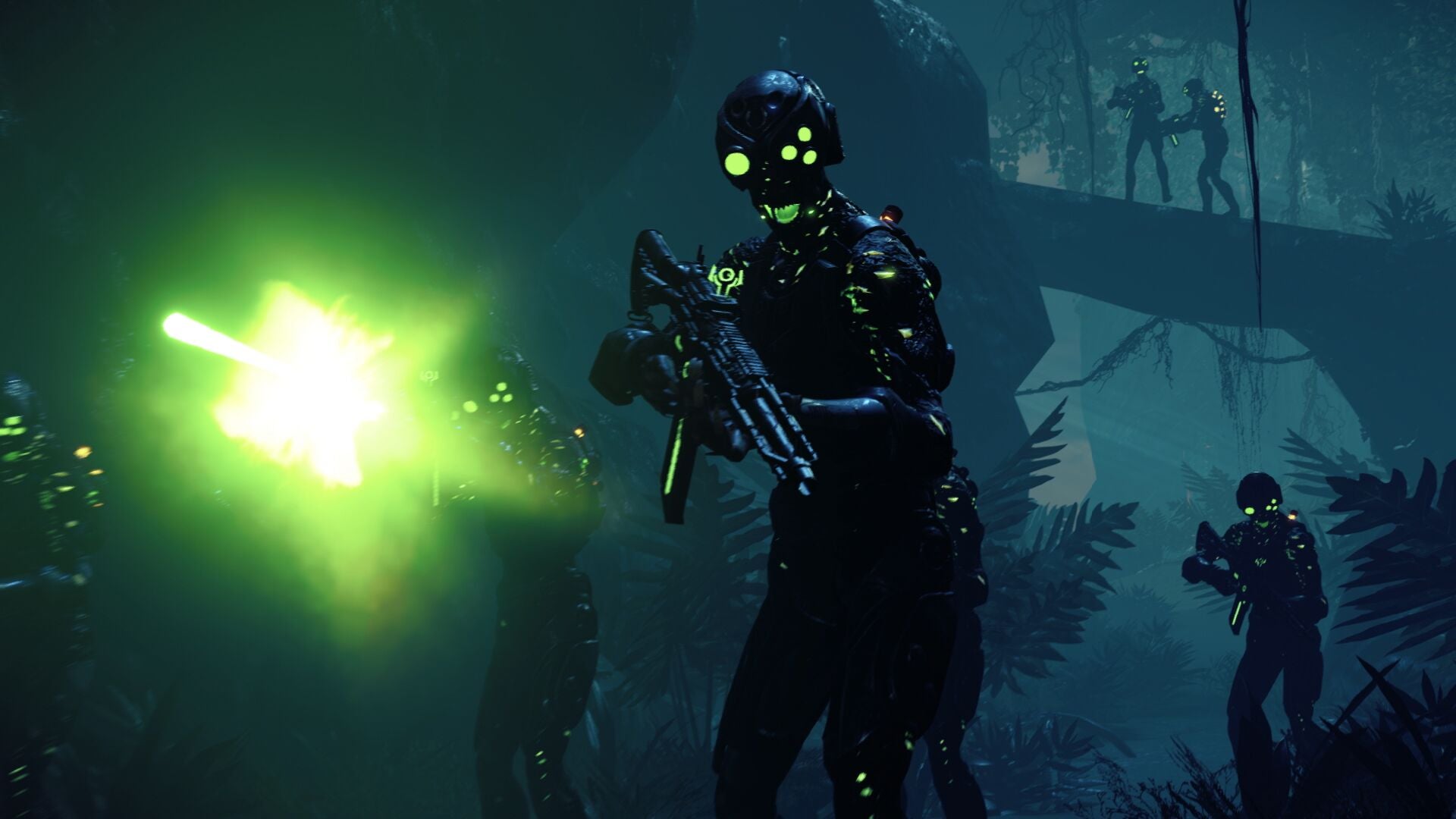 Finally, and most noteworthy of all the issues are the myriad of bugs which plague Immortal: Unchained. Throughout my playthrough I got stuck in the world geometry on several occasions, while teleporting enemies also managed to warp themselves into walls and then shoot me through them with irritating frequency. I know this is a hardcore game, but getting shot by solid walls is where I draw the line.

Ultimately, Immortal: Unchained serves to highlight one thing above all else. Every frustrating aspect of the Dark Souls experience is tolerated and even praised by its fans because the underlying combat system is so fantastically well-realised.

Strip that away and all you’re left with is a mediocre exercise in frustration. Immortal: Unchained has thrown guns into the mix, but no consideration has been given to how their addition might affect the classic Souls formula. Dark Souls but with bad combat is a tough sell.