Taking a closer look at those included peripherals. They’re also stylish yet flawed. The keyboard offers only a laptop-like compact design with squashed cursor and Enter keys and no numpad. For experienced typists both of these issues are quite aggravating. Otherwise, the overall layout and key action is good for a slim design, and in fact despite our reservations we were quite able to touchtype at a reasonable pace. 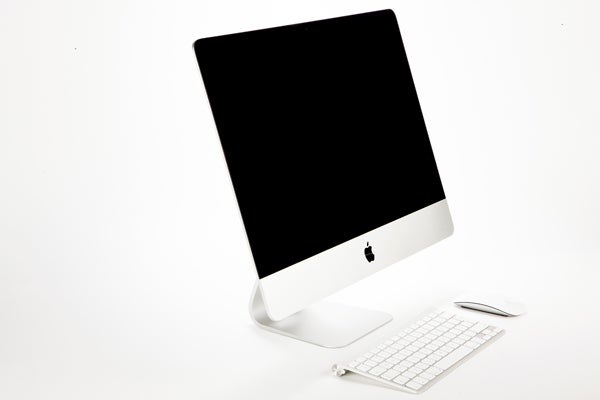 However, much more fundamentally flawed is the so called Magic Mouse. It’s quite clever thanks to its entire top surface being touch sensitive, allowing you to perform multi-touch gestures such as those for 360 degree scrolling, for swiping forward and back through picture galleries or websites and flicking between different desktops, but it’s just not very nice to use. The ergonomics are such that it’s rather difficult to grip, and performing those gestures isn’t exactly effortless. You do get used to it after a while but overall we’d much rather use a ‘proper’ mouse for gaming, picture editing etc, and have an Apple Trackpad on hand for general navigation.

Things aren’t exactly right back on course when we turn the new 21in iMac on. Its screen is certainly dazzling but those used to Retina iPhones, iPads and Macbooks will be disappointed at the relatively low 1920 x 1080 resolution on offer here. By all means it’s a typical (even good) resolution for this size of screen but once you’ve seen Retina, it’s hard to go back, not least because here on this larger screen (as compared to the relatively small screens of laptops and ipads) is where the option for a really high resolution would come in most handy – double 1920 x 1080 to 3840 x 2160 and you’ve got a seriously large desktop to play around with.

But, at least Apple has got most of the other key factors spot on. Viewing angles are essentially flawless with no colour distortion when viewed from off-centre and an absolutely minimal contrast drop off. Colour saturation is also excellent, giving images real pop, and the anti-reflective treatments on the glass front mean the screen doesn’t distract by simple reflecting your own face right back at you. 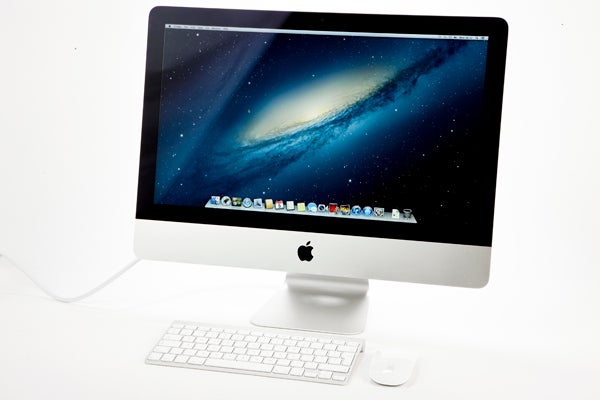 There are a couple of slip ups in the form of slightly below par dark detailing, which takes the richness out of dark scenes in movies in particular, and there’s fairly noticeable backlight bleed too, which again becomes noticeable when something dark is onscreen. So all told, graphics professionals and movie buffs may want to look elsewhere, but for general use it’s an impressive display.

Above the screen sits the webcam which is ‘iSight’ class so offer 5megapixel still photos and 720p HD video, as well as surprisingly good noise cancelling microphones for picking up your voice when making calls.

If things have been a bit up and down so far, there is one area where the new 21in iMac wants for nothing. Despite its diminutive chassis and no dedicated sub-woofer, this machine sounds, frankly, astonishing. We were quite prepared for the room-filling overall volume, the fine upper-range detail and spacious stereoscopic impression but the amount of bass on offer really took us by surprise. Testing it with raucous action movie sequences and even more raucous music it didn’t miss a beat, providing satisfying, engaging audio throughout. By all means it’s not exactly windows shattering and some dedicated speakers will offer more oomph, but you’d have to be spending well over £100 to offer an upgrade worth the extra clutter and bulk.