A super-low price and decent build quality make the iLife A7 Robotic Vacuum Cleaner stand out from the budget crowd, but the app that wouldn't work and below-par cleaning ability take the shine off.

Available for just over £200, the iLife A7 Robotic Vacuum Cleaner can only be described as shockingly cheap. Typically, products at this price lack features or have poor build quality. Impressively, the iLife A7 manages to avoid both of these traps.

Decent build quality, a selection of brushes, an LCD screen and even a remote control make the iLife stand out from the budget competition. But slightly random navigation, less-than-ideal dust pick-up and an app that wouldn’t connect show the more budget side of this cleaner.

A traditional round robot vacuum cleaner, the iLife A7 Robotic Vacuum Cleaner shakes off its budget origins and looks far more expensive than it is. A neat plastic finish and rugged feel help cement that opinion. And there’s even an LCD panel and controls, letting you start a clean and even schedule regular cleans. Needless to say, the controls aren’t as easy to use as an app, but it’s nice to have on-body control. 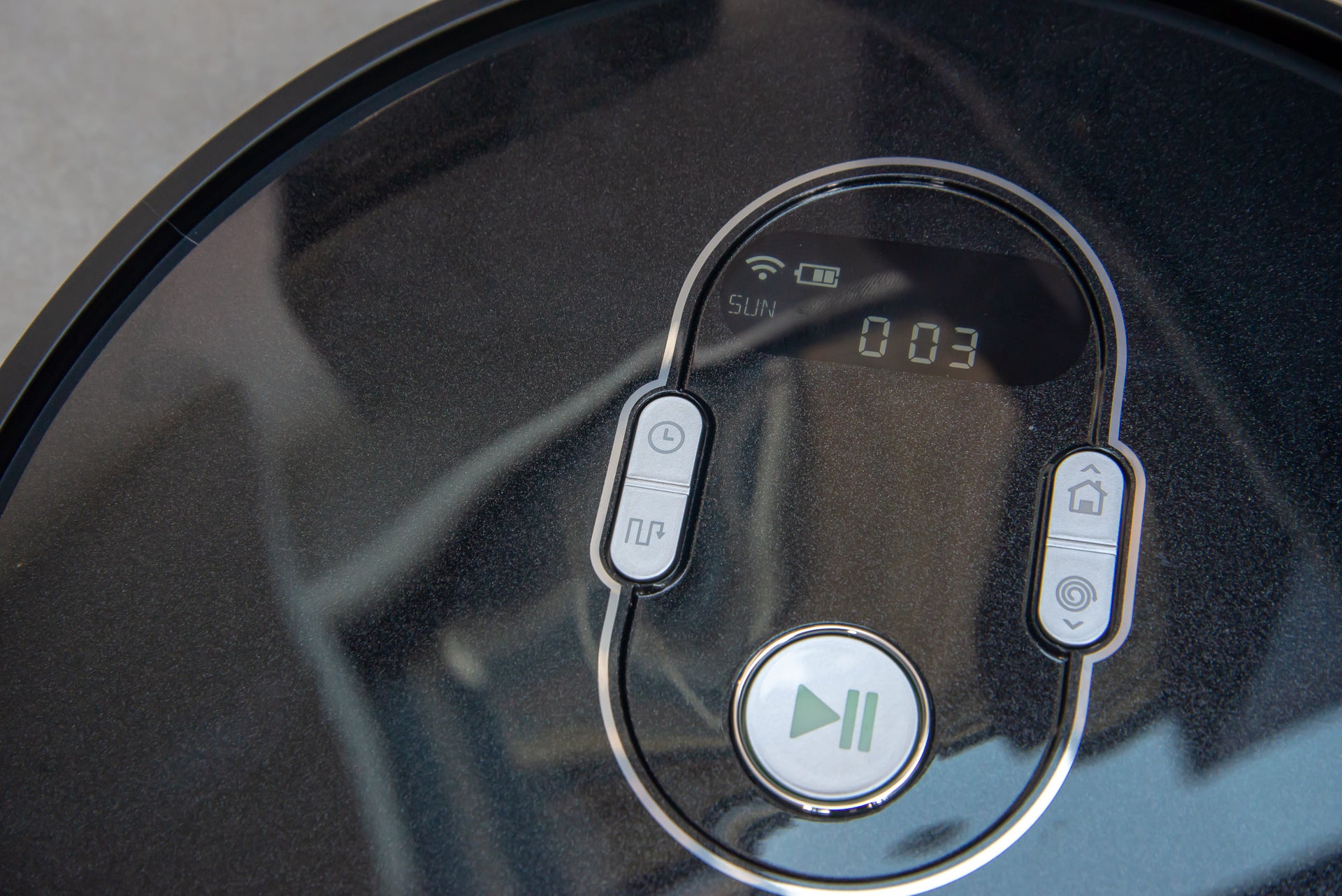 The iLife A7 Robotic Vacuum Cleaner has a charging point on its side that you can plug the supplied power adaptor directly into. Not that you’ll want to do this often, as the supplied charging dock provides a more convenient way of charging, and somewhere for the robot to start from and return to automatically.

The dust bin pops out once you tap the switch, and then hinges open so you can tip the contents into your main bin. Emptying is easy enough, although I recommend holding the dust container inside the bin as you open it to avoid dropping dust everywhere. 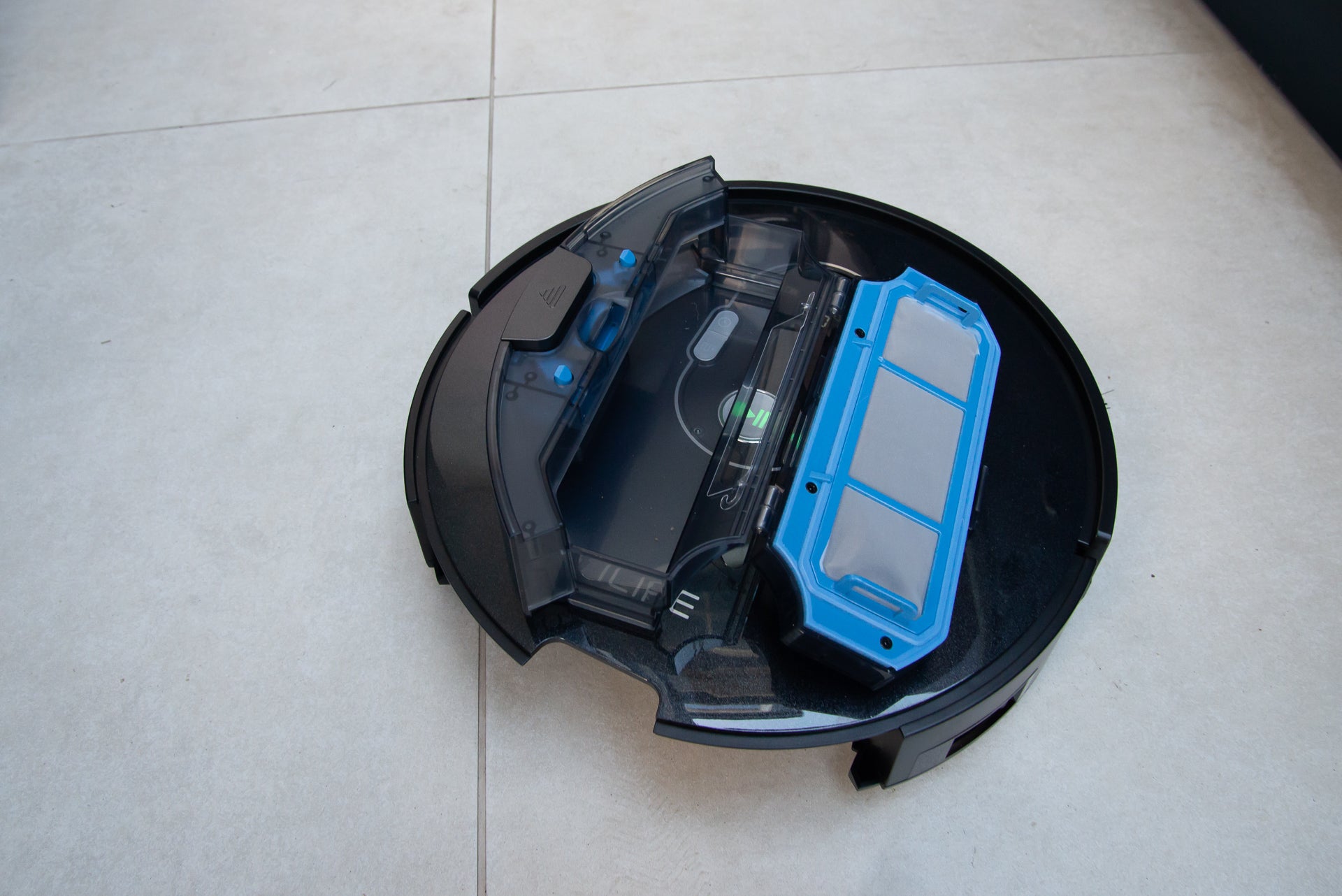 The bin houses the filter, which will need to be changed. It’s a little fiddly to remove, but you shouldn’t have to do it too often: iLife just says that this should be done regularly, but every couple of months should do the job.

Underneath there are the rotating main brush and two side brushes, designed to sweep dust into the main suction path. Both side brushes are needed, as the short brush doesn’t give the vacuum a very wide suction area. Side brushes will need replacing every six months or so. 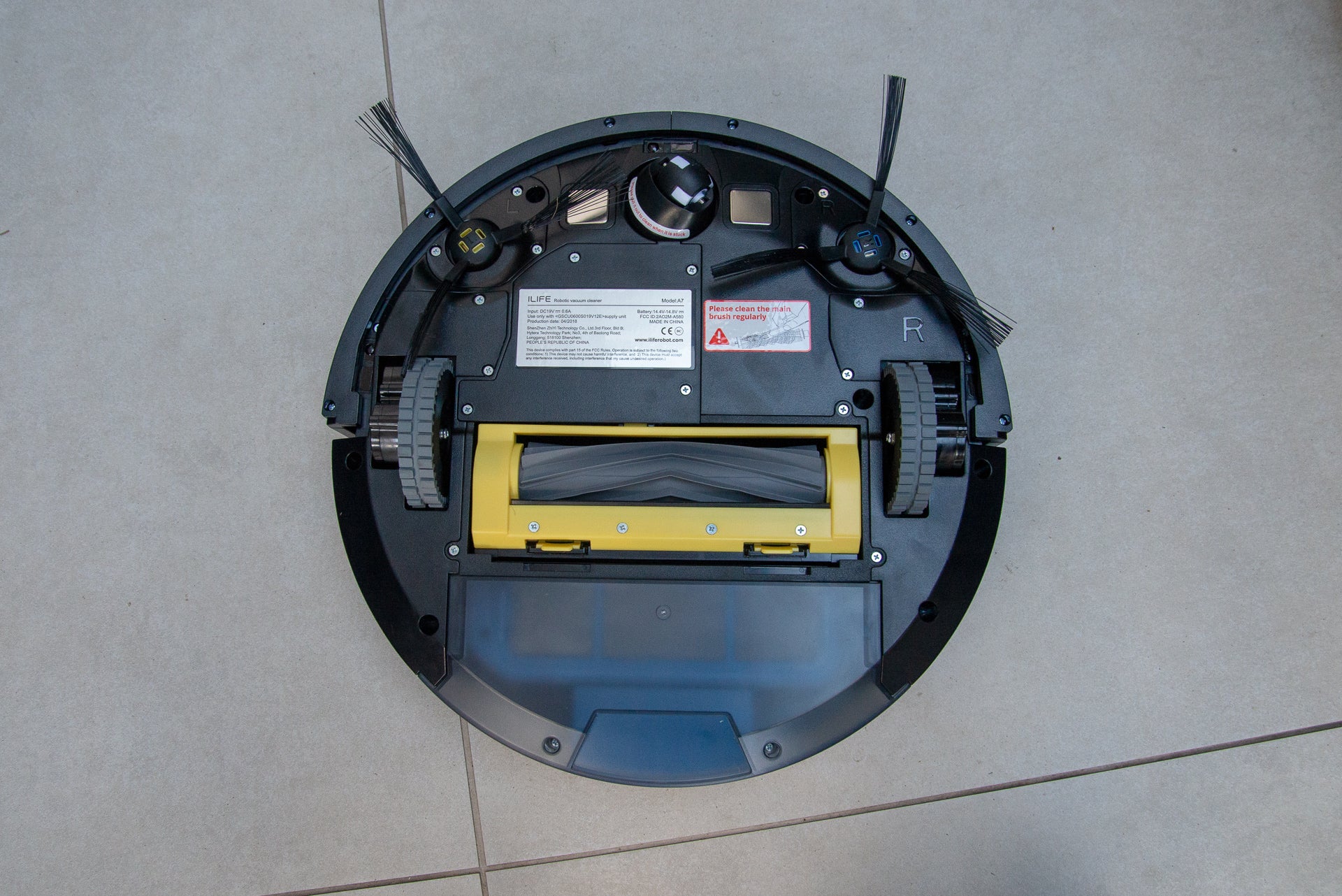 A pack with six filters and four side brushes costs around £20 and should last you around a year. Brushes should also be cleaned regularly using the supplied cleaning brush; hair wrapped around the main brush will need to be cut free using a pair of scissors.

Pre-attached is a rubber brush, but there’s also a harder bristle brush in the box that you can pop in, and should do a better job on the carpet. However, having to switch between the two brushes is often inconvenient, particularly if you want the A7 to clean a mixture of hard floors and carpets. 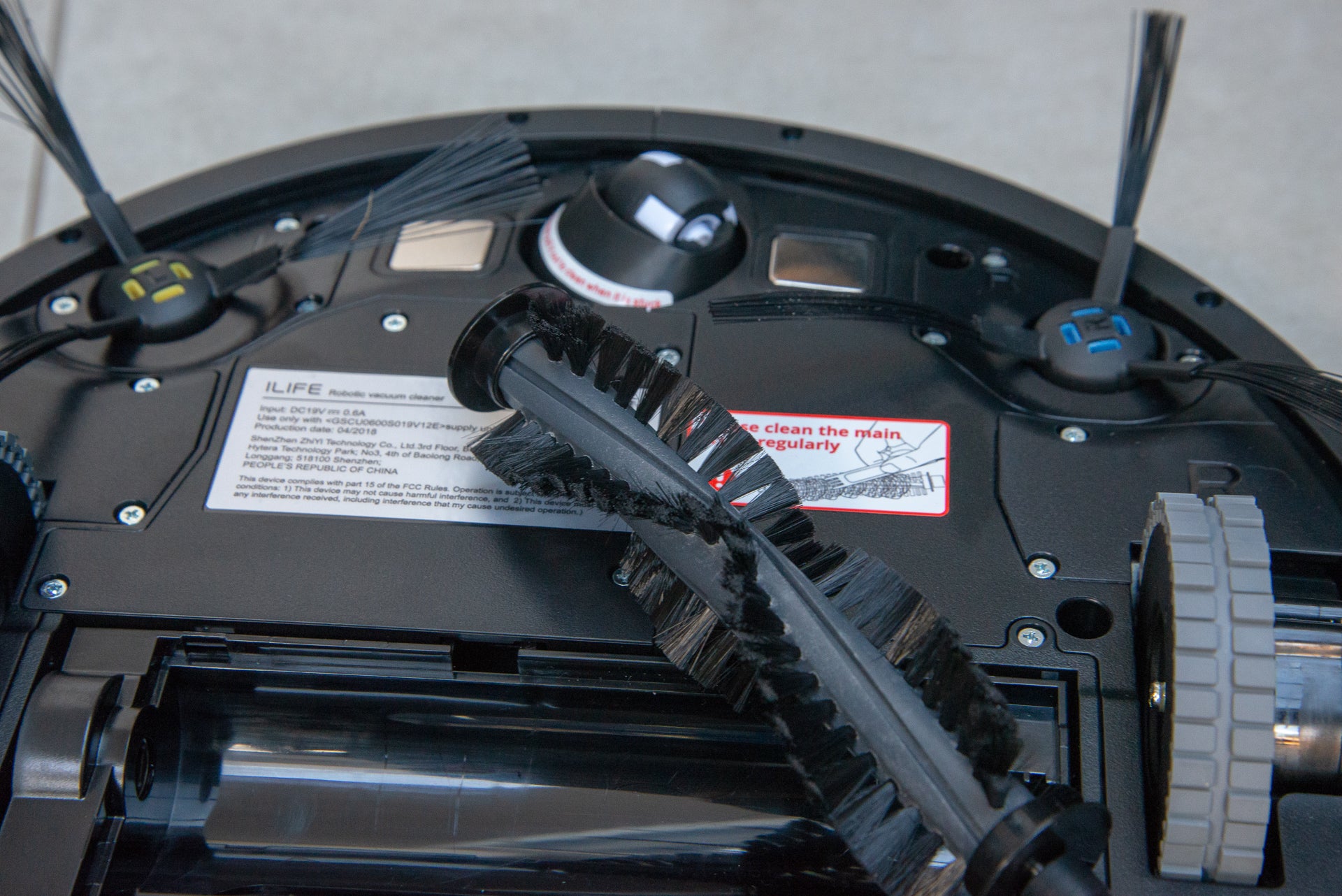 Most robot vacuum cleaners just give you a simple go option, with the robot learning the best path to take.

The iLife A7 Robotic Vacuum Cleaner is rather different. It has several cleaning modes to choose from. Auto mode lets the robot move randomly through your home; path mode zig-zags up; boundary mode gets the robot to find the edges in your home and move around them.

Modes can be selected using the on-body controls or the bundled remote control. They should also be selectable using the iLife app. I say should, because much as I tried, the A7 refused to connect to my phone. I could see from the robot’s LCD screen that it was connected to Wi-Fi, but I got a ‘binding error’ in the app. 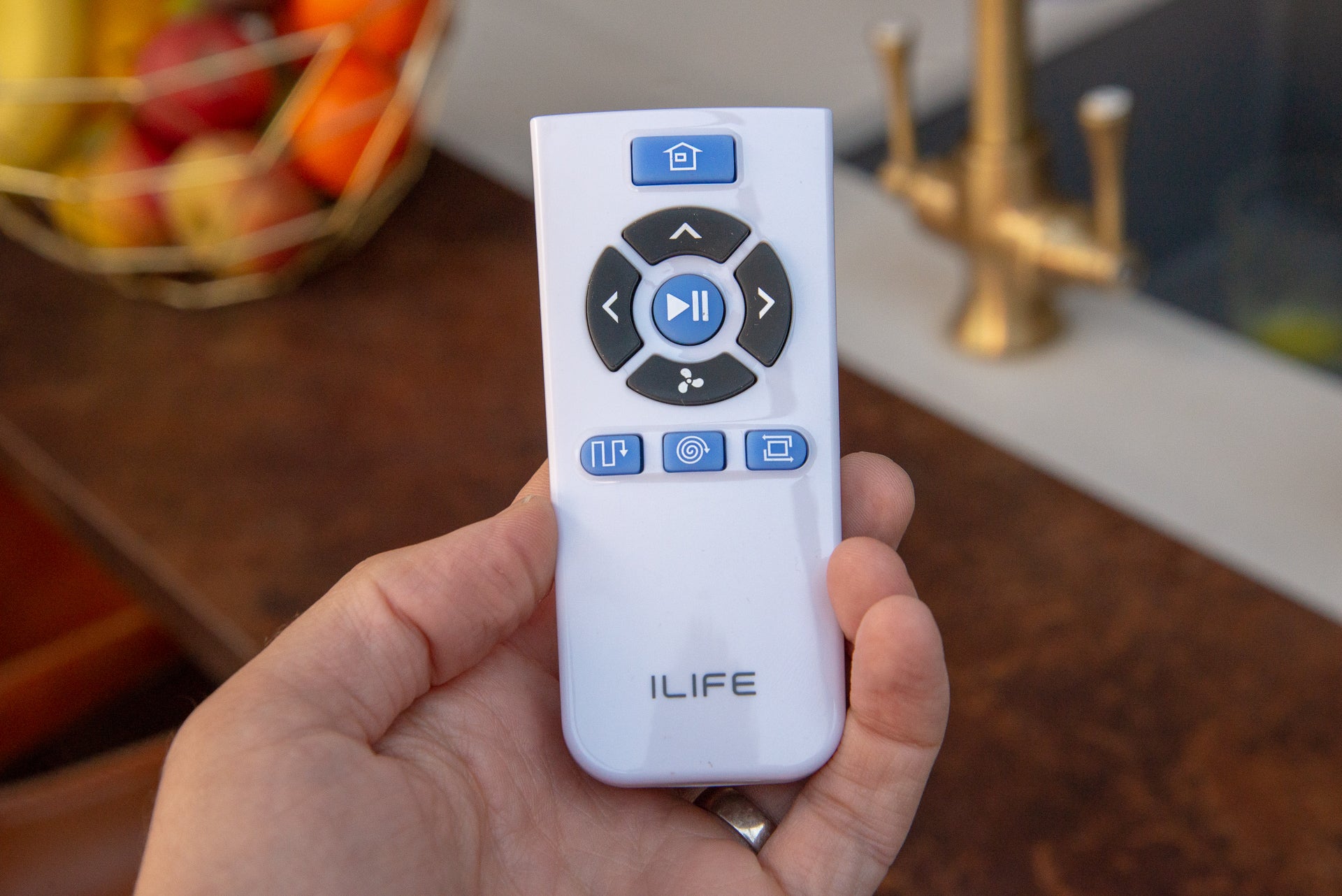 I tried with iOS 12, iOS 11 and an Android phone, and even tried connecting to two different wireless networks, yet the robot just would not connect. Good job, then, for the remote and on-body controls.

With the LCD and controls, you can set a regular cleaning schedule, but it’s fiddly to do so. And be careful with the robot, as if when it runs out of power it forgets its cleaning schedule and you have to start over again.

iLife A7 Robotic Vacuum Cleaner – How well does it clean carpets and hard floors?

Cleaning peformance is a completely mixed bag. Starting with the hard floor test, I put an ‘X’ of mixed flour and carpet freshening powder in the middle of the room and by an edge. Moving around the room, the A7 managed to get a good chunk of the middle spill, although as the photos below attest, there was still a fair amount left. The robot completely missed the dirt on the edge of the room. Starting it again, on high-power mode, the results were similar. 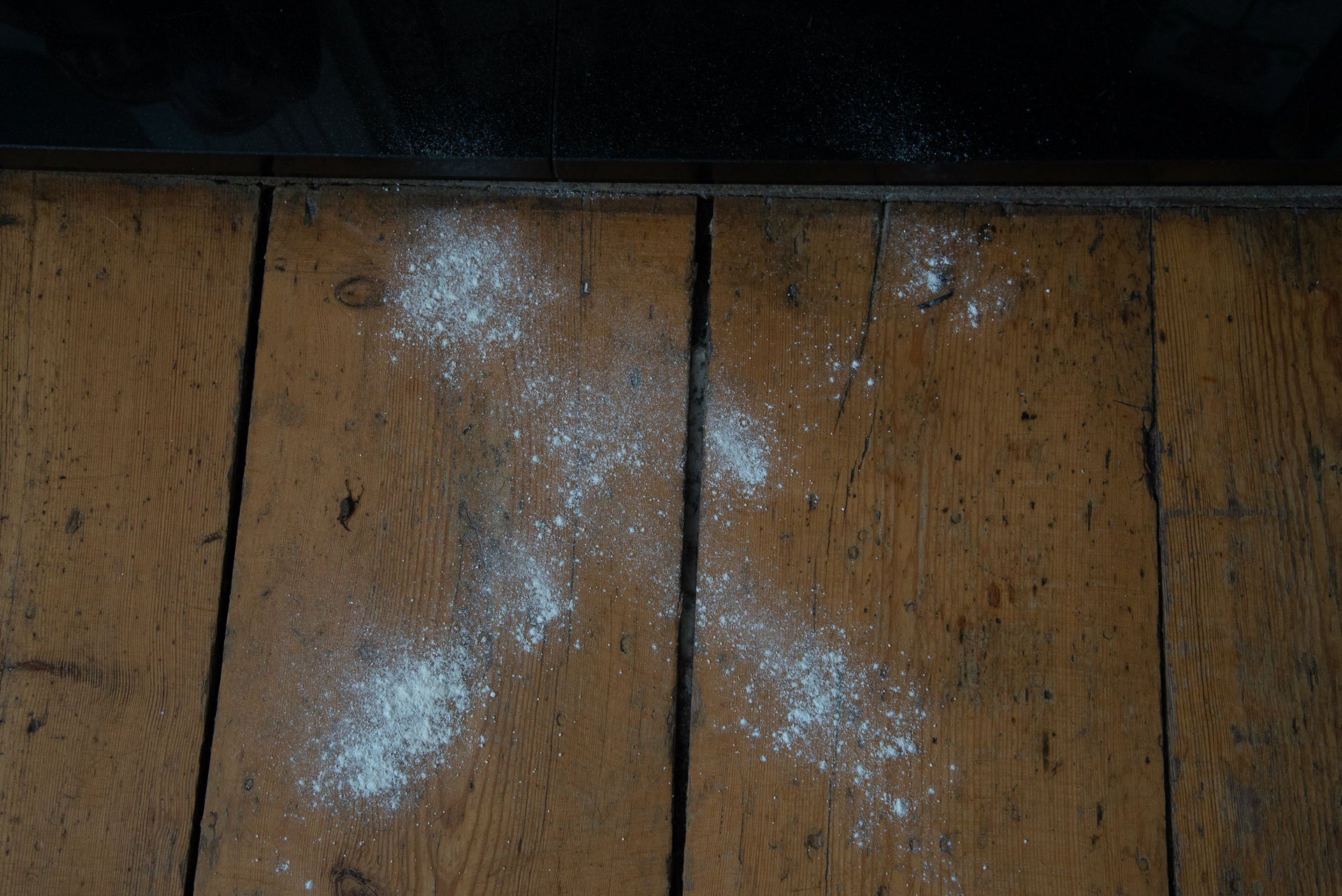 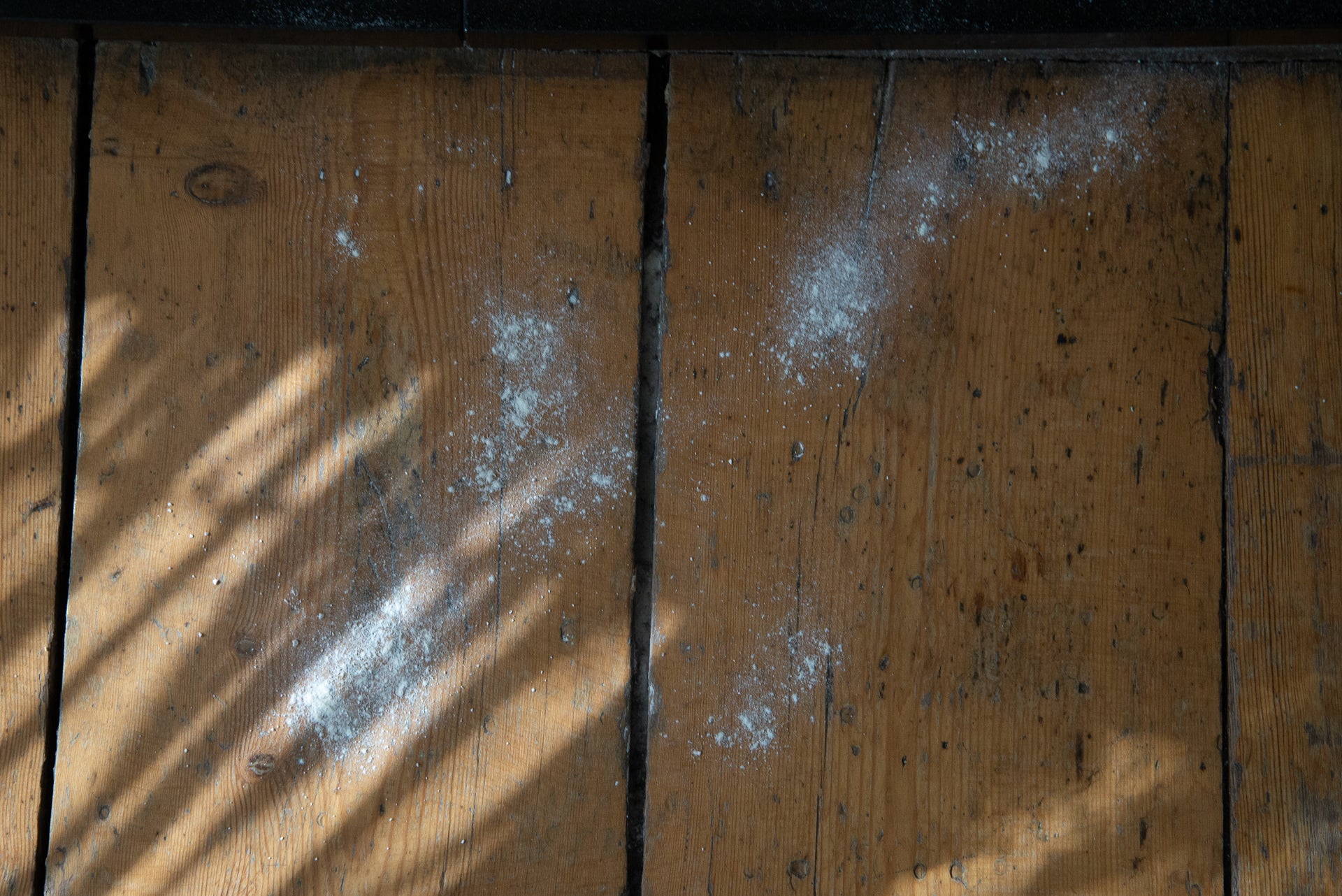 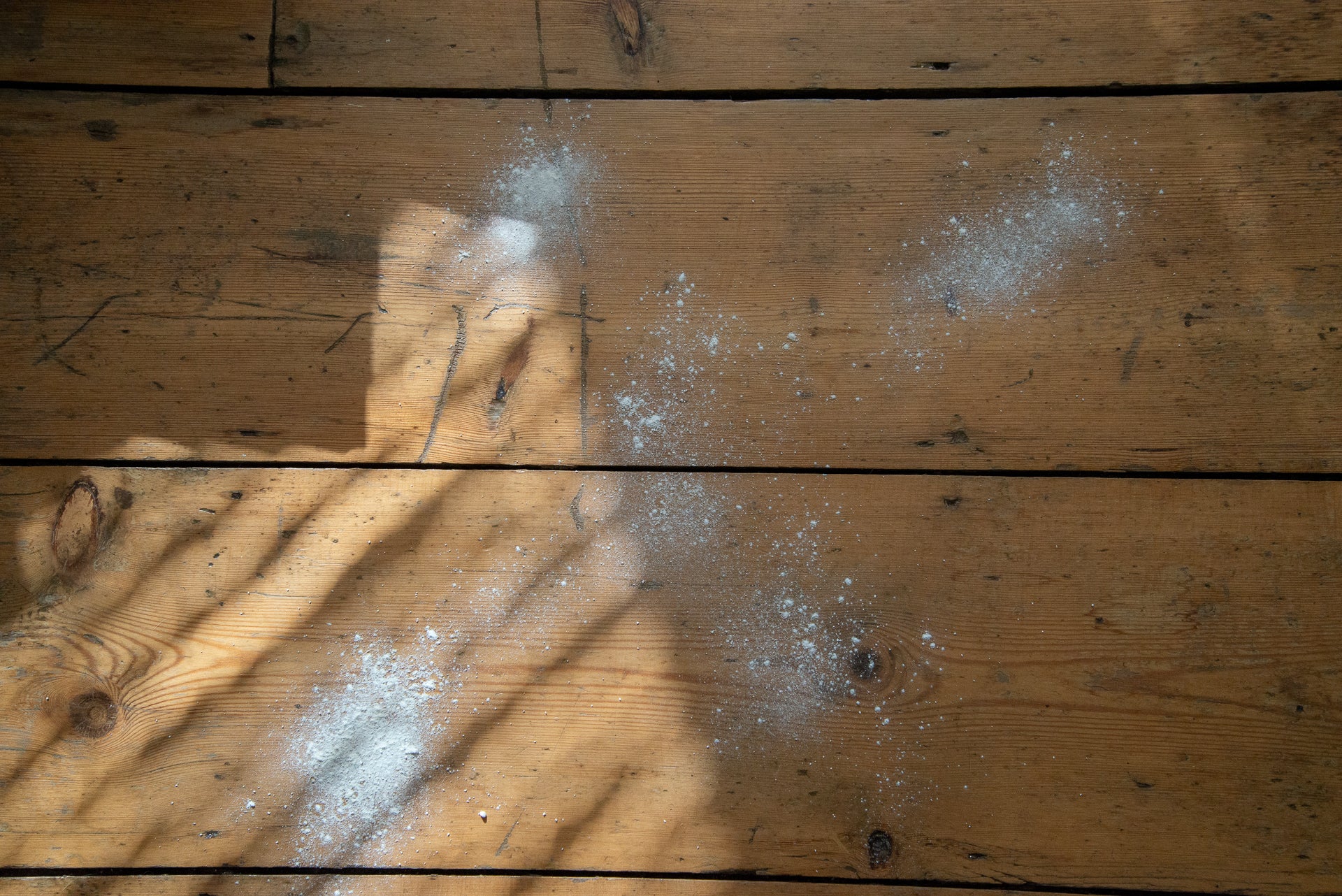 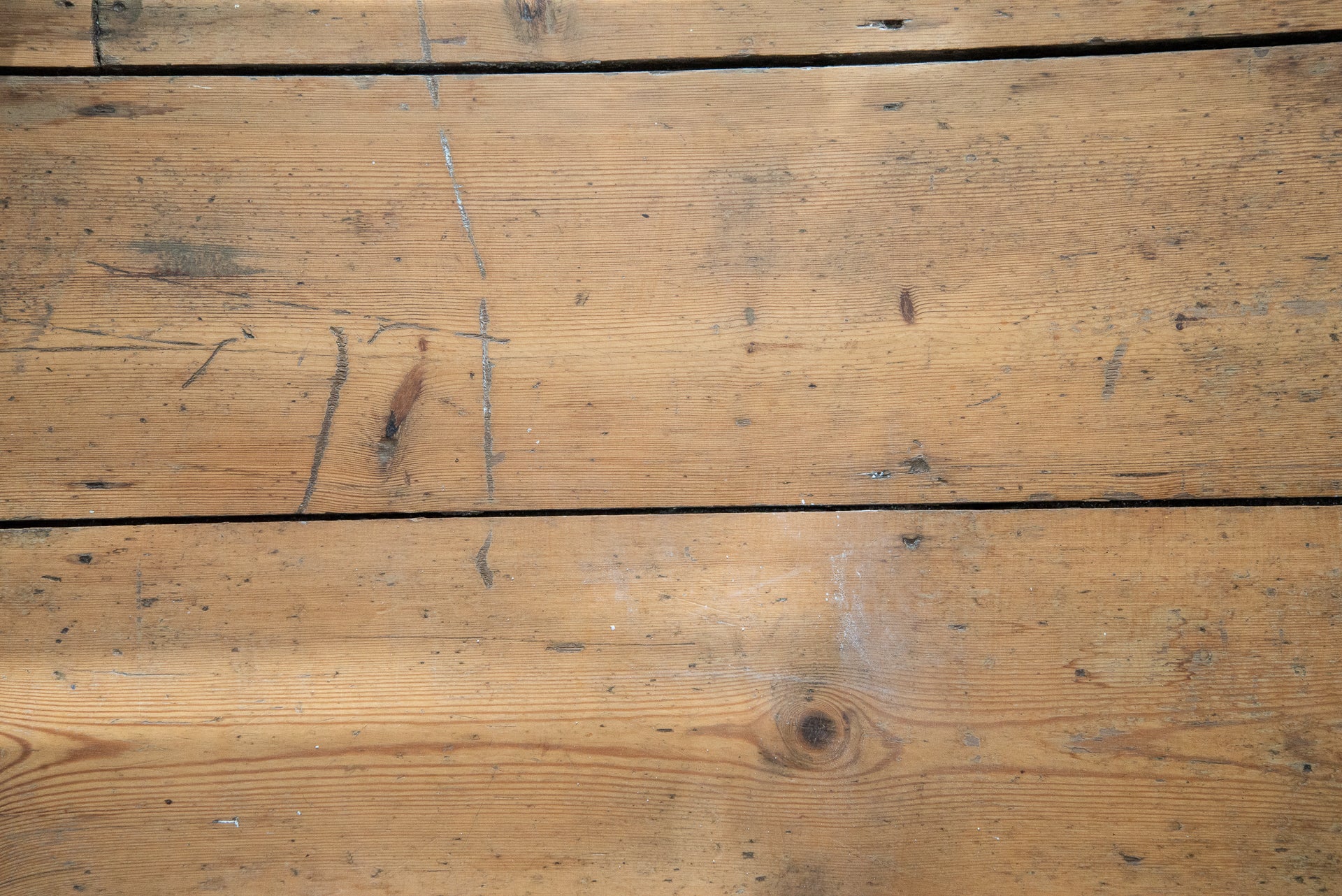 Carpet performance showed similar issues. With an X of the powder placed on a carpet sample in the middle of the room, the robot failed to mount it and didn’t pick anything up. 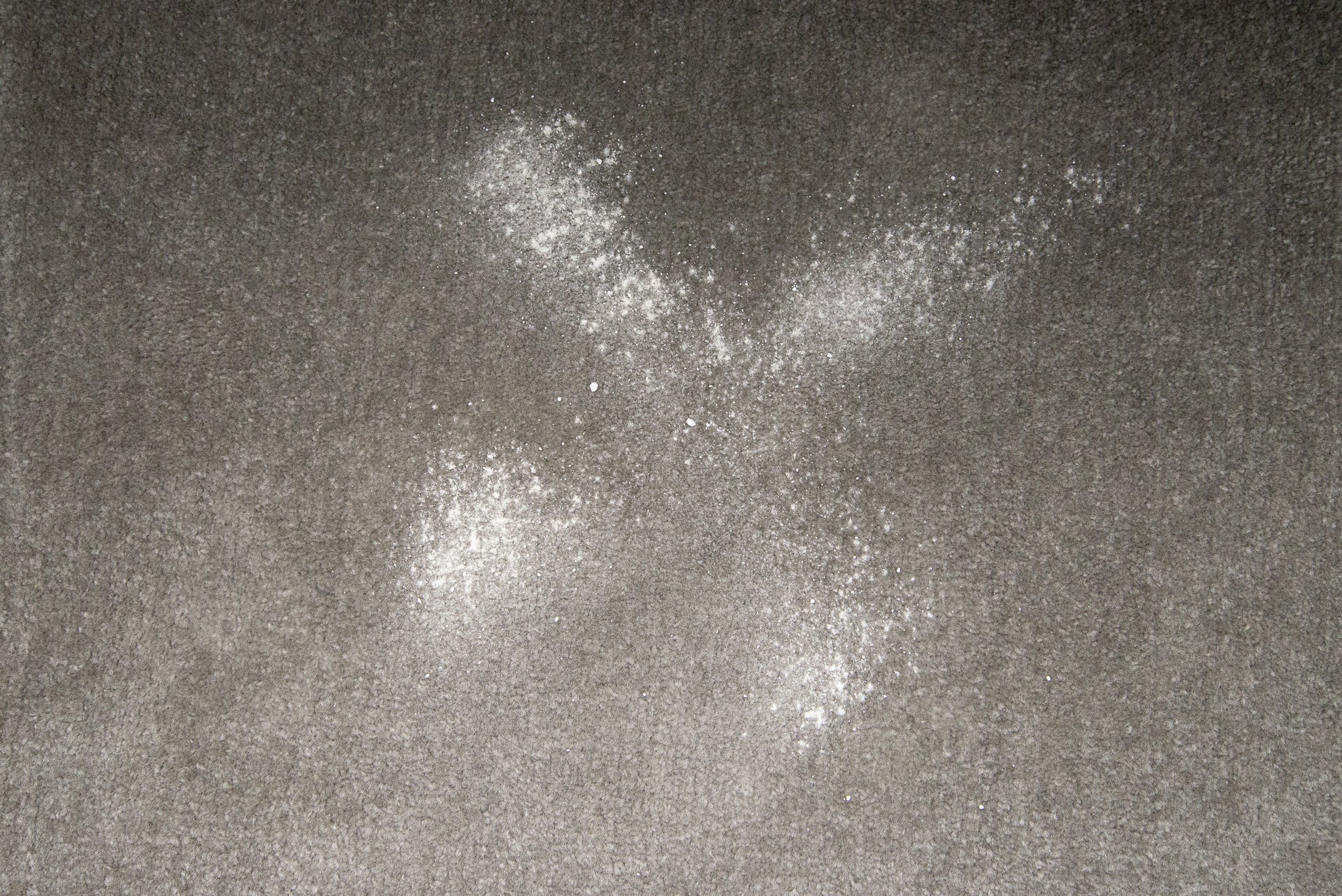 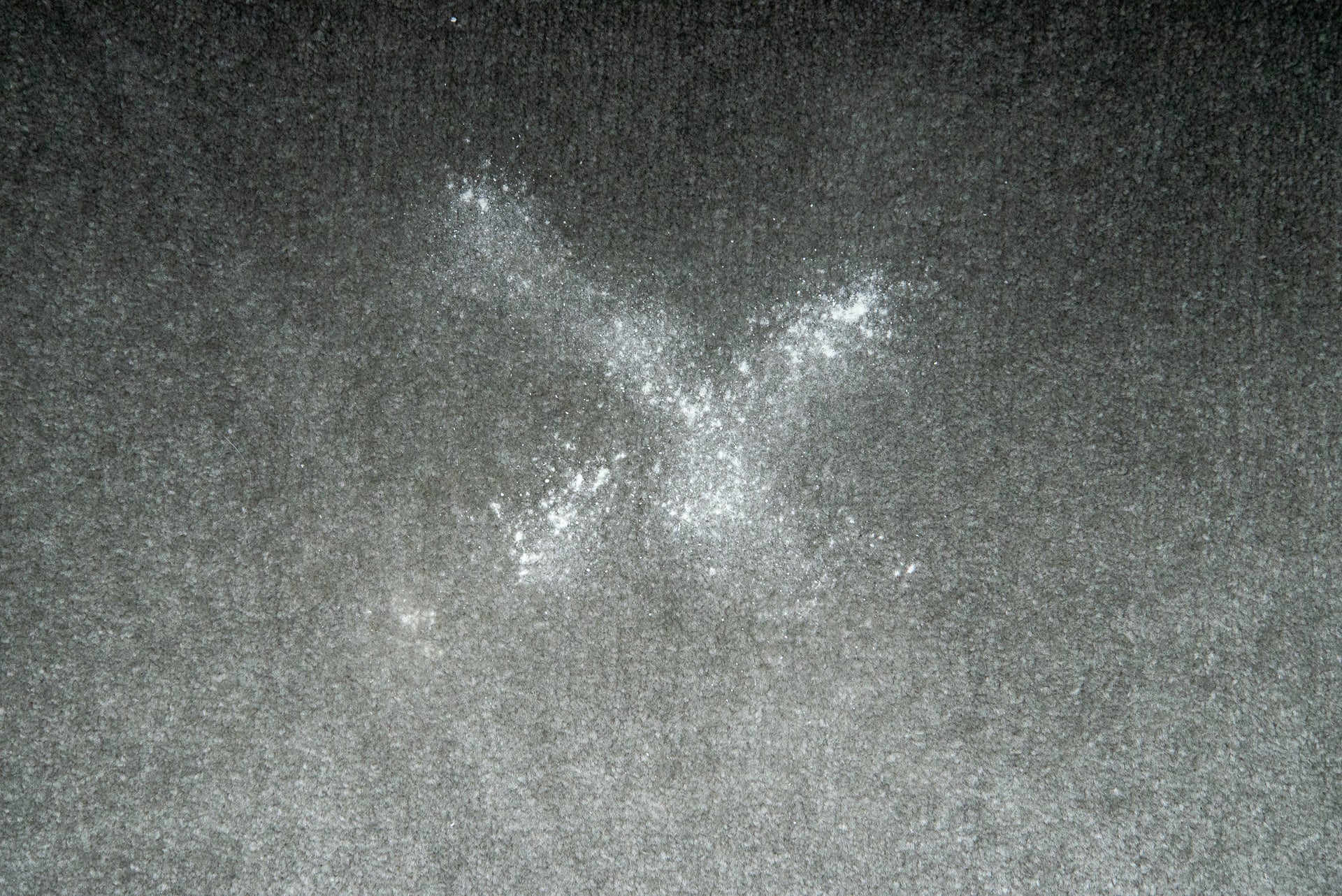 Yet after the robot got caught once and I restarted it from its stuck position, the A7 charged around the room for 45 minutes, and managed to get pretty much all of the dirt. In a 180-square-foot space, that’s a long time for a robot to run, and just shows that the A7 requires a lot longer to even get close to the performance of smarter robots that can do the same job with a single pass.

Run time comes in at up to 150 minutes, with a quoted five-hour recharge time. While the run time is good, my tests showed that I needed this in order to initiate multiple cleans to pick up dirt that other robots would manage on a single pass.

iLife A7 Robotic Vacuum Cleaner – How well does it manage obstacles?

Without any smart mapping or laser navigation, the iLife A7 Robotic Vacuum Cleaner is rather more basic in the way it moves around. The robot tends to charge forwards, hit something, and then bounce off in a random direction until the entire space has been covered.

This kind of navigation isn’t particularly smart, and on several occasions the A7 managed to get itself trapped under a sofa, bouncing backwards and forwards between the legs and a side table. It needed rescuing more than once, and on one occasion after restarting the robot it kept running and running, going around the same room for 45 minutes before I finally stopped it.

The iLife A7 Robotic Vacuum Cleaner also struggled with rugs, with the side brushes getting caught underneath so that the robot pushed it along. All robot vacuum cleaners require some degree of furniture management to run properly, but even so, I found the A7 was more likely to get stuck than other products. 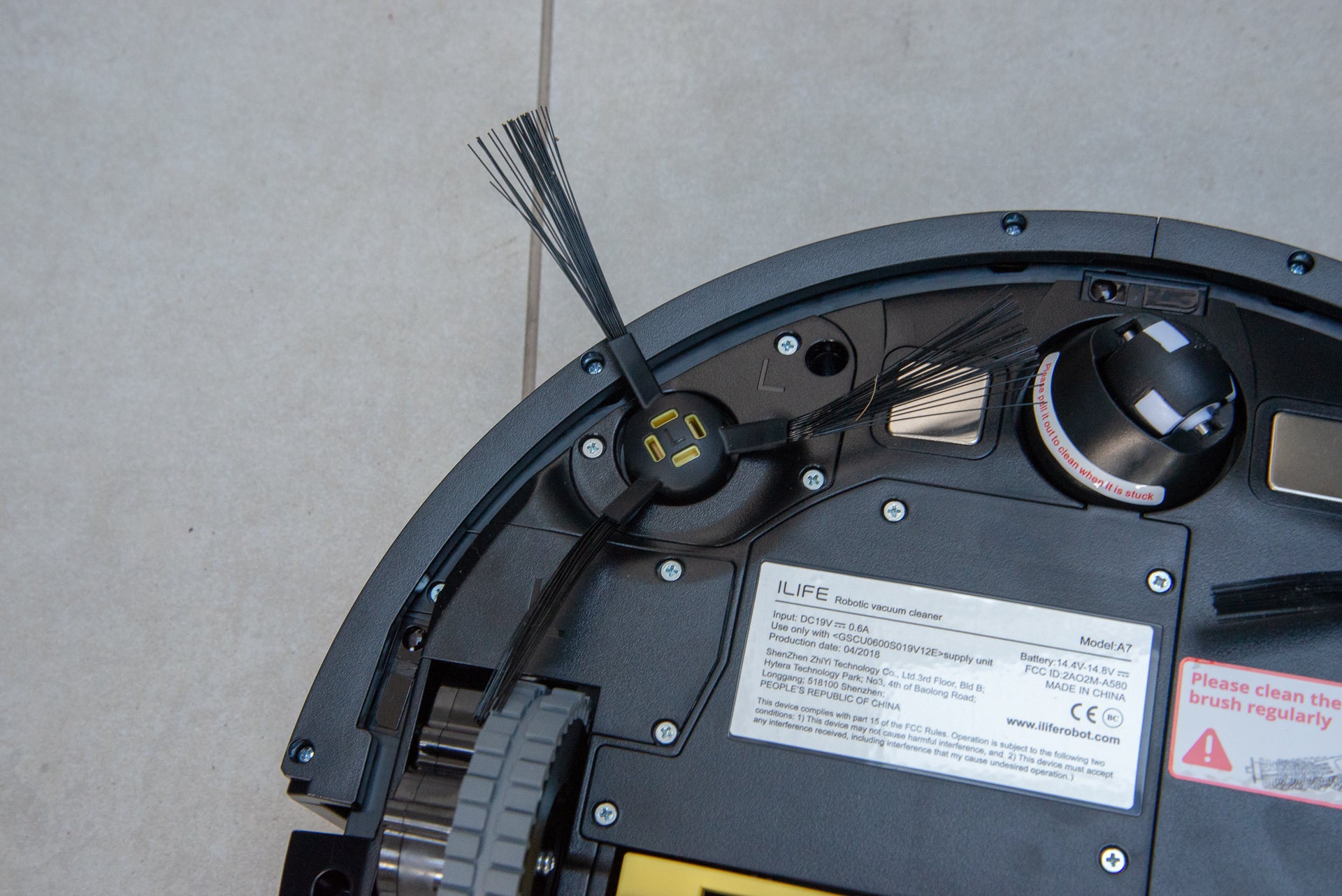 Fall management works well, though, and the A7 correctly discovered the step into the kitchen and reversed before it plunged down.

Finding the charging dock is a bit of a challenge, too, with the robot moving around a lot before finally finding where it started from and easing itself onto the dock.

On normal power, I registered the iLife A7 Robotic Vacuum Cleaner at 55.3dB, which is very quiet. Certainly, you can hold a conversation or talk on the phone while the robot is running. On turbo mode, sound increases to 63.1dB, which still isn’t too loud. But you’d probably accept a little more noise if it meant greater suction power.

Why buy the iLife A7 Robotic Vacuum Cleaner?

The price of the iLife A7 Robotic Vacuum Cleaner is enough to make it attractive. And people with uncomplicated layouts, with time to let the robot charge around for a good while, may find that it does a good enough job.

The poor navigation and number of times that the cleaner got stuck, mixed in with the app failing to work, do detract heavily. Spend some more and you get to the Neato Botvac D4 Connected, which is far more advanced and did a better job in my cleaning tests.

A very cheap robot vacuum cleaner, the poor navigation and app not working limit its appeal.