Like its hotdogs and flat-pack furniture, Ikea’s first Bluetooth speakers are affordable and surprisingly good.

Our favourite supplier of meatballs and flat-pack furniture has on the odd occasion taken curious steps into tech. First we had wireless charging, after which came smart lighting. Now we have the Ikea Eneby, a range of Bluetooth speakers.

Two models make up the range: the portable Ikea Eneby 20 at £45; and the larger Ikea Eneby 30 at £80. This review will cover the key differences between the two units and why you might prefer one over the other.

If you’re technologically inclined and already have a fixed idea about what a Bluetooth speaker should be, this isn’t for you. But perhaps you’re already in an Ikea store, sat in one of those comfy chairs. You may not be particularly fussed about tech, and are wondering whether you should add an Eneby to your misshapen yellow shopping bag.

More the latter? Then you are target audience. The Ikea Eneby speakers may be functionally basic but they perform well for the money. And if you’re into Ikea’s aesthetics, then they’ll be right up your street.

Both are square-faced, straight-edged and unashamedly boxy. There’s been no attempt to create the rounded, cylinder-like shapes that have become prevalent in the Bluetooth speaker market.

My DT teacher from the early 2000s hated boxy design, but I’m of the opinion that it’s about the right time and place. The functional look of the Eneby speakers is entirely in line with contemporary trends – and, in any case, these speakers were designed with the Ikea Kallax and Eket shelving units in mind. 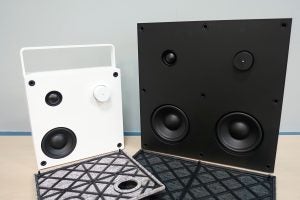 The fabric grille helps to blur the lines between machine and furniture, but it is removable if you prefer a more industrial vibe.

Each has a 1-inch soft dome tweeter for high frequencies, plus a reflex port at the rear for more efficient bass. The Eneby 20 uses a single 3.2-inch woofer for mid-bass frequencies, while the Eneby 30 has twin 4-inch woofers.

The speakers use Bluetooth 4.2 and have a range of 8-10 metres. They also have 3.5mm headphone jacks for wired input, for those who don’t use the latest iPhones.

Control is via a single multi-function knob, which handles power, pairing, volume and EQ adjustment. Sadly, there are no buttons to skip tracks. It takes a little fiddling to figure out exactly how to do those different things, but the instruction booklet is clear and there’s a little LED to help identify what you’re doing.

For example, holding down the knob for three seconds lets you go into bass level control, as indicated by a slowly blinking LED. Pressing it again takes you into treble control, with faster blinking. 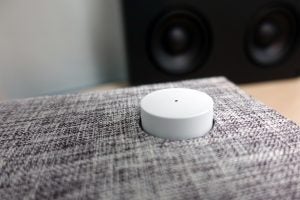 Both speakers are powered directly from the mains with a standard figure-of-eight cable – yay, no power brick! The Eneby 20, being the portable option, can be fitted with a battery pack. This sells separately for £15 and lasts 8-10 hours at 50% volume. Don’t worry about leaving the speaker on and draining the power – an auto-standby feature kicks in after 20 minutes.

The Eneby 30’s reflex port doubles up as a handle, although the unit itself is big enough that you’re unlikely to move it much anyway. The Eneby 20 comes with an optional handle, plus a tiny hex key for attaching it, which makes setting it up a more typical Ikea experience.

Even with the handle, the Eneby 20’s size and shape suggests you’ll probably be moving this to and from the garden, as opposed to taking it out and about to the park. 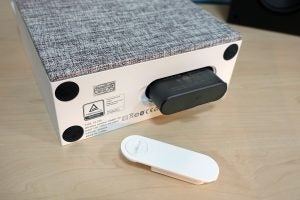 The battery pack, sold separately for £15

For the money, the Eneby speakers are better than they have any right to be. Performance isn’t far off units such as the UE Blast, which costs a lot more.

The two versions sound different, but share some similarities. Both offer plenty of power, for instance. You can happily turn them up loud without fear of distortion . They also sound much bigger than their dimensions would suggest. If you’re planning a house party and need room-filling sound for cheap, these will do nicely.

These are mono speakers, which means there’s no stereo effect; you don’t get separate left and right channels of audio. This isn’t a problem, though – plenty of speakers at this price are mono designs. Just don’t expect much in the way of directionality and steering.

Unlike the UE Blast, there’s also no way to link two speakers together to manually create a stereo performance. Given the app complexities involved and the low cost of these speakers, I can see why Ikea didn’t bother. 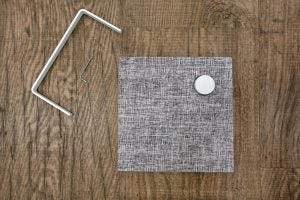 Both speakers are capable of plenty of bass, far more than the average speaker at this price range. I might expect that from the Eneby 30, with its twin woofers, but the Eneby 20 definitely punches above its weight.

That’s partly because speakers at this price tend to be smaller, more pocketable – Ikea has opted for larger cabinets, which really help in the low-end department. Bass quality is pretty good, too. It’s well controlled – taut, rather than heavy and slushy. Bass extension is also impressive.

The overall sound signature is a little bass-forward, and the mid-range feels slightly recessed, but it isn’t a huge problem since vocals still have enough of a presence.

If you’re going to be putting the speakers in a shelving unit or up close to a wall, I’d recommend tweaking the EQ to avoid overwhelming the rest of the frequency range. 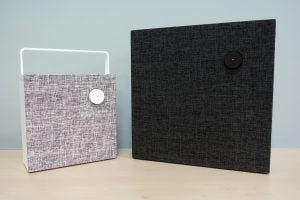 To an extent, you get what you pay for. The Eneby 30 is the superior speaker, but the difference is in line with the price gap. The Eneby 30 offers more power, plus greater dynamic reach. It can hit harder, and it can hit lows that the Eneby 20 can’t.

The Eneby 30’s construction is also more solid, or better internally braced – I occasionally heard the Eneby 20’s cabinet rattle slightly, if I put on a particularly bass-demanding track.

It comes down to having the right speaker for the right room. For smaller rooms – kitchens and bedrooms, for example – the Eneby 20 will do just fine. If you want a speaker for the living room, however, we’d opt for the larger model. 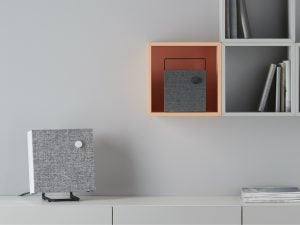 Well, this was a surprise. A company with no prior experience in the audio market has come up with a surprisingly compelling product that can easily take the fight to similarly priced rivals. These speakers won’t appeal to serious audiophiles, but if you just want some music with your shelves and you’re not fussy about the latest tech, you won’t be disappointed.

Like its hotdogs and flat-pack furniture, Ikea’s first Bluetooth speakers are affordable and surprisingly good.