I say ‘Ikaruga’ to ninety per cent of you, and you’ll either think I’ve regressed thirty-odd years or that I’ve had something disagreeable for lunch. The other ten per cent, however, will realise that I’m speaking of a legend – possibly the last great traditional 2D shoot-em-up to see release, and one of the finest games to emerge from Japan’s least predictable game developer, Treasure. Released first on the Dreamcast, then on the GameCube, it’s a game that more gamers will have heard of than actually played. No longer. For a mere £7 a near-perfect 360 conversion is yours to download from Xbox Live Arcade. 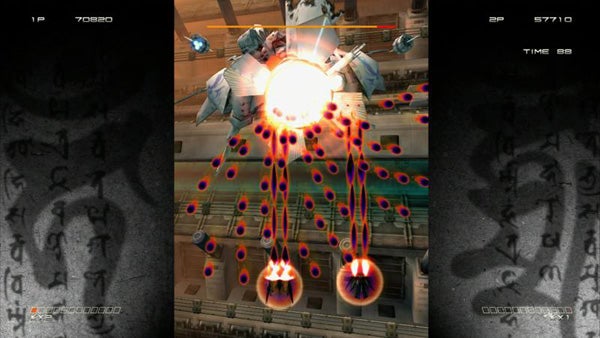 Why, you might wonder, is something that looks like just another vertical scrolling shoot-em-up so revered? After all, nobody gets so poncey when they namecheck Xenon 2: The Megablast? Well, it’s partly a question of clever game mechanics, and partly a question of presentation. Ikaruga belongs vaguely to the manic school of vertical scrollers, packing the screen with enemies, objects and bullets and placing a heavy emphasis on recognising and dodging bullet patterns. However, where it differs from similar games is in the way it uses a concept of polarity. Basically, every enemy, every bullet and many objects are coloured either black or white. Your ship can switch between the two colours at the touch of a button, dealing out more damage to black ships and absorbing white bullets while white, blasting white ships better and absorbing black bullets when black. By switching colour, you instantly change which objects on the screen pose a threat and which do not, and affect you’re ability to destroy them. What’s more, bullets absorbed can be stored to power up a smart bomb, giving you additional firepower just when you need it most. 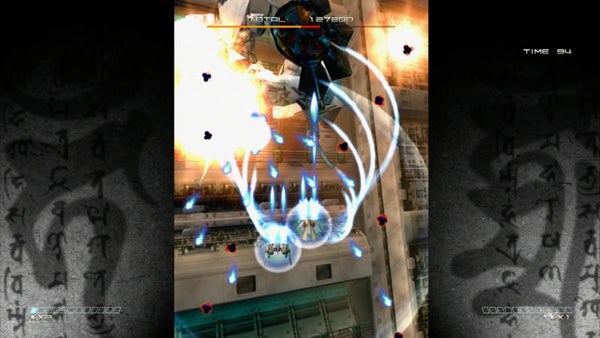 It’s a clever idea, but the genius is in the way Treasure exploits it. Where other scrolling shooters work your reflexes, Ikaruga works your brain with each level, when you break it down, amounting to a series of puzzles that ask you to recognise the pattern, work out the optimum places at which to switch polarity and navigate a route through obstacles, ship-splitting power beams and monolithic enemy craft – all the while dodging harmful bullets and blasting enemies like your life depends on it.

There’s no getting around the fact that Ikaruga is immensely challenging. By default, the game gives you three lives, normal difficulty level and no – I repeat, no – continues, but if you’re just starting off, forget it. Go to the options menu, switch continues on and up the lives to five and you might just see the end of Level 2 on your third or fourth attempt. Leave the default settings, which are a necessity if you want a place on the leaderboards, until you’ve got to grips with the game and the levels. 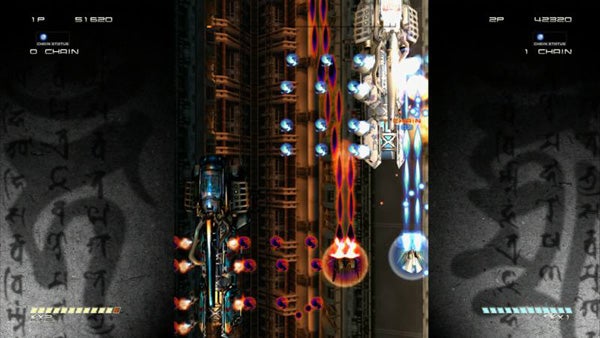 Tricky spots are everywhere. How do you tackle the tight corridors and shifting, beam-firing blocks at the start of Level 3? How on earth can you destroy the ship that’s spitting out simultaneous black and white arcs of pure destruction? Is it really possible to defeat that boss? Always, Ikaruga seems to be asking the impossible, but eventually – or after checking out an FAQ – you’ll discover that the impossible is just about possible if you take it from a new perspective. Ikaruga is punishing, but it’s not actually unfair. Like many scrolling shooters it needs precision and a memory for waves and patterns, but even the toughest obstacles can be overcome. To help, there’s no need to play it all on one go. You can select any level you’ve already played from the game setup screen, crack it, then go back to the full game and apply what you have learnt. 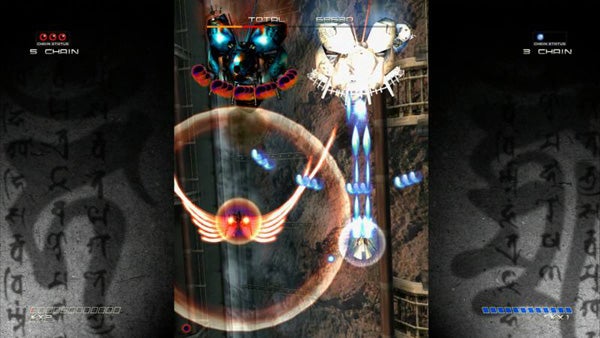 But why go to all this effort? Because the experience is still as thrilling as it ever was. Built for the Dreamcast, Ikaruga is one of the most beautiful shoot-em-ups ever, benefitting from a clean, anime-influenced aesthetic and a remarkably coherent style. Background visuals and enemy design are amongst the best the genre has ever thrown up. The music and sound effects are awesome, and the eye candy provided by the set-piece boss battles and beam effects quite delicious. Play it on a big screen, whack up the volume and Ikaruga is everything that great games used to be: loud, bombastic, colourful and relentless.

The huge bars on each side of the screen might put you off, but don’t let them. You’ll soon forget all about them – along with the world outside – and if you’re really keen you can rotate your screen physically by 90 degrees and set up the game’s display to match. Meanwhile, remember that size isn’t all important. Ikaruga may not be huge, but you can easily sink more time into its five levels than you would into today’s average FPS, and it’s addictive enough that you’ll want to. The whole polarity thing also makes it a natural for two-player co-op action, so thank goodness Treasure made it a feature. 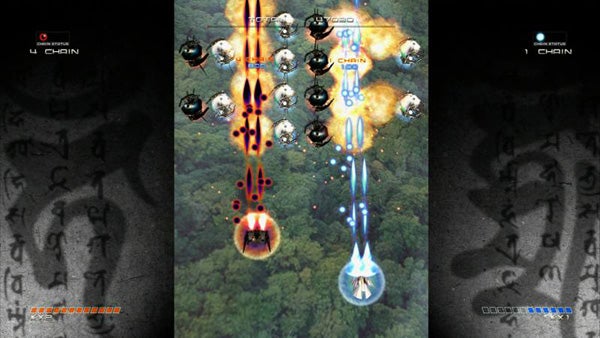 Despite all this praise, I’ll admit that the game has got a weakness. It’s so demanding and asks you to be so precise in your timing and execution that you never quite get the zen-like feeling of mastery that you may achieve in other scrolling shooters. You’re always thinking, always optimising your play and trying to work out the next bit, and because of this there’s not quite as much ‘flow’ as there is in other, even lesser titles. Even on its easiest settings, Ikaruga is about dedication and continual self-improvement – concepts that sit well with the philosophical underpinnings promoted by the in-game title screens, but concepts that might not sit so well with every gamer. To get anywhere on the harder settings you’ll need godlike gaming skills and an unbreakable will to succeed. 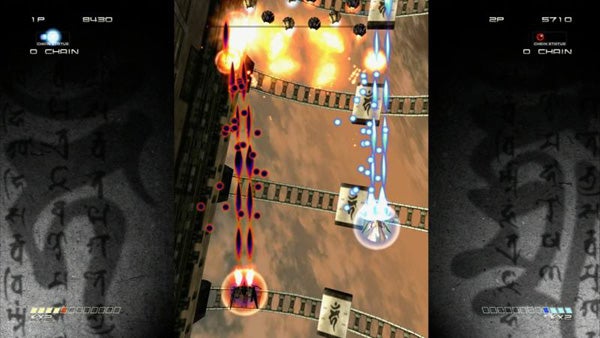 That said, every red-blooded gamer owes it to themselves to give this game a try. Where most scrolling shooters get by on the warm fuzz of retro nostalgia, there’s something hard-edged and modern about Ikaruga that practically demands your respect. You might like it, you might not, but given the low asking price you should find out – and soon.


The last of the legendary scrolling shooters is an Xbox Live Arcade must. The emphasis on precision over seat-of-the-pants style might not be to everyone’s taste, but Ikaruga is one of the genre’s very best.