Considering what a sales impact the words ‘Full HD’ have gained it’s not surprising how quickly 1,920 x 1,080 has worked its way into being the standard resolution for 22in monitors. Only a few short months ago when we looked at Iiyama’s ProLite E2208HDS, this was still something worth getting excited about, but now there’s no lack of competition, meaning the E2209HDS will have its work cut out for it. 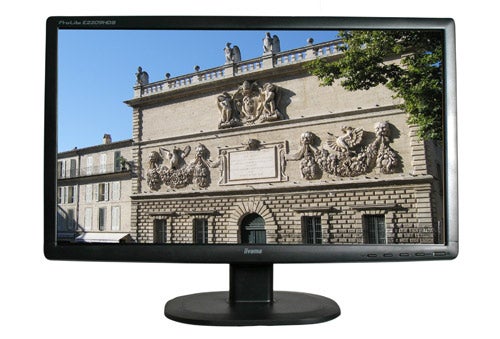 As usual for monitors at this price point, Iiyama’s latest features the click-base-into-stand design, making assembly a doddle. Adjustability suffers though, with only limited tilt to alleviate ergonomic concerns. We can hardly fault Iiyama for this since it’s a problem with most budget displays, but the BenQ G2200WT has shown how it could and should be done. At least (unlike BenQ) Iiyama includes a DVI cable.


In terms of design, the E2209HDS is very similar to its cheaper cousin, which is a pity since the E2208HDS wasn’t the most attractive of monitors to begin with. Thankfully the matte finish has been retained, meaning that though it might not look as flashy as some, this display should be able to stand a bit more wear and tear. Plastics feel solid throughout and despite a hint of creak overall build quality is good.

However, there are a few points which make this monitor one of the least attractive 22in models we’ve come across. First is the slight bulge on the lower part of the bezel. It’s only a difference of a few millimetres, but because it’s so slight it just looks wrong. Iiyama would have been better off making it a little wider and straight, or giving it a more defined curve a la Viewsonic’s VX2260wm.


The second faux pas concerns the way the lower part of the bezel seems to be ‘tacked-on’ to the rest of the monitor – you can clearly see two seams at the bottom of the left and right parts of the bezel where it joins the rest of the chassis. The clunky control buttons plainly visible along the front edge and the bean-shaped blue LED don’t help matters much either.

So with similar ergonomics and worse looks, what justifies the E2209HDS’ higher price over the older model? Well, in addition to the VGA and DVI ports found on the E2208HDS, this display adds HDMI. To be honest though, triple video inputs are no longer the luxury they once were, and most similarly-specified monitors offer them. 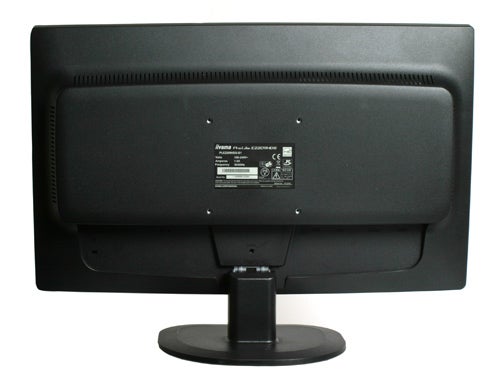 There are 3.5mm inputs and outputs present too, so you don’t have to rely on the E2209HDS’ built-in speakers – and that’s a good thing, since the efforts on this monitor are particularly poor. If it hadn’t been for the relatively impressive set found on the recently-reviewed Asus VW246H we might have been more inclined to forgive the pathetically weak volume, lack of any clarity or depth and tinny bass. Admittedly the VW246H is a 24in monitor, but even by the usual 22in standards these speakers don’t hold up well.


Of course a monitor isn’t really about audio quality, so let’s see how it does on the visual side of things. Initial impressions here were rather poor here too, since there is noticeable contrast shift with even subtle horizontal adjustments. Conversely, vertical viewing angles are strong for a TN, and from the ideal angle the E2209HDS delivered a decent greyscale performance. Just a hint of backlight-bleed along the bottom edge affects an otherwise even backlight distribution, but both banding and dithering are minimal.

Out of the selection of image presets (which include Text, Internet, Game, Movie, Sports and Standard modes) only Standard allows you to adjust brightness, contrast and colour temperatures and should be the one to use for any entertainment material. Advanced Contrast Ratio (Iiyama’s dynamic contrast system) is turned off by default in all modes – a good thing since turning it on costs you too much dark detail to be worthwhile.

As far as aspect controls go, Iiyama offers you the choice between ‘Full’ and ‘Aspect’. The former stretches and distorts contents to fill the whole screen, while the latter stretches it only as much as it can without causing distortion. So there’s no 1:1 mode, but then on a native 16:9 screen that’s not really a necessity anyway.


Overall then, image quality is middling, which to be fair can be applied to most monitors using TN panels. So the important question becomes how the E2209HDS holds up in the value stakes. Available at just over £160, this is a decent price for a Full HD 22in monitor, but some of the competition can be had for less. 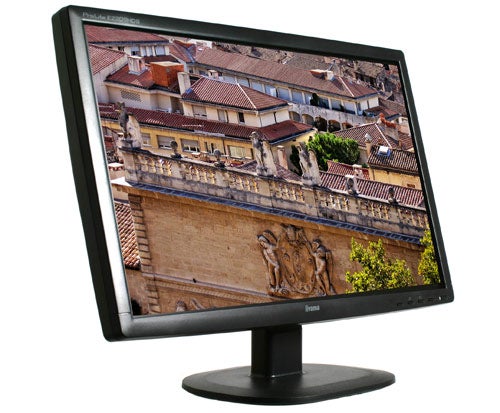 If you’re willing to sacrifice the HDMI port, for example (not an issue for those who only want a display for their PC), and want Full HD at the lowest possible price, Iiyama’s own E2208HDS has come down to about £135 since we reviewed it. A better option that retains the triple connectivity is BenQ’s E2200HD, which offers a more attractive design and superior image quality for under £150. Even factoring in the cost of a DVI cable, it’s still a better option.


Though it doesn’t offer more real estate, if you really want the two extra inches another £26 will get you Asus’ 24in VW246H, which still solidly beats the Iiyama in looks and sound if not image quality. Also keep in mind that despite its lower 1,680 x 1,050 resolution, when it comes to ergonomics and adjustability little can touch BenQ’s G2200WT currently selling for just £134.


There’s enough competition in the TN-based 22in Full HD monitor market these days that Iiyama’s E2209HDS fails to stand out. Uninspiring design combined with a price that’s just a bit higher than some rival offerings means there are better alternatives.