For those who have been around in the industry for some years the name Iiyama is evocative of quality monitors. I once visited its facilities in Stevenage and was impressed by its comprehensive testing set-up. Back in the late nineties, many of the best CRTs were from Iiyama and if a review PC came with a 17in VisionMaster Pro you knew it was off to a good start.


When the industry started to shift away from CRT it was natural to expect that Iiyama’s reputation and expertise would make its way over to LCDs but somehow it didn’t happen for Iiyama. The focus was mostly on LCD TV rather than monitors, a venture that very nearly did for it in the UK. As you can see from its web site it’s now focussing on monitors again with only three models on show – two 19in models and the ProLite E2200WS – a new 22in widescreen model. However, it’s going down the flashy headline grabbing low response time route rather than talking about quality which worries me somewhat. 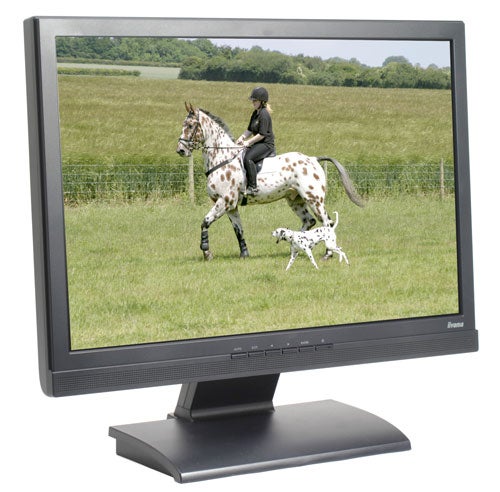 The last Iiyama we looked at was the 17in ProLite H431S which was truly excellent. This screen is a competitor for the Mirai DML-522W100. That was the first 22in in widescreen display on the market and is intended at attracting those who hanker after a 24in display but can’t quite stretch their budget to it. The Mirai is available for a bargain basement £225, while the cheapest I could find this Iiyama was £250 online. This compares to 24in screens which will cost you around well over the £500 mark. As of writing Dell’s 24in is currently going for £566.64 so you could buy the Iiyama twice and still have change.


Design wise Iiyama has kept things simple, with a plain black bezel with six equally sized buttons at the bottom. A speaker grille runs along the bottom edge. On the right hand corner is a headphone socket, which is a potentially very useful addition. However, I found that this had a background buzz whenever I plugged my headphones into it, which means I would be loathe to use it.


The base is a rather functional looking oblong plastic slab. It’s hardly high design and is a strong visual hint that this monitor is affordable. In other words, it looks cheap, but it’s not offensive. 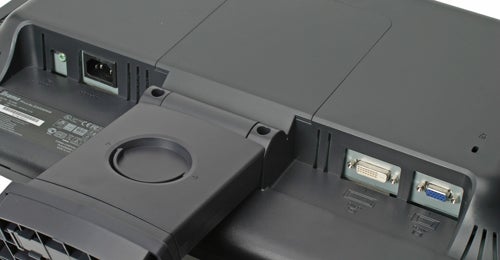 At the rear on one side is a DVI and D-Sub connector, while on the other side is the power connector and the speaker input. There’s also a cable ring, to keep those wires in check. Once you’ve attached the display to the base you can tilt it forward and back but there’s no side to side rotation and no height adjustment.


The OSD is equally straightforward but easy to navigate and you don’t have to do any elaborate finger contortions to alter brightness and contrast as you do with some screens. In fact, it’s easy – press the right arrow to bring up Brightness and press it again to increase it or the down arrow to lower it and exit to leave – and vice versa for contrast.

Inside the OSD there are options to alter the colour temperature between 9300K, 7500K, and 6500K but because of the colour cast that each of these puts on the screen I stuck with the User Preset option, which defaults to Red, Green, Blue (RGB) at 100 per cent. Inside Miscellaneous, is an option to alter the sharpness, which has five settings and defaults to 3.


On initial set up the screen was intensely bright and some toning down was necessary. In Windows I immediately could see that the Iiyama has a problem with vertical viewing angles just as the Mirai did. This is a disadvantage inherent in TN technology on which both the Mirai and the Iiyama are based. I found I had to tilt the screen very precisely to be able to see the text of my browser toolbar favourites without colour shift, at the same time as the bottom of the screen. Viewing angle to the side however, were actually very impressive. 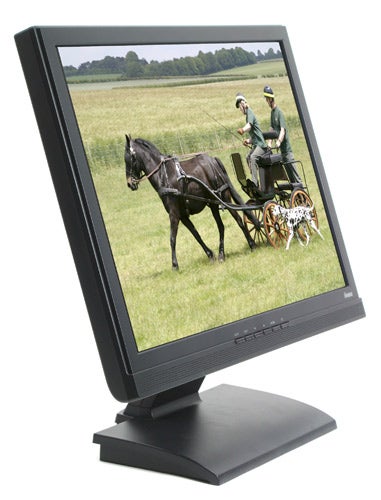 My first actual test was the demanding DisplayMate, which picked up some problems. I could detect some yellowish and greenish patches of colour in certain areas and in the colour purity tests I found that there were darker areas at the top and the sides. Generally speaking, colours also seemed quite muted.


Video performance was quite respectable. If you’re just looking for a screen that’s that bit larger for watching video then this will suffice. However, note that while 1,050 lines is enough for 720 line HD files it’s not enough for 1080 material. However, much of that will come from HD DVD or Blu-ray and as this screen is not HDCP compliant, you won’t be watching those on this screen anyway. Meanwhile the 256-level intensity test revealed some noticeable banding.

I them moved onto viewing actual images, comparing and contrasting with a Dell 2407. The Dell showed up more detail in darker areas and overall colours were more vivid, which is saying something as the Dell isn’t the best for images.


When watching moving images the smoothness was apparent thanks to the very quick response time. However, contrast levels could have been better with the picture being a tad washed out.


The final test was a bout of game playing and found that it was perfectly adequate. Colour and contrast again could have been better, but I quickly got into the game rather than worrying about it.


It does sound as though I’m being quite harsh, but I think that this stems from this being an Iiyama – I expect a lot from this brand name. Overall, image equality is good but not fantastic but it does outperform the Mirai, which is enough to justify the extra cost over it.


If you’re concerned about colour accuracy, or indeed design, this isn’t a suitable monitor. For casual though, for gaming and general office work this is a decent screen, though I would like to see a screen of this size with a better quality IPS technology.


This is the second monitor of this size and resolution we’ve seen. It justifies being more expensive than the Mirai by being slightly better. Hopefully, this sort of display will be a success for Iiyama enabling it to bring out higher-end models in the future.