Tall and slim, the Igenix Air Cooler IG9703 is easy to place out of the way when you don't want it, then roll out on casters for when you do. With sensible controls and a remote, you can control every function easily. Fan performance is excellent, emitting a steady stream of air. Turn on the water option and you'll feel a blast of even colder air. Cooling performance is a degree or two warmer than from the best evaporative coolers, but the Igenix Air Cooler IG9703 has decent range and blows out cooler air to help on a hot day.

If you’re looking for a powerful cooling fan that doesn’t take up a lot of space, the Igenix Air Cooler IG9703 could be for you. Mounted on castors for portability, yet with a thin and tall body, this cooler has the power to keep a large space cool.

Its 6l tank of water cools the air through evaporation, achieving colder air than a bog-standard fan. You don’t get the cooling power of a full-on air-conditioning unit, but this is reflected in the comparatively low price and running costs.

Igenix Air Cooler IG9703 – What you need to know

With its tall and thin body the Igenix Air Cooler IG9703 fits into most rooms, but it could do with better vertical adjustment

At 675 x 275 x 260mm, Igenix’s Air Cooler IG9703 is impressively small. And, since its glossy plastic body is a cuboid, there’s no large fan head protruding. Mounted on a set of castors, the IG9703 is easy to move around: slide it out when you need it, and tuck it away in the corner when you don’t.

On the top you’ll find all the controls you need. First, there’s a sleep timer, which can go from one hour to seven hours. Next, there’s the fan mode, which has three settings: normal (constant), natural (the fan ramps up and down to mimic real wind – a little unconvincingly), and sleep (high speed for 30 minutes, medium speed for 30 minutes and low speed after that). It’s a shame that sleep mode doesn’t also turn off the blue LED backlights to the controls. 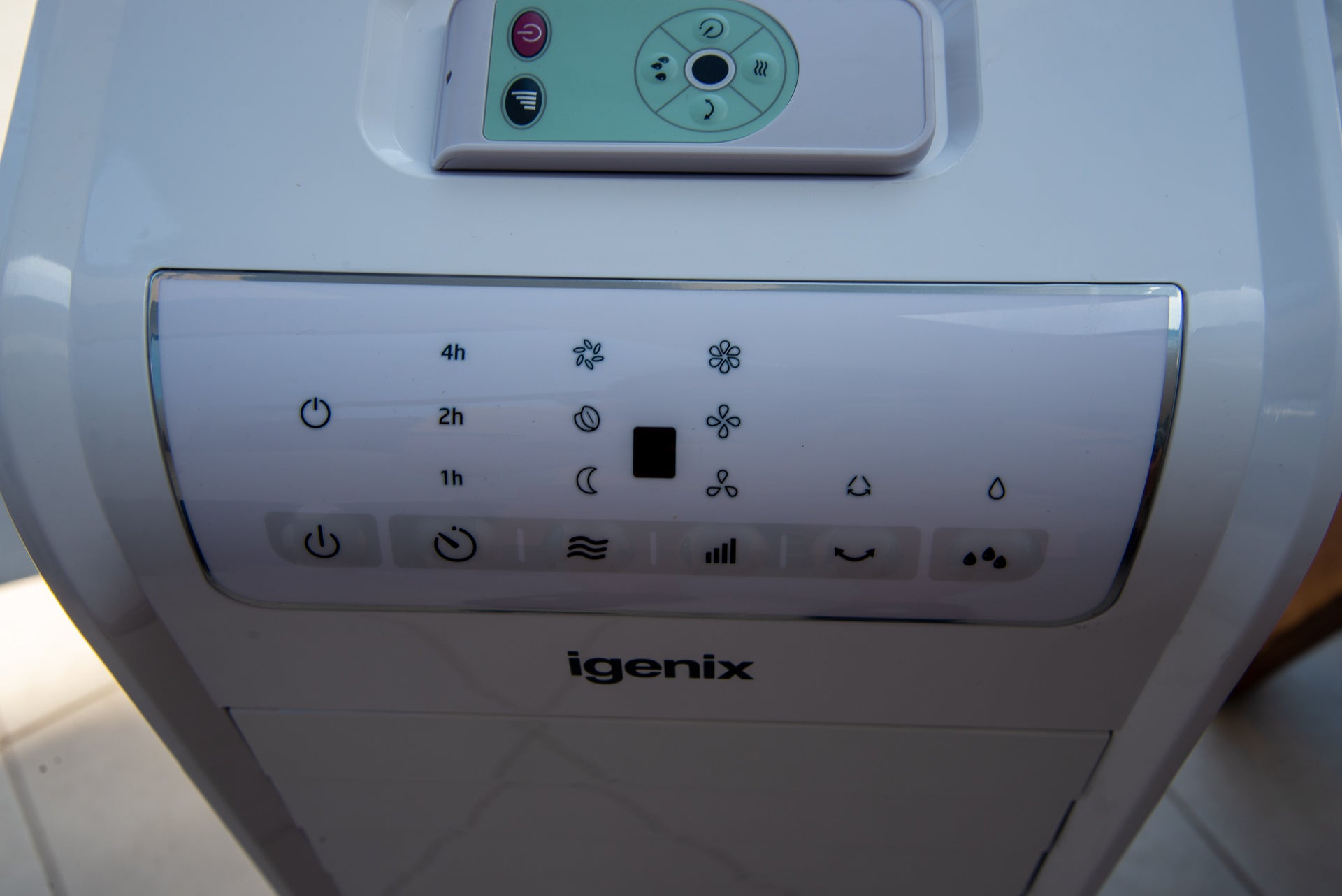 The onboard controls are replicated on the remote (stored above)

Next, you can change the fan speed, picking one of three settings. There’s an oscillation control to sweep the fins inside left to right to blow air across the room. Finally, there’s the humidifier button, which starts drawing water from the tank, providing the cooling function. All of the functions are replicated in the remote control, which can be placed in the handy recess on top for safe storage. 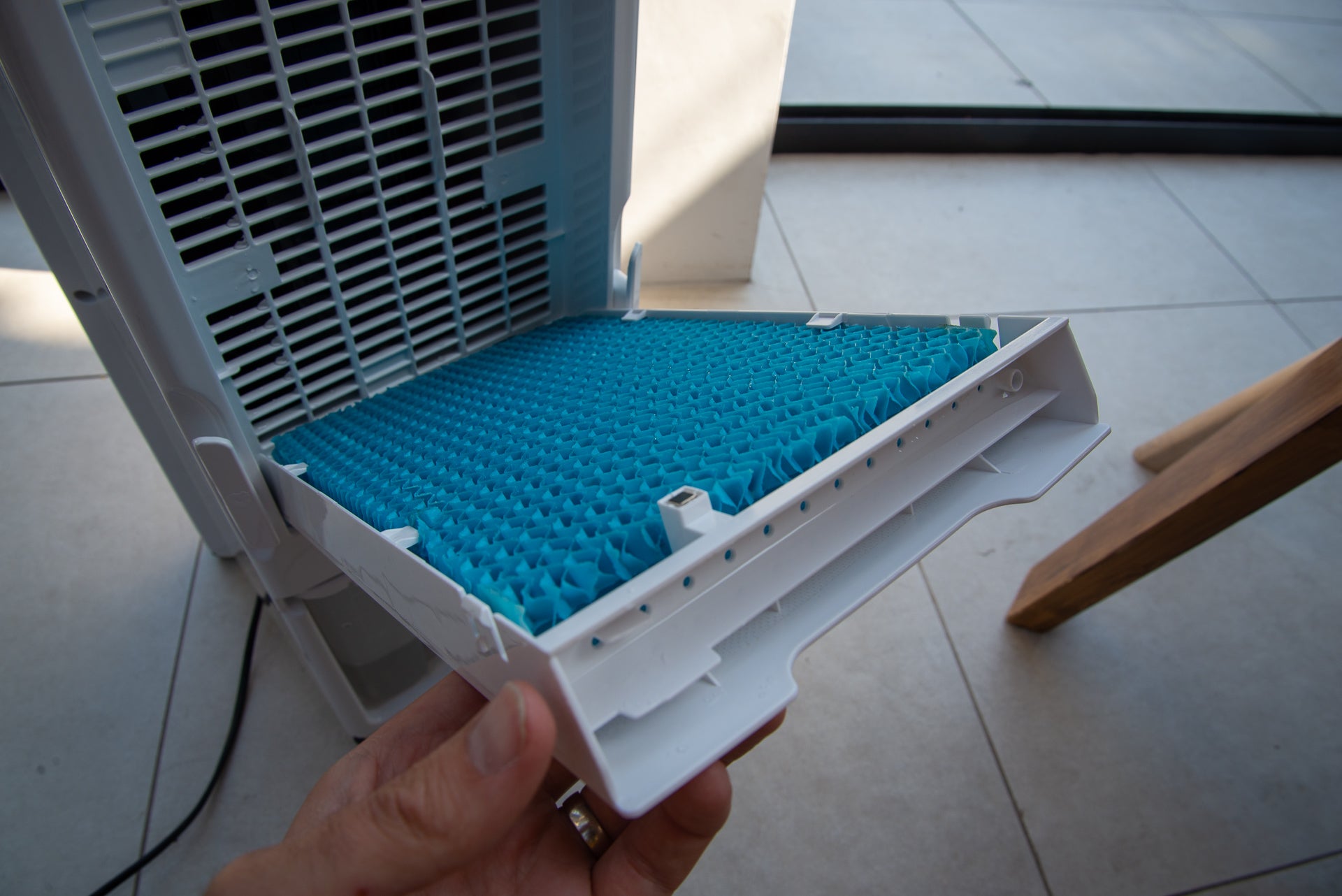 The only function you have to manually control is the angle of the front flaps, which can go from closed, so that the air cooler looks neater, to pointing upwards. A slightly steeper angle would have been nice to direct airflow higher up – although moving the cooler further back helps with coverage.

You don’t have to use the IG9703 with water; it can act as a standard tower fan. It’s fairly powerful, too. At 15cm on maximum, we measured the air speed at 5.3m/s; on minimum speed air speed dropped to 3.8m/s, which is still fairly powerful.

Sound of 66dB on max and 62.1dB on minimum isn’t too bad: the fan’s loud enough to hear but you can concentrate on doing other things. Air speed from 1m away was a brisk 2.5m/s, while minimum speed saw this drop to 1.7m/s. Sound on max was 58.5dB.

To cool the air that’s blown at you, you need to fill the 6l water tank and turn on the humidification mode. This pumps water up through the fan and drips it down through the honeycomb mesh on the rear. As air is drawn through the rear of the fan, the water evaporates and cools the air. 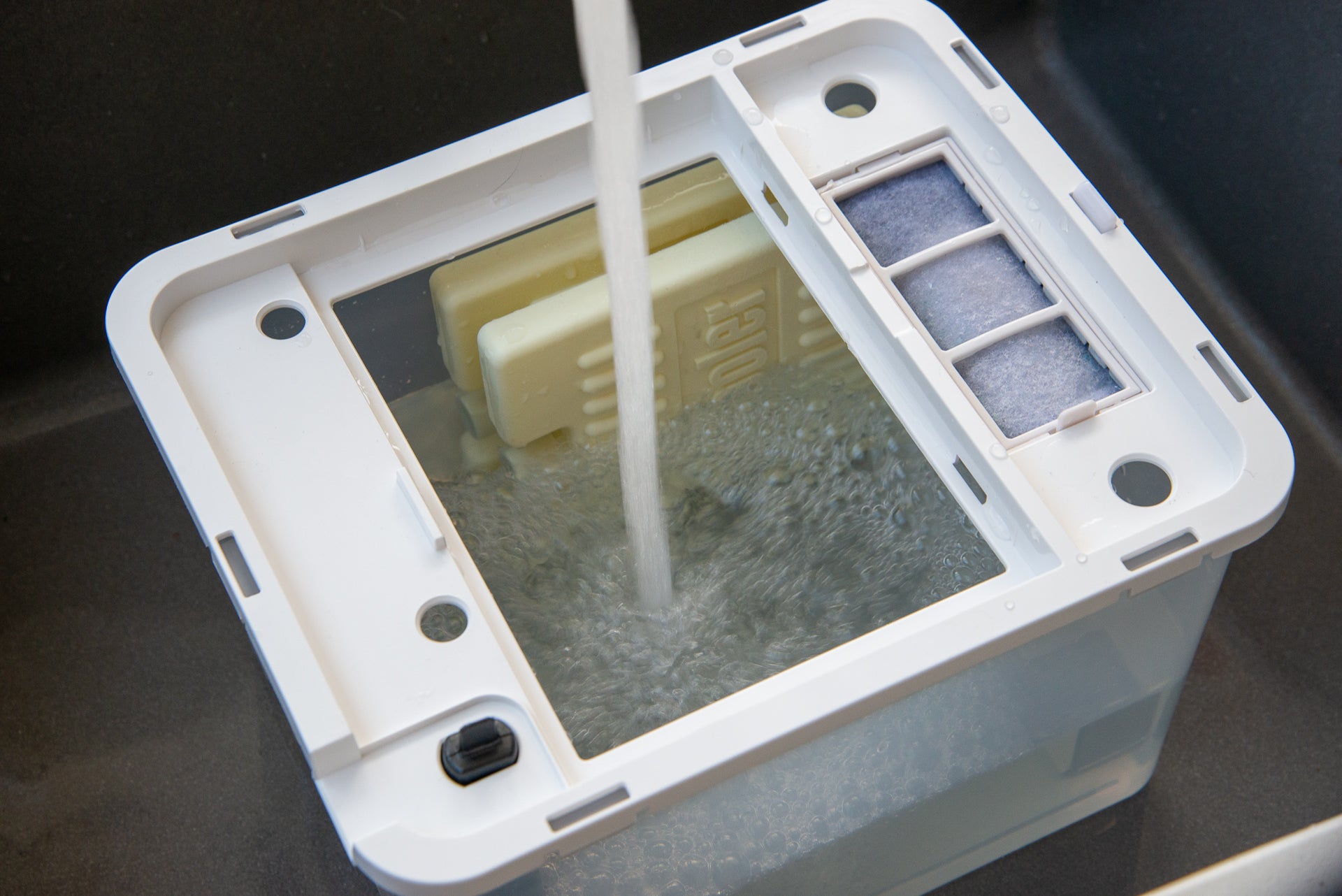 The 6l water tank is easy to fill

It’s important to point out that evaporative coolers can’t lower the temperature of your room in the same way that air conditioning can. Instead, you can get a stream of air that’s colder than the ambient temperature. You should also leave windows open to refresh the air and release the excess humidity you create. 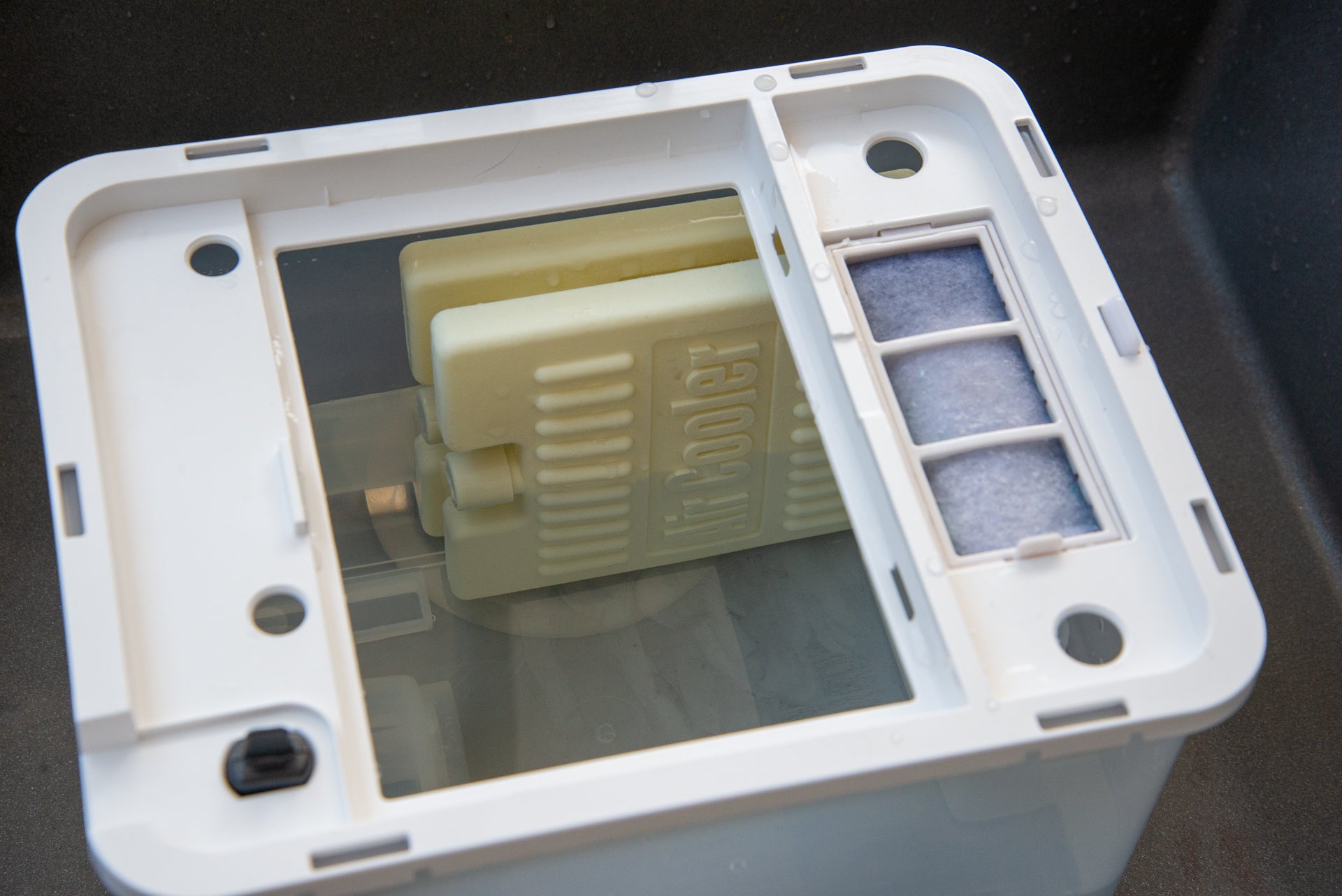 I’ve seen a degree or two better performance from evaporative coolers that blow air through the water, but with this level of performance, you get a noticeably cooler stream of air than when using a fan.

How long the 6l water tank lasts depends on the temperature and humidity and how easily the water can evaporate. Typically, I found that the tank lasted at least six hours, but could go for eight hours plus depending on the conditions. That’s typically enough for a night’s sleep or typical day’s work. 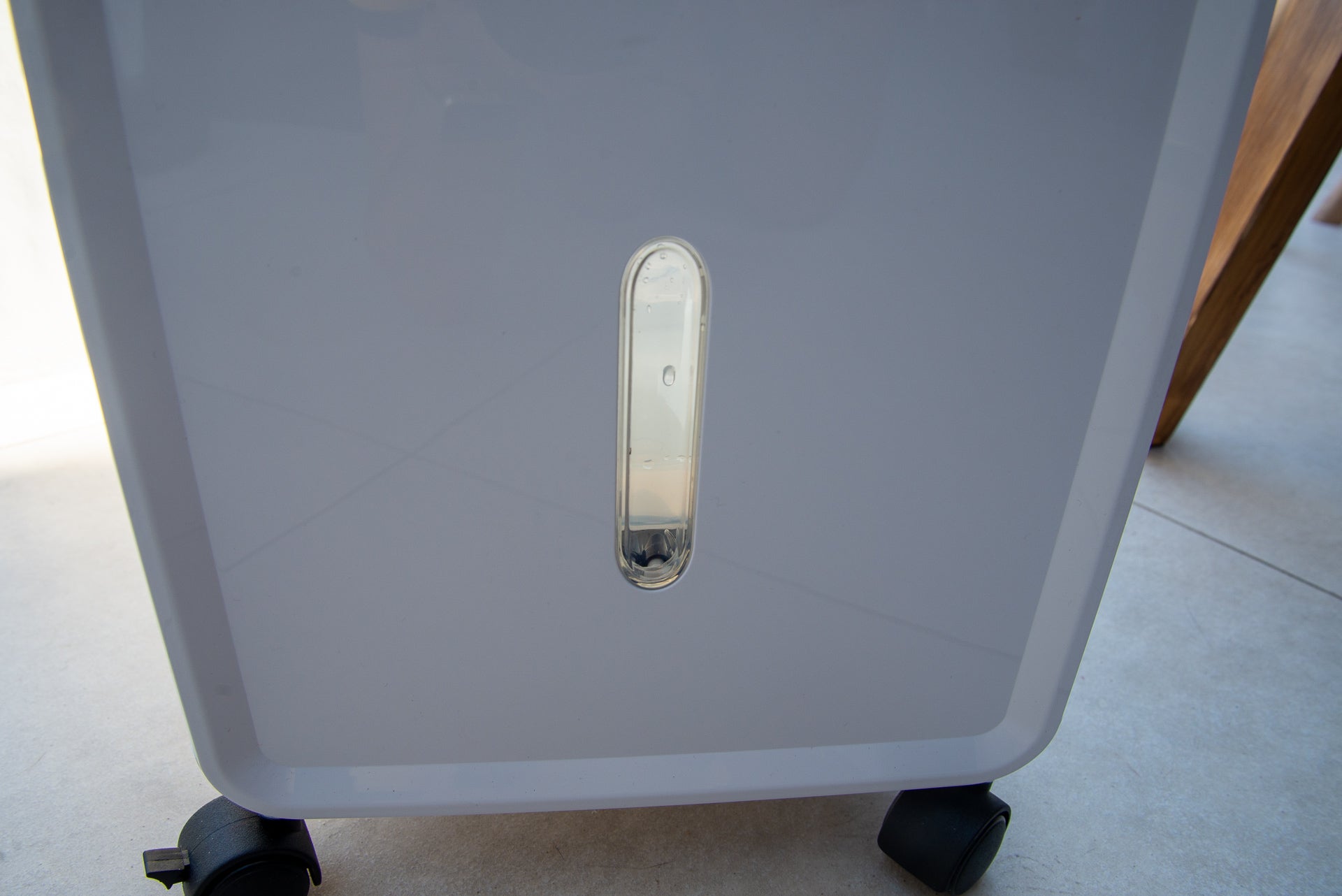 Should I buy the Igenix Air Cooler IG9703?

Don’t buy the Igenix Air Cooler IG9703 thinking that it’s a replacement for air conditioning – it isn’t built for that purpose. Although it can cool the air, performance is variable depending on conditions, and the cooling effect isn’t powerful enough to reduce the temperature of a room.

However, the Igenix Air Cooler IG9703 is more efficient than air conditioning, using just a peak of 55.9W with the fan on max and the pump turned on. It will also send a wave of air at you that’s cooler than the air temperature, making for a more comfortable environment than using a fan alone.

I’ve seen evaporative coolers that manage to cool a degree or so more, but those units are neither powerful enough to sweep a room, or small and nimble enough to easily place out of the way. If you need to lower the temperature of a room then air conditioning is the way to achieve that, but if you’re looking for a decent fan that can blow colder air at you then the Igenix Air Cooler IG9703 does a great job.