With its value-adding features and excellent operating system, Icecrypt’s T2200 was arguably the best Freeview HD receiver of last year, and since reviewing it we’ve been eagerly awaiting the PVR version. Well, it’s finally arrived and looks like a terrific prospect, boasting twin Freeview HD tuners, up to 2TB of hard-disk capacity and a superb-looking spec sheet.

The box itself is fairly large at 400(w) x 60(h) x 270(d)mm, but it’s styled in a chic glossy black finish. The focus of the front-panel is a silver-trimmed click wheel that lets you navigate menus when you don’t have the remote to hand. To its right is an easy-to-read display showing the channel number and name in large illuminated digits. On the right-hand side is a flap hiding a USB port, which was one of the T2200’s most enticing features and lets you play digital media. You’ll also see filled-in panels where the CI slots would have been, which means pay TV is off the agenda. Some of the front panel feels a little plasticky, but makes up for it with sturdy metal casing elsewhere.

On the rear panel is an excellent array of connections. You get two Scart sockets, enabling you to feed pictures to a recorder and TV simultaneously, plus the all-important HDMI output and a composite video output. On the audio side, there are analogue stereo and optical digital audio outputs, while an Ethernet port provides a way of getting IPTV services as and when they become available. This also lets you transfer music and movie files onto the T2400 over a home network, although you can’t stream your files. A second USB port is provided on the back as a further multimedia option and there’s an RS232 port for software upgrades. 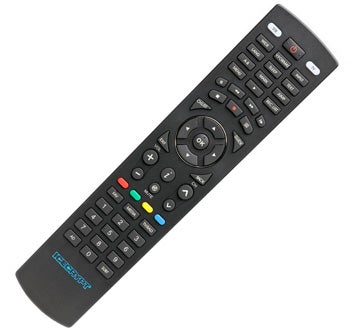 Despite its unpleasant, clicky buttons, the remote’s layout is reasonably user-friendly. The menu controls are comfortably placed in the middle and every button is clearly labelled. A little more prominence should have been given to the playback and record buttons but generally this handset poses few problems for day-to-day operation.

The T2400 is available with a 500GB, 1TB or 2TB hard-disk drive, offering 125, 250 and 500 hours of HD recording time respectively, or double for SD programmes. The twin DVB-T2 tuners not only make it possible to watch one channel and record another, but also to record two channels and watch a third, which is a rare talent and a real bonus with so many channels to choose from. 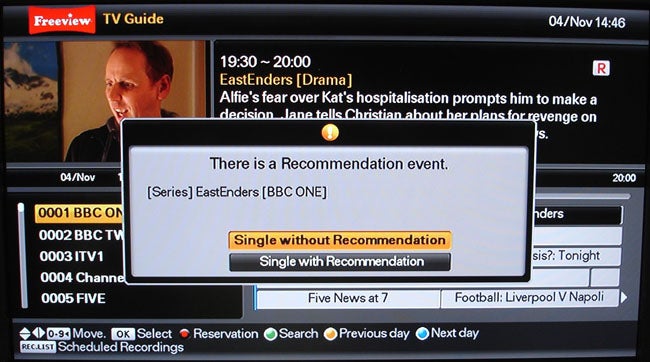 And there are plenty of recording features to play with too, designed to make your life easier. There’s series recording, which is offered as an option when you pick a programme to record from the EPG, as well as recommendation recording, where the box makes suggestions related to what you’re recording. 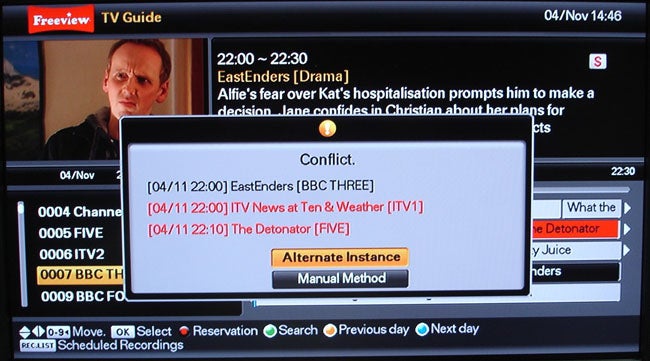 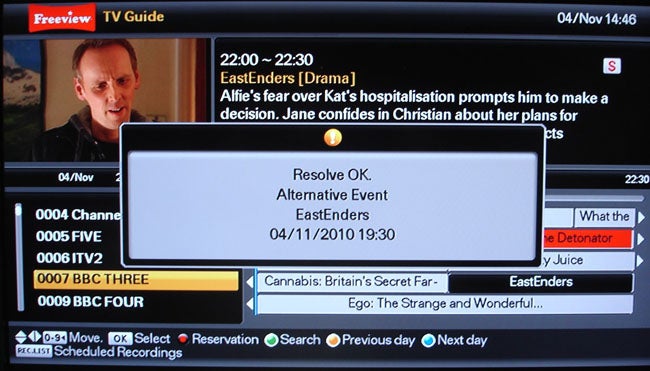 Trailer Booking, meanwhile, lets you set recordings during the adverts for forthcoming programmes. When you try and schedule recordings of more than two programmes being broadcast at the same time, the Alternative Instance feature automatically finds other showings. If there are none, you have to resolve it manually. 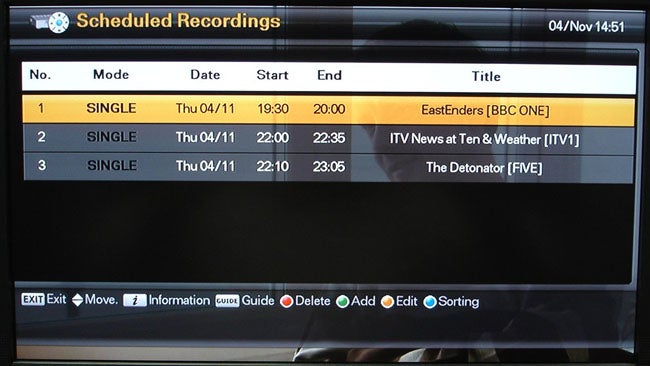 Another key feature that sets the T2400 apart from many of its rivals is MP3 and DivX playback. You can transfer these onto the HDD from PCs over your network or play them from connected USB drives. 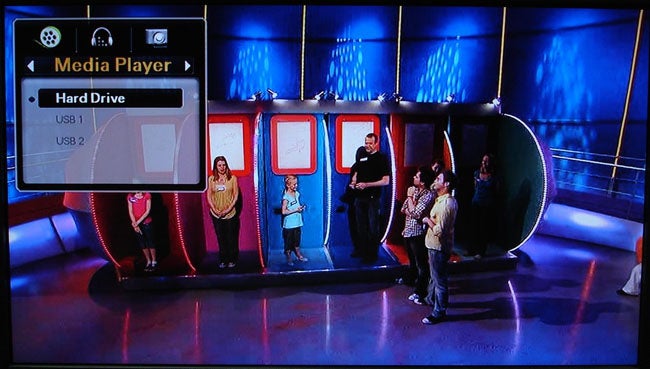 Using the T2400 is a breeze. The onscreen menus are fantastic, using modern-looking, full-colour graphics that make everything very easy to digest. The setup menu takes an unusual approach, allowing you to scroll along a row of icons and browse the little submenus. It’s intuitive when using the remote, but cumbersome using the front panel controls. 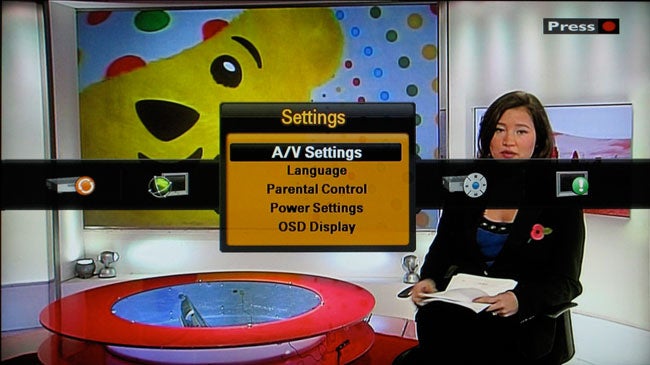 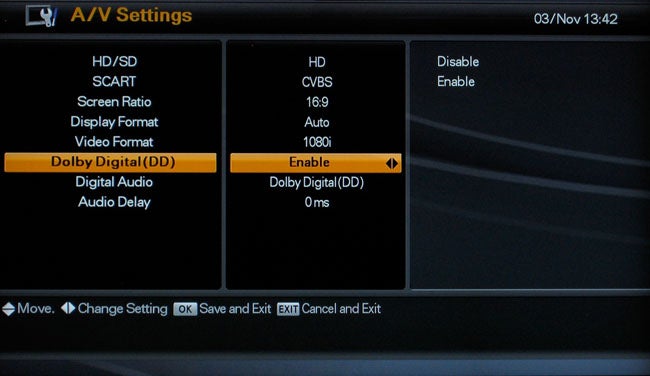 The eight-day EPG is particularly attractive, playing live TV in a box at the top of the screen and showing the programme synopsis without having to hit the ‘i’ button. The downside of including these is that the programme grid is very small, showing only five channels at a time and squashing up the ‘blocks’ so you can’t read the full names – although you can switch between a one, two or three hour view. A helpful legend at the bottom provides a permanent reminder of the various options, which includes the ability to switch to a single channel guide or skip forward/back a day. 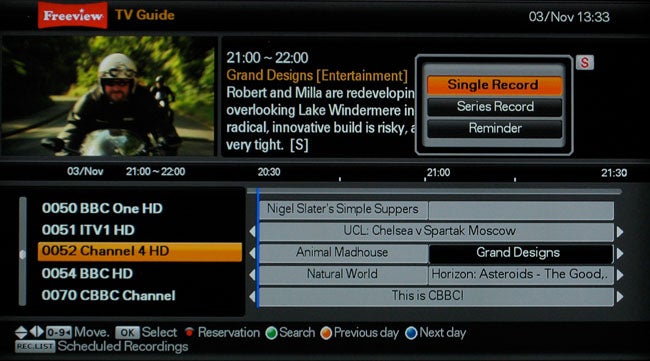 This is backed up by an great-looking info banner. Press the i button once and a yellow bar pops up with cute icons giving details about the current programme – resolution, audio description, MHEG and so forth – as well as the signal strength. Press ‘i’ again and the synopsis appears above it. The crisp fonts and 256-colour display may look good, but it’s a real shame that you can only browse now/next information, not the entire schedule. 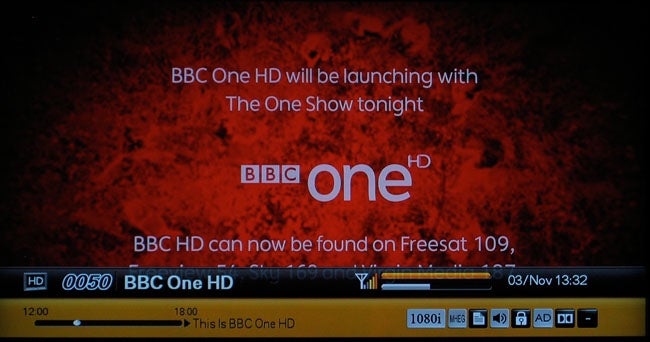 The recording list is clearly laid out, presenting content in a straightforward list with no thumbnails, indicating whether or not programmes have been viewed and allowing you to resume an earlier viewing. And when playing back programmes you can repeat, remove or copy a portion of the recording using the A-B button. Other neat tricks include pause live TV and a Time Shift function. 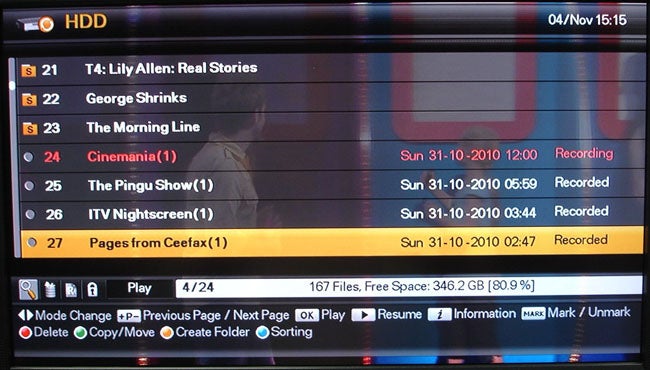 Elsewhere a handy mini menu lets you set the output resolution (up to 1080p), aspect ratio and audio mode. The T2400 will not currently transcode HE AAC into Dolby Digital in order to improve surround sound compatibility with legacy receivers, but Icecrypt’s distributor Turbosat says this will be added later with a software update ‘once Freeview confirms this is the broadcast format they are sticking with’. The unit is compatible with Dolby Digital Plus.

Picture-wise, hi-def channels like BBC One HD and ITV1 HD obviously show the T2400 in its best light. Watched live, the newly HD-ized ”EastEnders” looks stunning, boasting crisp, almost life-like images – half an hour of people shouting and crying has never looked so clear. You can marvel at Kat Moon’s caked-on make up, examine how Phil Mitchell’s comically brief crack addiction affected his face and watch Tracy wordlessly serve Queen Vic punters in the background with even greater clarity.

Standard definition programmes like ”The Chase” on ITV1 also look fine. The bright studio colours look forceful and vibrant, while the variety of contestant skin tones look natural. There’s more shimmering in the image than you get from HD channels, but it never becomes intrusive.


When recorded, the competent video encoders ensure that HD programmes lose none of their crystal clear definition and SD programmes look solid too. You can’t drop the bitrate to lengthen recording time, but with such a capacious HDD on board it’s not an issue.


We didn’t encounter any problems with MP3 or DivX playback from USB sticks either and TV programme audio is as clean and audible as it gets, no matter which output you opt for.


The T2400 is an excellent Freeview HD recorder with the sort of feature list and user-friendliness that most buyers are looking for. We love the generous connectivity (particularly the two USB ports), the attractive onscreen displays, the huge hard-disk capacity, the flexible recording/editing options and digital media playback. It’s denied must-buy status by virtue of its limited info banner, remote build quality and overly busy EPG, plus the price tag is fairly hefty, but if you can put up with these and have the money, the T2400 is a terrific choice. 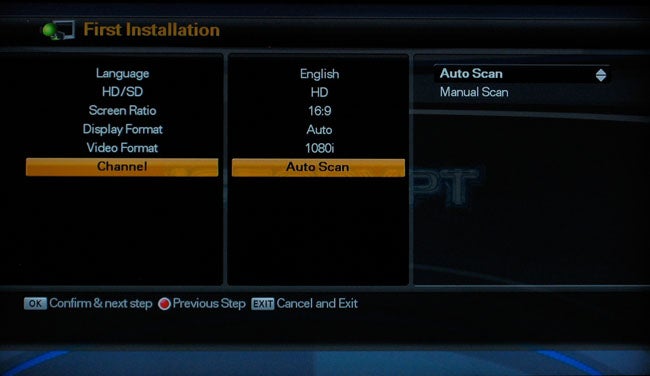 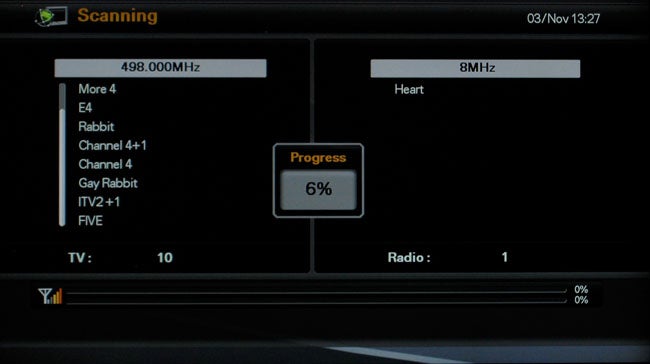 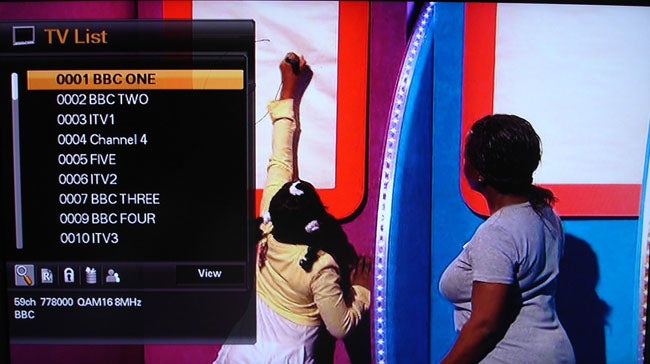 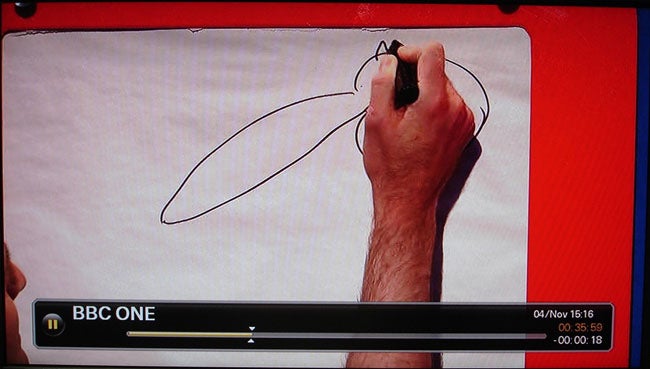 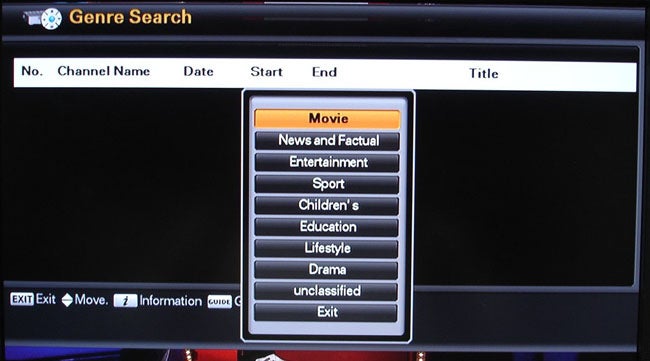 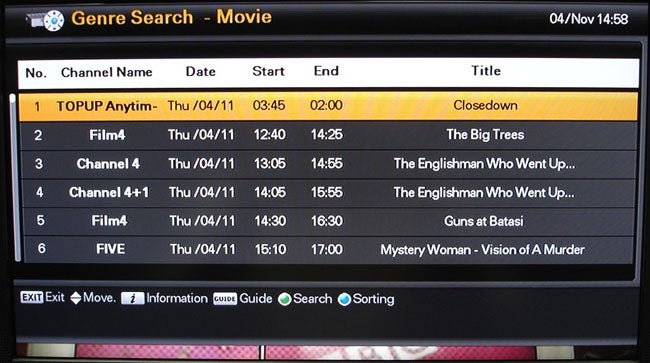 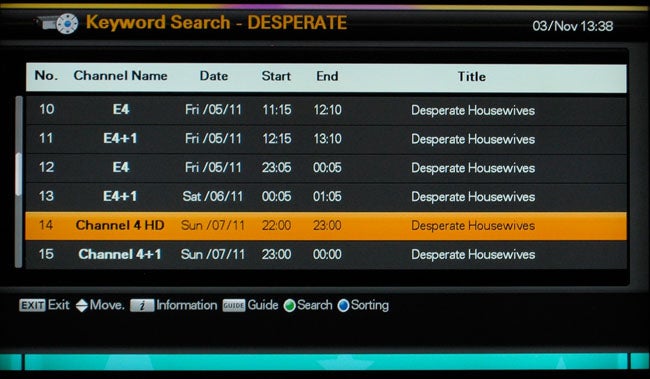 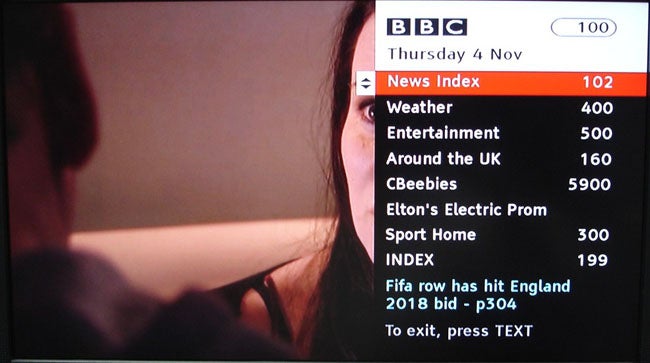 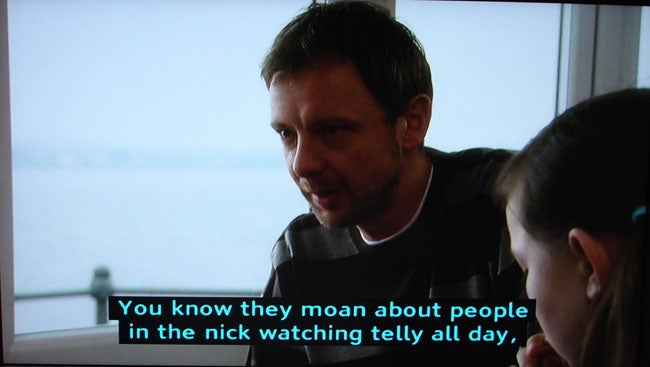