Out now for Android devices

I See Ooo is a couple of mini-games that are tied together with a plot that’s almost as silly as an episode of the Adventure Time animated TV show. There are unlockable power-ups, challenges and multiple levels for each of the games. More importantly, the game is voiced by the cast of the show, plus you get to hang out in the treehouse with Finn, Jake and the rest of the gang.

The whole experience is in virtual reality, thanks to a great-looking custom Google Cardboard headset that’s supplied with the game. It isn’t as comfortable as a Samsung Gear VR, but it works fine if you wear spectacles and, given that it’s so cheap, it’s a great way to test VR for the first time. The headset comes with a code that lets you download the game for free. 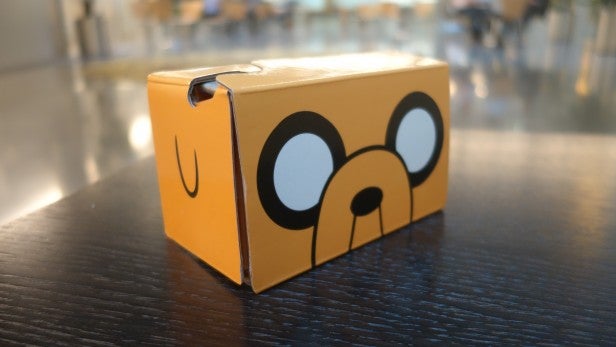 The first mini-game is a snowball fight with penguins. You target the penguins by looking at them for a second and then a snowball is automatically thrown. All the while, the sinister penguins creep towards you and will attack if they get close enough.

It starts off incredibly simple, but then airstrikes, armoured penguins and penguins that throw snowballs back begin to appear. You need to hit a minimum score to unlock special weapons and upgrades, so it becomes unexpectedly tactical and quite tense. Those penguins are evil and surprisingly adept at sneaking up behind you when you’re distracted or looking the other way.

The second game is a flight simulator. You’re in a glider (with engines – so a plane, really) that has to fly through the mountains where the Ice King lives, while avoiding dark clouds and flying through hoops. Gnomes will begin to appear to annoy you, and enemies try to crash into you.

It isn’t as tense as the penguin snowball fight, but it offers a nice change of pace. Occasionally, you’ll fly inside a mountain, where the glider/plane magically no longer requires a gust of wind to work. It’s very easy to crash the glider (OK, plane – it’s totally got engines) when you’re inside the mountain.

Unlockable items and challenges give both games longevity and provide an opportunity for the charm of the Adventure Time world to work on you. You’ll find yourself humming the theme music, and wondering about new strategies to try next. 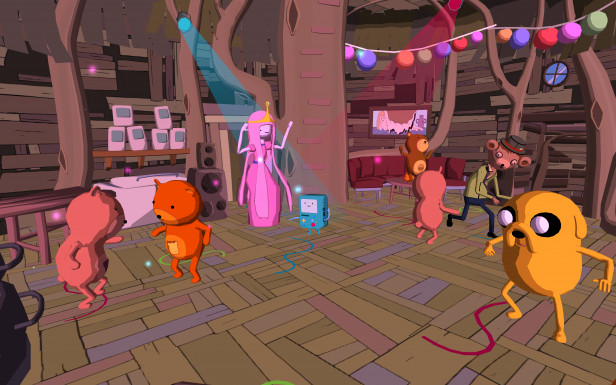 There are some issues. It has parental controls to limit playtime without breaks, but the parental control is in the form of incredibly simple maths. For example: “what is 2 + 4”, which feels like the sort of maths that the target audience could solve pretty easily.

At first I couldn’t get the game to work on a Samsung Galaxy S7 – the large screen was throwing out the 3D so much that it didn’t work. But I just needed to update the viewer with a QR code and it worked fine after that.

The cartoon style of the show translates nicely into 3D. The earlier Adventure Time VR game – Magic Man’s Head Games – was also nice to look at, so these guys have form. The supplied headset looks amazing and fans will proudly display it long after they’ve finished the game.

If you’re looking for a present for an Adventure Time fan, and they have a phone that’s compatible with the game, this is an easy recommendation to make.