Many people wonder why they should buy a separate TV and monitor when buying 32in or below. After all, many monitors – like the Dell UltraSharp 2408WFP – come with many inputs that allow you to hook up consoles, DVD and Blu-ray players, and other AV gear; while with an actual HD-ready TV, the resolution will be too low for varied PC use in many scenarios. So why go for a small TV at all? Well, apart from often superior picture processing, there’s SCART (an outdated and inferior but tenacious connection), TV-tuners, and that wonderful piece of technology that turns us into couch potatoes, the remote.


So what’s the ideal solution? Why, combining the two, of course, which is exactly what Hyundai is offering with its 22in BlueH HM22D LCD TV monitor. After its rather impressive Hyundai W241D PVA monitor, we expect good things from the company, so let’s hope this model matches up. 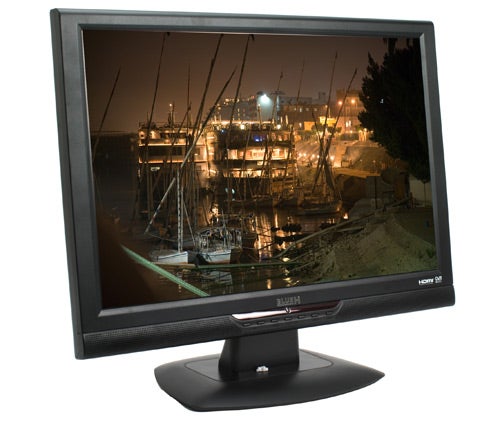 Unfortunately, the first thing that struck me about the HM22D was that it is rather unattractive. The entire monitor is finished in matte black. Now I’m not suggesting that a non-glossy monitor is inherently less attractive, as the Dell 2408 proves, it’s just that this implementation looks somewhat dull. It doesn’t exactly sport clean lines either: in this time of hidden speakers, there is a narrow but visible speaker bar running along the bottom. Let’s hope, then, that it manages to produce some halfway decent audio.

Perhaps I’ve been a bit harsh on the monitor’s looks until now, but there’s one design-choice I simply cannot forgive, concerning the small LED and bar set just above the controls and between the speakers. Whoever had the brilliant idea of putting a blue power LED in a small transparent surround, set in a glowing red bar should be shot. Just in case no-one told them, red and blue are two primary colours that do not mix! Overall, the only people I can possibly see this kind of design appealing to are fans of old, low-budget Sci-Fi movies.


Strangely enough for a monitor that’s marketed under the BlueH name (Hyundai’s name is not even on the packaging), the LED is the only blue bit to be found, and then only when active, as it turns orange in standby – which is less offensive, if not particularly attractive. The BlueH designation actually refers to the Italian branch of Hyundai’s digital division, that designed this LCD hybrid, proving that the country that produced the Ferrari doesn’t always hit the nail on the head (as with the ugly new Ferrari California – ed.).

Assembly is effortless, merely requiring you to click the base into the rest of the monitor. It’s not quite so simple getting it apart again, but then that’s something many consumers might never have to do. However, ergonomics is another area of disappointment, with tilt as your only adjustment – though at least it’s smooth and stable. Since pivoting the monitor is not an option, you might think Hyundai would have angled the screen’s connectors outward to make it easier to hook up your equipment, much like the LG Flatron M228WD LCD TV monitor. But no such luck, meaning that swapping cables – or even getting them in in the first place – is a real chore. 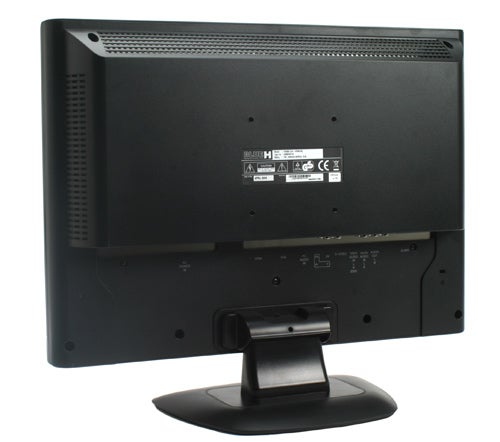 The reason I mention cable-swapping is not because I happen to have a multitude of AV gear that only the most input-rich TVs could handle, but because the HM22D only features a single digital connection, in this case HDMI. While this is a flaw that, probably due to its budget nature, it shares with the aforementioned LG, in this day and age, one digital input really isn’t enough. If you want to connect your PC properly (using DVI-HDMI, or a simple HDMI cable if your PC is new enough to have this connector), you can’t even hook up a modern console anymore without resorting to analogue.

Apart from this, you get the expected video selection of composite, component, S-Video, D-SUB and non-RGB SCART. For audio there’s 3.5mm and dual phono inputs, and a single pair of phono outs. It’s very unusual that there is no headphone socket, although you could create one using an adapter for the phono outputs. But this means that having external speakers and headphones hooked up at the same time is impossible, leading to yet more cable swapping.


Nor does the ranting end here, as the BlueH HM22D joins the 24in BenQ V2400W and Samsung SyncMaster 226cw in the hall of shame for not providing any form of digital connectivity out of the box. All you get are power, D-DUB and composite cables. There’s no CD, cloth or quick-start guide either, but a very comprehensive manual covers pretty much anything you need, despite recommending you connect your PC using analogue D-SUB.

At least the aerial socket and CI slot (for subscription channels) are easily accessible at the left hand side of the unit, and Hyundai provides a little elbow extender for the aerial socket that makes connecting it a breeze. Meanwhile, at 22cm (nearly nine inches), the remote control is very large by TV/Monitor standards. This is an advantage in that buttons are well-spaced, but though layout is good, they feel cheap and are somewhat awkwardly shaped. 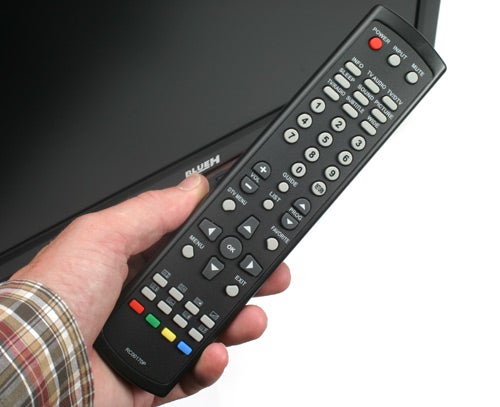 The OSD should also be easier to use than on most monitors, since the BlueH actually has up and down buttons in addition to the usual left and right (of course using the remote is easiest, but this is handy when your said gadget gets lost/chewed up by your dog/kid or runs out of juice). However, input selection is confusing. A dedicated button brings up the input menu, which tells you to use left/right arrow keys, when all the monitor has is +/- and up/down. Talking of up/down, despite the menu being presented in two rows, you can’t jump vertically from one row to the other directly, instead you have to move horizontally to the end of one row before moving to the next.


The main OSD is a relief, in that when using the remote it’s fairly straightforward. The main icons are bright, clear and large enough to comfortably see from a distance. Of course, one of the HM22D’s main features is the ability to watch digital and analogue TV without turning on your PC, and here menus are a bit less transparent. Analogue TV tuning is buried a bit, though easy enough to find. Digital, though, is not only difficult to find, but the menus we had to go into were different to the ones in the manual. Even odder, the BlueH’s Service Setup asked for a pin before allowing access. Four zeros did the trick, and once scanning completed, everything worked. 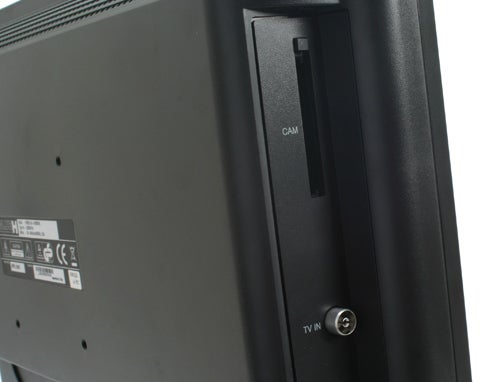 As a TV, the HM22D is fairly good for a hybrid at this price point. Compared to the LG Flatron M228WD, for example, you get a more vivid picture and slightly better detailing. But that’s not to say that most ‘dedicated’ LCD televisions won’t provide better results, as will a five-year old CRT. The reason is that you’re scaling SD content to fit a 16:10 (1,680 x 1,050) screen with a much higher native resolution than 16:9 720P televisions, and at this price point, you can’t expect a decent scaler. This means that even the potentially pristine digital BBC SD channels displayed a lot of noise, dot crawl and artefacts, in addition to mild flickering over certain parts of the image (though these effects are not as bothersome when at a distance of two metres or more). Then again, if you’re a TV image purist, you probably wouldn’t be looking at buying this screen in the first place, and for casual TV viewing, the HM22D is adequate.

It’s helped along by speakers that somewhat justify their frontal positioning. I’ve yet to hear integrated 22in monitor speakers that beat any reasonable pair of discrete units. That said, although bass is tinny at best and nonexistent at worst, these speakers go loud without too much distortion and treble is fairly well-defined with some nice depth. 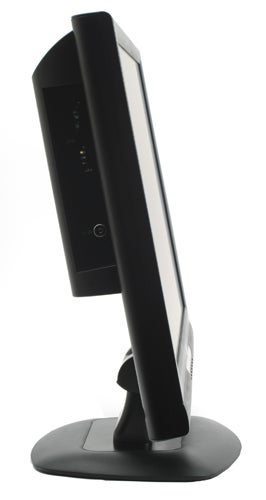 When it comes to monitor use and overall image quality, the BlueH actually performed far better than expected. Though vertical viewing angles are nothing special, horizontal ones are impressive for a TN. The display distinguished quite well between various dark grey tones, with no sign of dithering on close inspection. Backlight was also mostly even, though there is some noticeable bleed from the bottom. Finally, after a bit of correction to balance some red dominance, colours were passably good. The only thing marring what is a surprising performance given this display’s price and intended market, is strong banding across both colours and greyscales. 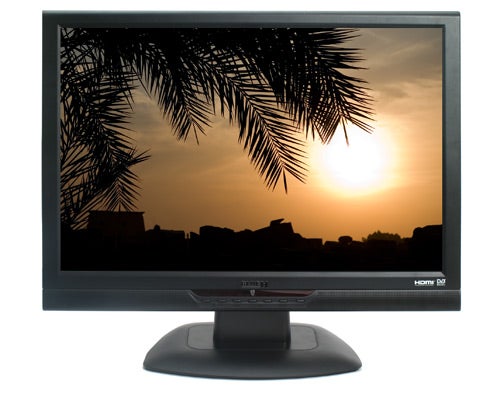 A quick aside: Samsung’s new T HD-series of TV monitors (we’ve reviewed the non-hybrid Samsung T200 here), like the 22in T220 HD, offer far superior design and three digital inputs (two HDMI and one DVI) for only around £40 more. Of course we can’t recommend them until we’ve run one through the TR gauntlet, but it’s something to keep in mind.


It’s not overly attractive, only offers a single digital input, sports an occasionally awkward OSD and a huge remote, but the BlueH HM22D LCD TV Monitor is a decent enough bit of kit for the money. If you’re on a budget and looking for a monitor that can handle casual TV viewing while letting you work and play on your PC, this hybrid’s worth a look.