Exclusive to Nintendo 3DS
Curb your enthusiasm, Zelda fans. Sure, we all know that the Zelda series has yielded some of the 3DS’s finest games, with the likes of Ocarina of Time 3D, Majora’s Mask 3D and A Link Between Worlds, while even the multiplayer spin-off, Triforce Heroes, wasn’t bad. All the same, Hyrule Warriors: Legends is an attempt to rebuild and revamp 2014’s Wi U Dynasty Warriors mash-up for Nintendo’s handheld system, and it’s not like the original was all that great. Beefed up with new characters and content, can Legends transform Hyrule Warriors into a must-have, or are we on track for another damp squib?

Well, this isn’t is a bad conversion. The characters and monsters have lost a little of their lustre, while the various stages were never that much to look at, anyhow, but Hyrule Warriors: Legends manages to cram impressive numbers of Stalfos and Moblins on the screen at once, then lets you scatter them like ninepins with a range of brutal smashing, slashing moves.

Poor draw distances and the occasional sudden appearance of a whole platoon hint that this is all a bit much for the 3DS’s hardware, but a cel-shaded effect helps conceal a lack of texture detail, and even the big boss monsters look pretty good. This isn’t the 3DS’s finest hour, but it carries a demanding game well. Note, however, that we reviewed this on the New 3DS, not the previous generation 3DS or 3DS XL. Your mileage may vary depending on your model. 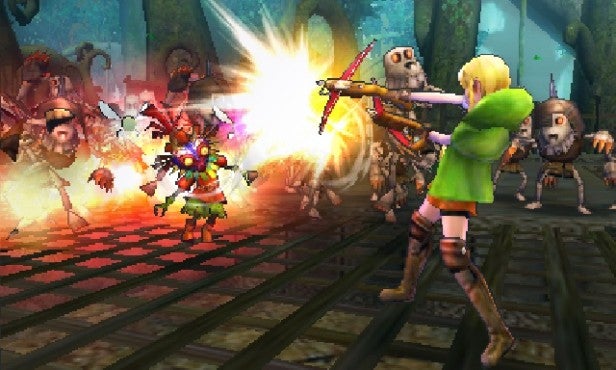 What was good about Hyrule Warriors remains. It’s still effectively a Warriors game in a Zelda skin, with Tecmo Koei handling the majority of the design and coding, with gameplay focused on the Warriors series’ mass-scale battlefield combat. The battlefields themselves might be set in iconic Zelda locations rather than feudal Japan, but this is still a game where you’ll fight as a familiar Zelda hero, cutting a family-friendly, blood-free swathe through hordes of monsters. Combat? Yes. Adventure and exploration? Not so much.

All the same, there’s room for an all-new Zelda story, a decent cast of favourite characters, some impressively huge boss and mini-boss monsters and a solid complement of classic gadgets, including the hero’s bow, fire staff, bommerangs and bombs. Inevitably, any game that mixes elements from Ocarina of Time, The Twlight Princess and Skyward Sword struggles to make it all cohere, but for the most part Hyrule Warriors does a reasonable job.

There’s more depth than you might expect as well. Like every Warriors game what starts off looking like a dim-witted brawler turns out to be a much more tactical affair, where you’re constantly working to prioritise objectives, ensuring that you get one of your roster of heroes to each critical turning point of the battle, just in time. And when you’re not racing from one point to another, you’re doing your best to hold off assaults and conquer the enemy keeps, which act like monster generators if left untroubled. Throw in some fairly complex systems for character and weapon upgrades and perk-administering badges, there’s plenty to get your teeth into. 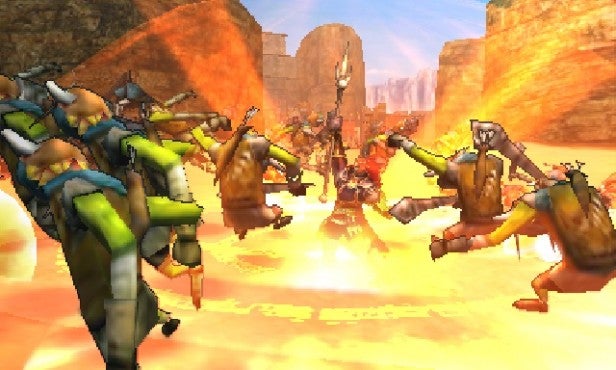 The problem is that, as in the original, it’s not an always that much fun. True, there’s something to be said for rushing around the maps, swinging LInk’s sword or Impa’s giant-sized blade, scattering the series’ most iconic enemies to the four winds. The frantic rush from objective to objective can be thrilling, plus it’s always great to see all those gadgets come into play.

And yet, there are just too many small frustrations. The maps, for example, are a little over-convoluted and confusing, making you wish that Link would ditch his trusty compass and grab a satnav instead. Simply getting from A to B can be a nightmare, and that matters in a game where you need to get someone to a key point in a hurry so that they can fight off a monster before it ravages your base.

Being able to switch heroes instantly in Legends helps, as you can pick one nearer your objective and make it there in much less time. All the same, these time-sensitive objectives are a near-constant source of hassle, while your CPU-controlled compatriots can’t be trusted to provide any real support. A new touch-based command system is supposed to make it easier to manage the battlefield, but it’s fiddly and unreliable in practice. Fail to manage your buddies or keep switching between heroes on the field and you’ll keep finding that they’re far from where they need to be. 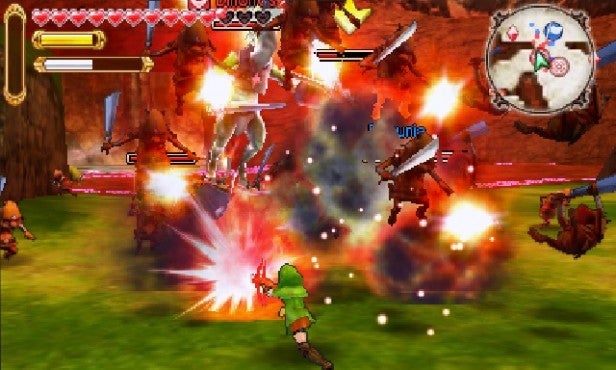 Repetition is another factor. The combat has a little room for blocks and combos, but you’ll also spend an awful lot of time mashing X and Y to bash and batter the enemy hordes, switching occasionally to the A button when it’s time to unleash your warrior’s spectacular special move. Somehow, Hyrule Warriors: Legends manages to be stressful and weirdly monotonous at the same time.

This Legends edition does throw in some new stuff, including side-missions featuring Linkle – a feminine spin on Link with the heart of a true hero – and a brand new section featuring Toon Link and the cast of The Wind Waker, Phantom Hourglass and Spirit Tracks. Sadly, while the Linkle stuff kicks in early on, you’ll have to slog your way through the original storyline to get to the Toon Link material. 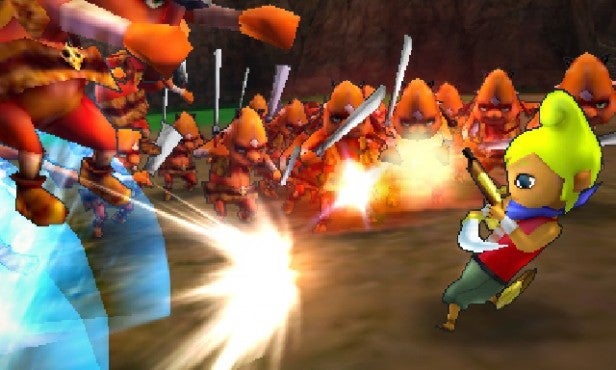 Meanwhile, the rather bizarre, boardgame meets 8-bit style Adventure mode returns with new collectible fairy powers and a huge range of challenge missions to complete. All this extra content is great news for fans – and it’s hard to fault Legends when it comes to Zelda fan-service – but does any of it fix the real issues with the game? Not really. From the flat storytelling to the battlefield action, Hyrule Warriors is only enjoyable in chunks.

There’s no reason why it has to be this way. Last year’s similar Dragon’s Quest spin-off, Dragon Quest Heroes: The World Tree’s Woe and The Blight Below, proved that you could combine Warriors-style gameplay with a much-loved property and build something polished and fun. Maybe a Hyrule Warriors 2 will manage something similar, but Legends, like the original Hyrule Warriors, falls sadly short of the mark.

Verdict
This isn’t a bad port of the Wii U original, and if you like Dynasty Warriors and love Zelda then the addition of new characters and content might be hard to resist. Yet Hyrule Warriors struggles to represent the best of Warriors or the best of Zelda, making for an awkward hybrid that’s not actually all that much fun.