Hyrule Warriors: Age of Calamity is an enjoyable action romp and a worthwhile expansion of the Breath of the Wild universe. Those hoping for a deep narrative expansion of the universe will be underwhelmed, but being able to spend more time with these wonderful characters is more than enough to leave you satisfied.

The Legend of Zelda: Breath of the Wild only ever dwelled on the past in the form of bittersweet flashbacks. Moments in time where the Champions of Hyrule enjoyed time together, forming friendships before Calamity Canon plunged their homeland into oblivion. After a hundred years, Link awoke and ventured on a quest to defeat him.

Koei Tecmo’s Hyrule Warriors: Age of Calamity expands upon Breath of the Wild’s past world and characters, acting as a canonical sequel taking place one hundred years before the masterful adventure. It isn’t the nuanced exploration of lore I was hoping for, but it remains an entertaining adventure with plenty of depth for hardcore fans.

Being able to spend more time with the greatest iterations of Link, Zelda and company was an absolute joy, even if their jovial tales of gallantry were part of a wider narrative that didn’t have the profound impact I wanted. If you’re after a solid action game for the Nintendo Switch, oozing with Breath of the Wild fanservice, this is the perfect game to round out a year of fantastic releases. 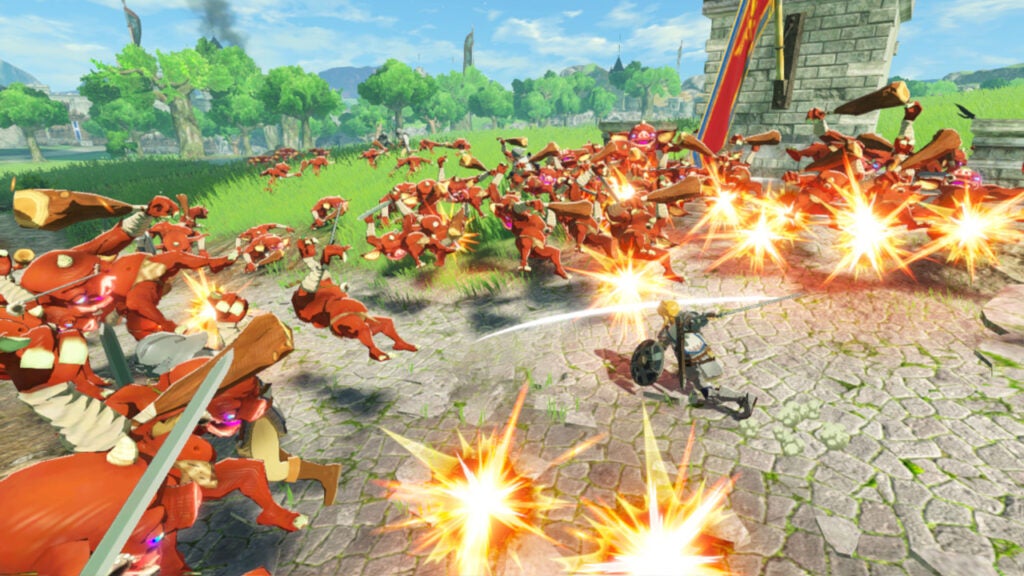 Age of Calamity begins with Link acting as little more than a regular knight of Hyrule, having yet to earn the companionship of Princess Zelda. He earns her attention upon dispatching several hundred Bokoblins in the opening mission, proving that this androgynous blonde hero is far above the capabilities of his peers. Once the first round of battles conclude, it becomes clear that a greater threat awaits on the horizon.

Together, Link and Princess embark on a pilgrimage to recruit the Champions of Hyrule. These four individuals are capable of piloting the Divine Beasts, four ancient structures that can fight back the darkness with an array of devastating weaponry. But bringing them onto your side isn’t easy, with each respective kingdom having their own problems to solve before they can help you. So, it’s time to get your hands dirty.

If you aren’t familiar with Koei Tecmo’s work, it’s responsible for the Dynasty Warriors franchise and the plethora of licensed spin-offs. The studio is no stranger to huge, epic battles, and this expertise is reflected in the brilliance of Hyrule Warriors. This is a fast and satisfying combat experience with many playable characters, all of which sport their own distinct skills and abilities that are perfect for wiping out armies of baddies. 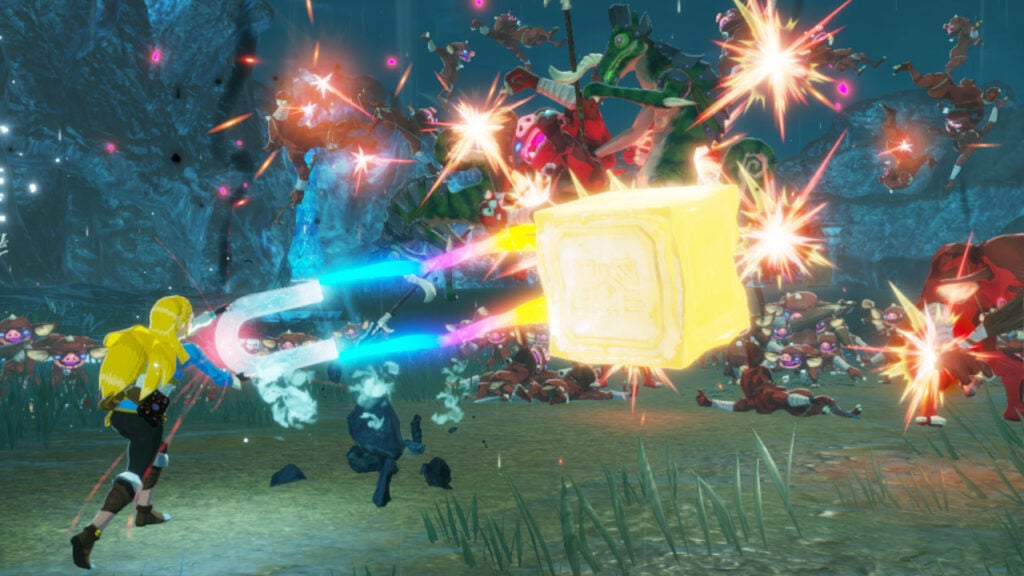 Your roster starts simple with Link, Zelda and a younger version of Impa taking the reins through the first handful of missions. They all play wonderfully, with move-sets differing just enough that switching between them feels like a necessity. Link is a swift and agile warrior, capable of dishing out plentiful sword strikes in a matter of moments. You can perform some epic combos with just a few commands, making you feel badass with little effort at all.

Wielding the Sheikah Slate, Zelda is a somewhat more timid hero, but not one you should trifle with. The princess can hurl out a selection of different elements, combining them to stun enemies in a vulnerable state before unleashing a lethal sequence of special attacks. All characters are capable of achieving such maneuvers, but Zelda’s base abilities make them far easier to pull off. She’s also adorable as heck, and easily my favourite iteration of the character. 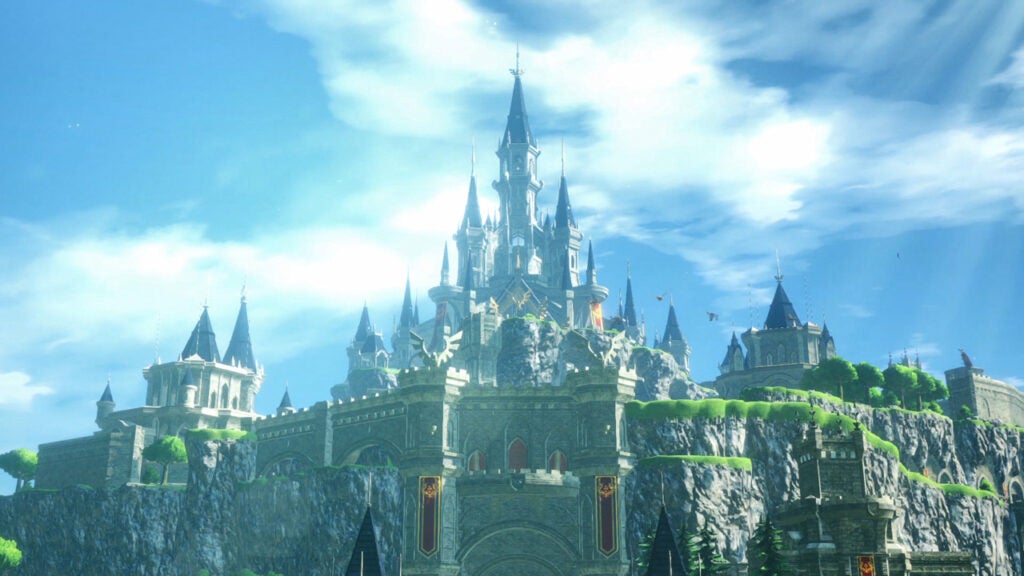 Oh yes, I forgot to mention that Age of Calamity is also home to a fair share of timey-wimey nonsense. The plot begins with an adorable miniature guardian travelling back in time, having witnessed the events that lead to the downfall of Hyrule. Since Breath of the Wild exists, it’s safe to assume that the poor thing isn’t successful in its mission.

Despite this, the narrative is an enjoyable caper through Nintendo’s world, even if it’s never quite the expansive prequel for which I was hoping. Character interactions are all delightful, with cutscenes splicing the melancholic loneliness of Breath of the Wild with a welcome aura of playfulness. The Champions of Hyrule have always been viewed through splintered flashbacks, but now we can see them banter and befriend one another while trying to save the world.

What you don’t receive is a more dramatic glimpse at the land of Hyrule prior to Calamity Ganon’s takeover, at least not until the campaign’s later stages. When the stakes become apparent, it’s a thrilling and suspenseful turn of events that I was smitten to see unfold, even if my heart was well and truly broken to see their characters succumb to their fate. Hardcore fans of the series will want to see all Age of Calamity has to offer, and for good reason. 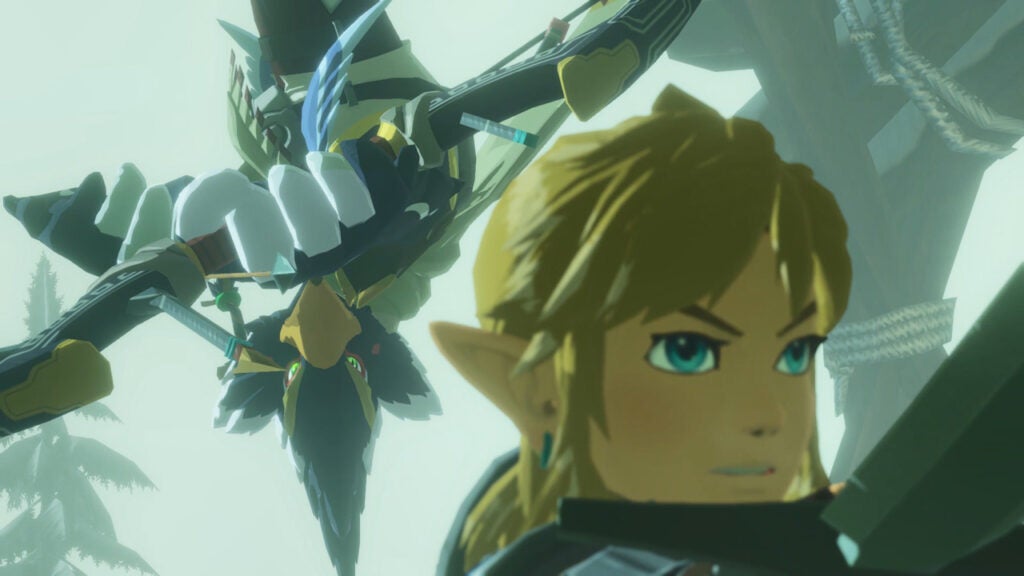 Missions are very similar to those in Dynasty Warriors. You’ll sprint across a large map filled with different enemy outposts, which can be infiltrated and claimed by wiping out a selection of powerful enemies. Once taken, foes will become less common across the battlefield, making it easier to tackle the main objectives, which often involve wiping out major opponents or protecting allies as they carry out their own tasks that are also key to victory.

Combat is inherently repetitive, a flaw that fans of the Musou genre have come to accept in the decades since its inception. The variety comes from willingly changing characters and adopting weapons outside of your vanilla loadout. I did this constantly, which made slicing through endless swarms of repetitive foes far easier to swallow. Side missions also offer more diverse objectives, acting as short bursts of action and a perfect way to level up your characters.

A vast map of Hyrule acts as your central hub area, with the landmass becoming littered with an endless array of icons ranging from unlockable shopkeepers to optional quests. As a rampant completionist, I wanted to accomplish all of them before embarking on each new chapter of the story. Some are simple skirmishes, while others require you to gather an assortment of ingredients to unlock NPC merchants or new combos and health upgrades.

It’s a fun way to expand the Hyrule Warriors experience, adding light RPG elements to a battle system that doesn’t really offer many surprises. They balance one another out, providing the campaign with a welcome sense of pacing that makes each new story quest a warm blanket to wrap yourself in. 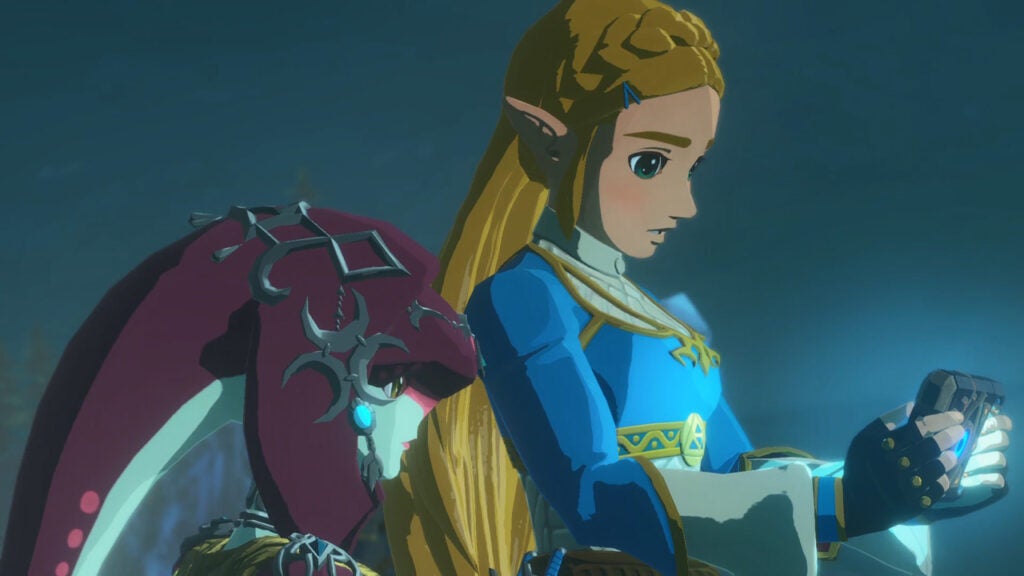 Customisation of your characters is rather extensive, but the fashionasta in me would have loved more optional outfits for all of the characters, which is sadly absent. You’ll spend most your time toying with weapon upgrades and combo systems, although it’s certainly possible that such aesthetic additions will come in the form of downloadable content. The original Hyrule Warriors was awash with such options and so, so many playable characters. Age of Calamity feels somewhat tame by comparison, likely a consequence of it existing within a singular game’s world.

Hyrule Warriors: Age of Calamity is an enjoyable action romp and a worthwhile expansion of the Breath of the Wild universe. Those hoping for a deep narrative expansion of the universe will be underwhelmed, but being able to spend more time with these wonderful characters is more than enough to leave you satisfied.

The repetitious combat is remedied by a vast roster of characters and generous upgrade system, which helps each battle feel more rewarding and satisfying than the last. Breath of the Wild 2 is likely still years away, so this is a welcome distraction until then.