What is the HyperX Cloud Revolver?

The Cloud Revolver is HyperX’s gaming headset for those who want an analogue connection and a comfortable design for long gaming sessions.

Priced at £99.99, it’s more expensive than the brilliant Cloud II, but comes with a “studio grade” soundstage and a new design. But while the headset offers some interesting features, it has too many flaws for a solid recommendation. 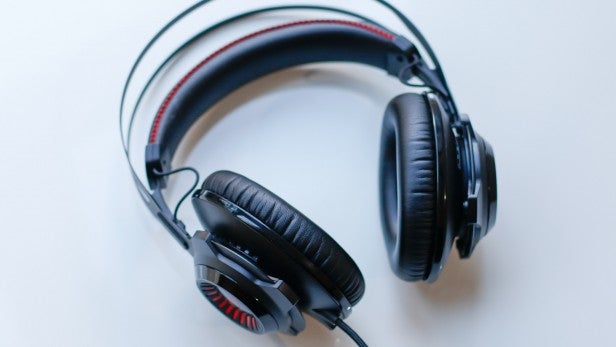 There’s no mistaking the Cloud Revolver for a standard set of cans: the black and red design revealing its gaming pedigree. It’s quite a large, so while the headset isn’t particularly travel-friendly, it should fit the largest of head sizes with ease. The Revolver comes with a meter-long, braided 3.5mm cable that enables an easy connection to console controllers and mobile devices. For PC use, the supplied dual 3.5mm cable will offer plenty of room to roam around your desk area.

The top part of the headset uses a unique system to provide maximum comfort and adjustability, with an exterior constructed from two metal bands that join at the base. Underneath the exterior metal shell is the headband, which cleverly adjusts to fit your head without any user input. It’s very soft thanks to a moderate layer of foam, which is coated in faux leather. 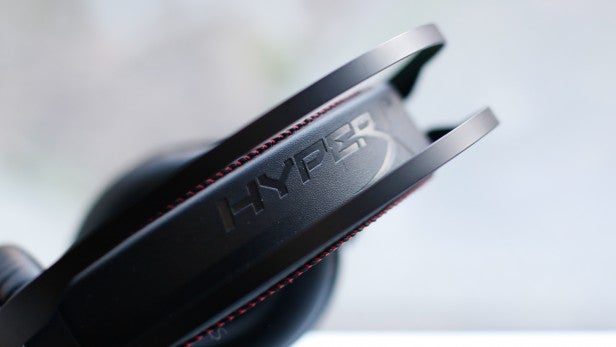 Move down the Revolver and you come to the large ear cups, which are covered in a thick layer of foam and once again coated in faux leather. HyperX branding is stamped on the sides of the headset and it’s here that build quality takes a small hit; it’s made of glossy plastic that stands out on an otherwise solid-feeling pair of cans.

The microphone is detachable, and easily adjusts thanks to its bendable design. The headset materials result in the Revolver being super-comfortable to wear, and thanks to the self-adjusting system, you’re always guaranteed the best fit. I did find myself venting my ears a little more often that I’d like, however – frequent breaks will be necessary.

The biggest flaw with the headset does come with its design, since the large metal skeleton conducts even the slightest knock into a loud and unpleasant clunk. In the real world, it translates into an annoyance on an infrequent basis, and the simple act of adjusting the ear cups can be an sour experience. This is particularly an issue if used as a pair of headphones on the go, since the entire headset will rise and fall with footsteps, which isn’t only uncomfortable, but completely unusable thanks to the friction noise conducted into headset. 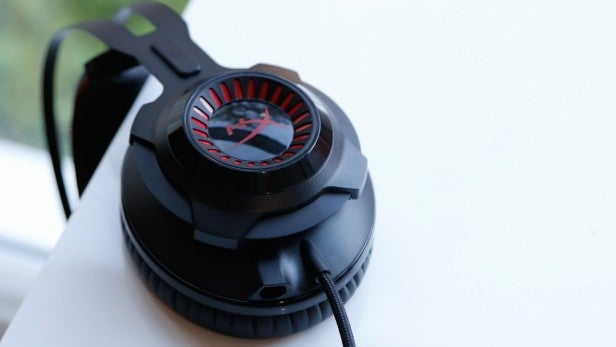 So long as you’re using the headset while stationary, the audio quality onboard the Cloud Revolver is very good. It uses 50mm drivers to deliver a punchy sound, and features a wider soundstage than other headsets in HyperX’s range . Listening to music is a real pleasure, with a nicely balanced sound signature. Low-end delivery is forceful, mid-tones are well handled, and the top-end doesn’t sound sharp. Vocal clarity could be cleaner, but overall it’s an admirably energetic sound.

The audio quality will of course be limited by your device due to the nature of analogue headsets, and my testing was run from a Galaxy Note 4 smartphone, and a high-end gaming PC. Those with weaker equipment will suffer, and this is something that wouldn’t affect the USB-connected Cloud II headset. 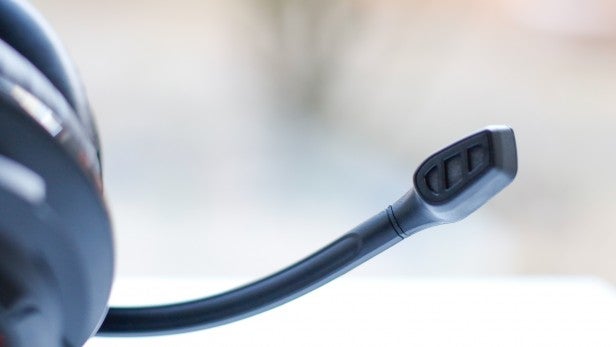 Gaming performance is stellar. Playing Gears Of War was a joy, and while the headset lacks any virtual surround tech, it does provide a pleasing degree of audio separation. I can’t say that the “studio grade” soundstage is particularly noticeable when compared directly against the Cloud II headset, but the soundstage does at least compare well against the likes of the Corsair Void and the Roccat Kave in gaming scenarios. Overall, it’s a very respectable headset for music, video and gaming applications, but it doesn’t sound significantly different to the cheaper Cloud II headset.

The microphone quality is an area where the Revolver showed signs of weakness. The first issue is simply down to the 3.5mm connector, which will pick up interference when plugged into some audio devices – the poor-quality 3.5mm jack on my test PC, for instance. Plugging into a different device may improve matters, but this is likely to affect many users, and is another reason to consider a USB headset where this won’t to be an issue.

The microphone itself does provide a well-separated sound from background noise, but the overall it’s rather nasally. For infrequent use it isn’t going to be a major issue, but regular users may want to consider something else. 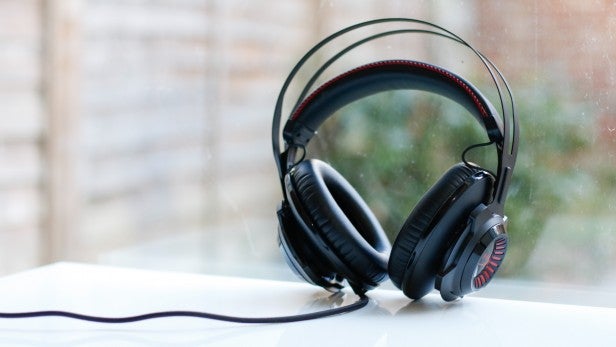 Should I buy the HyperX Cloud Revolver?

The HyperX Cloud Revolver launches as a sequel to the ever popular Cloud II. While the Revolver delivers punchy audio that handled nearly everything I threw at it, it isn’t without some notable flaws. The chief among them is the microphone, which sadly didn’t deliver in my testing.

It’s bigger and more expensive than the Cloud II, but doesn’t sound particularly better. Add in the lack of surround sound and the reliance on 3.5mm jacks, and it becomes a tough sell.

A well-specced headset that’s overshadowed by its cheaper sibling.