What is the HyperX Cloud Flight?

The HyperX Cloud Flight is Kingston’s first stab at the wireless gaming headset market. It doesn’t have the advanced virtual surround sound or flashy visuals of many other headsets in the £100 price point, but it more than makes up for this by offering an astounding 30-hour maximum battery life.

This stamina and its super-comfortable fit and stellar noise-cancelling mic make it an excellent choice for gamers who regularly take part in lengthy multiplayer sessions online. Those wanting immersive virtual surround sound would do well to look elsewhere, however. 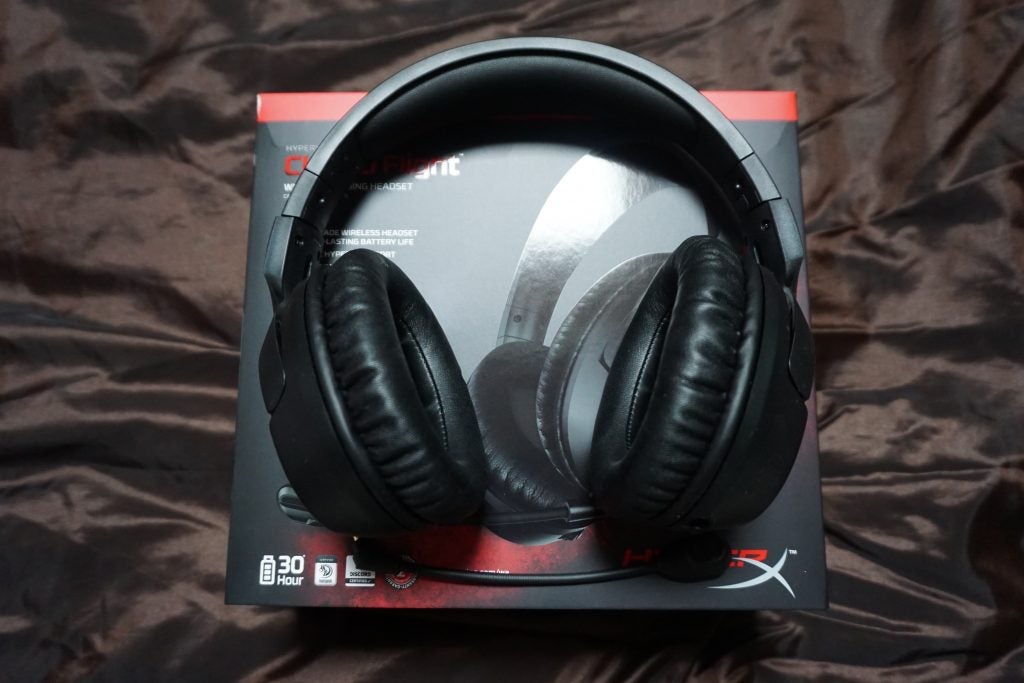 Visually, the HyperX Cloud Flight is a pretty unassuming lump of plastic. There are a few red flourishes on the otherwise black plastic frame and padding, plus a sprinkle of red LED lighting. There’s no sign of the shiny chrome, full RGB setup you’re likely to find on the more flamboyant headsets, such as the Asus ROG Strix Fusion 500.

Fortunately, the headset manages to tick nearly all the right boxes when it comes to functionality. In the box you’ll find a 2.4GHz USB receiver for connecting it to your PC or PS4 wirelessly, plus a lengthy 3.5mm cable for setting it up on an Xbox One. The noise-cancelling mic is attached using a simple 3.5mm connection.

On-board controls include basic power and chat mute buttons on the left bud, plus a single volume dial on the right. Personally, I’d have liked a separate dial for controlling chat volume, but setting the correct levels is easy enough in most in-game menus for its absence not be a huge problem.

The 315g weight (with mic), healthy dose of padding on the headband, and memory-foam ear cushions also make the HyperX Cloud Flight wonderfully comfortable to wear, even for prolonged periods. This is especially important given the headset’s key selling point – its superb 30-hour quoted battery life. Specifically, Kingston claims the headset will offer 30 hours with its LED lighting off, 18 hours in “breathing”/glowing mode, and 13 hours when permanently on. 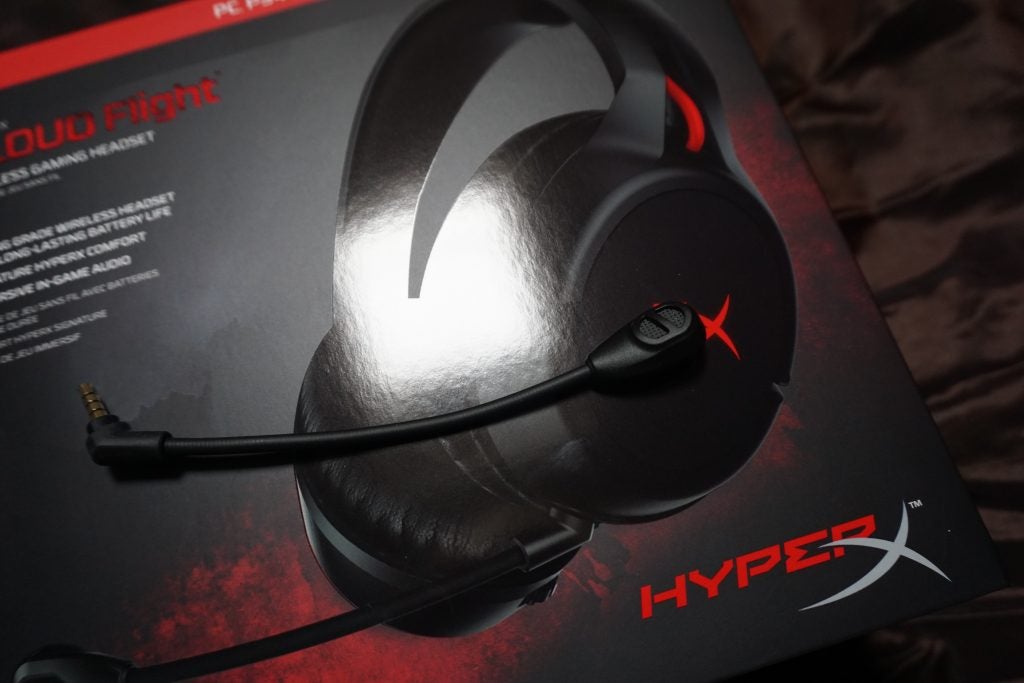 While I didn’t specifically time the headset, I found that battery life is excellent with real-world use. Even with the LED lighting in breathing mode, the HyperX Cloud Flight survived well over a fortnight’s regular use before needing a top-up. Regular use entailed an hour a day of playing PUBG during the week and two to three hours of play a day over the weekend trying to complete a Destiny 2 Raid. The battery life makes the HyperX Cloud Flight one of the longest-lasting headsets I’ve tested.

My only slight concern is that the plastic feels a little cheap compared to some other headsets at this price point. This left me concerned about its durability when travelling. Furthermore, these concerns were compounded by the fact that the HyperX Cloud Flight doesn’t come with a padded case. 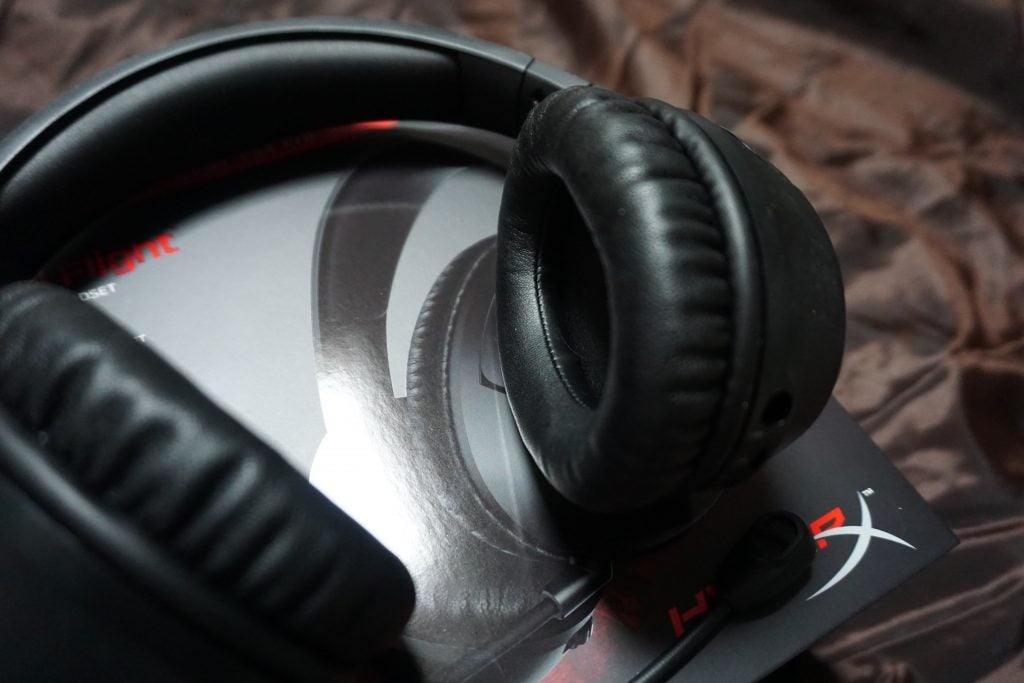 Audio quality on the Cloud Flight isn’t the best I’ve experienced, but it’s still more than good enough for most gamers.
Unlike a lot of headsets, the Cloud Flight doesn’t offer any form of virtual surround sound or Dolby certification. All you get is basic 2.0 channel audio. This will be an issue for people who regularly play games in which the direction of sounds – such as incoming bullet fire – is a big deal.

Playing PUBG, it was possible to get a vague sense of incoming sniper fire, or whether vehicles were coming from my left or right. However, getting an exact reading was tricky; the audio didn’t offer the precise sense of direction that comes from slightly more expensive cabled headsets, such as the ROG Strix Fusion 500.

Fortunately, audio quality is otherwise solid. Featuring twin gigantic 50mm drivers, the headset offers excellent, ear-splittingly loud maximum volumes and is fairly well balanced by gaming headset standards. The low end is suitably powerful, but doesn’t have the flabby feel of many competing models. However, on occasion it can overshadow subtle sounds in the treble and mid-range. For the most part, the headset represents the full frequency spectrum pretty well.

Explosions and rumbling engines sound detailed and precise, rather than a warbly mess. Gunfire is nicely attacking, but never takes on the acidic tone of many cheaper headsets. Dynamism, too, is solid, with the mix between quiet periods and intense firefights sounding suitably varied. All in all, the headset is more than good enough for multiplayer gaming.

The noise-cancelling mic is excellent. Even during heated multiplayer firefights, with multiple teammates shouting over each other, the mic did a stellar job delivering crisp voice chat to my squad. 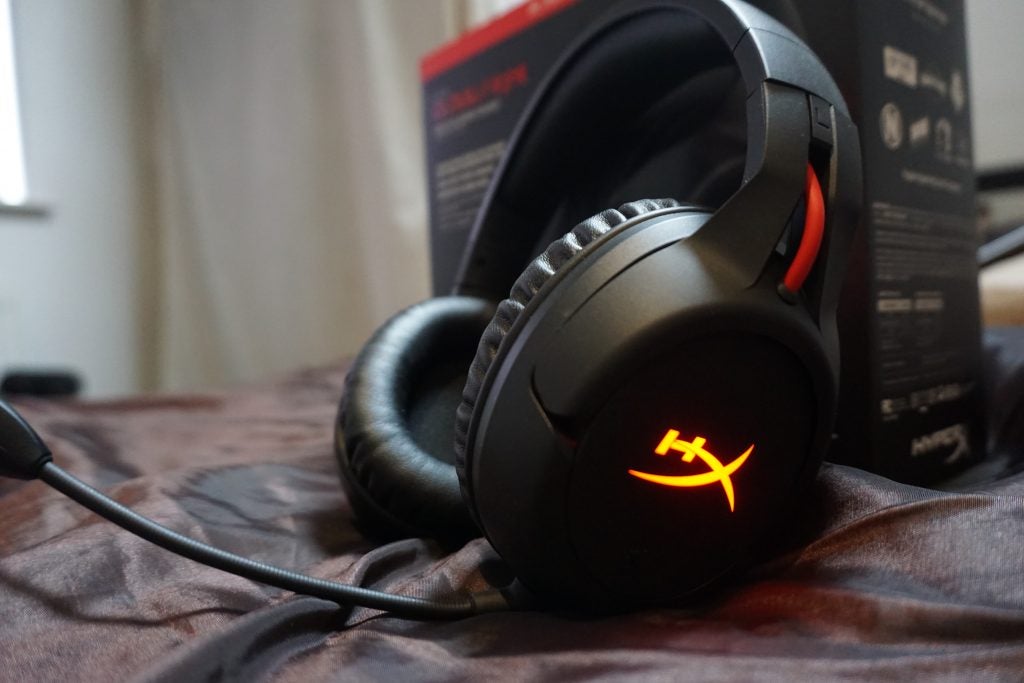 Why buy the HyperX Cloud Flight?

If you’re after a reliable wireless gaming headset then the HyperX Cloud Flight is a great choice. Featuring marathon-long battery life, a stellar mic and above-average audio quality, HyperX has done a great job designing its first wireless headset.

The only issues are its slightly dull, cheap-feeling chassis and lack of virtual surround sound, which will be an issue for competitive players.
VerdictA great headset that offers a titanic 30-hour battery life and solid audio quality.